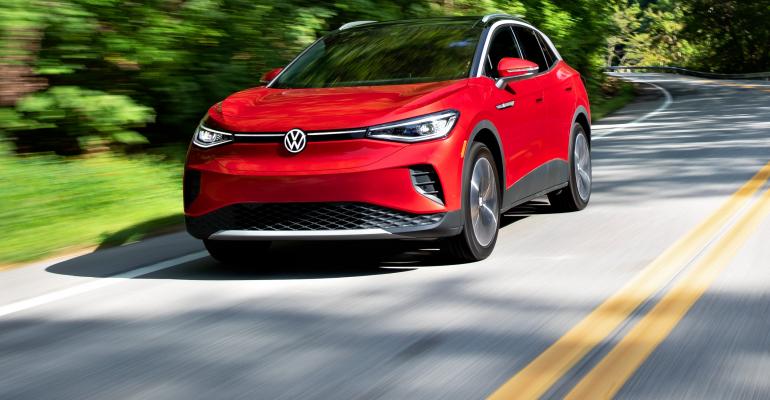 The 2021 Volkswagen ID.4 battery-electric compact CUV has been selling at a rate of about 2,000 per month since its March launch in rear-wheel-drive form. Now VW has delivered the missing piece of any SUV range: the ID.4 with all-wheel drive.

When VW put the single 201-hp drive motor in the rear of its MEB electric-car platform, it meant the 94-hp motor added to the front axle would never be the AWD version’s dominant propulsion source. Instead, the second motor improves traction, which results in considerably faster acceleration off the line. Volkswagen quotes 5.4 seconds from 0-60 mph (97 km/h), against 7.6 seconds for the RWD version. The ID.4 with AWD, in other words, accelerates off the line as fast as VW’s GTI hot hatch. 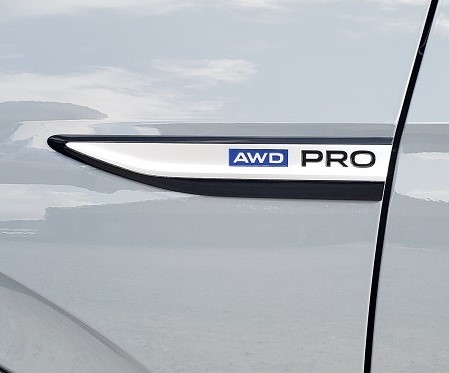 You’ll be hard-pressed to distinguish an ID.4 with four driven wheels from one without. There’s a small “AWD” badge on the tailgate, but that’s about it. The colors stay the same, the trim levels are largely identical and most people won’t notice the 0.6-in. (15-mm) increase in ride height. Similarly, you’ll have to drive the two versions back to back to notice the increased turning circle in the AWD: 36.4 ft. (11 m) versus the exceptionally tight 33.5 ft. (10.2 m) of the RWD version.

We drove three different ID.4 Pro AWD models more than 150 miles (240 km) on twisty mountain roads outside Nashville in September. It was a good reminder that battery-electric cars tend to offer good roadholding (because the heavy battery is mounted under the cabin floor) but continually remind you of their weight in turns (for the same reason).

On the road, the ID.4 AWD accelerates swiftly, but it’s far from the explosive, slam-you-into-your-seat effect of some other EVs. Stronger regenerative braking is available via the “B” setting rather than conventional “D,” but while it offers largely one-pedal driving, the driver still has to brake to bring the ID.4 to a full stop. Drive modes include Eco, Comfort, Sport, Traction and Custom, but after experimenting with Eco (slower) and Sport (a bit quicker), we left it in the default Comfort.

Designed to Be Different, not Weird

Though VW pitches it as a crossover SUV, the ID.4 resembles a high-riding wagon or a long hatchback more than it does the tall, upright utilities sold today. Perhaps the demands of lower aerodynamic drag in EVs to maximize range will lead to more human-scale “SUVs.”

The interior is clean and streamlined, with ample storage space and many functions accessed via the central touchscreen. Much has been written about the lagginess of the infotainment system; VW promises continual over-the-air updates to improve responsiveness and add features. Otherwise the interior is spacious and family-friendly, though oddities remain: Why on earth did VW delete the rear-window switches from the driver’s armrest, swapping in a separate button so drivers must toggle between front and rear, using the same two switches for both?

Just Not That Efficient

The ID.4 range simply isn’t that energy-efficient versus other EVs, especially any comparably sized Tesla. The AWD Model Y Long Range, for example, has a 75-kWh battery and is EPA-rated at 326 miles (525 km) of range. The ID.4 AWD, with an incrementally larger 77-kWh pack, only manages a range rating of 249 miles (401 km).

Our AWD test car’s digital readout told us we got 2.7 to 3.1 miles (4.4 to 5.0 km) per kilowatt-hour. That translates directly into lower range than any Tesla. A Tesla is pricier, of course, but it has more than a decade of experience in making every facet of an EV efficient. Volkswagen doesn’t, yet. 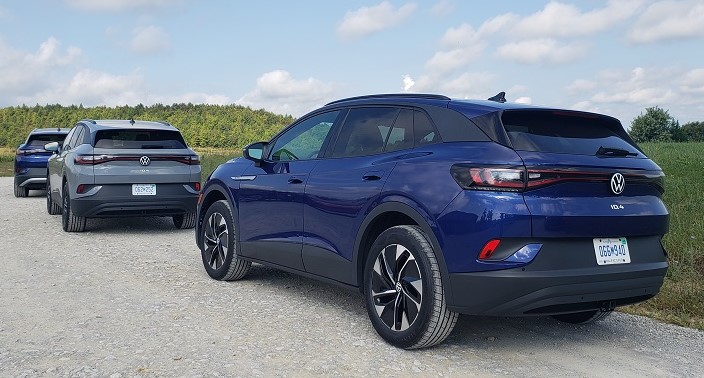 Still, the ID.4 (pictured above) is clearly finding buyers. In part, that’s because it’s the first non-Tesla EV compact CUV to hit the market with all-wheel drive and a starting price under $40,000. That’s the sweet spot of the new-car market now, with hundreds of thousands of Toyota RAV4s, Honda CR-Vs, Nissan Rogues and a host of others competing for couples and young family buyers – including VW’s own Tiguan and Taos.

But Volkswagen isn’t pitching the ID.4 against other electric CUVs. Instead, it’s targeting those popular gasoline vehicles – and executives say the ID.4 brings VW “lots of conquests” among buyers who’d never before owned a Volkswagen. The electric CUV is also the fastest-selling model in the VW range, turning every 12 days.

It remains to be seen whether that will last once VW has worked through its reservations – more than 10,000, executives say – and new competitors hit the market. Two of the most likely are the ’22 Hyundai Ioniq 5 and the ’22 Kia EV6. Volume deliveries of both should start in the first half of 2022, giving shoppers at least five mass-market BEV crossovers to compare and contrast.

Today, all ID.4s are supplied from Germany. But VW is working steadily toward building ID.4s at its only U.S. assembly plant, in Chattanooga, TN.

The ’21 Volkswagen ID.4 isn’t the best among BEVs in any single metric. Its range is adequate but far from impressive, given the size of its battery pack. It offers nothing like Tesla levels of efficient energy usage. Acceleration is sufficient but far from rocketlike. The shape and design isn’t jaw-on-the-floor stunning. Its interior mixes conventional and stripped-down, but won’t particularly surprise or delight most passengers. And the infotainment system clearly needs more work.

Yet the ID.4 adds up to a subtly appealing package. The AWD version is the icing on the cake and will likely boost ID.4 sales in those states that get winter weather. Prices start at $43,675 (plus $1,195 delivery fee), which is $3,680 higher than the RWD model. Deliveries started in September. 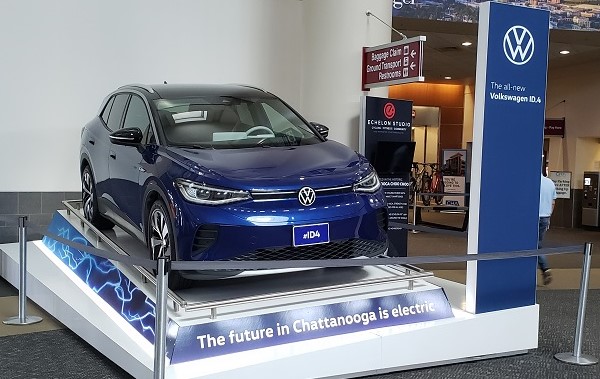 ID.4 on display at airport in Chattanooga, TN.