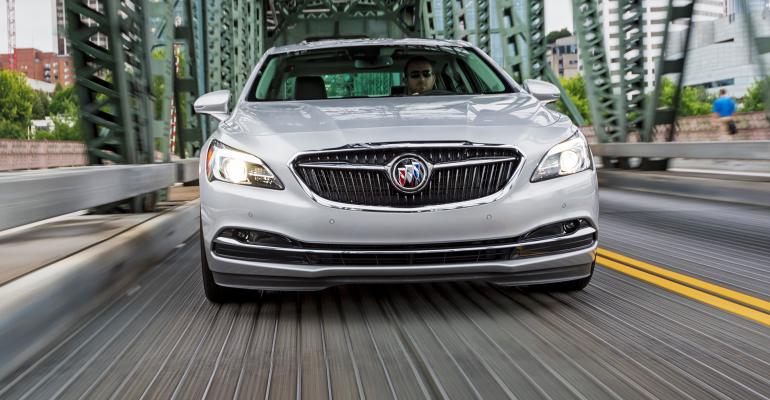 PORTLAND, OR – Buick, coming off its best half-year sales performance since 2005, adds the ’17 LaCrosse to its showroom this month and has every reason to believe the all-new large sedan will further enhance its numbers for the rest of the year and beyond.

The third-generation LaCrosse offers sophisticated exterior styling and interior amenities, rides on an exclusive, extended-wheelbase platform featuring a premium 5-link rear suspension and is powered by General Motors’ all-new 3.6L V-6. Already a Wards 10 Best Engines winner in the ’16 Chevrolet Camaro, the engine is mounted transversely for the first time in the Buick.

The basis for the vastly upgraded LaCrosse is GM’s P2XX architecture that pares 300 lbs. (136 kg) from the curb weight, with half of that coming from the sub-structure alone. Steel makes up nearly all of the body except the front bumper, assuring stiffness, while lower overall weight guarantees a more nimble vehicle and improved performance, Yanssens says.

“What does 300 lbs. mean?” he asks. “From the customer’s perspective, that’s the weight of a Sears Kenmore side-by-side  refrigerator. That’s heavy. That’s a lot of weight.”

The powertrain features GM’s next-generation DOHC direct-injection V-6 producing 310 hp and 282 lb.-ft. (382 Nm) of torque, updated with fuel-saving stop/start technology in addition to Active Fuel Management that shuts down two cylinders in lower-load driving. The engine is mated to a shift-by-wire 8-speed automatic transmission driving the front or all four wheels.

The engine drops 25 hp compared to the longitudinally mounted version in the Camaro and Cadillac ATS, CTS and CT6 due to more-restrictive intake and exhaust systems, he says. Torque is off just 2 lb.-ft. (3 Nm) compared to the Camaro.

​Yanssens notes stop/start was integrated into the engine design from the beginning of development. As a result, engineers were able to make it so seamless in operation that no stop/start defeat switch is necessary, he says.

The weight- and fuel-saving technologies are good for a 3 mpg (1.2 km/L) improvement in fuel economy, an 11% to 18% gain depending on the model.

“This engine was completely redesigned around quietness and fuel efficiency, while maintaining horsepower,” Yanssens says. “Our thrust to improve the performance was to reduce the overall vehicle mass by improving every characteristic associated with that.”

GM’s decision to upgrade to a 5-link rear suspension (from 4-link) provides assured and planted handling while maintaining a smooth and quiet ride. Front-drive models are available with GM’s torque-steer managing HiPerStrut front suspension, while all-wheel-drive versions get traditional MacPherson struts up front.

Continuously adaptive damping, switchable between touring mode and more spirited sport mode that stiffens the suspension and enhances steering response, is included on higher-trim models with 20-in. wheels.

It’s no secret Buick’s been on a bit of a styling roll lately, posting back-to-back auto-show coups with the 2015 Avenir and the 2016 Avista concepts, the former widely viewed as an early take on the new LaCrosse and the latter as a potential coupe version.

But taking concept to production often leads to compromises, most of which don’t favor styling, admits Alan Nicol, chief designer. One element kept nearly intact is the Avenir’s grille treatment, itself inspired by the 1954 Buick Wildcat II concept, with a red, silver and blue Buick tri-shield suspended on chrome wings floating on the traditional vertical bars.

Takahiko Suginoshita, lead exterior designer, sketched three key character lines, including one distinguishing “bone” line that wraps around the entire exterior, using the grille wings as the starting point. Rear side character lines harken back to Buick’s sweepspear styling, albeit in a thoroughly modern take on the heritage cue.

“We think there’s a timeless beauty,” Nicol says. “It’s Buick heritage, but in a contemporary way.”

In a road-show version of the Buick design studio at the drive event here, Nicol shows how Suginoshita’s sketches take on 3-D form in the hands of Daren McIntosh, a clay modeler who helps define the lines from which Dan Lijewski, senior digital sculptor, eventually creates digital images for production use.

Throughout the process, the designers compare notes and check their work to make sure key design elements aren’t lost in transition, Nicol says. Production limitations aren’t what they used to be either, as evidenced by the multiple character lines meeting at the rear door and around the door handle. Some of those lines are part of the door stamping that must match up with a large stamping that includes the entire side panel of the car from A to C pillars.

Buick says the LaCrosse maintains the brand’s commitment to class-leading interior quiet by working to reduce noise at the source, insulating sound from the cabin or absorbing or canceling those noises that do permeate its defenses.

Engineers measured 125 different sounds and sound levels in their benchmark, the Lexus ES350, Yanssens says. Thinner, lighter but more effective sound-dissipating insulation and laminated windshield and front side glass play a part in holding down the noise, as do door-mounted side mirrors and aerodynamic wheels that cut wind resistance.

The new electronic shifter frees up handy storage space beneath the center console, but also removes the need for a direct linkage to the transmission, eliminating a hard-to-insulate hole that serves as a path for noise into the cabin.

All that silence forced some relatively extreme measures in pursuit of the brand’s trademarked QuietTuning. For instance, engineers had to adjust the wiper system electric motor to slow down slightly at the end of each stroke to eliminate an annoying thud. Engine and air-conditioning fans are quieter, but careful attention also went into the design of interior vents to keep airflow noise to a minimum.

“Those are the types of thing you start to hear and you have to pay attention to when you get to this kind of level,” Strickhouser says. “Every component of the car we’re trying to optimize for quietness.”

Settle into the cockpit of the new LaCrosse and the first impression is one of simplicity of design, with continuous flowing horizontal lines that create a connected space between driver and passenger. An upper dashboard line subtly wraps around the entire interior, mimicking the exterior’s upper character line.

The center stack features a flush-mounted 8-in. (20-cm) color touchscreen backed by simple, intuitive buttons and knobs to control audio volume, ventilation and primary vehicle systems, while the 3-gauge color instrument panel is the definition of clarity and simplicity, backed by a color head-up display.

The e-shifter takes a moment to understand, with its offset-left Reverse location and with Park appearing in both the shift pattern and as a separate activation button. But it works flawlessly, with clear indicators of position and with standard steering-wheel-mounted paddles providing a sporty shifting option.

The expected stitched leather and soft-touch synthetic surfaces are there, along with unseen, seemingly minor touches showing attention to detail such as crowned window switches that provide a distinct touch point, indentations in door-release handles that guide the hand and soft ridges inside the door pull to assure a proper grab handle.

Interior lighting is subdued, eschewing the light-piping and extra highlights Nicol says have “reached a Las Vegas level” of distraction in some interiors. Instead, the LaCrosse uses subtle lighting to accent chrome strips and key functional areas such as door handles and footwells.

“We want to provide a pleasant sense of well-being, with reduced distractions,” Nicol says.

Out on the road, the LaCrosse feels agile regardless of model – even the front-drive setup with 18-in. wheels provides plenty of cornering grip with good body control without sacrificing ride comfort. Our Oregon test route is fairly smooth most of the way, with some construction-zone divots pushing the suspension’s limits, but without any drama or undue harshness.

That said, the LaCrosse equipped with 20-in. wheels, adaptive suspension and AWD clearly is the best choice, providing reassuring grip and a noticeable increase in chassis control and steering response with a flick of a switch to sport mode. The AWD uses a dual-clutch system to direct torque across the rear axle, improving the car’s traction in cornering and under acceleration.

Quietness is a virtue of the new Buick, even when challenged with relatively rough, granular pavement here that amplifies tire noise. Yes, some road noise makes it inside, but never to a level that makes it unbearable or even hard to converse. Thankfully, Buick does allow for a low level of engine sound to infiltrate the cabin, adding to the sporty driving experience rather than detracting from the solitude.

We spent considerable time testing the car’s myriad advanced driver-assistance systems, including full-range adaptive cruise control and lane-keeping assist, as well as pedestrian detection and warning. The ACC dependably identifies moving vehicles ahead, adjusts speed with them and is fairly responsive to changing conditions.

GM says the adaptive system is capable of fully autonomous stop-and-go operation in traffic, and while we found the ACC capable of bringing the car to a complete stop in traffic, the restart is so delayed we never experienced the vehicle resuming on its own.

The camera-based lane-keeping assistance intervention is light-handed in operation, identifying clear lane markings and gently nudging the vehicle back into the proper path or providing noticeable lane-departure alerts. The front pedestrian braking system correctly identified people at crosswalks on several occasions, but didn’t intervene because the pedestrians weren’t walking in the vehicle’s path.

The LaCrosse has been good for 620,166 U.S. sales since its introduction in 2005, but Buick sold just 13,963 in the first half of 2016, down nearly 33% compared with 2015. The road ahead is tough: Not only has the market shifted away from sedans to CUVs – a trend benefiting Buick’s Enclave and Encore models and accounting for much of the brand’s great sales news so far this year – but competitors have new or improved offerings in the market.

Built at GM’s Detroit-Hamtramck assembly plant, LaCrosse is on sale now, starting at $32,990 for the FWD base model to $44,190 for a premium AWD version (including a $925 destination charge).