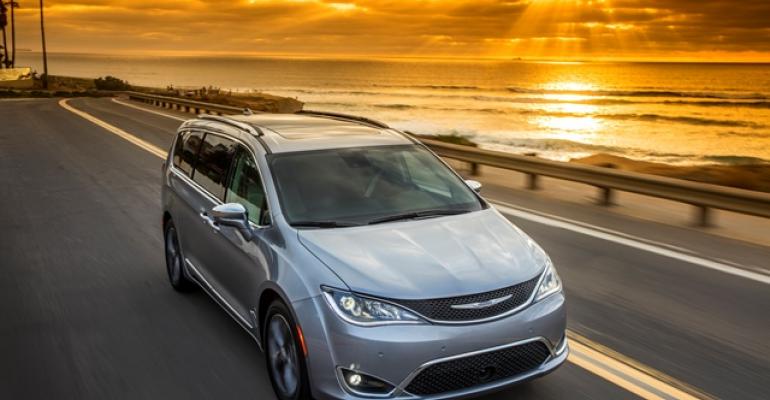 Chrysler looks to maintain its dominant position in the surprisingly resilient small-van segment with its all-new &rsquo;17 Pacifica minivan. On sale this spring, the Pacifica replaces the Town &amp; Country in FCA dealerships.

NEWPORT COAST, CA – A Baby Boomer friend along for the test drive of the all-new ’17 Chrysler Pacifica minivan here poses the decades-old question: “Where the hell is my flying car?”

Sorry, my Lost In Space-gen friend, the Pacifica doesn’t fly. But it does do nearly everything one might ask for in ground transportation, while eschewing its innate “minivan-ness.”

“We tried to create a vehicle that changes what a minivan is and what a minivan does,” says Matt McAlear, Chrysler brand-senior product marketing manager, at the introduction of the Pacifica.

Winnie Cheung, Pacifica chief interior designer, was one of the architects of that change, remembering her family’s first vehicle – a second-gen Town & Country.

From the Pacifica’s captain’s seat, the level of sophistication built into the new small van is immediately evident in the standard features available even in the lowest-trim LX model, with a flush-mounted center information touchscreen, easy connectivity and voice control as the starting points. Less obvious is the active noise cancellation standard on every Pacifica to ease communication from up front to passengers deep in the third row.

Jump to the maxed-out Limited with its built-in second-row UConnect theater system and you’ll never again be asked “Are we there yet?” There’s a travel-tracker app installed in the entertainment system that addresses that specific question.

But it’s what Chrysler engineers have done under the upholstery, shiny bits and sheet metal that make the Pacifica a much-improved van compared with the fifth-generation Town & Country and Dodge Caravan it replaces.

Mike Downey, Pacifica chief engineer, says superior ride, handling and quietness were the goals in developing an all-new minivan architecture. Engineers started at the base of the chassis, using the Stow ’n Go tubs in the second-row floor as rigid structural steel components to stiffen a minivan chassis that Downey notes is inherently flexible due to its large side doors.

Front suspension is MacPherson strut, with aluminum knuckles and control arms and high-strength steel linkages to minimize unsprung weight. To maintain ride comfort without sacrificing stability, Downey says his engineers developed a 2-stage bushing for the rear twist-blade/coil-spring suspension, part of which is stiff to assure taut steering and handling while another portion is softer to provide suspension compliance for a smooth ride.

Steering is electric variable-assist while stopping power comes from 13-in. (33-cm) disc brakes at each corner.

Weight Down, Rigidity Up

Torsional rigidity is doubled compared with the outgoing Town & Country, despite cutting overall weight 250 lbs. (113 kg) thanks to extensive use of aluminum suspension components, high-strength steel in the body structure, magnesium inner components in the liftgate and aluminum in the liftgate and sliding doors.

Chrysler says it invested 1.2 million computer engineering hours and 400 hours of wind-tunnel testing to achieve Pacifica’s best-in-class 0.3 coefficient of drag that Downey notes outperforms many cars on the road today. A sharply raked windshield, active grille shutters and underbelly covers are among the key elements that contribute to the low aero number.

Under the hood, a revised 3.6L Pentastar V-6 hooked to a 9-speed automatic transmission provides 287 hp and 262 lb.-ft. (355 Nm) of torque. That’s up slightly from the outgoing model and exceeds the power output of its competitors, while its fuel economy is comparable or better compared with nearly every other minivan.

Engine upgrades include 2-step variable-valve lift, cooled exhaust-gas recirculation and weight reductions. Stop/start capability will be added as a standard feature later in the model year.

Though it is impossible to hide sliding doors and the typical profile of a minivan, Chrysler designers have done a yeoman’s job of giving the Pacifica a taut, athletic appearance. Building on a wider 68.3-in. (1,735-mm) track both front and rear – 2.7 ins. (69 mm) wider in front and 3.5 ins. (89 mm) wider at the rear axle compared with the ’16 model – the van makes every effort to emphasize width vs. height and length.

The handsomely styled front end features a hood with twin strakes, a dark grille with a floating winged badge, and a continuous strip of chrome wrapping around the lower inlet and fog lamps to create balance and a sense of width.

A clean front-to-rear beltline crease highlights the side panels, with a lower chrome strip and chrome window surrounds giving the profile view some heft. Sliding door tracks are tucked under the rear side glass to eliminate telltale lines, while reverse-angled D-pillars and wraparound rear glass and taillights help complete the CUV look.

Interior styling accentuates the feeling of spaciousness and width, with quality materials and equipment throughout. Flush-mounting the center information touchscreen adds a tablet-like premium appearance even with the base 5-in. (12.7-cm) unit. An 8.4-in. (21-cm) screen is optional, as are comfort and convenience features from the twin 10-in. (25-cm) seat-mounted video screens to entertain the second-row occupants to a wet-dry vacuum to clean up their inevitable messes.

Chrysler continues to improve on its patented Stow ’n Go seating and storage system introduced in 2004. The seats that tuck away into floor tubs now come with the ability to tilt out of the way with a child seat still attached to allow third-row access, while Stow ’n Go Assist automatically moves the front seats forward to allow easy stowage of the second-row seats.

A first impression from a millennial hopping into the front passenger seat: “This doesn’t feel like a minivan. It’s more like an SUV.”

From the driver’s seat, that’s a sentiment we’d echo, as the Pacifica provides a commanding driving position, but without the big step up usually required to climb into those taller vehicles. It feels very CUV-like from the start and doesn’t lose much of that appeal out on the road.

Chrysler says the suspension provides “handling capability approaching that of a premium sports sedan with the smoother ride of a large luxury sedan” and we’d say the Pacifica comes close to meeting those marks.

As we left the urban traffic behind and took to some winding mountain roads, the Pacifica seemed to gain car-like handling and capability, the chassis feeling quite agile with little body roll or dive.

Our second-row passengers would’ve preferred some larger seat bolsters to go with their armrests and the roof-mounted grab handles as we attacked tight corners with the kind of confidence typically inspired by far sportier machines. We never exceeded the speed limit, but neither did we feel like we were holding back traffic.

Steering is responsive, with a noticeable on-center dead zone that isn’t necessarily a bad thing in a family vehicle loaded with distractions. Brakes are more than adequate, even with a full load.

We were impressed by the vehicle’s quiet and comfortable ride, measured in part by lack of road or wind noise, but also by the ease with which we could communicate from row to row without raising our voices. The body feels solid and the chassis composed, unlike many past minivans that suffered from severe shakes, rattles and undue body roll.

The Pacifica’s upgraded V-6 provides ample power, whether from a standing start or to gain speed on an uphill grade or freeway entrance ramp. We did note some lag and abrupt shifting at times as the engine and multi-ratio gearbox found the right match for speed, rpm and throttle demand.

The ’17 Pacifica is on sale in April with five trim levels: LX, Touring, Touring-L (leather), Touring-L Plus and Limited. The base model starts at $28,595 and comes equipped with features such as Stow ’n Go seats, tri-zone climate control, Bluetooth capability, active noise cancellation, active grille shutters and a rear park-assist camera. Prices do not include $995 destination charge.

Touring ($30,495) adds features such as satellite radio, power sliding doors and automatic headlamps; Touring-L ($34,495) steps up to leather seats, a power liftgate and a suite of safety sensors; Touring-L Plus ($37,895) brings the full UConnect theater system, a 7-in. (17.7-cm) driver information cluster and a 8.4-in. touchscreen; and Limited ($42,495) tops off the options with hands-free sliding doors and liftgate, power third row seats, navigation, built-in vacuum and panoramic sunroof.

Arriving in the second half of the year is the Pacifica Hybrid, the industry’s first plug-in hybrid minivan. Chrysler projects the hybrid will deliver up to 30 miles (48 km) of electric-only range and an estimated 80 mpg-e (2.9 L/100 km).

The Pacifica signals a shift in the company’s strategy as Chrysler phases out the carryover Dodge Caravan. Production of an entry-level ’17 Caravan, which is built alongside the all-new Pacifica at the Windsor, ON, Canada, plant, is expected to end later this year.

McAlear says offering a single minivan nameplate makes sense now that all brands under the FCA umbrella are offered at all FCA dealerships.

Chrysler introduced the front-drive minivan back in 1983 and watched as 17 competitors joined the fray, driving the small-van segment to a 1.2 million-unit peak at the turn of the millennium before it tumbled to just over 400,000 vehicles in 2009, according to WardsAuto data.

Since then, the segment has rebounded to about 600,000 units annually, with the Chrysler Town & Country and Dodge Caravan owning about a third of the market against three remaining primary competitors from Honda, Kia and Toyota, WardsAuto data shows.

McAlear says Chrysler is betting $2 billion in development dollars that minivan sales will remain solid and even grow as parents of the estimated 4 million children expected to be born in the next few years will want a vehicle with easy-access sliding doors and all the family-friendly amenities.