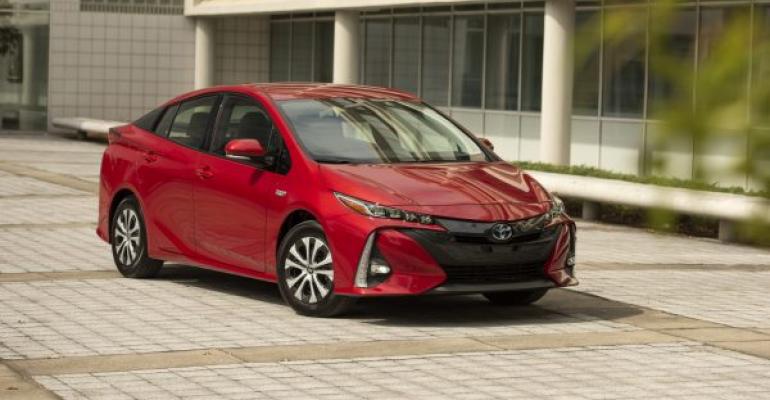 Toyota’s sole plug-in hybrid still has little range relative to competitors, but is more efficient than it may appear. It’s also a screaming deal.

GREENSBORO, NC – When the second-generation Toyota Prius Prime launched in fall 2016 in the U.S,. its electric range climbed to 25 miles (40 km) from the first generation’s 11 miles (18 km).

Due to the added expense of two powertrains, there isn’t much point in owning a PHEV without relatively good electric range (per Federal Highway Admin. 2018 data, Americans average 37 miles [60 km] of driving per day), so the second-gen Prime seemed like a compliance car at first glance.

But in a 2016 test we were impressed with its cost ($27,100 to start) and its ability to slip into electric mode frequently.

The car, which remains a great deal starting at $27,750 for ’20, holds at 25 miles of electric range. It looks woefully under-ranged, especially in 2019 when all the talk is about the 200-mile-plus (322-km) battery-electric vehicles such as the Chevy Bolt, Hyundai Kona and Tesla Model 3.

But even without using hypermiling skills during our test drive, the engine largely stays off and we drive most of our miles on electric. More on that later.

Toyota has tried to make the vehicle palatable to more consumers (not surprisingly, the second-gen Prime hasn’t been a rousing success on the sales charts – Toyota has sold about 66,000 copies of the vehicle since its 2016 launch, Wards Intelligence data shows).

It now boasts a middle seat in the back, something it had been lacking and the favored spot for many parents to place child safety seats.

And it steps more solidly into the 21st century with two 2.1-amp USB charge ports for rear-seat passengers and standard Apple CarPlay and Amazon Alexa compatibility.

Its Apple-like white glossy interior trim was controversial, so Toyota has swapped it for glossy black trim.

The changes are mostly positive. The middle seat is comfortable, albeit narrow; the USB ports and Apple CarPlay additions absolutely necessary for a ’20-model-year vehicle.

However, the glossy black is a more obvious backdrop for dust and fingerprints. The trim in our test vehicle is filthy even after just a few hours of driving by journalists.

While our car’s 8.8-kWh battery pack is barely 1/3 full as we climb behind the wheel, the vast majority of our miles (73%) are electric per an in-vehicle display.

Toyota’s legendary Hybrid Synergy Drive technology, enabling seamless transitions between the car’s twin electric motors and gasoline engine, is the key to such a figure, as is some downhill coasting and frequent braking on the business-heavy suburban route. Both help recharge the battery.

We also enjoy mild weather and flat-ish topography, both great ways to help keep an engine off.

The Prime has the same propulsion system as the traditional Prius hybrid: a 95-hp 1.8L Atkinson-cycle 4-cyl. mated to two motor-generators – a 2016 Wards 10 Best Engines winner. But unlike in the Prius, where motor-generator 1 only starts the engine and regenerates the battery pack, both MG1 and MG2 in the Prime drive the wheels in electric mode, thanks to a 1-way clutch for MG1.

Like many new Toyotas, the Prime has as standard Toyota’s full-speed Dynamic Radar Cruise Control, i.e., adaptive cruise control. We use ACC and lane-departure alert with steering assist (also standard) during the majority of our journey.

Automatic stops with ACC are great, including in one instance when the preceding vehicle is stopped at a light a good distance ahead. Our Prime sees it, even with just two bars of following distance set, and brings us to a gentle and complete rest.

Getting going after a full stop leaves a lot to be desired, as do the old-school stalk-mounted controls.

Our Prime resumes at a very pokey pace with ACC on, so we intervene and step on the gas for the benefit of trailing vehicles.

The stalk is difficult to see and we inadvertently cancel ACC when we intend to resume the feature, more than once.

Meanwhile, the steering assist very gently torques the wheel (almost unnoticeably) to bring us back into our lane when we drift near the lines.

During our time in control, the Prime feels much like we remember it, exhibiting decent torque but soft, grabby braking. We liked the toss-ability of the vehicle in 2016, but our route here lacks any curves to gauge that factor.

We still aren’t fond of the overwhelming amount of information given on the vehicle’s HUD, vertical center touchscreen and horizontal upper IP displays. It takes a few seconds to figure out if ACC and LDA are active because the icons aren’t easy to spot (FYI: They’re far right on the IP display).

Voice recognition, standard on all three grades of the car, is a mixed bag. We successfully find a destination via voice, but navigation doesn’t give verbal directions and delving into the menu leaves us scratching our head. But using voice to tune a local FM station is done quickly.

The under-$30,000 Prime predictably has cheap-ish interior materials, but there are some nice touches like retractable nubs on front cupholders and fully pleathered front seatbacks.

With their battery packs and motors able to handle short distances, and gasoline-fed internal-combustion engines as backup for longer journeys, PHEVs make a lot of sense for those who have short commutes but occasionally need to make long trips that exceed electric ranges.

But automakers, Toyota included, have struggled to market plug-in hybrids to consumers, who studies say remain confused about how they operate.

The two powertrains onboard a PHEV are difficult enough to explain to non-gearheads, let alone the fact the Prime, based on our testing, is more efficient than it appears at first glance.

For those looking for an affordable PHEV, and who don’t mind a car, the Prime is a good choice. But we think the forthcoming RAV4 plug-in, debuting at the Los Angeles auto show, may be the PHEV to beat, based on an expected longer EPA-estimated electric range and the current popularity of the RAV4, the best-selling CUV in the U.S. 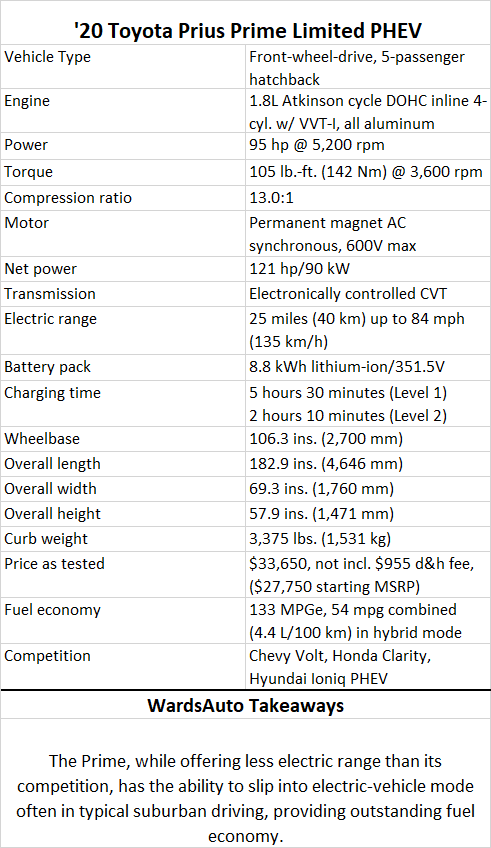