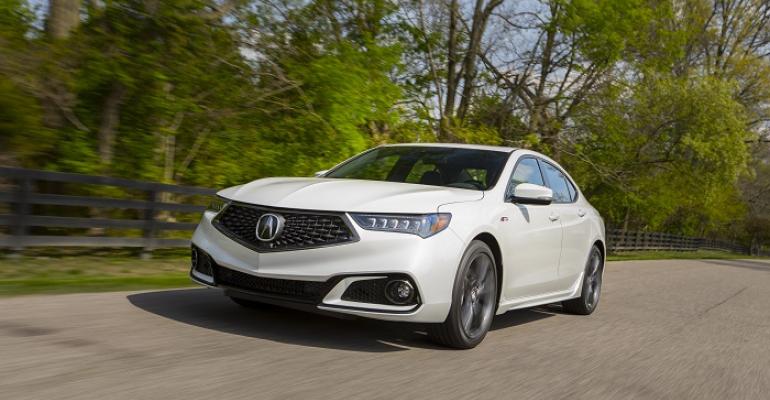 The near-luxury brand rights the wrongs of the first TLX, specifically by fixing its styling and in-vehicle technology.

LOUISVILLE, KY – When we reviewed the Acura TLX three years ago, we noted how much volume the TLX’s predecessor, the TL, had lost over the years, largely due to the rising popularity of luxury CUVs and declining appeal of midsize luxury sedans.

Acura had hoped it could get its midsize sedan back on track with the launch of the ’15 TLX, but that really hasn’t happened.

Acura made the ’15 TLX bigger than the ’14 TL, putting it more in line with competing models such as the BMW 3-Series. It also boosted performance with a larger, more-powerful engine and improved transmissions with more gears.

But the TLX looked very similar to the TL, chiefly by wearing its widely derided “power plenum” grille.

And Acura now admits the car’s infotainment system wasn’t as good as it could have been.

So for its ’18 refresh, the TLX gets a new face and improved technology, plus more styling delineation between grades so those spending more can show off.

The ’18 TLX, from the base 2.4L grade up to the new A-Spec grade, wears Acura’s latest grille, the “diamond pentagon,” giving it a more pleasing face and better aligning it with the big-mouth-grille trend in the luxury-vehicle sector.

The Tech and Advance grades receive chrome accents and new 18-in. wheels.

The Advance gets LED fog lights and a rear spoiler, plus exposed square exhaust tips.

For added style, the A-Spec boasts a blacked-out grille with a black-chrome surround that adds some sparkle. The new grade also gets unique “shark gray” 19-in. wheels, different front and rear fascias and round exhaust tips.

The TLX Advance also gets a new surround-view camera, power-folding side mirrors and a very rare feature: a heated windshield.

Multiple interior color choices give luxury buyers the variety they desire. Ebony, graystone and parchment leather are standard and espresso dark-brown leather is available only in V-6 models.

Not surprisingly, the A-Spec interior is the flashiest with red ambient light pipes, in lieu of the Advance’s white, and red or black leather combined with Alcantara for the seats.

After spending a morning and afternoon in the A-Spec and V-6 grades, those claims ring true. Especially nice are modern graphics and fonts that behoove a luxury brand. Acura’s prior onscreen graphics and fonts were dated and shared with its mass-market Honda brand.

With the increasing popularity of those who want to use their phone as their primary means of information and entertainment behind the wheel, the addition of Apple CarPlay and Android Auto across the board should make the TLX much more competitive in a group where many entrants already have one or both.

While Acura has improved the functionality of the upper screen of its infamous 2-screen center stack, we still find the lower display, primarily used to control the car’s audio system, too small, resulting in tiny on-screen buttons with little space around them. We suspect little attention was paid there because Acura is readying a more modern 1-screen system, seen in its Precision Cockpit concept interior at last fall’s Los Angeles auto show.

Overall fit-and-finish is good, although we spot some flashing on door pockets in a V-6 grade with Acura’s Super-Handling All-Wheel Drive.

Front and rear seating is comfortable, with new power thigh extenders on V-6 Tech, Advance and A-Spec grades a welcome addition for drivers with longer legs.

The TLX’s 206-hp 2.4L I-4 and 290-hp 3.5L V-6 engines go unchanged for ’18, although the latter’s ZF 9-speed automatic transmission is “retuned for a more refined feel,” Acura says. The 9AT has been a source of customer complaints for nearly every brand using it, Acura included. Owners have cited shift busyness and rough gear changes, which has led to software reflashes and even transmission replacements. But in our recent experiences driving various models with the ZF 9AT, including the new TLX, shifts are smooth and imperceptible.

The 2.4L, not tested here, continues to be paired to Honda’s 8-speed DCT.

Acura is quick to note the A-Spec grade is more than an appearance package. Its wider, stickier tires (Michelin’s 19-in. 40R/245), increased spring rates, stiffer stabilizer bars and, on SH-AWD models, a faster steering ratio with better on-center feel and linearity, make the TLX a blast to drive.

To really bring out the A-Spec’s character, and that of the other V-6 SH-AWD grades, Sport+, one of four driver-selectable modes on the TLX, is a must.

Out of the four settings, which also include Normal, Econ and Sport, it was the only one to noticeably change the car’s character.

Sport+ holds lower gears longer when using the car’s paddle shifters and the TLX’s Active Sound Cancellation technology also allows for a louder engine sound in the mode. Acura claims an increase of up to 40 decibels in Sport+. From our experience here, the brand isn’t lying.

Brakes are grabbier in Sport+, even at lower speeds such as when approaching a stop sign, so it’s best to switch out of that mode immediately after spirited runs.

But of course consumers don’t purchase on price alone. Brand cachet plays an important role in success, reflected in BMW’s years-long reign at the top of the Lower Luxury segment with the 3-Series. Branding is an area Acura still needs to work on. The NSX supercar is a start.

In a smart move, the TLX’s new ad campaign flashes images of the NSX to highlight the cars’ performance linkages.

All the updates to the TLX make it fresher and more modern and should be helpful in spurring U.S. sales back near 50,000, which is Acura’s goal.

But it will be tough for the TLX to gain ground given the shrinking lower-luxury car segment (down 9.1% last year and 11.3% through April), the popularity of luxury CUVs, and what more and more is looking like a prolonged downturn in U.S. new-vehicle sales.

The ’18 TLX goes on sale June 1 in the U.S. It continues to be assembled at Honda’s Marysville, OH, plant.