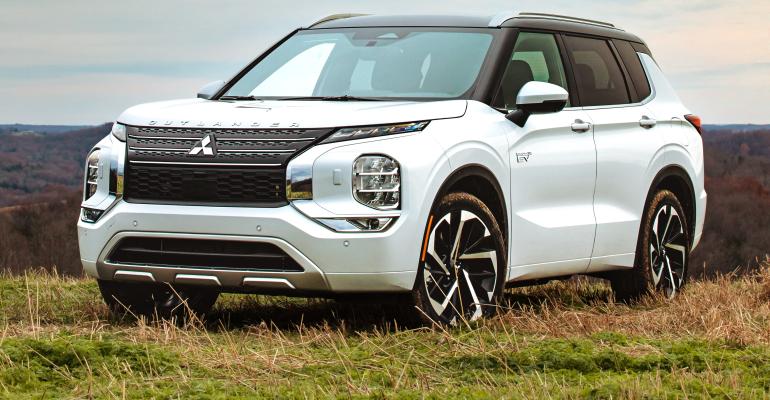 Mitsubishi’s new Outlander PHEV carries on the tradition of the brand’s all-wheel-drive prowess, powered by electric motors and offering the option of fuel-free driving.

FRANKLIN, TN – Most owners won’t deliberately toss their new ’23 Mitsubishi Outlander PHEV hard into a slippery corner to test its roadholding ability, let alone take it out into a muddy field to turn a few doughnuts.

But should those owners find themselves in a slick situation, they can rest assured the Outlander PHEV’s low center of gravity, rear-biased all-wheel-drive system and an array of stability and traction controls will help keep the 3-row CUV on the road until the snowplow arrives.

At a media event here, we drive the Japanese automaker’s latest plug-in hybrid over hill and dale en route to the Polecat Training Center in Fayetteville, TN, where the track and off-road testing takes place.

Contrary to the above shenanigans, most buyers will appreciate the Outlander PHEV’s 38 miles (61 km) of pure electric driving range, backed by 26 mpg (9.0 L/100 km) combined fuel economy when the 2.4L 4-cyl. is engaged. Put it all together and the EPA lists the vehicle’s combined efficiency at 64 mpg-e.

Electric range is extended compared with the previous Outlander PHEV thanks to more-efficient motors powered by a 96-cell, 350V, 20-kWh lithium-ion battery pack, up from the previous model’s 80-cell, 300V, 13.8-kWh module.

Completely redesigned for ’23, the Outlander PHEV builds on the electrified model’s legacy dating to the first-generation PHEV’s launch in 2013 (although the vehicle wasn’t introduced in the U.S. until the 2018 model year after it already had been refreshed in 2016).

The PHEV’s sheet metal and interior bits are common with the non-electric Outlander, although the PHEV gets a standard 12.3-in. (31.2-cm) instrument cluster. 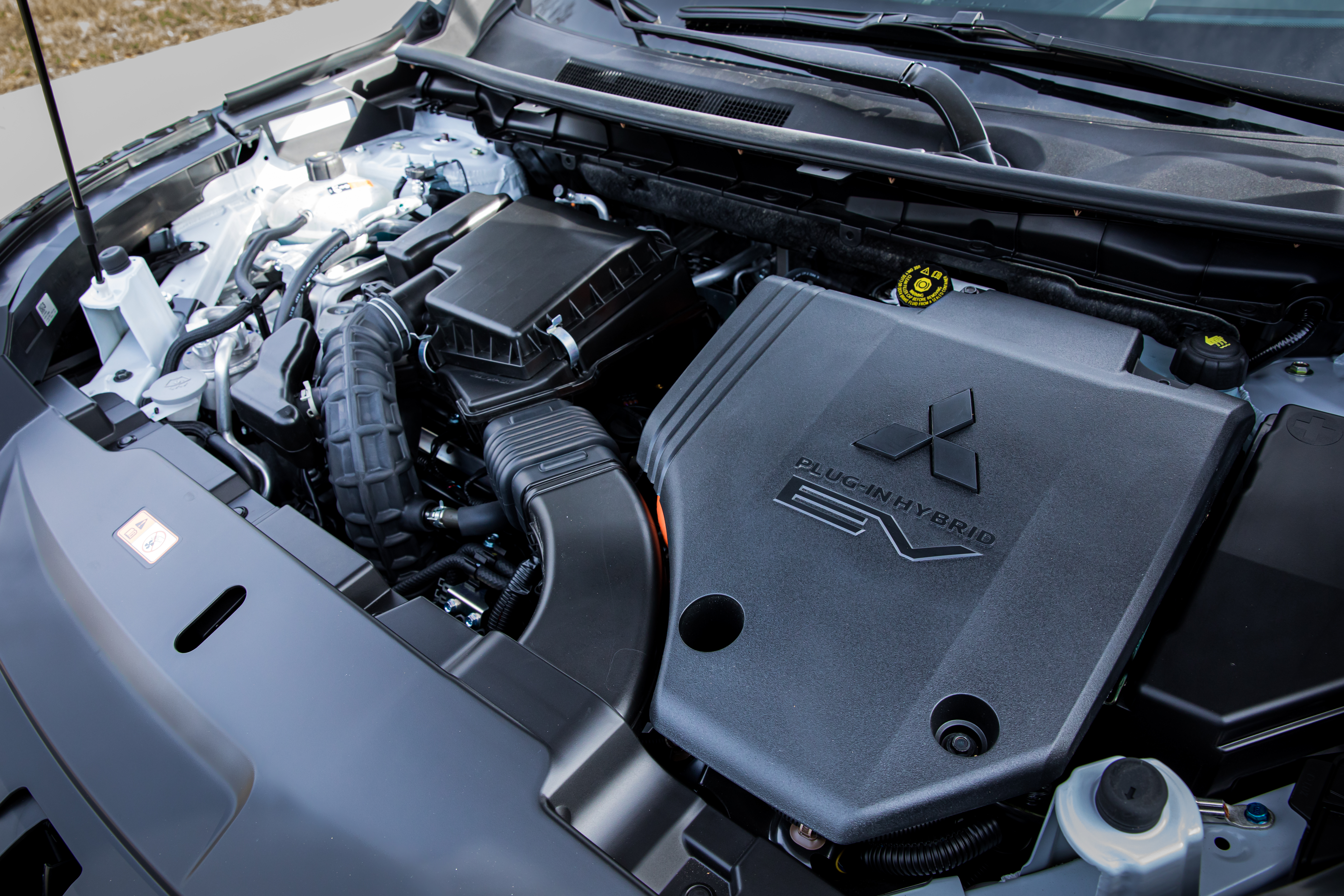 Front and rear motors are optimized for maximum efficiency, with the front motor producing 114 hp and 188-lb.ft. (255 Nm) of torque, up 34 hp and 87 lb.-ft. (118 Nm) from the previous Outlander PHEV. Oil cooling is incorporated into the front motor, which also features a boost function by increasing voltage to the motor for short periods.

The rear motor gets increased winding density that improves output by 40 hp to 134 hp; torque is equal to the front motor.

Efforts to limit high-frequency motor noise from intruding into the cabin are generally successful. A discerning ear will notice some whine, but even low audio volume will mask that sound.,

The Outlander PHEV can operate as a pure BEV or a parallel or series hybrid, depending on state of charge and driving conditions. In parallel mode, the engine drives the wheels with an assist from the electric motors, while in series mode the engine’s propulsion generates electricity to charge the battery, with that power routed to the electric motors.

Kentaro Honda, chief vehicle engineer, says the vehicle can operate in BEV mode to 83 mph (134 km/h) but typically the engine will kick in at about 43 mph (70 km/h) to assist the motors. Power routes to the front axle via a single-speed transaxle designed to take advantage of the low-end torque from the electrics while providing optimum efficiency at highway speeds. Overall range in hybrid operation is 420 miles (676 km) due in part to a larger 14.8-gal. (56 L) fuel tank (vs. 11.3 gallons [43L]) in the previous-generation Outlander plug-in.

Modes are available to recharge the battery while driving or to hold the existing charge. The company says the battery will recharge from zero to 80% in 94 minutes when idling and stationary, or in about an hour when driving at 70 mph (97 km/h). Via plugging in, the pack recharges in 6.5 hours on a Level 2 240V outlet and 38 minutes on a DC fast charge. A 110V household outlet takes 16 hours to recharge the battery pack.

During our drive, the PHEV runs in battery-only mode for about 25 miles (40 km) before the engine kicks in to add propulsion. We sample the vehicle’s range of drive modes, including its five levels of regenerative braking. Unlike many BEV builders, Mitsubishi eschews one-pedal driving because engineers wanted to maintain the vehicle’s ability to “creep” ahead similar to a traditional ICE powertrain.

An “innovative” mode combines motor and engine braking to create what engineers say mimics a stronger regenerative braking feel – consider it an added “8” level of regen. Brake feel is always immediate, bordering on touchy, regardless of drive mode.

While highway and byway driving reveals a smooth and steady performer, the vehicle’s strongest attribute is its aforementioned all-wheel-drive system, dubbed S-AWC for Super-All-Wheel Control. The system builds on Mitsubishi’s legacy of superior AWD systems in vehicles such as the Evolution rally car and offers seven drive modes: Normal, Eco, Tarmac, Gravel, Power, Snow and Mud.

As a power supply, the Outlander PHEV offers two AC outlets (one in the center console, a second in the cargo area) capable of delivering 1,500W to power home appliances during an outage or at a remote location.

The Outlander PHEV faces an uphill battle to gain market share against leaders in the midsize CUV PHEV segment including the Toyota RAV4, Hyundai Tucson and Ford Escape. Since its introduction in the U.S. in 2017, the previous-generation Outlander PHEV posted about 14,000 sales compared with 27,000 for the RAV4, 25,000 for the Tucson and 17,000 for the Escape, Wards Intelligence data shows.

Plug-in hybrids, in general, have a tough road to travel en route to acceptance and may never gain the same popularity as traditional hybrids or BEVs. But as a vehicle for the transition from internal-combustion power to pure electric motive, the Outlander PHEV offers an excellent option: plug-in powertrain flexibility, the functionality of a CUV and the prowess of a rally-bred Mitsubishi all-wheel-drive system. 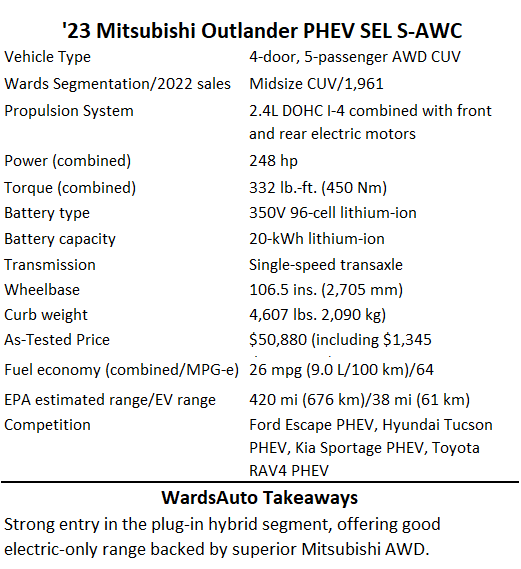