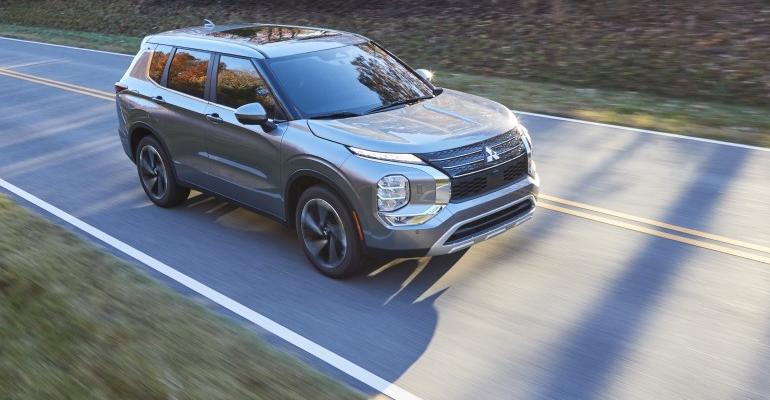 ’22 Outlander is a Huge Leap Forward for Mitsubishi

The ’22 Outlander, the first Mitsubishi springing from the Nissan-Renault-Mitsubishi alliance and sharing its platform with the upcoming all-new Nissan Rogue, feels like a vehicle that skipped ahead two generations. At least.

HELL, MI – Getting out of the refreshed ’22 Mitsubishi Eclipse Cross and into the all-new ’22 Mitsubishi Outlander tells you everything you need to know about the future of the Japanese brand as part of the Nissan-Renault-Mitsubishi alliance.

While the Eclipse Cross represents a competent midcycle makeover for the small CUV, the redesigned Outlander, sharing global architecture with the all-new Nissan Rogue, feels like a vehicle that skipped ahead two generations. At least.

Where the outgoing Outlander seemed cobbled together from a low-budget parts bin, with tiny knobs and outdated switchgear suggesting even weaker engineering under the skin, the new model features a sharp interior that’s also functional (volume AND tune knobs, with knurling!), a crisp LCD instrument cluster, a bold appearance that’s bound to be polarizing and a surprisingly competent chassis.

The powertrain, while new to Mitsubishi, is the same 2.5L 4-cyl. that Nissan has installed in a couple of models, including the aforementioned Rogue. The engine was introduced in the Altima sedan, where it made 188 hp when it was a nominee for Wards 10 Best Engines & Propulsion Systems in 2019.

As in the Rogue, the direct-injected, naturally aspirated 2.5L produces 181 hp and 181 lb.-ft. (245 Nm) of torque, directed to the all-wheel-drive via a continuously variable transmission designed to mimic an 8-speed automatic.

Nissan’s – er, Mitsubishi’s – CVTs continue to improve. In the Outlander, the powertrain rarely exhibits the runaway-rpm character common with CVTs, but rather snaps off crisp ratio changes at about 5,500 rpm under full throttle.

Adding to the sporty feel, the engine’s horsepower curve ramps up at about 4,800 rpm, invoking a significant uptick in engine response.

On our circuitous route through the Michigan countryside, we often run the Outlander in its “Tarmac” mode – that’s Mitsubishi-speak for “Sport,” an appropriate carryover from the moniker employed in the brand’s rally-bred Evolution models. It’s one of six modes including Normal, Eco, Gravel, Snow and Mud (Mud is deleted on FWD models).

When cruising in Tarmac mode, the CVT never upshifts past the fifth-gear ratio, keeping revs up while amping up throttle response. Pushing the Outlander along the open back roads, the powertrain produces plenty of punch in the higher rev range.

The thick, leather-wrapped steering wheel in our test car provides a confident feel, with a smidgen of extra on-center room, while the suspension does a remarkable job of limiting body roll through the turns. The Outlander’s 13.8-in. front and 13.0-in. rear brakes (up from 11.7 ins. and 11.9 ins., respectively) provide ample stopping power. The new CUV sports 20-in. wheels on all but the base model. 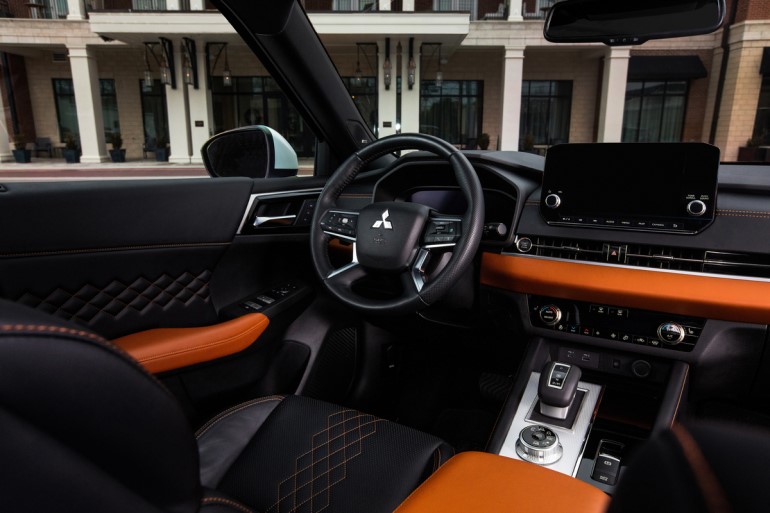 Inside, much of the same features, trim and upholstery that pleasantly surprised us in the Rogue ("Nissan Doesn’t Go Rogue, Thankfully, with 2021 CUV") also appear in the Outlander, with diamond-pattern quilting on the seats and soft-touch door trim offset by machined aluminum and gloss-black surfaces.

The full-color, 12.3-in. (31-cm) customizable LCD instrument cluster provides excellent gauge clarity regardless of lighting conditions. Our test car’s 9.0-in. (23-cm) infotainment/navigation screen is an upgrade from the base 8.0-in. (20-cm) unit.

The new system offers Apple CarPlay and Android Auto connectivity, wireless for the former. MI-PILOT Assist, Mitsubishi’s version of the Nissan ProPILOT Assist, works well in adapting speed to traffic and is fairly capable in lane centering and lane tracking, allowing hands-free operation for at least 15 seconds in our testing.

Second-row seating is comfortable and spacious thanks to fore and aft adjustments and reclining seatbacks. The two-seat third row, while exclusive for the segment, is strictly limited to providing extra tie-down points for small children.

While the Outlander shares many features with its Rogue cousin, exterior designers applied the brand’s own touches to achieve an “authentic and majestic” styling. Love it or hate it, the powerful front appearance emphasizes width with its three horizontal bars topping blacked-out lower grilles and a wide lower inlet. 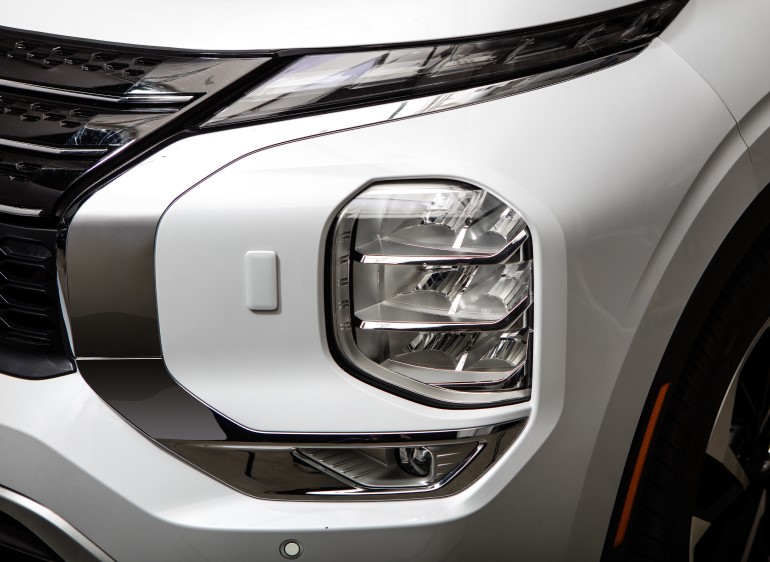 The gas-powered Outlander is on sale now, after having skipped the entire ’21 model year.

The Outlander PHEV, last offered as a ’21 model, is not available as a ’22 model. Mitsubishi officials confirm a new PHEV is coming, but they won’t indicate when it might arrive.

Mitsubishi lists the Honda CR-V and Toyota RAV4 as competitors, both of which handily outsell the Outlander in Wards Middle CUV segment. In 2020, the Outlander notched 29,096 sales (including 1,964 PHEVs) compared with 333,502 CR-Vs and 430,387 RAV4s, Wards Intelligence data shows. 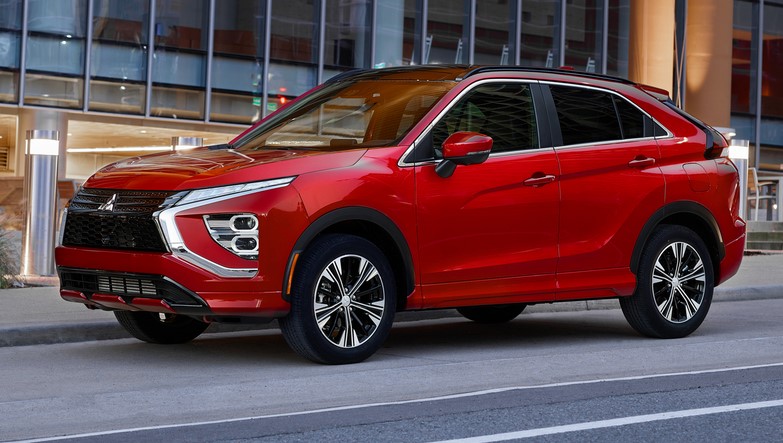 That other car? Yes, we also drove the refreshed Eclipse Cross, which gets new front and rear fascias, a much-improved user interface that deletes its finicky touchpad and employs real knobs instead of capacitive touch controls, and a 5.5-in. (140-mm) stretch in overall length that adds 11% more cargo room.

Nice enough car, the Eclipse Cross, but representative of Mitsubishi’s past. The all-new Outlander maps the road ahead. 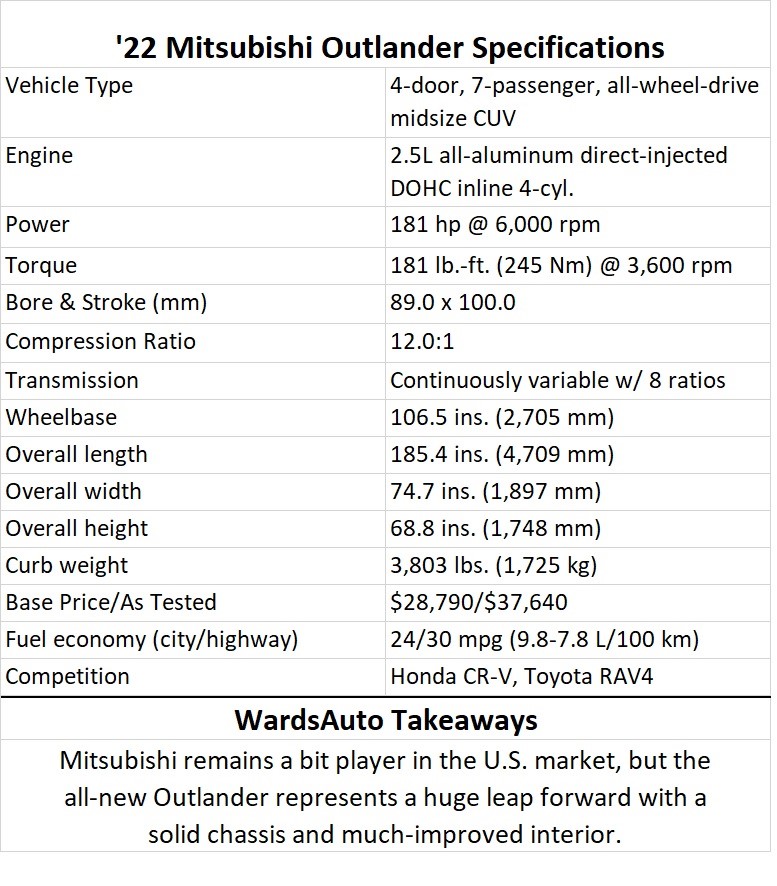