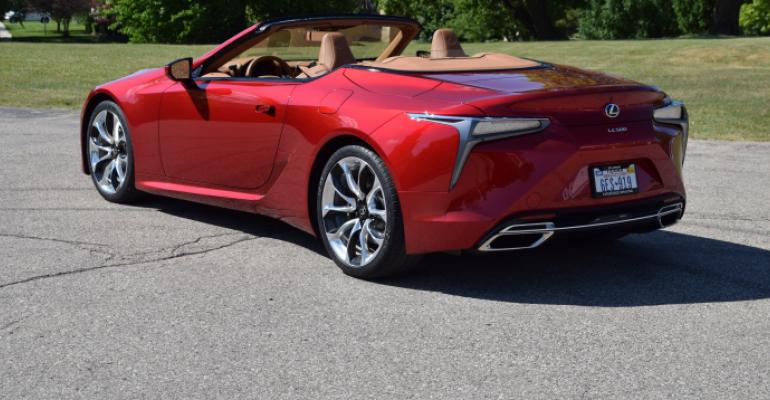 Over the course of a weeklong test drive in an outrageously sexy Infrared LC 500, it was the object of every adult’s socially distanced affection in my neighborhood.

There are cars that turn heads, and then there is the rakishly handsome ’21 Lexus LC 500 Convertible.

Like a young Michael Caine in “Alfie,” the LC 500 droptop is a dapper, yet rather disreputable character for how skillfully it seduces onlookers. It is slung impossibly low, slinking after its next victim. Not a character line is out of place, and each one is stretched tautly along its hood and bodysides nearly to the point of fracture. Its black trapezoidal spindle grille conveys a dark-and-handsome look, while the arrowhead daytime running lights exude a smoldering gaze. The windshield is pomade slick. Taillamps are designed to resemble a jet’s afterburners at night and, as for the rest of its rear end, let’s just say this baby got back.

Over the course of a weeklong test drive in an outrageously sexy Infrared LC 500, it was the object of every adult’s socially distanced affection in my neighborhood. Friends and family would stare and shake their heads, as if aching for it to return the love. Wicked little ones like the LC 500 seldom do, until you’re behind the wheel.

The LC 500’s 5.0L V-8, an all-aluminum, DOHC thriller mated to an excellent 10-speed automatic with paddle shifters, roars to life under even the slightest throttle input. Gear changes from the transmission in manual mode feel as quick as a DCT, and the exhaust returns a throaty “pop-pop-pop” during aggressive downshifts.

The LC 500 walks the walk as much as it talks the talk. A prodigious 471 hp gracefully whisks me past other cars on the highway like a derby champ whipped with a riding crop, while a peak 398 lb.-ft. (540 Nm) of torque catapults the LC 500 from stoplight to stoplight along Metro Detroit’s famous Woodward Avenue. There is no forced induction at work, either, so throttle inputs return instant gratification. Observed fuel economy is a shameful 13 mpg (18 L/100 km) but a conscience comes neither as standard, nor optional, equipment on the LC 500.

My only complaint is the car feels heavy in the corners. I wouldn’t be quick to blame the additional hardware for the power top, which opens in 16 seconds and at up to 31 mph (50 km/h). The hardtop suffered the same complaints, which led engineers to trim 22 lbs. (10kg) from its hide for ’21. Keep trimming, Lexus.

The LC 500 cabin, a 2017 Wards 10 Best Interiors winner in the hardtop version, is arguably the most dramtic Lexus offers. My tester arrives soaked in Toasted Caramel leather and the seats wrap passengers like a cocoon and provide upper body heat for cooler weather with the top down. The 2-tier dash sits low for good visibility, a small-diameter, leather-wrapped steering wheel is designed for optimal comfort however the driver may grip it, and the leather-covered electronic shifter is canted slightly left for comfort and performance.

And there was one quality issue: The gear shifter became loose during testing and eventually disconnected from its stalk, which is probably a snafu during assembly but unforgiveable for Lexus. 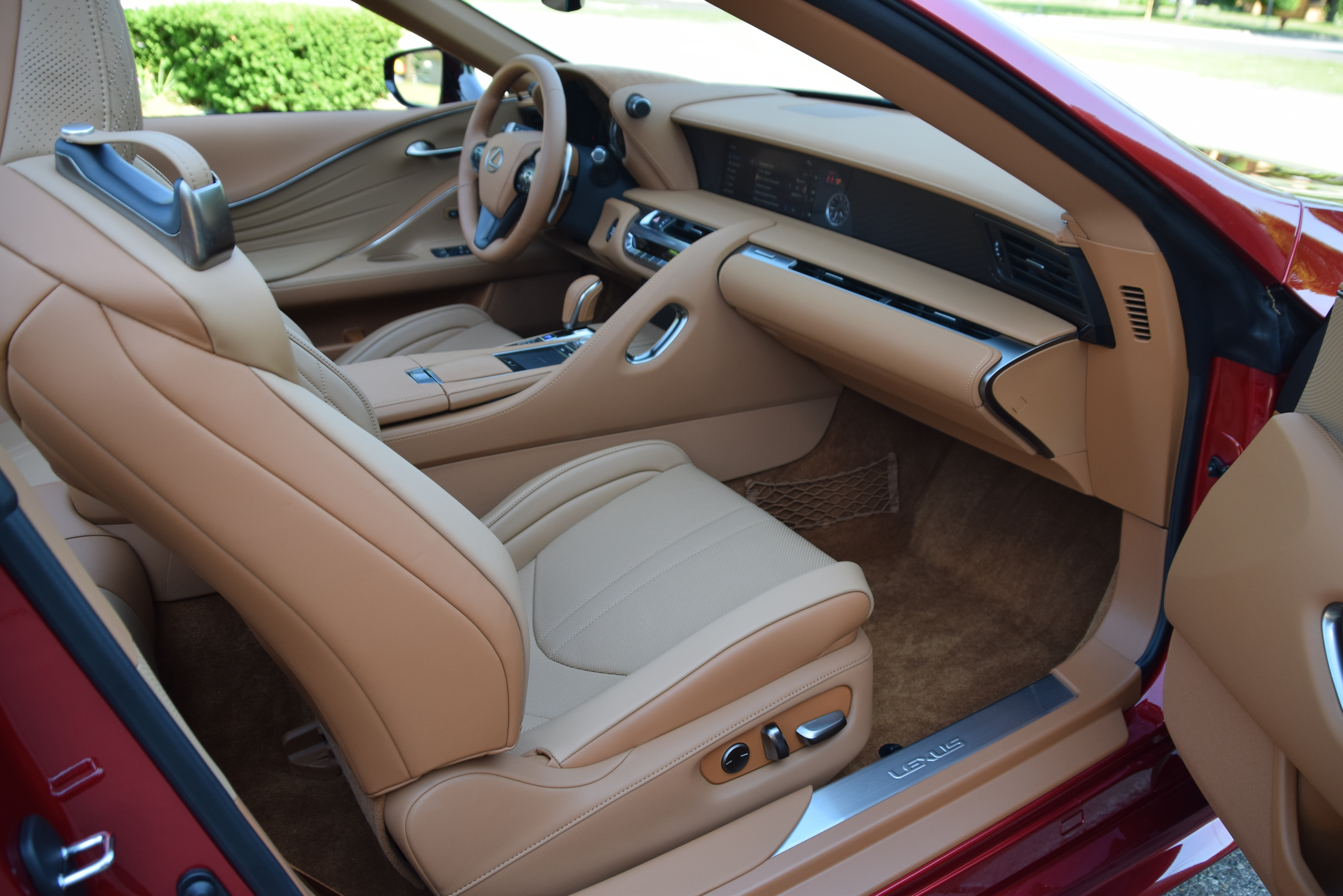 The passenger receives a grab handle that rises dramatically from the center console. Alcantara microsuede covers the A-pillar, floating interior door pulls receive a satin sheen and the pedals are finished in aluminum.

A 10.3-in. (26-cm) high-resolution split screen occupies the center of the dash, and the top of the dash smartly extends over the screen to reduce, but not entirely eliminate, glare during top-down driving. Right of the touchscreen is an elegant analog Lexus clock for some old-school charm. A single, race-oriented digital gauge delivers driver information such as speed, rpm, gear position and other essentials.

The gauge will shift right to expose vehicle and advanced driver-assistance settings. I liked the chunky knob for audio power and volume, as well as the motorcycle-grip-inspired dial for drive modes and traction control that extends from the hood of the IP.

Two USB ports and a 12V socket must satisfy all four passengers, although, like nearly every 2+2 coupe on the market, the LC 500 is really meant for two. I squeezed a couple of tween-agers in the rear seats for brief jaunt, but even their legs were nearly in their chests. There is a long list of standard ADAS technologies, but a head-up display will set you back $900 as optional equipment. However, that’s pocket change at this six-figure price point.

There is an unmistakable flow to the design of the LC 500 inside and out. It received down-to-the-detail attention from Lexus’ highly trained Takumi master craftsmen, who are assigned specific areas of the car-making process to apply their singular focus, stopping at nothing to achieve excellence. Of the thousands of engineers and designers within Toyota, only a handful can be called Takumi, and their passion is reflected throughout the LC 500. Flowing lines within the door panels, for example, are an extension of the dramatic lines carved into the hood.

Of course, the real charm of the LC 500 is open-air motoring. The top drops in a matter of seconds via an actuator hidden away nicely under an access panel of the center console. With the fabric top down and the Mark Levinson 13-speaker, 915-watt Reference Surround Sound Audio System blaring my favorite Sirius/XM Radio stations, even routine trips to the local Whole Foods store take on epic proportions. And yes, oftentimes I was guilty of prowling parking lots much too leisurely in a bid to show off the LC 500.But that’s one of the main reasons for purchase: “Look at me in my $112,000 convertible.”

Speaking of pricing, there are less expensive, good-looking performance luxury convertibles on the market. The all-new Chevrolet Corvette comes to mind, and the handling of the C8 is far superior. Yet the LC 500 is undeniably attractive, right alongside the best droptops from Mercedes-Benz and BMW. So, if a bit of self-indulgence is on the horizon, few cars fill the role as dashingly as the LC 500. 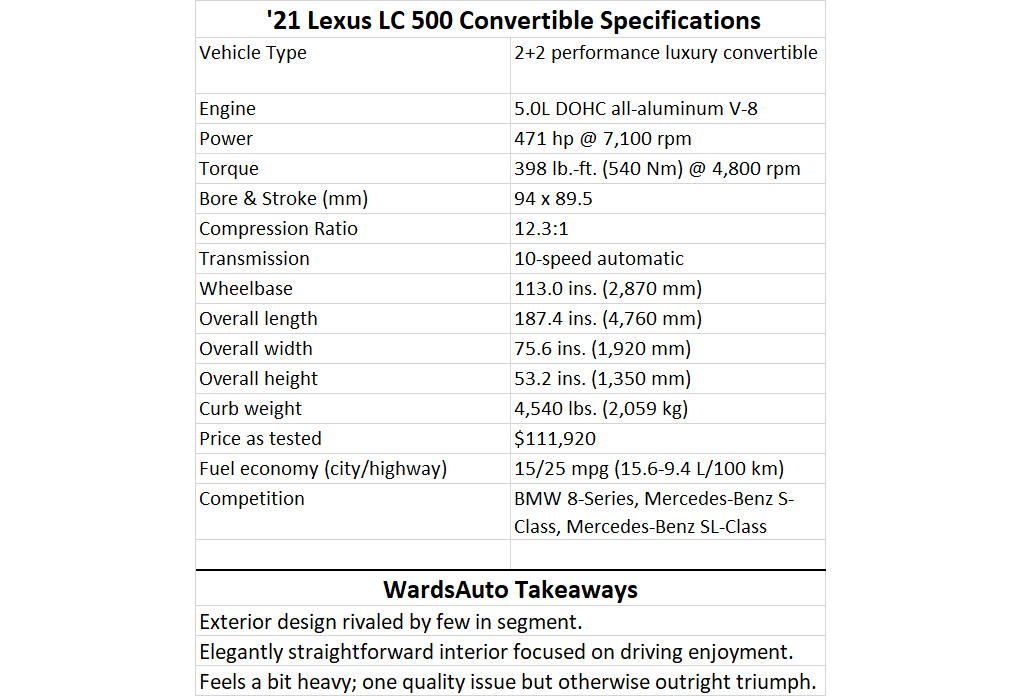