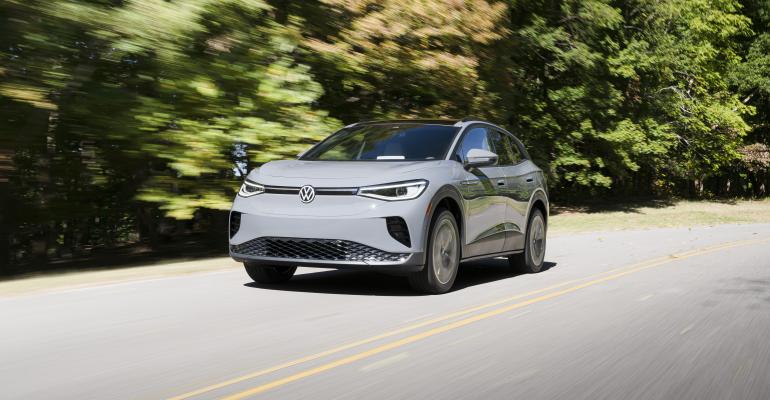 Volkswagen’s battery-electric CUV is a solid option for those wanting a more affordable BEV with good range and creature comforts.

NASHVILLE, TN – The Volkswagen ID.4, as one of the relatively older battery-electric vehicles on the market in the U.S., tends to fly under the radar.

The ID.4 arrived back in the pandemic summer of 2020 and in those two years newer, headline-making BEVs have arrived such as the Hyundai Ioniq 5, Ford F-150 Lightning and GMC Hummer EV.

While it’s true the ID.4 doesn’t have exactly the same attributes as those nameplates, namely 300 or more miles (483 km) of range, it’s still a solid choice for anyone looking at making the transition to a BEV and who drives only moderate distances.

For the 2023 model year, ID.4s sold in the U.S. will be assembled at VW’s Chattanooga, TN, plant vs. being exported from Germany, possibly allowing purchasers to take advantage of a new federal tax credit for electrified vehicles.

However, we spend most of the day in an AWD ’23 ID.4 Pro S grade. We travel in it from Nashville to Chattanooga, and find it a fun-to-drive BEV with good efficiency on higher-speed roads, a range-challenging type of driving for most battery-electrics.

We begin our journey with a 98% full battery, which our cluster display shows is good for 279 miles (449 km) of estimated range in Comfort (basically Normal) mode – plenty to get us the 206 miles (332 km) we are set to travel on a route VW has pre-selected. (It’s also higher than the 255 miles [410 km] of range our vehicle is rated for; it’s not atypical to see longer than stated range in a BEV charged and driven in warm weather.)

Later that day, urgency to get where we’re going sees us abandon that route and use a more direct one. In the end, we traverse 196 total miles (315 km), in just under five hours of driving, at an average speed of 40 mph (64 km/h). Pulling into our Chattanooga hotel, we have 28% battery SOC, equating to 86 miles (138 km) of range remaining, or three miles more than the 83 miles (134 km) we theoretically should have left. Our efficiency for the route comes in at 3.7 mi/kWh, teetering on the edge of great and, near as we can tell, better than most reviewers saw on their routes. In the interest of full disclosure, we confess to driving 5 mph (8 km/h) below the speed limit in the afternoon so as to retain range ahead of expected traffic congestion. Fortunately, the congestion wasn’t too impactful on range, and the ambient temperature not warm enough to necessitate setting the AC any lower than the 72° F (22° C) we had it on most of the day.

Last year, Wards gave the ID.4 a 10 Best UX award for its space-age user interface, high-definition touchscreen and overall serene switchgear, some of which, like the window switches, perform dual functions to minimize cabin clutter.

The refreshed ID.4 still boasts great-looking and performing infotainment features but has received behind-the-scenes improvements in software to combat buggy-ness, says a spokesman. Software also gets over-the-air update capability and sees the Plug&Charge charging standard added, the latter simplifying the charging process for BEVs that carry it – meaning less time spent fussing with charging apps on your phone.

We encounter no bugs while using infotainment, at least that aren’t meant to occur. One frustration is a pop-up when trying to zoom in on the navigation screen, warning us to keep our eyes on the road but overlaying the entirety of what we are trying to view, thus causing us to wait out its disappearance (i.e. keep our eyes off the road longer) to see what we need to see. 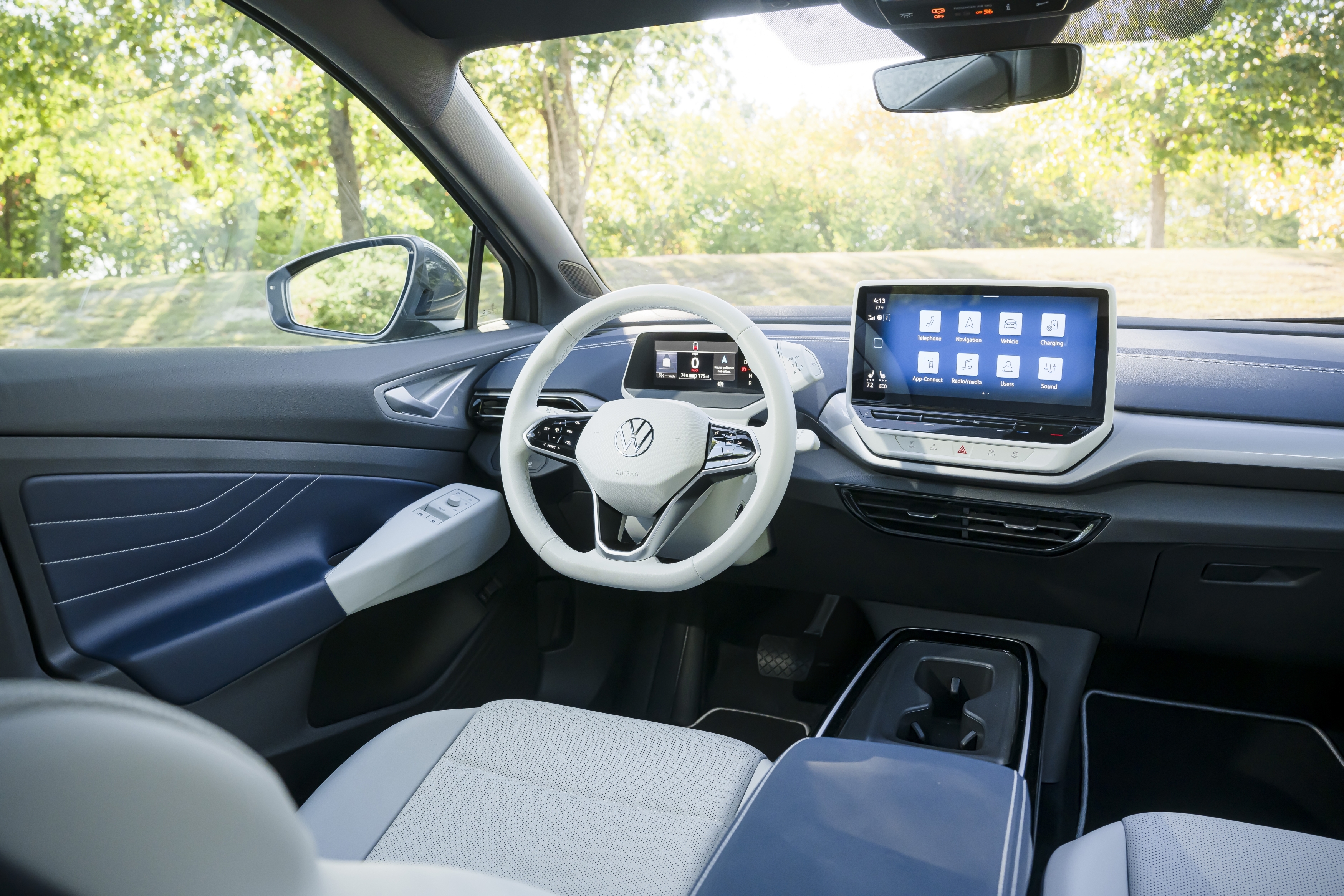 The ID.4 interior already was attractive. Our spring 2021 test vehicle had white and red-brown color scheme. Our tester here has an equally cool blue, black-and-white scheme, but ID.4s now have some better-quality materials, including a faux leather replacing cloth in base models, as well as Nutmeg (brown) and Stone (gray) themes. The S grade we test still comes with faux leather but has two new themes, including ours called Cosmic and another dubbed Galaxy (gray and black). The blue leatherette on the doors is a favorite element, thanks to geometric white stitching. Hexagonal perforations on seats amplify the cool geometric style.

Despite our tester being a pre-production model, we noticed no problems with fit-and-finish.

The cabin is roomy and comfortable too, with a new, proper fixed center armrest a feature for ’23.

Here and there we use adaptive cruise control and find its performance on par with other ACC systems in the industry, which is to say “average.” We like how our CUV continues at a normal, non-sluggish pace when a vehicle we’re trailing makes a left, but shortly thereafter there is a not-unexpected fast approach to stopped traffic at a red light, as we have no vehicle immediately ahead slowing down first. As we always note, ACC is not self-driving technology, and a driver should be ready to intervene.

Despite moments when ACC is off, steering-assist technology remains on. Steering assist often can be bothersome, but we find the ID.4’s helpful in tracing the numerous curving roads of rural Nashville.

A minor quibble during our time in the Pro S is grabby brakes in Comfort mode, but strangely not in Eco mode where you would expect it.

We get only a short jaunt in a prototype of the new standard-range ID.4 going into production later this year in Chattanooga. The driving character is similar to the AWD Pro S, including direct steering, but we have a very short urban test route so it is difficult to make a full assessment. We look forward to more seat time in the new base model soon.

Again, this doesn’t have the 300-mile ranges of some of the newer, flashier BEVs available in the U.S., but the rear-wheel-drive 82-kWh pack’s 275 miles (443 km) likely could result in 300 miles of range in warmer ambient temperatures.

Despite the long-range Pro’s $5,000 price increase for ’23, its $43,790 sticker is a pretty good deal considering the new Toyota bZ4x and Subaru Solterra twins cost about the same, but have about 20 miles (32 km) less range than similar grades of the ID.4.

While the ID.4 doesn’t charge as quickly as the Ioniq 5 with its 800V architecture, its max charging speed of 170 kW is respectable. The ID.4 also has more free fast charging, three years’ worth, than the Hyundai, as well as the Toyota.

The Ioniq 5 is priced similarly, but scarcer than the VW due to production constraints. The shift of the ID.4 to Tennessee for North American buyers is expected to result in relatively big production numbers for a BEV, perhaps the biggest capacity of any model in the near term from a legacy automaker. VW says it could possibly hit, in a world free of supply-chain disruptions, 90,000 builds next year in Chattanooga, but 70,000 is a more realistic target.

That would be a monumental leap considering U.S. ID.4s sales January-September this year tallied less than 7,000, Wards Intelligence data shows. The refreshed ’23 model and large, local production capacity should help inch that up. 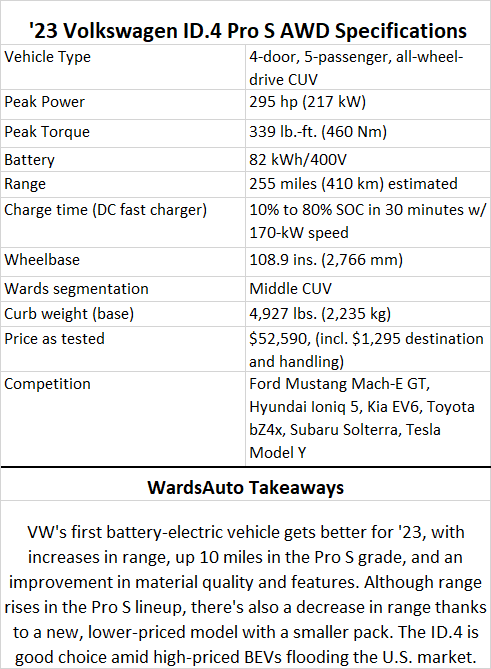