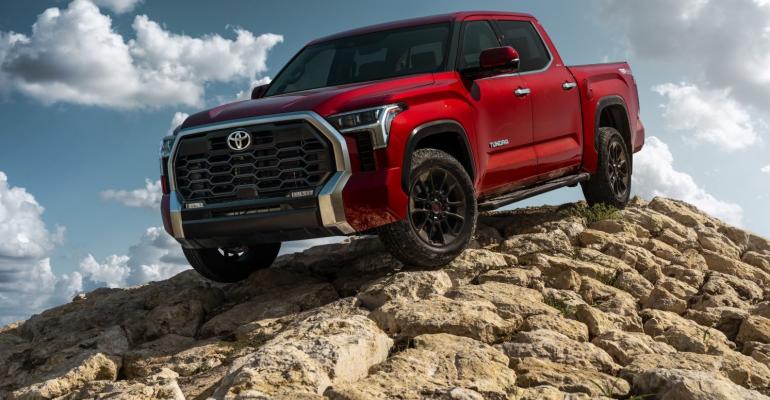 The all-new Tundra comes with two turbo V-6 powertrain options, a new multi-link rear coil suspension for better handling and a work-focused interior. There’s plenty to like about the new Tundra, even if the updates seem incremental in a rapidly evolving truck segment.

But truck buyers understand all of these varieties exist because people buy trucks for different reasons. If you want to pull the 2022 Tundra’s maximum tow weight of 12,000 lbs. (5,443 kg), you’ll need to pick the 4x2 Double Cab in SR5 trim with the 3.5L V-6 and the 6.5-ft. standard bed, for example.

The re-engineered Tundra (pictured below) is unquestionably a capable, powerful truck full of the bells and whistles that should make anyone shopping for a half-ton pickup take notice.

From ease-of-life enhancements such as hands-free trailer backup capability to the full suite of Toyota Safety Sense features, from straightforward benefits like a new hybrid powertrain to the new multi-link rear coil suspension thanks to a new platform, there’s plenty to like about the new Tundra.

It arrives as truck buyers are getting excited about alternatives, both in size and powertrain options. People who might have bought a fullsize truck can now at least consider the smaller Ford Maverick or Hyundai Santa Cruz, or even the all-electric Rivian R1T or Ford F-150 Lightning. 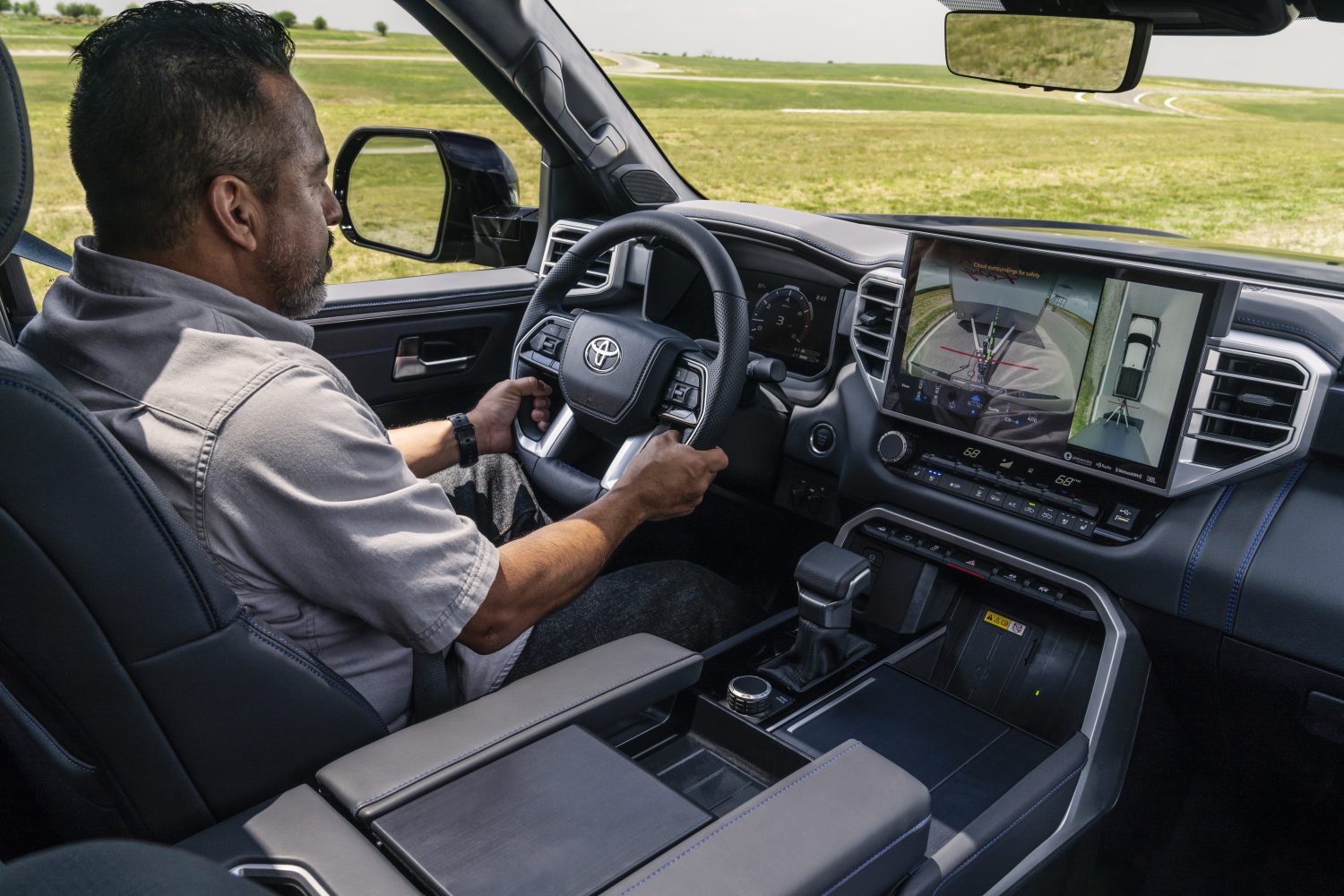 Shoppers of the ’22 Tundra will choose between the i-Force and i-Force Max powertrains.

A clutch allows the engine to disconnect when it’s not needed, which is why the air conditioner and water pump are now electrically driven so they can operate with the engine off. The hybrid battery is housed under the rear seats. All new Tundras use a 10-speed automatic transmission. 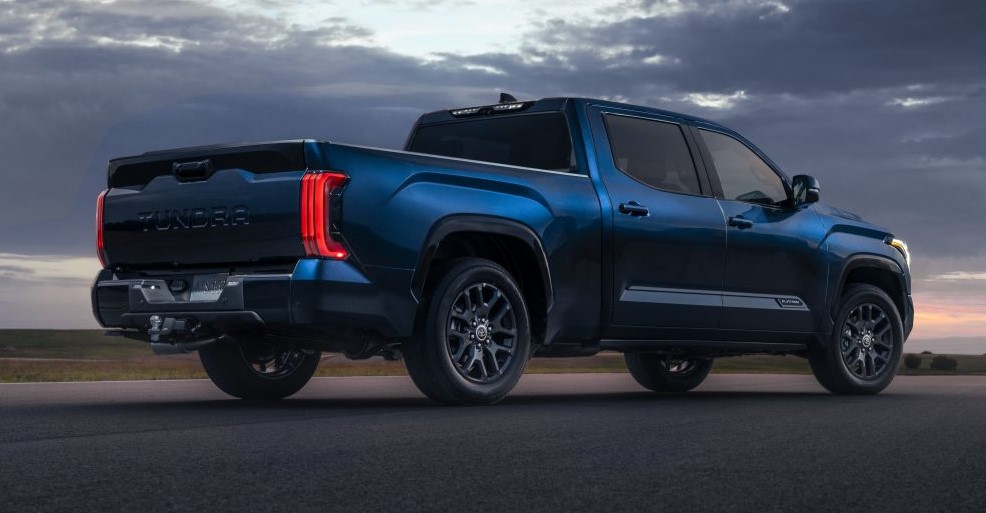 Unlike the previous-generation Tundra, the new truck (pictured above and below) will not offer a V-8, something other truck manufacturers continue to rely on for brute strength.

After driving both new powertrains here near the Tundra assembly plant, we can say the truck accelerates with purpose, especially with the hybrid option. No one should need more proof that electric motors deliver big benefits – the V-8 isn’t really missed at all.

No matter which powertrain is underhood, it will be difficult to mis-identify the new Tundra, as Toyota certainly has joined the “bigger is better” grille club here. Up to seven different grilles are available, depending on trim level and other factors. 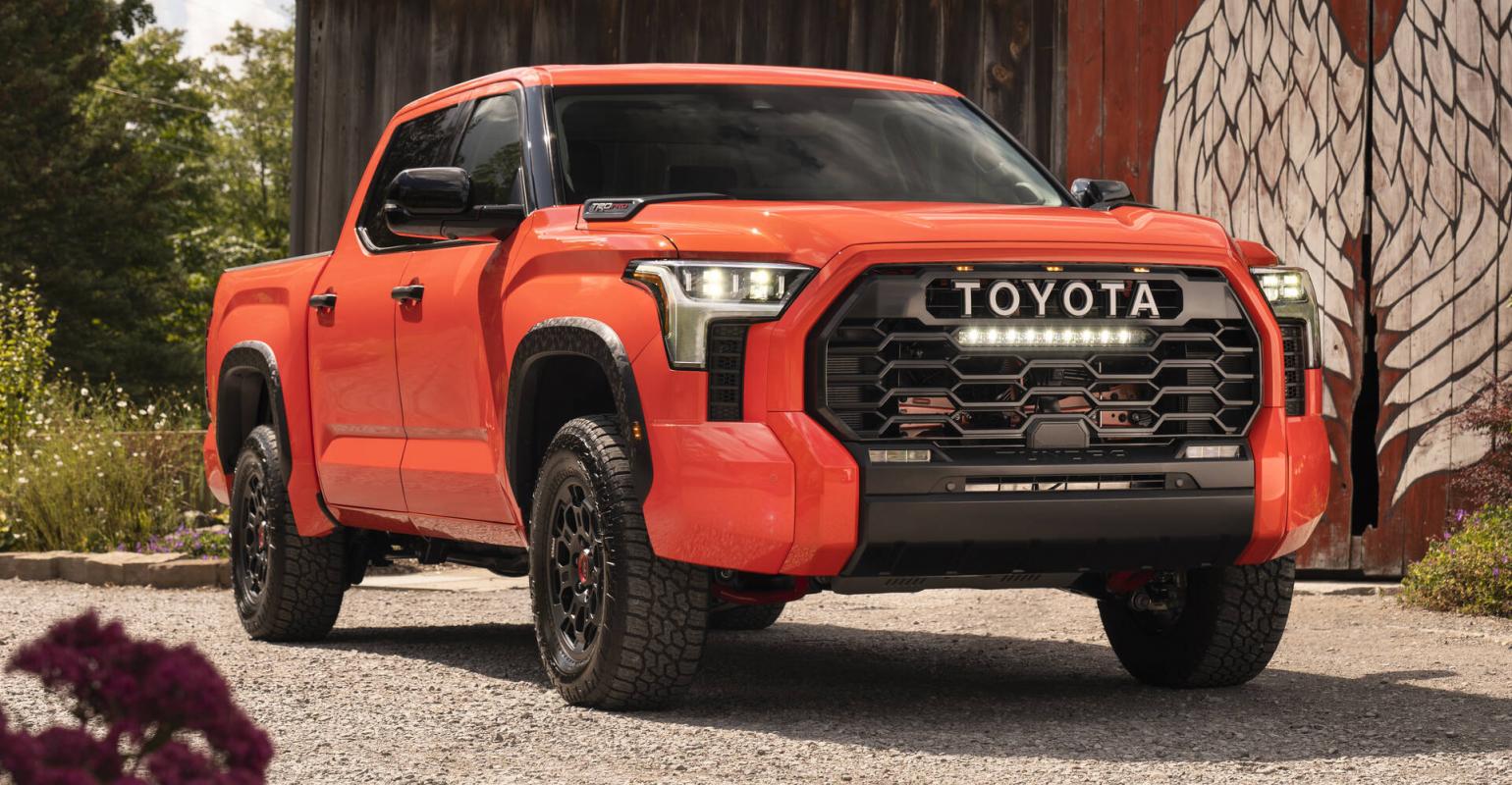 Exterior lines are relatively simple, and muscular sheetmetal accents the wheel arches and sides. The head- and taillights are well integrated and don’t call too much attention to themselves. It’s not the most stylistically aggressive truck, thankfully, but it should suit those who like a vehicle that looks a little mean.

Toyota made more substantial improvements inside the cabin, whether that’s the double cab configuration in the SR, SR5 and Limited trims or the larger Crewmax available on all trims, including 1794, Platinum and TRD Pro (second row pictured below).

The interior is work-focused, with big, chunky buttons and design effects. It all comes across as appropriate. Offering physical buttons with understandable functionality means the dash is unlikely to feel dated any time soon, which is a good thing. 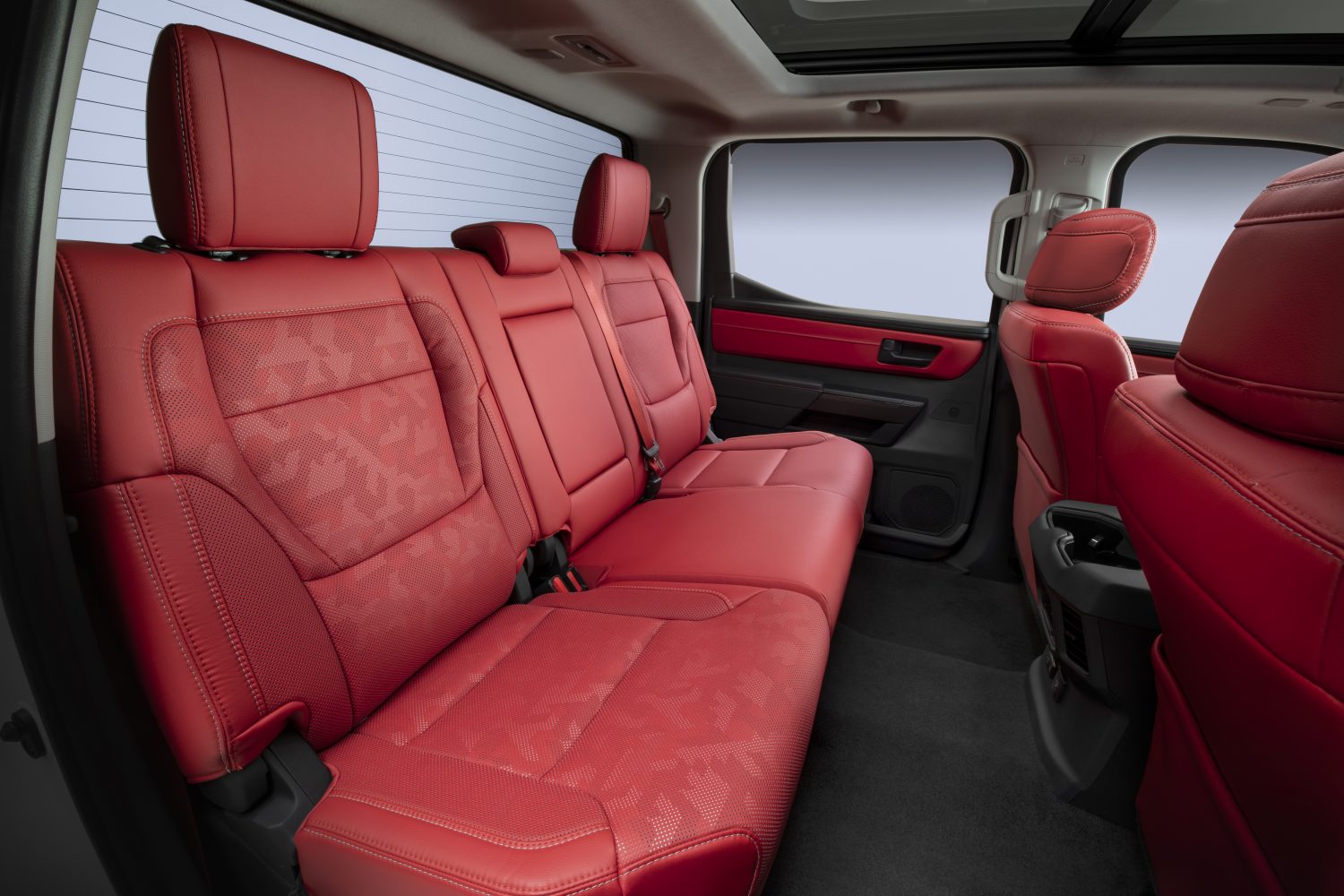 This is the first Toyota vehicle that uses the new Toyota Audio Multimedia software, which looks good on either the available 14-in. (36-cm) infotainment touchscreen or the standard 8-in. (20-cm) display.

Previously available only on the Lexus NX, this new software is an important upgrade for Toyota, allowing “Hey, Toyota” voice activation of some features such as the navigation and audio player, but not things like heating and cooling or controlling your phone when used through the wired or wireless Android Auto or Apple CarPlay connections.

Despite the voice limitations, the new system offers snappy responses and a clear, user-friendly map. The way the map fades at the top of the screen, mimicking the horizon, is a nice touch.

For those going off-road, Downhill Assist Control and Crawl Control are meaningful new technologies in tricky situations. You can turn on Crawl or DAC only once the truck is in Drive. If you shift the truck into Park after setting the mode, it will beep several times to make sure you know it’s been disengaged. 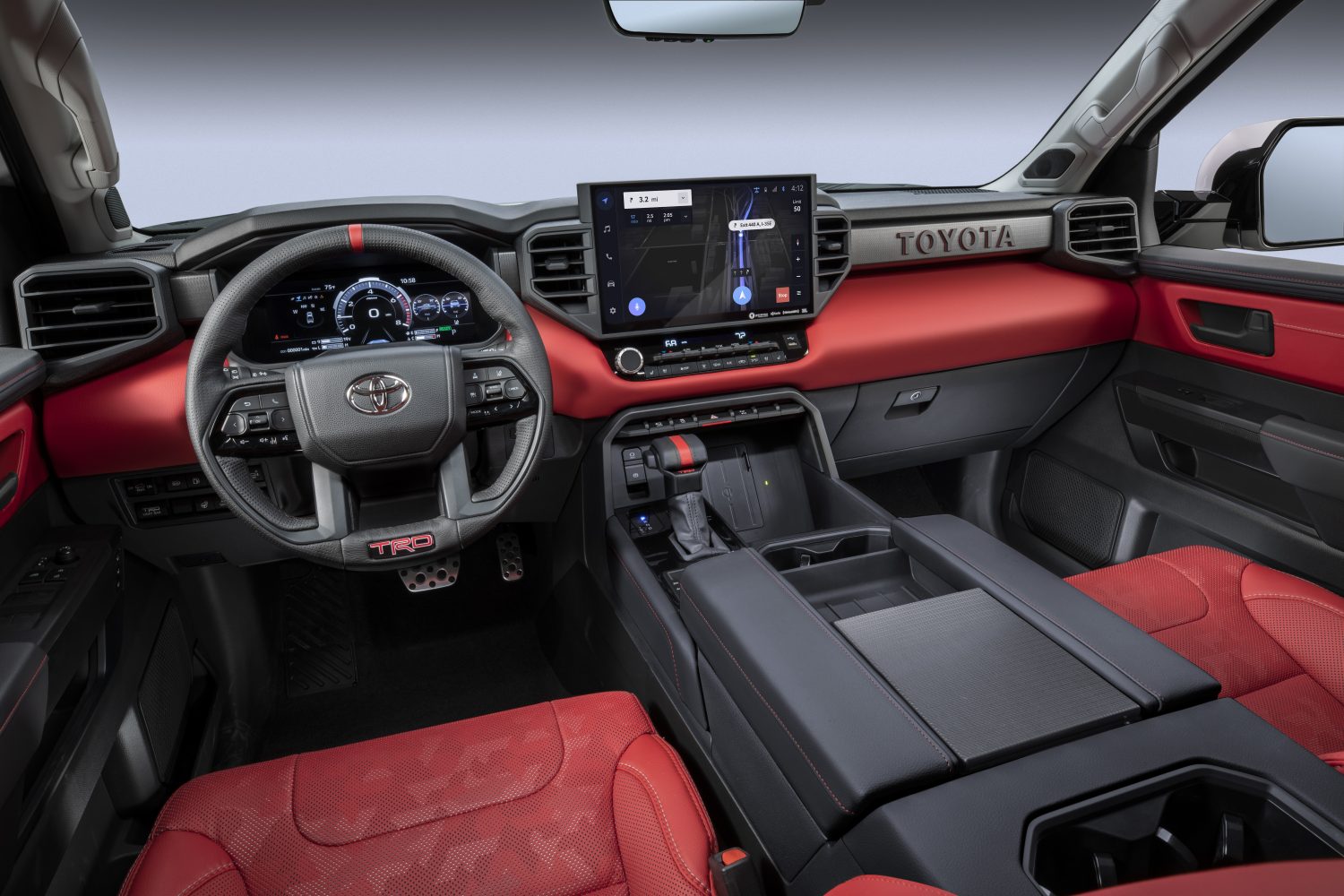 Besides the new coil-spring rear suspension, which makes a huge difference in driving comfort, you can also get a self-leveling rear air suspension with adaptive dampers. The Adaptive Variable Suspension, new to the Tundra, is designed to adjust damping force regardless of the road surface.

The 2022 Tundra goes on sale in December, and Toyota executives expect it to exceed the 100,000 annual sales that have been recorded in past years. Pricing information will come closer to launch.

The truck is more than competent, but it doesn’t really move the ball forward in a segment that is evolving rapidly to include smaller and fullsize battery-electric offerings.

As long as we’ve waited for this third-generation Tundra, what’s more exciting is what might come next. 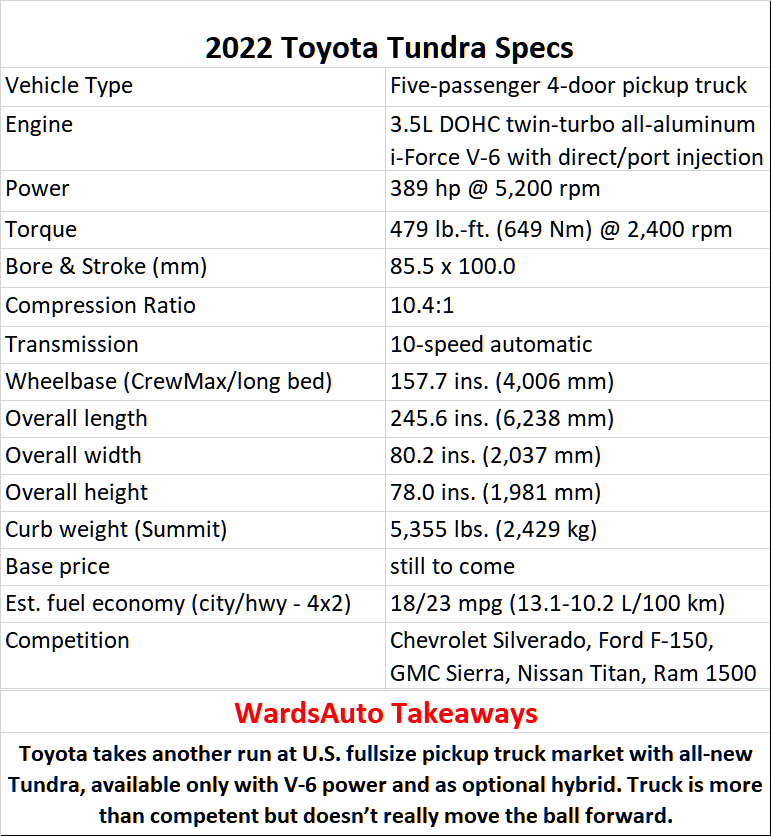