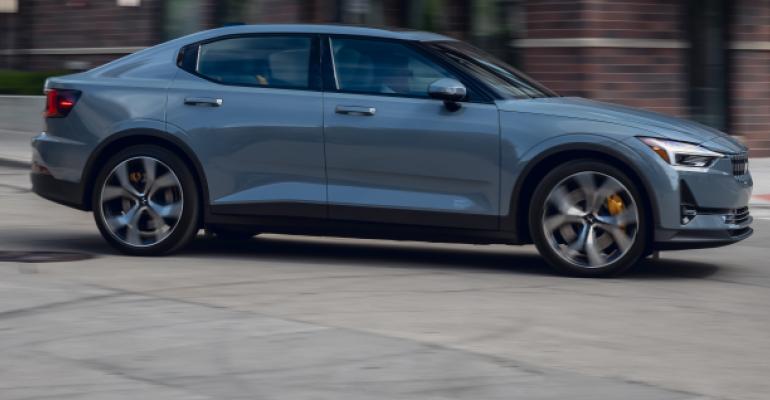 Polestar
Single-motor version of Polestar 2 BEV arrives in December or January, depending on the market.
Vehicles>Test Drives

With incentives, the new single-motor Polestar 2 can be had for $36,200. But is it better than a Tesla Model 3?

SANTA FE, NM – If America is going to turn into Joe Biden’s whirring, purring electric-vehicle paradise, consumers are going to want battery-powered cars that are price- and content-comparable to existing internal-combustion vehicles.

Enter Polestar, the EV offshoot of Geely and Volvo, which launched with its $150,000 Polestar 1 hybrid coupe and followed with the battery-electric Polestar 2 dual-motor hatchback costing upward of $60,000 in top trim. Hardly affordable.

But with a single-motor version of the Polestar 2 arriving in December or January (depending on the market), the Sino-Swedish automaker is trying to cross the chasm into the average American household budget.

With federal and certain green-loving state tax credits factored in, a base-model Polestar 2 boasting 265 miles (426 km) of range can be had for as little as $36,200. That’s four grand less than the transaction price for the average new vehicle purchased in 2021.

It’s also considerably less than the competing Tesla Model 3, which starts at $41,190 and which no longer is eligible for the $7,500 federal EV incentive.

So the question is: Does the Polestar 2 feel like a proper car at its price point?

While Polestar will build future models on bespoke BEV platforms, it is making the most of sharing the 2 on Volvo’s CMA platform with the Volvo XC40 and XC40 Recharge.

In this case, there are enough upscale Volvo-ish touches that the Polestar 2 doesn’t feel like an all-nighter science project like some BEVs. And as the XC40 Recharge comes only in premium dual-motor fitment for its $55,085 sticker price, getting a single-motor Polestar 2 can feel like getting a great deal on a Volvo.

The single-motor Polestar 2 uses the same inverter, motor and electronics as it does in the dual-motor setup.

The front motor’s horsepower reaches 231 instead of 204 because the 78-kWh lithium-ion battery pack (75 kWh of which is usable to save on stress) is sending power in one direction instead of splitting it between the front and rear wheels. 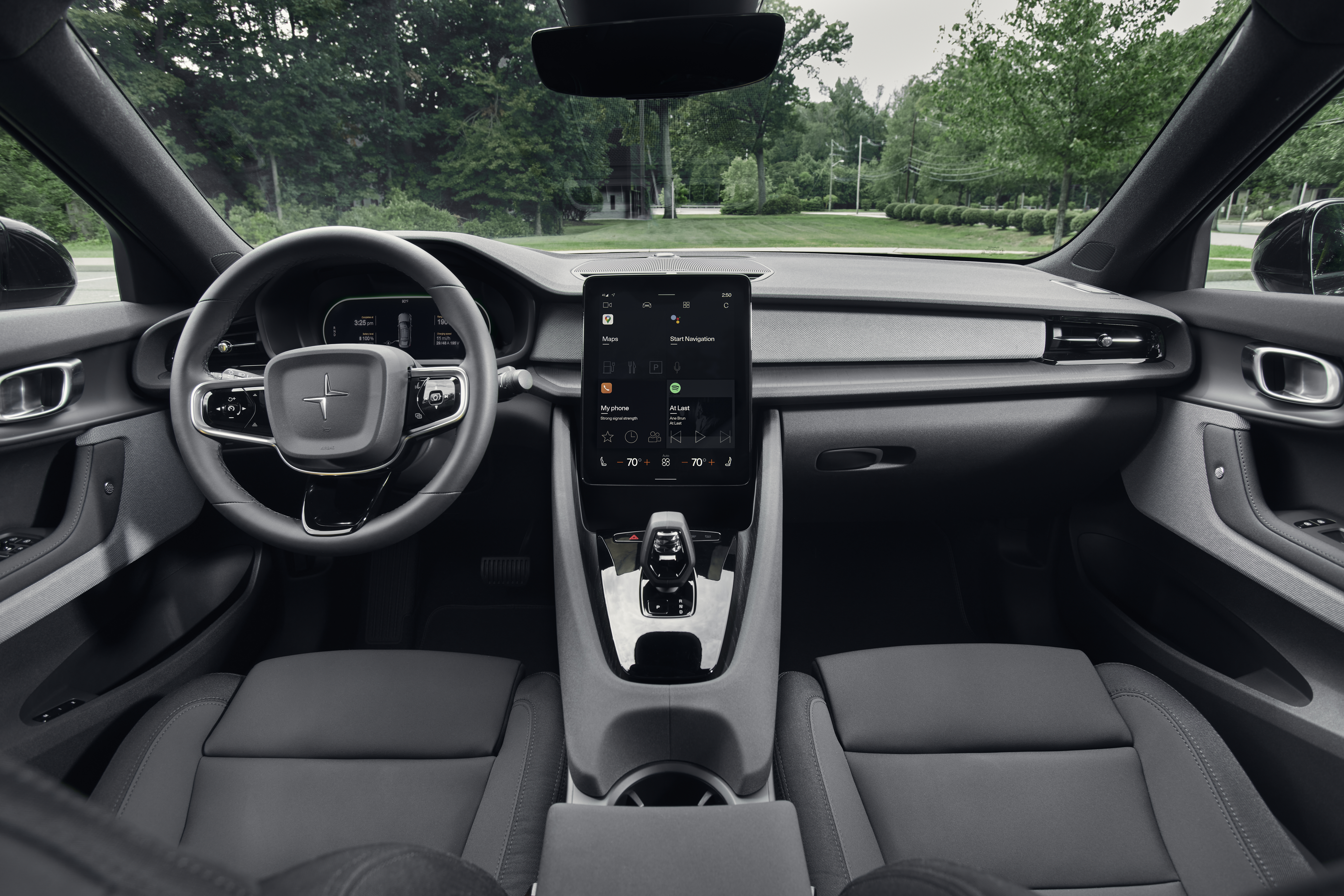 The Polestar 2 now allows for 155-kW DC charging (and with over-the-air software updates, this applies to all Polestar 2s already sold). That means 33 minutes to get from 10% to 80% state of charge. It takes eight hours on an 11-kW Level 2 home charger.

Inside (pictured above), occupants are greeted by 3-D embossed textiles that are fully vegan and made mostly from plastic-free recycled materials.

The sweep and flow of the interior is Volvo-esque, although Polestar is limited to a more restrained grayscale.

“You can still see Volvo DNA in Polestar,” said Gregor Hembrough, head of Polestar of the Americas. “When you look at our future products, you’ll see a true demarcation between Volvo and Polestar.” 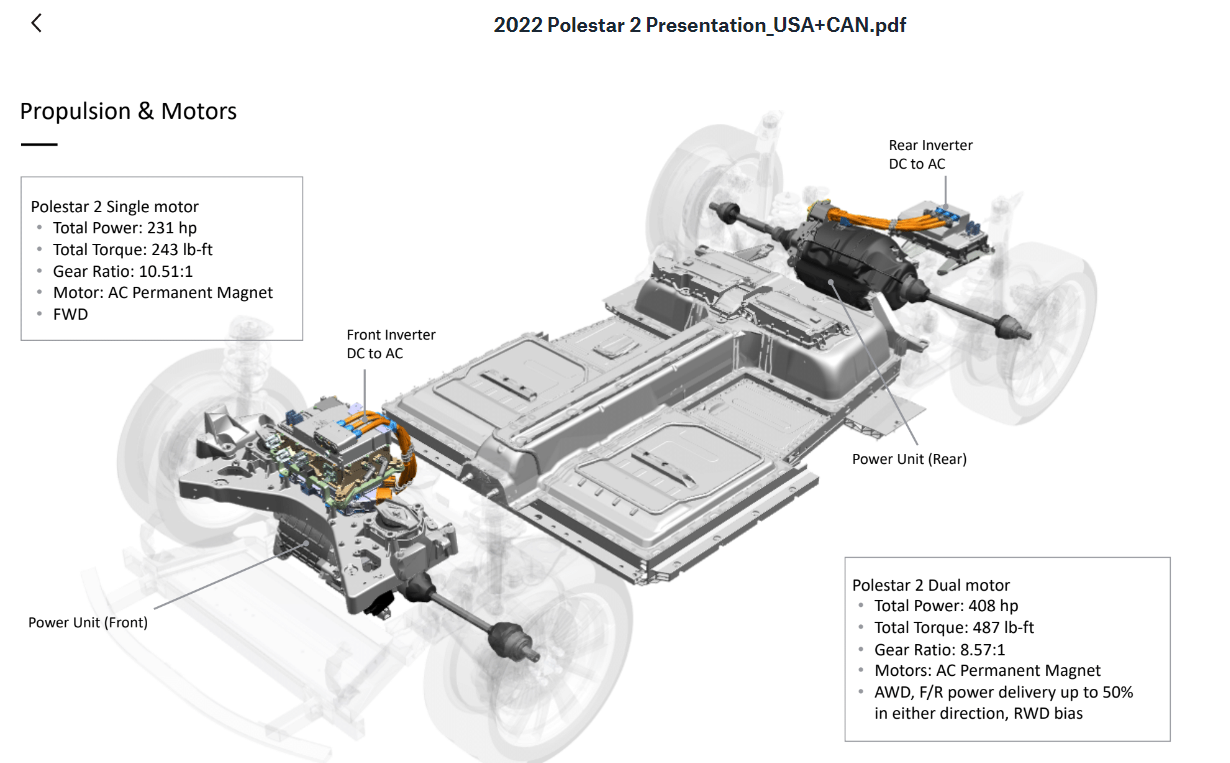 We drove the lowest-price version of a Polestar 2 single-motor (schematic above) to see what you get. Adjusting the front-seatback’s rake requires hand-cranking a large scroll-wheel.

The seats come in two eco-friendly fabrics that are quite comfortable, and also available in leather. But there’s a hard, unforgiving surface where your right knee rests against the center console.

Backseat space is snug if you’re sitting behind a 6-foot tall (1.8-m) driver, and ingress and egress is a head-clonking affair for taller backseat passengers in navigating the smallish rear door frame.

For the driver, there’s a pretty large blindspot to the right-rear of the car. The stock 19-in. wheels generate a substantial amount of low-frequency road roar in the cabin – bearing in mind the lack of an internal-combustion powertrain tends to magnify external noises.

Sunbelt residents will rejoice at the deletion of the scalp-scorching glass roof for a standard steel panel. The glass roof remains optional. Polestar also is switching to a mechanical heat pump with the Plus Pack option, which can increase range 10% in cold climates.

Like the Tesla, the Polestar 2 (pictured below) allows customizing of vehicle responsiveness in steering feel, regenerative braking and “creep” when stopped – and the adjustments really do make a difference.

You can make the driving adjustments on the fly to suit road conditions via the Google-powered telematics system. But even in its firmest setting, the steer-by-wire system feels vague, and the fullest regenerative-braking setting is akin to an abrupt application of the brake pedal. The “standard” settings seem the best option. 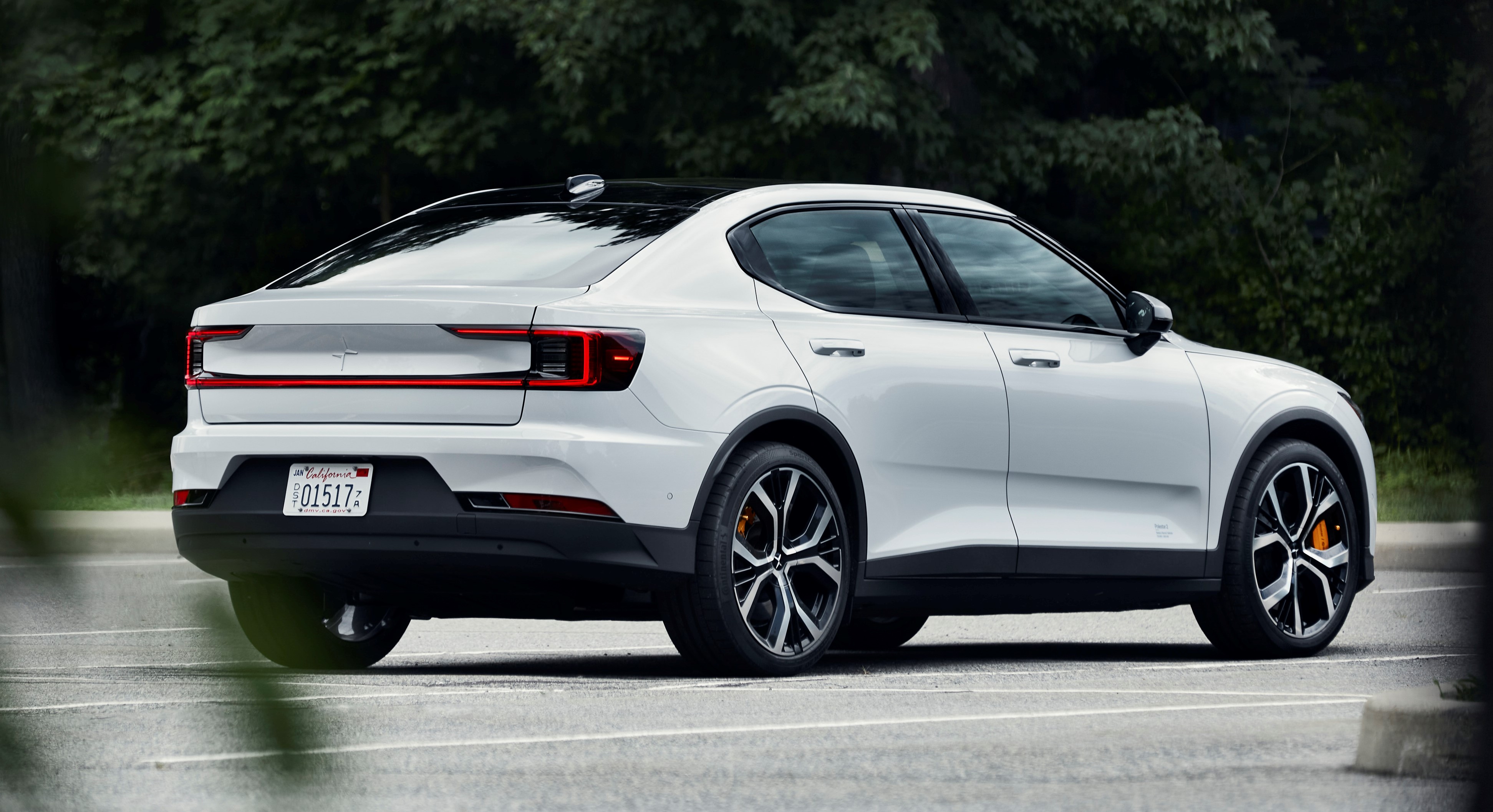 Suspension response, however, can only be done to the dual-motor version, and only by crawling under the car and adjusting the Öhlins dampers that come with the optional $5,000 Performance Pack.

Therein lies a strong negative with the Polestar 2 single-motor. On anything but velvet-smooth roads, the 2’s suspension is jarring, with impacts transmitted forcefully into the cabin.

What’s more, road vibrations are felt in the steering wheel, resulting in some hand numbness from repetitive road rash. Normally, that is the tradeoff for supreme handling, but the Polestar 2 is agile for no other reason than its relatively compact size and low-slung battery pack.

It’s not a thrilling driving machine, though moving up to the optional 20-in. wheels helps.

The Google-based infotainment interface is intuitive and easy to navigate between vehicle settings, navigation and audio preferences on the 11.2-in. (28-cm) center-stack screen. “Hey Google” is far better at speech recognition than pretty much every bespoke OEM system. Owners get three years of AT&T data connectivity, but CarPlay, Alexa, SiriusXM and Plugshare are still in the pipeline (expect over-the-air updates once available).

While the Polestar 2 hasn’t been crash-tested by NHTSA or IIHS, it did receive a five-star NCAP rating in Europe. The car features dual-center airbags that run down the center of the car (pictured below), to keep front occupants from hitting each other during a side-impact crash. 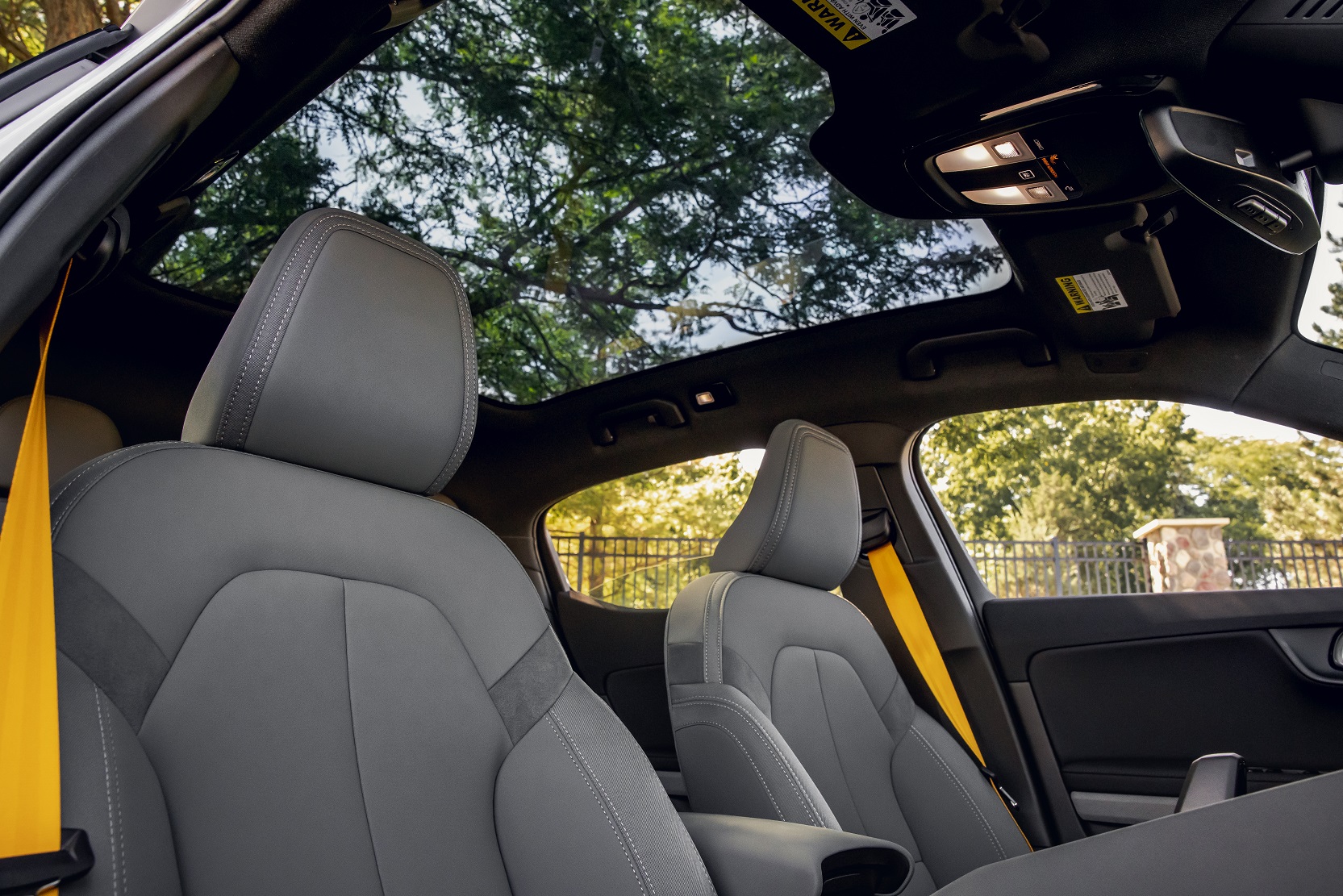 The collision-avoidance system will help steer the car if it senses it won’t brake to a stop in time. And its driver-assistance system informs other similarly equipped cars of the location of any traction-control incident.

At this price, the Polestar 2 single-motor is going up against world-class internal-combustion cars like the BMW 3-Series and Mercedes C-Class, and as such, it falls short.

But with EV incentives, it finds itself in an interesting price bracket – a tad more expensive than the Volkswagen ID.4 and Hyundai Kona, overlapping the Ford Mustang Mach-E, and cheaper than the Tesla Model 3.

So the Polestar 2 single-motor makes a compelling pitch to be a daily driver. 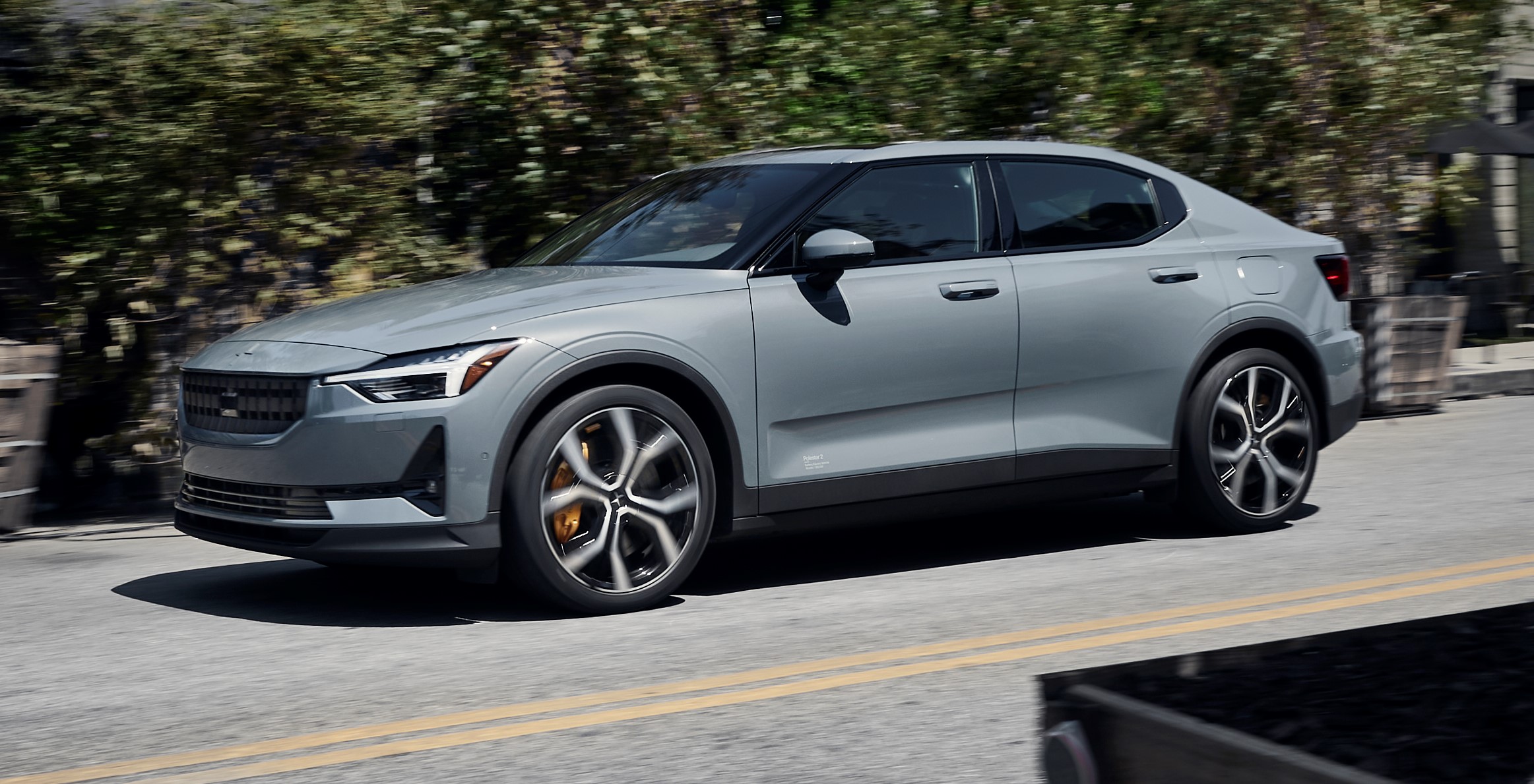