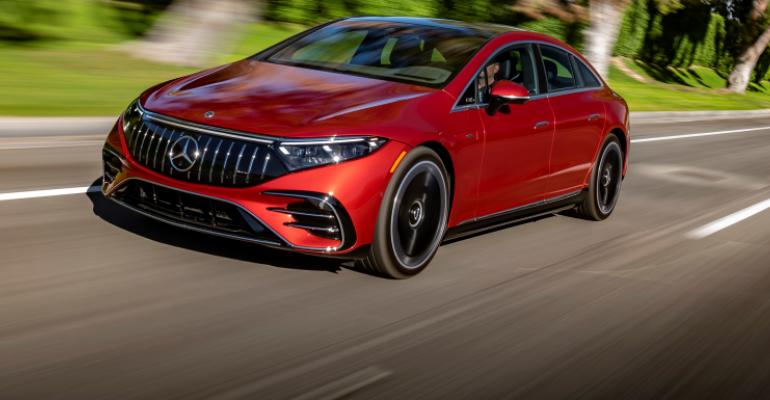 The first all-electric AMG sedan doesn’t feel as different from its tamer counterpart as we expected, but there may be more to come.

When AMG expanded from a performance option for Mercedes-Benz to a sub-brand in 2017, a Mercedes-AMG version of almost all its models seemed guaranteed.

But it wasn’t clear whether this would apply to the new battery-electric models Mercedes is now rolling out.

We now know the answer: Yes, there will be electric Mercedes-AMG performance models – and probably ultraluxury Mercedes-Maybach versions, too. 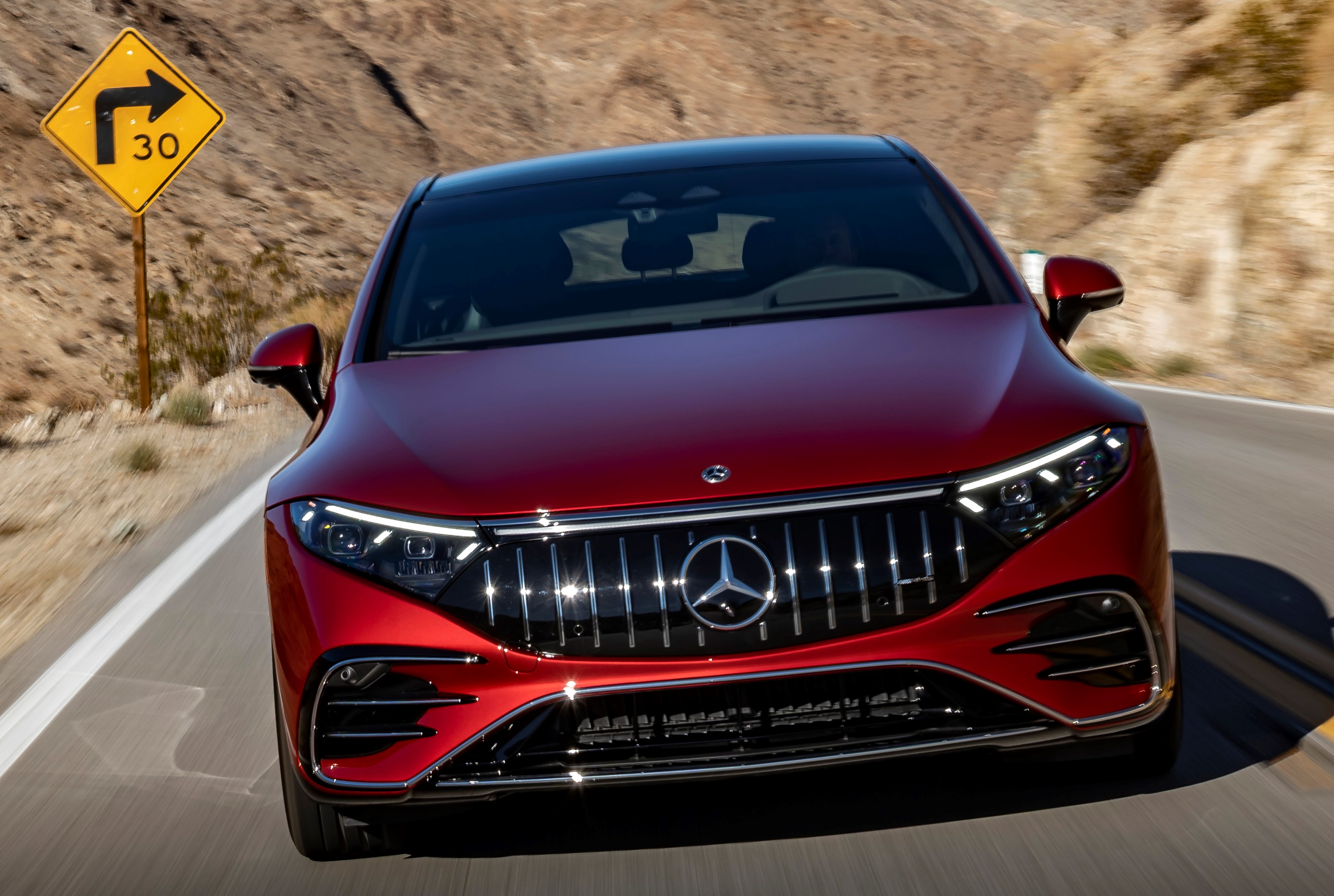 The 2022 Mercedes-AMG EQS 53 (pictured, left) was previewed to the auto press in mid-December, along with the latest iteration of the SL roadster (now sold only as a Mercedes-AMG, nodding to the SL’s performance roots in the 1950s). It’s the AMG version of the 2022 Mercedes-Benz EQS that went on sale late this year.

It’s not actually the first all-electric AMG model. That title goes to the SLS AMG Coupe Electric Drive, of which several dozen were made starting in 2013. That was a very-low-volume, special-order vehicle that was as much experiment as production car.

The EQS 53 is a standard part of the EQS range that’ll be sold by Mercedes dealers across North America.

Regrettably, our drive in the EQS 53 was curtailed by unseasonably raw, rainy weather in Palm Springs, CA – renowned for its dry, sunny desert climate.

The AMG EQS (pictured above, and below) is something of a barn-burner, as expected. But truly explosive acceleration is really only available when it’s in Sport+, the most extreme of five drive modes.

Otherwise, it’s a smooth and relatively fast electric luxury sedan. We find the Comfort and even Sport modes close enough to a standard EQS 580 4Matic (tested over 900 miles [1,450 km] this past Thanksgiving) that we’d be hard-pressed to cite notable differences.

So we didn’t get a chance to hurl the EQS AMG through truly twisty roads, though we searched for some. A winding two-lane highway under repair, with narrow and variable lanes, indicated the big sedan was easily controlled with well-composed suspension. 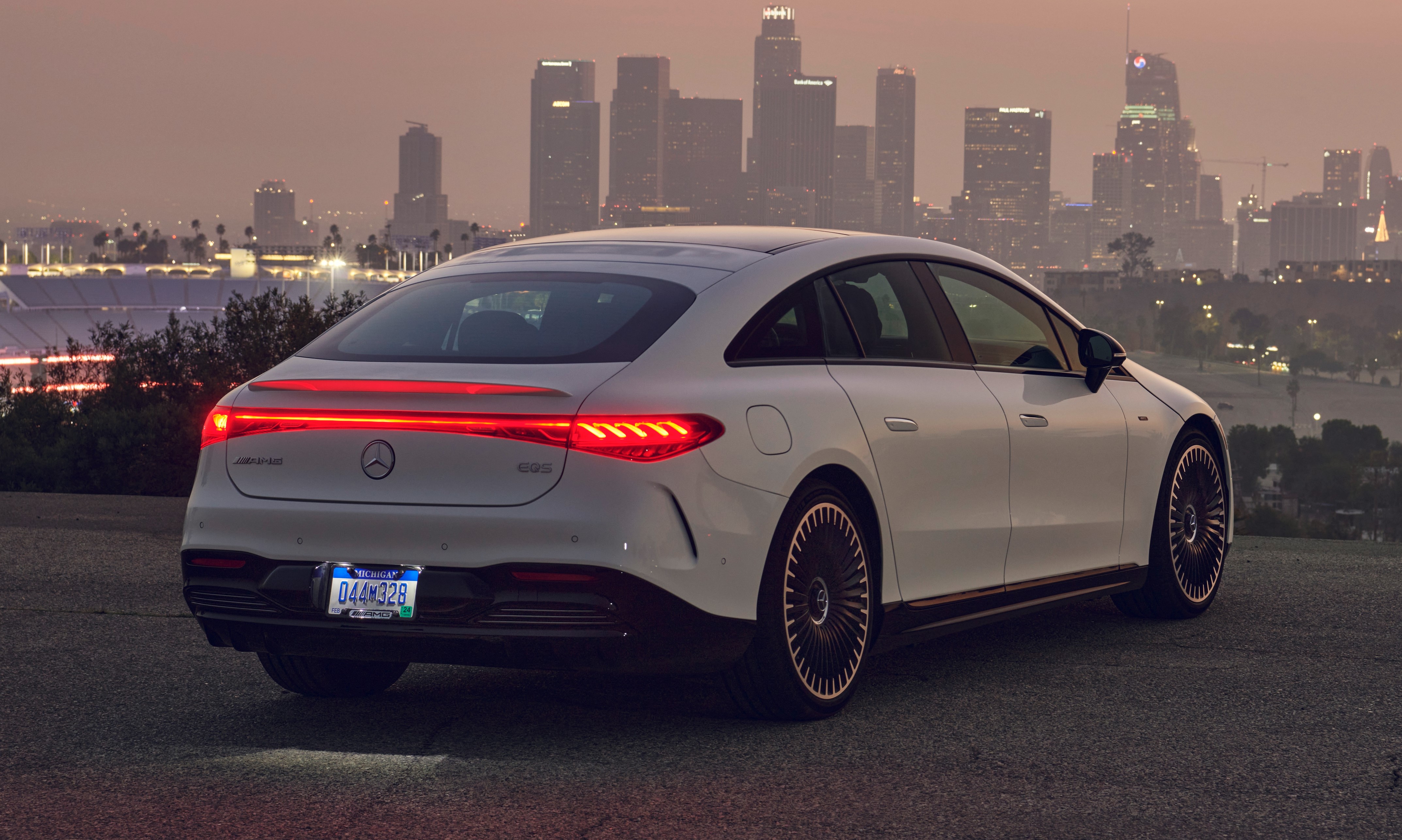 Drivers have multiple options for mixing settings for drive mode, suspension firmness, and the car’s synthesized sounds. They can be selected through its huge central Hyperscreen display, but it’s easier to use the pair of round, illuminated buttons hanging off the bottom of the steering-wheel hub (pictured below).

After experimenting with the Comfort and Sport modes, we leave the AMG EQS in its most rewarding drive mode: Sport+. The Sport setting for the suspension proved the best compromise between road feel and ride harshness, and we immediately turned off the sound.

Oddly, the Off setting for cabin sound is called “Balanced,” while the two levels of synthesized spaceship tones are “Sport” and “Powerful.”

Aside from some background whine, all EQS versions are remarkably quiet inside, even when thrusting the car forward at impressive rates: Mercedes-AMG quotes a 0-to-62-mph (100 km/h) acceleration time of only 3.4 seconds. 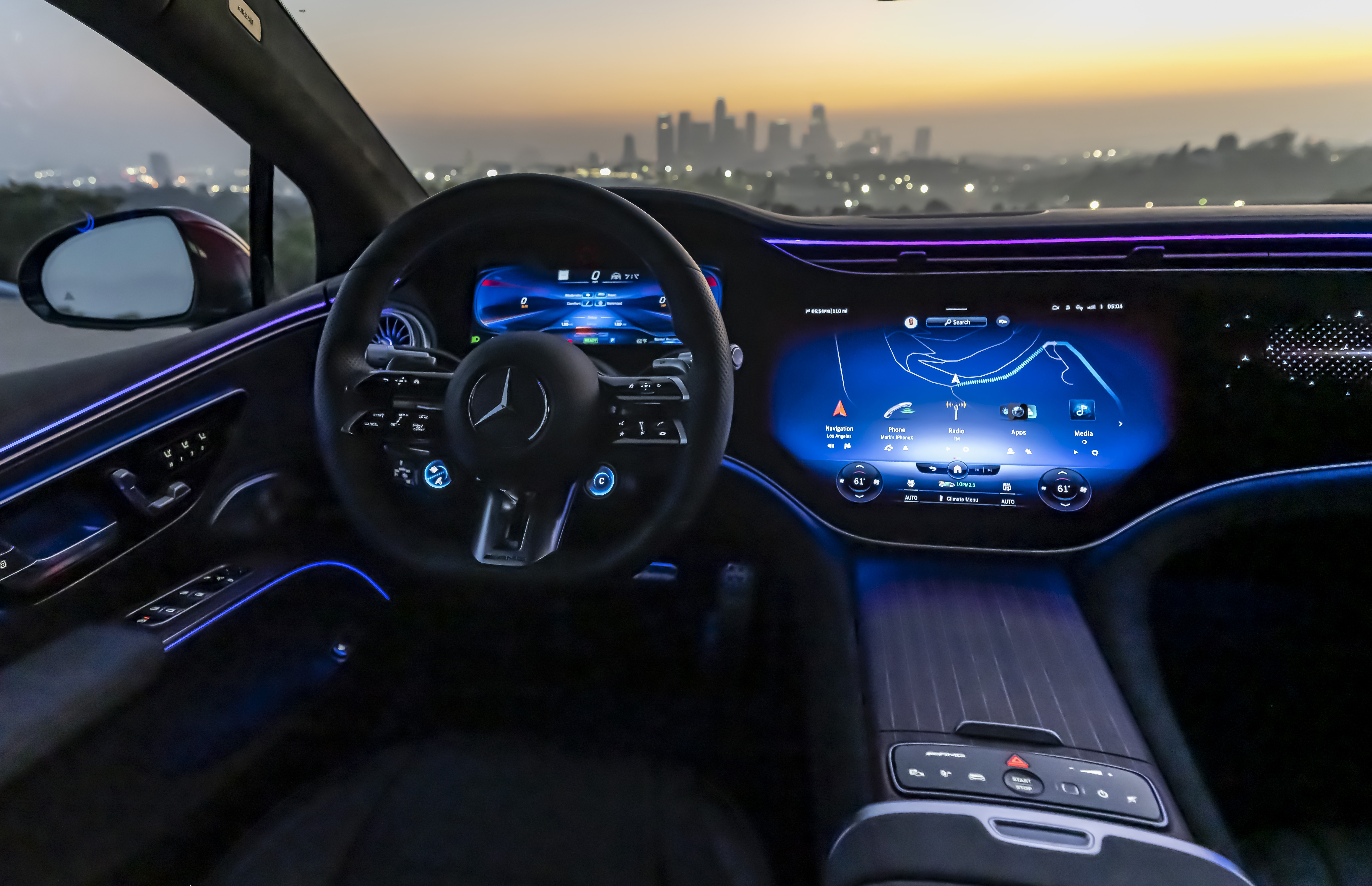 For experienced EV drivers, the EQS has three degrees of regenerative braking – or “recuperation,” as German makers call it. But to get true one-pedal driving, it’s necessary to switch off the idle-creep function within the drive settings.

Like any electric car, one-pedal operation becomes not only addictive but a calmer way to drive. Mercedes says the AMG EQS is capable of up to 300 kW of regenerative braking.

When you need those brakes on a car this fast and large, though, you really need them. It has massive six-piston brake calipers up front, and carbon-ceramic brakes are an option – despite EVs using friction brakes only a fraction of the time.

As well as a variety of design flourishes and interior fittings, the AMG EQS benefits from mechanical upgrades that include new motor windings, additional cooling for the motors, modified inverters and modifications to the powertrain control software.

All suspension mounts and bushings were re-engineered, and the rear-wheel steering that gives the large EQS a remarkably tight turning circle of roughly 18 ft. (5.5 m) was reduced from 10 to 9 degrees. That was likely necessary to accommodate the AMG-specific 21-in. or 22-in. wheels and performance tires. 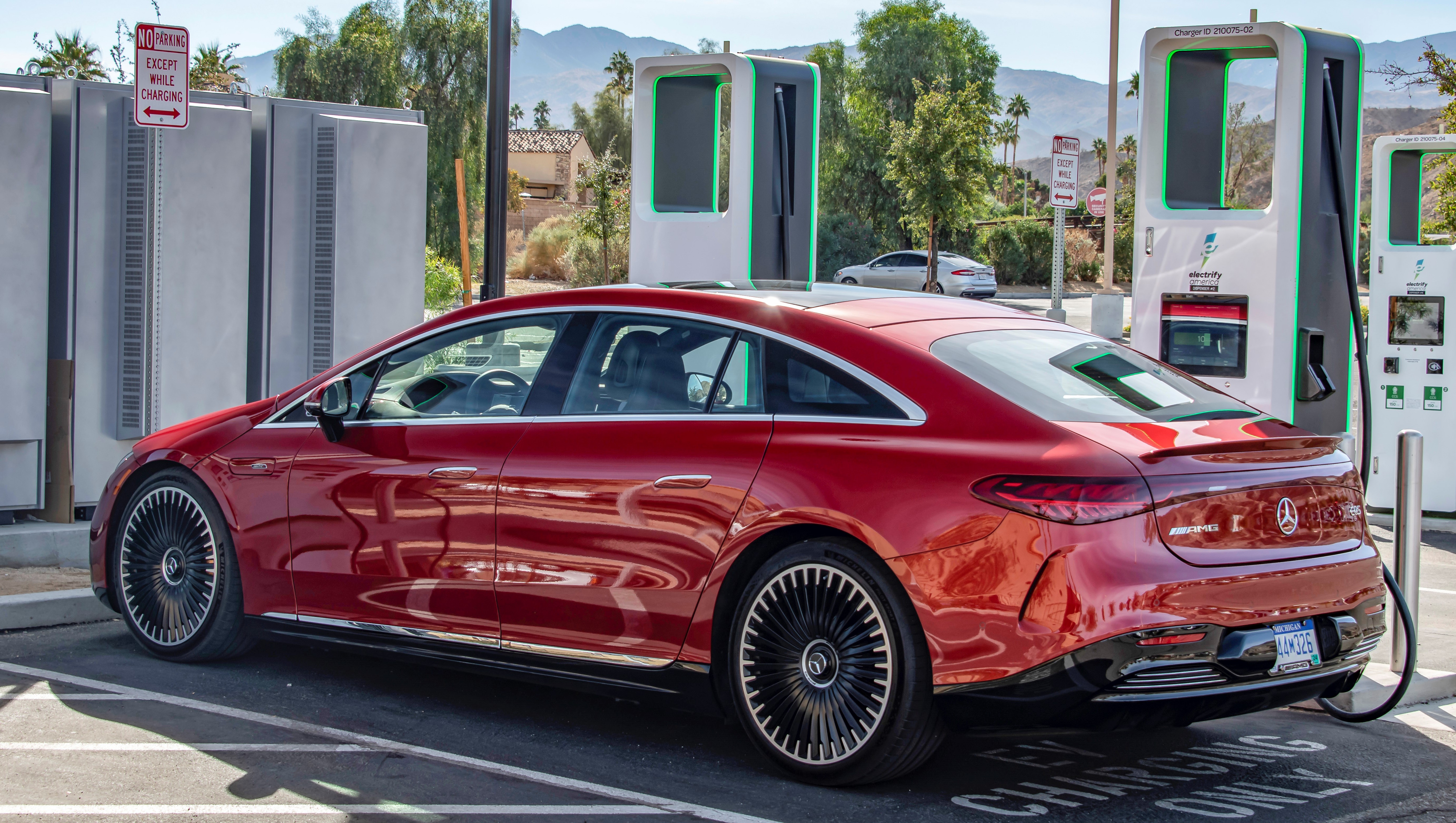 Body modifications include a new front fascia with the characteristic AMG vertical strakes on the “grille” or blanking plate, and a larger rear spoiler. These raise the car’s coefficient of drag to 0.23 from the standard sedan’s remarkably low 0.20.

Sadly, the legendary AMG policy of having a single worker assemble and then sign each AMG engine – known as “One Man, One Engine” – does not extend to electric motors, which are provided by Valeo Siemens.

All EQS versions are assembled in “Factory 56,” the flexible plant within the Sindelfingen complex the company claims is carbon-neutral.

Final equipment, specifications, EPA range ratings and pricing for the 2022 Mercedes-AMG EQS 53 (pictured above, below) will be released closer to the on-sale date, likely within the first quarter of 2022.

The EQS large luxury sedan has been on sale in the U.S. for a few months, but it’s just the first of several electric models on the Mercedes EVA modular platform for large EVs to be released in rapid sequence.

It will be followed in North America by the midsize EQE sedan, then SUV versions of each. Globally, Mercedes has said it will have 10 all-electric EQ models on the road by the end of 2022.