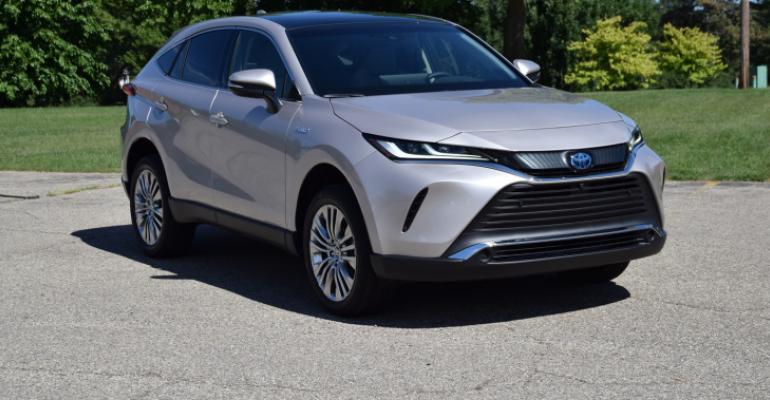 The Venza represents America’s only midsize CUV that comes standard as a hybrid, and it delivers excellent fuel economy, all-wheel drive, appealing sheet metal and a handsome and comfortable interior – not to mention “hovering UFO mode.”

It’s tempting to hear the word “hybrid” and paint a mental image of a dull jellybean of a car that lacks style and substance.

Toyota is doing something about those unfair and often unwarranted assumptions.

Its all-new ’21 Venza hybrid two-row CUV – yes, the nameplate returns after exiting the lineup five years ago – arrives with an upscale interior (pictured below), a handsome exterior and even a rear view that could be mistaken for a more expensive Jaguar F-Pace.

And let’s not forget the Venza’s most important attribute: It’s a hybrid, leveraging 20 years of Toyota gas-electric expertise and reaching an eye-opening 41.5 mpg (5.6 L/100 km) during our test drive in metro Detroit. We never observed fuel economy below 36 mpg (6.5 L/100 km).

But first, some context. The Venza arrives in the Middle CUV segment as tracked by Wards Intelligence – far and away the most popular vehicle sector in America today.

It’s quite possible that Middle CUV, by itself, will outpace all sedans and coupes – luxury and mainstream – before long.

Our Middle CUV segment includes 24 vehicles, and most of the sales are conventionally gas-powered. But the segment also includes hybrid versions of the Ford Escape, Honda CR-V, Hyundai Santa Fe, Kia Sorento, Toyota RAV4 and Toyota Highlander. Nissan’s launching an all-new ’21 Rogue now, but there is no hybrid in the announced product plan.

Toyota sells more hybrids than anyone, so it makes sense for the Japanese automaker to dust off the Venza nameplate as a five-passenger gas-electric option for customers who want something smaller than Highlander but more carlike than RAV4. 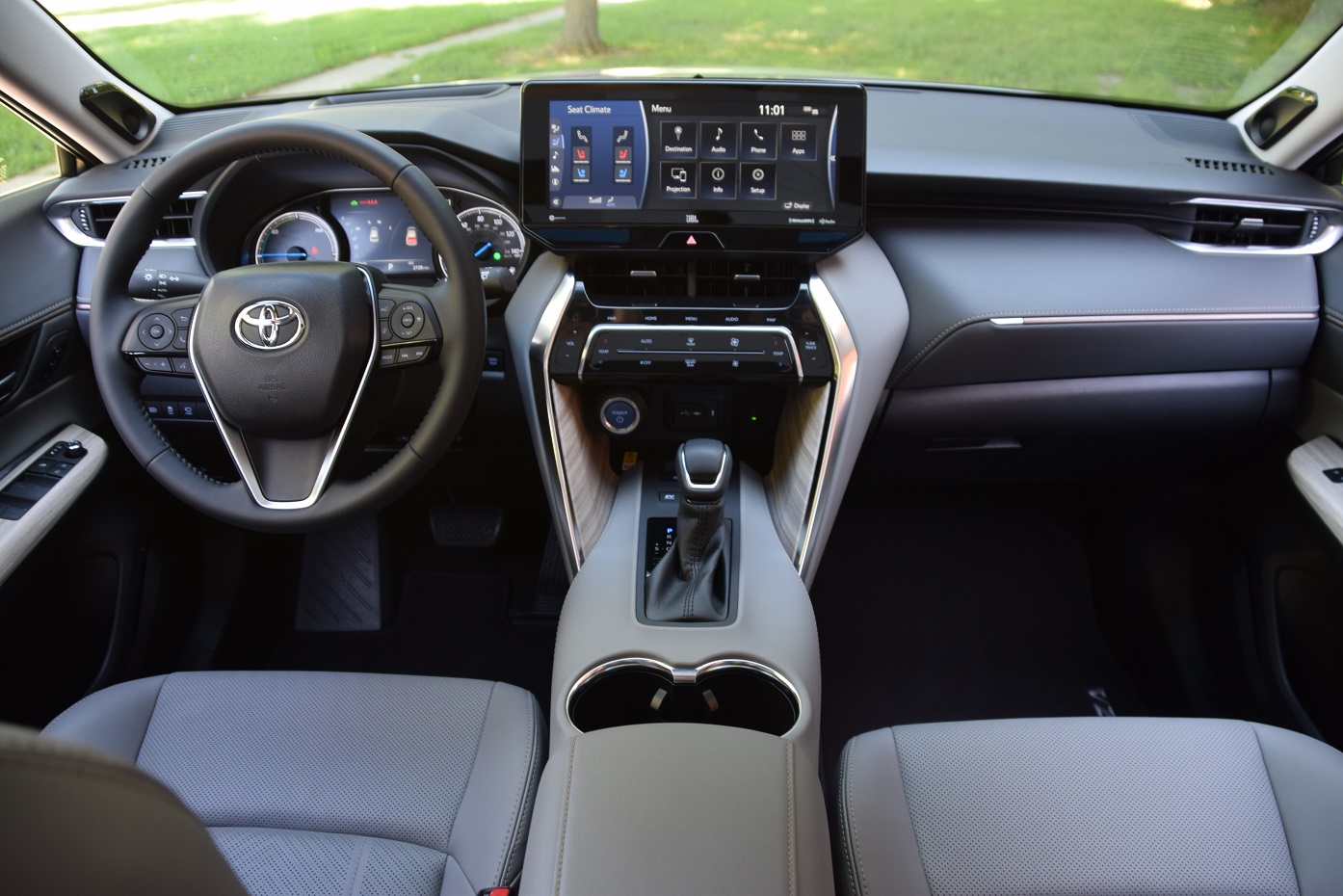 The Venza and RAV4 both ride on the Toyota New Global Architecture and have the identical wheelbase and width, but the Venza is lower to the ground and is longer overall by about 6 ins. (152 mm).

But here’s the kicker – and an important differentiator: The Venza will be the sole midsize CUV that comes only as a hybrid. The rest of them, including the Highlander and RAV4, are available with conventional non-hybrid gasoline powertrains, along with their hybrid variants. 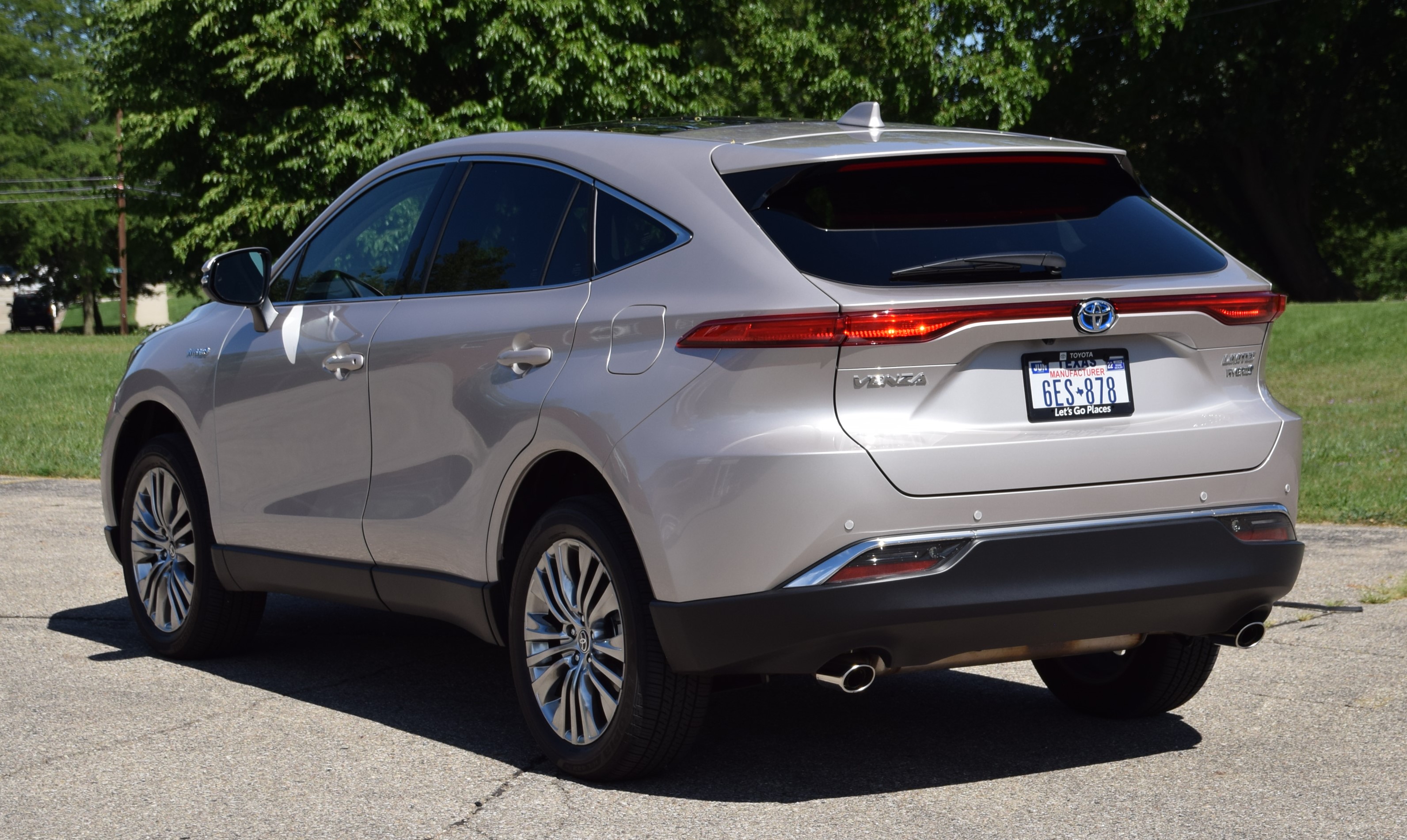 Three electric motors (including one at the rear for standard on-demand electronic all-wheel drive, similar to the Prius AWD system) get juice from a 252V lithium-ion battery pack placed beneath the rear seats. Combined system output is 219 hp.

Torque reaches the wheels through an electronically controlled CVT with sequential shifting, and combined fuel economy is estimated at 39 mpg (6.0 L/100 km).

In our test drive, we bopped around town and saw great fuel economy, as mentioned, but we were limited in our all-electric speed to about 20 mph (32 km/h). In other Toyota hybrids, such as the Lexus UX, we routinely saw 40 mph (64 km/h) before the gasoline engine kicked on. 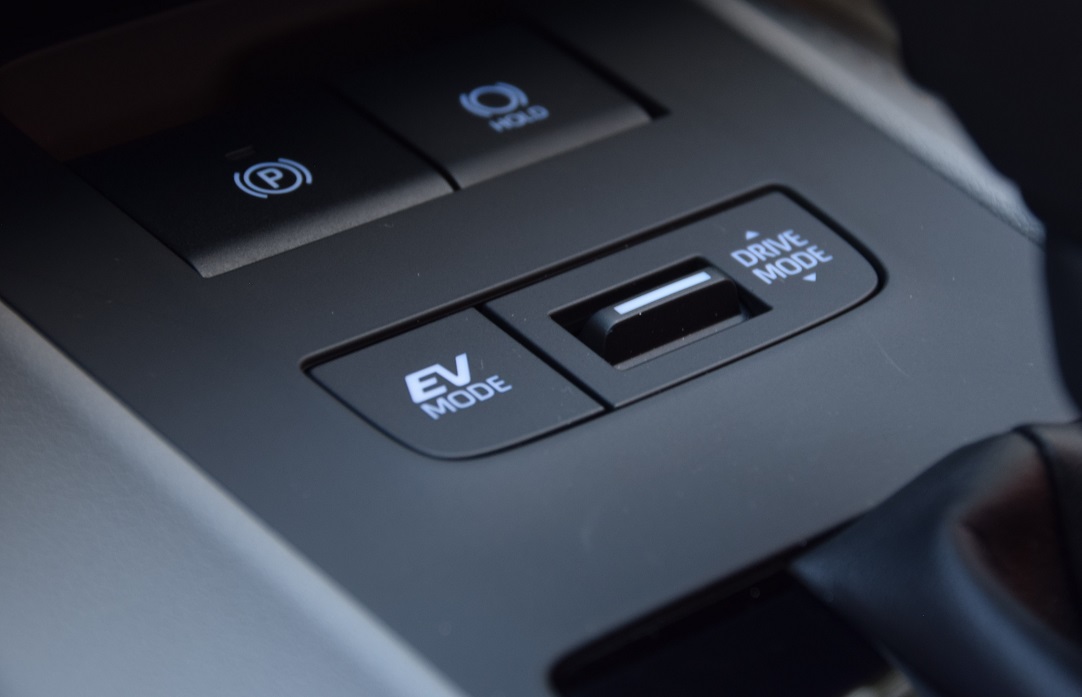 The engine is louder than we would like when it does turn on, reminiscent of Toyota hybrids of the past. But the overall operating sounds of the drivetrain are acceptable, and the system is very responsive to throttle inputs, moving the 3,913-lb. (1,775-kg in Limited trim) CUV quite capably.

We really like the spacey sound that’s projected from the car to warn pedestrians when running in all-electric mode and when backing up – best described as “hovering UFO mode.”

The stylish interior definitely will help seal the deal with many shoppers.

Toyota has been executing outstanding interiors for three years now. The Toyota brand’s highest-volume vehicles have earned Wards 10 Best Interiors honors since the redesigned Camry won in 2018, followed by the RAV4 in 2019 and the Highlander this year.

The Venza’s cabin falls in line with these recent honorees, with a soothing two-tone gray color scheme, perforated leather and a clean, uncluttered center stack populated with sleek, capacitive touch controls rather than hard buttons.

The focal point of the Venza’s interior is the storage cubby below the center stack and ahead of the gear shifter. It’s designed to look like a tunnel in which the end cannot be seen.

The walls of this tunnel (pictured above) are covered with light birch-colored faux-wood film with horizontal grain that extends forward into the abyss. The front edges are covered with brushed metallic trim rails that seem to support the 12.3-in. (31-cm) center display screen in our Limited test model. Smaller screens are available in lower trim levels.

Also striking is the bronze-colored piping that sweeps across the instrument panel and door trim. At first glance, it appears to be a painted surface. But look closely and you see threads, like the piping on premium furniture.

There is no volume knob, which may annoy some, as Honda has learned. Infotainment menus are generally intuitive but require practice – they will be familiar to Toyota shoppers. 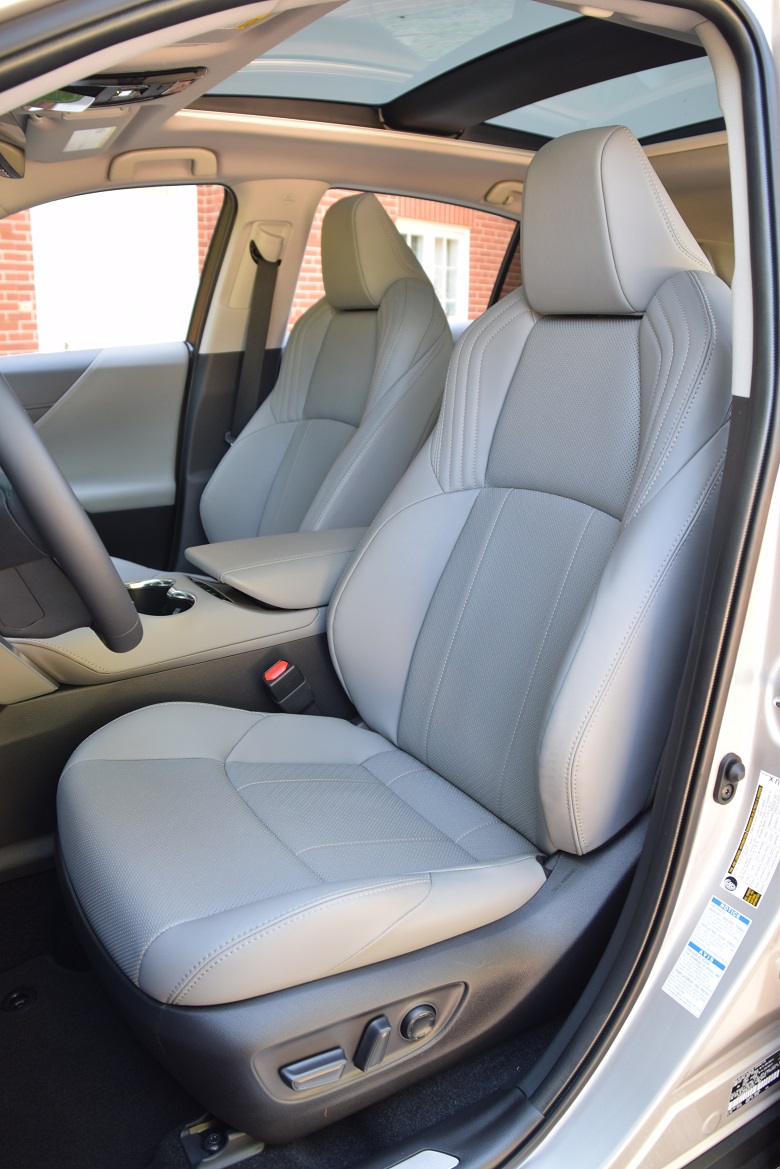 Overall we have few complaints about the interior or the user experience: Controls for the heated and cooled seats are a tad close to beverages perched in the center cupholders, but second-row seats are roomy, USB ports are plentiful, voice controls work well and front seats are very comfortable and feature distinctive stitching along the shoulder bolsters (pictured, left) for a splash of sophistication.

The fixed panoramic roof, marketed as Star Gaze, is an electronic sunshade that can be turned on and off to limit glare and the amount of sunlight.

The Venza is fresh out of the product chute – being assembled at the Takaoka Plant in Japan – and sales have reached 5,178 units through October.

That’s barely a blip in a fiercely competitive segment, but bank on the Venza to be in the hunt for customers among hybrid midsize CUVs next year. 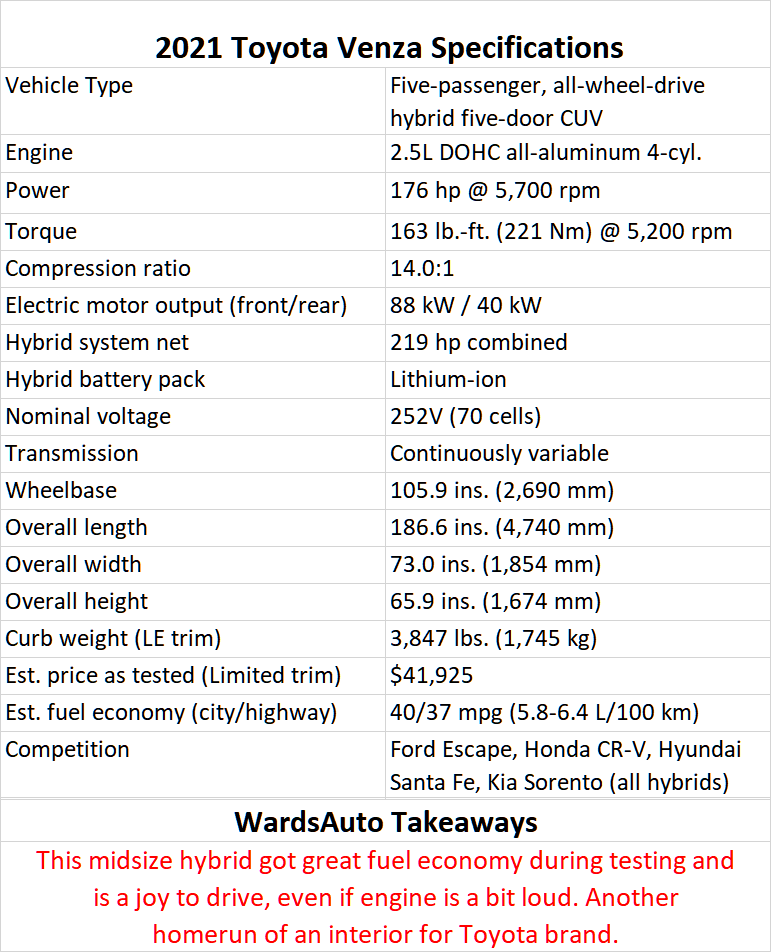