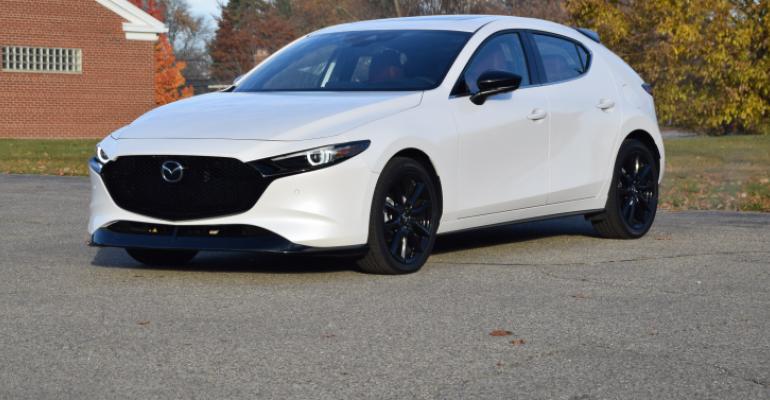 2021 Mazda3 No Hot Hatch But Spools Up Loads of Fun

The smooth, refined 2.5L turbo-4 from the larger CX-9 is well suited for the Mazda3, especially with AWD. Spend a couple days behind the wheel, and it becomes apparent why Mazda product planners think of the Audi A3 and Acura ILX as competitors.

With or without a pandemic, the market for small cars has been challenging, to say the least.

Through the first three quarters of 2020, sales in the Upper Small car segment as tracked by Wards Intelligence were down 34.7% from the same period in 2019.

Among the dozen nameplates in this sector, such as the No.1 Honda Civic and No.2 Toyota Corolla, not a single model is posting sales growth this year. The Kia Forte is doing the best, down only 14%. The trendline (pictured below) illustrates exactly why the Chevrolet Cruze, Dodge Dart and Ford Focus were discontinued.

Mazda isn’t willing to give up on this segment. Even though its Mazda3 compact has developed a solid fan base since arriving in 2003, it’s never been in the hunt for segment leadership.

But a whittled number of rivals means bigger slices of the pie for those remaining, and Mazda has incorporated meaningful upgrades to the ’21 Mazda3 arriving in showrooms now as a midcycle refresh of the all-new Mazda3 that launched two years ago.

Most important is a high-output turbocharged engine that Mazda fans have been clamoring for since the Mazdaspeed3, which was in the market from 2007 to 2013.

For the ’21 Mazda3, the engineering team adapted and tweaked the excellent 2.5L Skyactiv-G turbocharged 4-cyl. from the much larger CX-9 three-row CUV and shoehorned it into the much smaller engine bay of the Mazda3 (available in standard and Premium Plus trim).

We’ve told you a lot about this engine, particularly when it won a 2017 Wards 10 Best Engines trophy for its use in the CX-9.

The specs carry over, from the 10.5:1 compression ratio and 250-hp rating (227 hp with regular fuel) to the elaborate 4-3-1 exhaust manifold routing that helps the engine breathe and the sophisticated flapper valve that varies the amount of air spooling up the turbo, both for improving throttle response and boosting efficiency.

It’s tempting to consider the ’21 Mazda3 2.5 Turbo the spiritual successor to the Mazdaspeed3, but it’s really not.

The Mazdaspeed3 was a hot hatch rivaling the Ford Focus ST and Volkswagen GTI. It was front-wheel-drive, which meant torque steer when pressing the 263-hp 2.3L turbo-4. It was a tad jittery, which kept youthful enthusiasts engaged and excited. 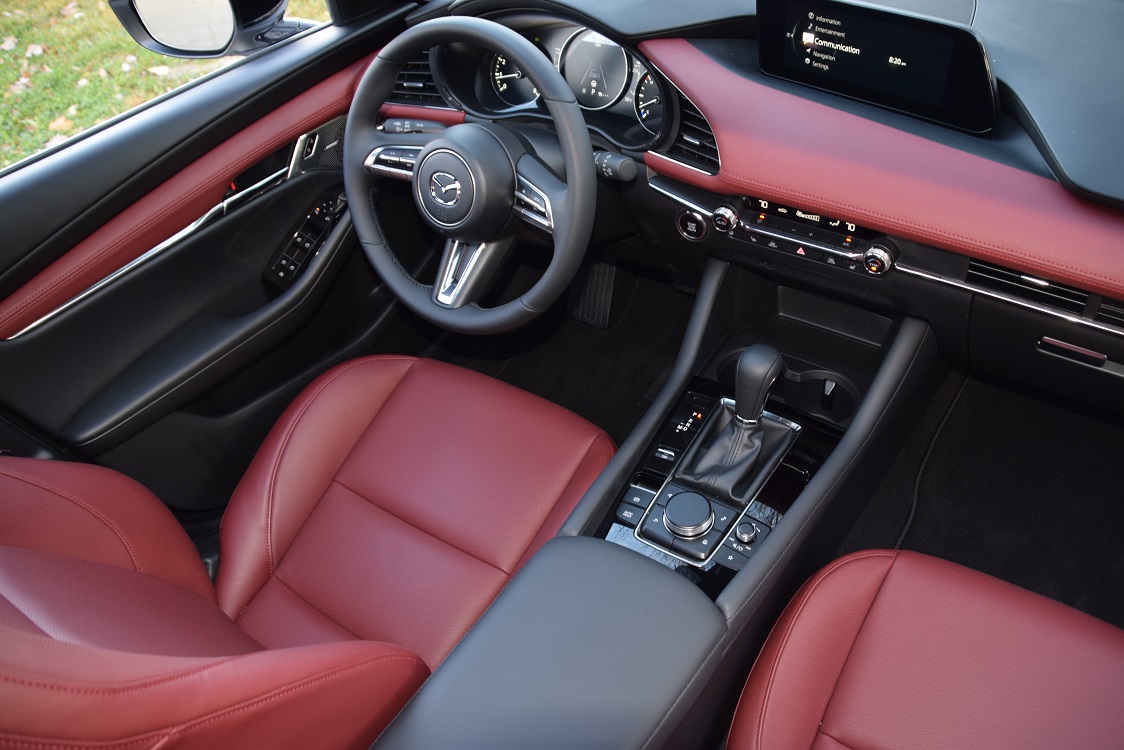 Today’s 2.5 Turbo is being marketed as a grownup version of the Mazdaspeed3 because tweaks to the chassis and suspension make the new car a much more accommodating daily driver that still can be a lot of fun on a weekend jaunt through the hills.

Most important is the standard all-wheel drive hitched to the 6-speed automatic transmission, enhanced by G-Vectoring Control to improve lateral control.

Spend a couple days behind the wheel, and it becomes apparent why Mazda product planners think of the Audi A3 and Acura ILX as competitors.

The new Mazda3 Turbo feels like an aspiring luxury car with a smooth, refined engine that maintains its composure, always willing to push the tach needle near the 6,300-rpm redline. 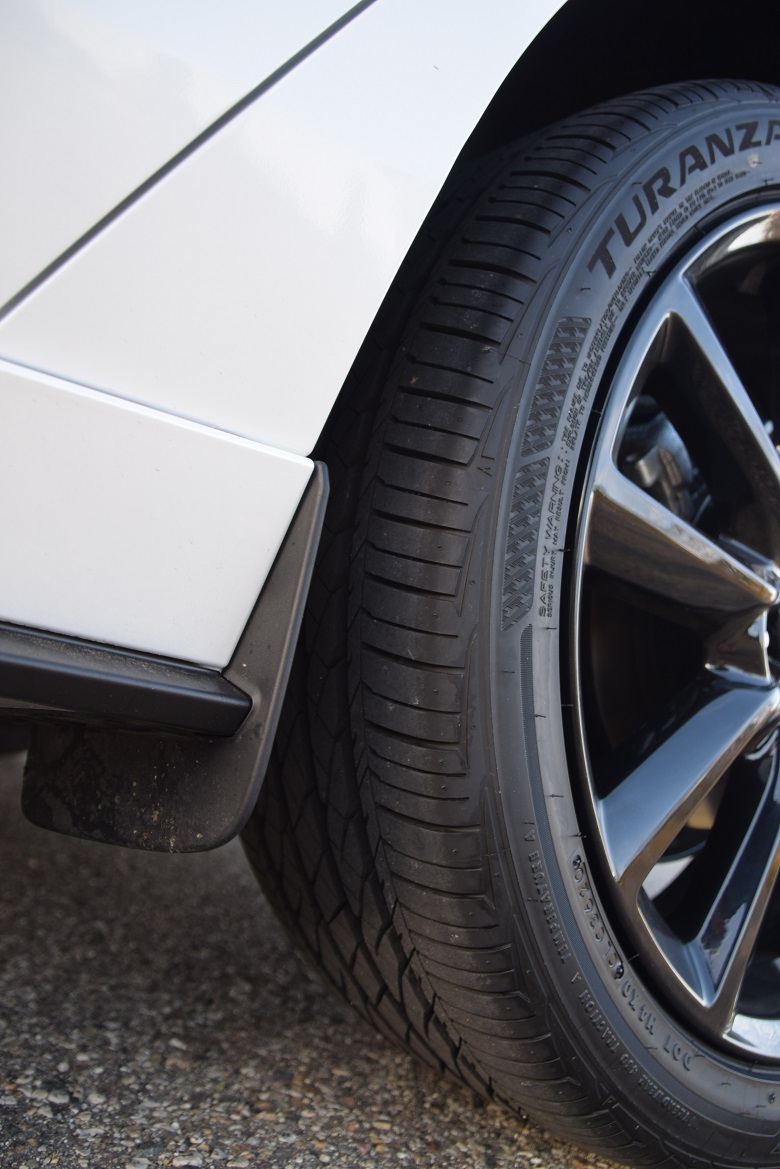 Bridgestone tires (pictured, left) are grippy in those instances, and the suspension is ideally tuned to be firm but appropriately compliant for, Mazda says, grownup drivers. With AWD, the overall ride and handling is much better than what I recall from the Mazdaspeed3.

The goal was to achieve the feel, refinement and performance of a naturally aspirated 6-cyl., and the new Mazda3 2.5 Turbo certainly succeeds.

Mazda is not a luxury brand, but it, along with Subaru, occupies the unique space of near-luxury, trying to stay a step above mainstream brands.

The all-new Mazda3 2.5 Turbo is a breath of fresh air – compressed and spooled – in the Upper Small car segment. 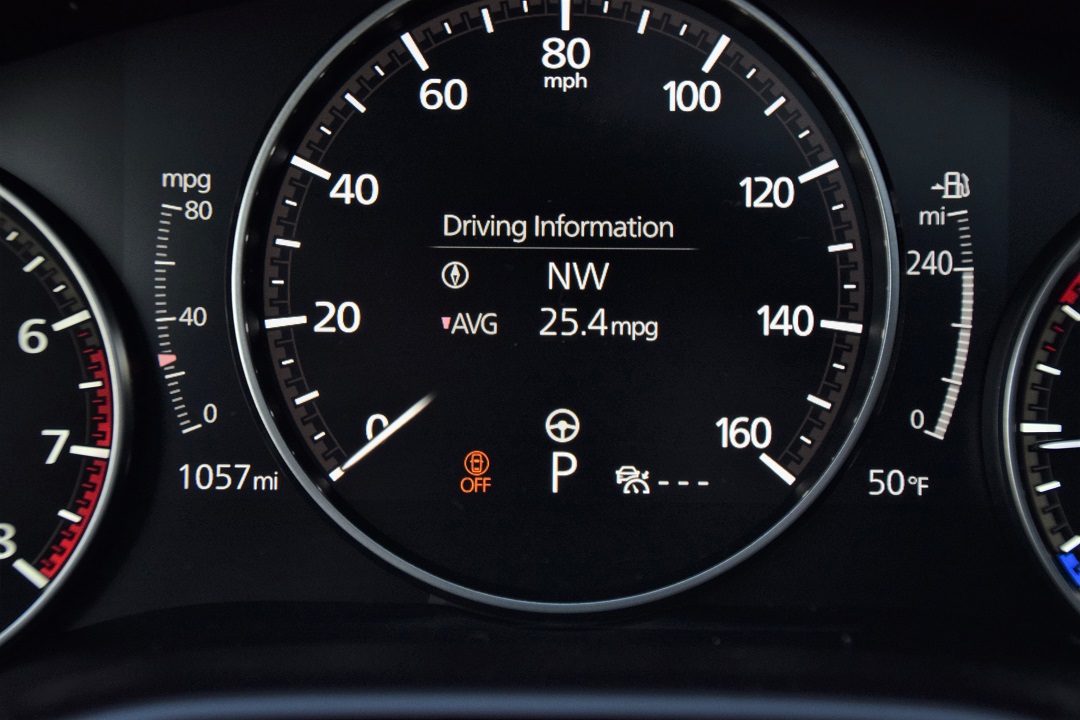