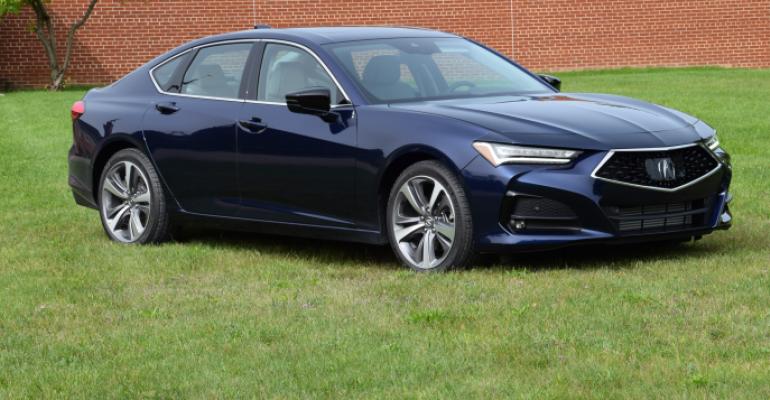 Luxury sport sedans should be with us for years to come, and the Acura TLX furthers the case for such cars with good looks, a fetching interior and a capable 2.0L turbo-4. In the spring, a high-output turbocharged V-6 raises the ante in the Type S variant.

While no one was looking, Acura has gone from also-ran status among big-name luxury brands not long ago to a formidable contender in three extremely challenging segments.

Through the first three quarters of this year, the Acura MDX – at the end of its lifecycle – was the top seller among Large Luxury CUVs as tracked by Wards Intelligence, outpacing the Audi Q7, BMW X7, Infiniti Q60, Mercedes-Benz GLS and Volvo XC90.

Up against Large Luxury SUVs such as Lincoln Navigator, Cadillac Escalade and Range Rover, the MDX had an even wider lead.

In the hyper-competitive Midsize Luxury CUV segment, including nearly 30 vehicles, the Acura RDX is fighting for the No.2 slot, behind only the Lexus RX, shockingly outselling every BMW and Mercedes-Benz in the sector.

Among Lower Luxury Cars (a segment with more than 20 upscale sedans), the current-generation Acura TLX is holding its own, trailing only the BMW 3-Series, Lexus ES, Mercedes C-Class and Tesla Model S. At the end of its lifecycle, the outgoing TLX is outrunning the Alfa Romeo Giulia, Audi A4, Cadillac CT5, Infiniti Q50, Lexus IS, Nissan Maxima and Volvo S60 – not bad at all.

And there’s no reason to curb the enthusiasm: An all-new MDX is on the way and, more immediately, the fully re-engineered TLX sedan now is rolling into U.S. showrooms from parent company Honda’s assembly plant in Marysville, OH.

The new TLX is longer, wider and lower than the previous generation and yet smaller than the now-departed fullsize RLX sedan, making the new flagship car a perfect “tweener” to rival both the BMW 3-Series and 5-Series, for instance. 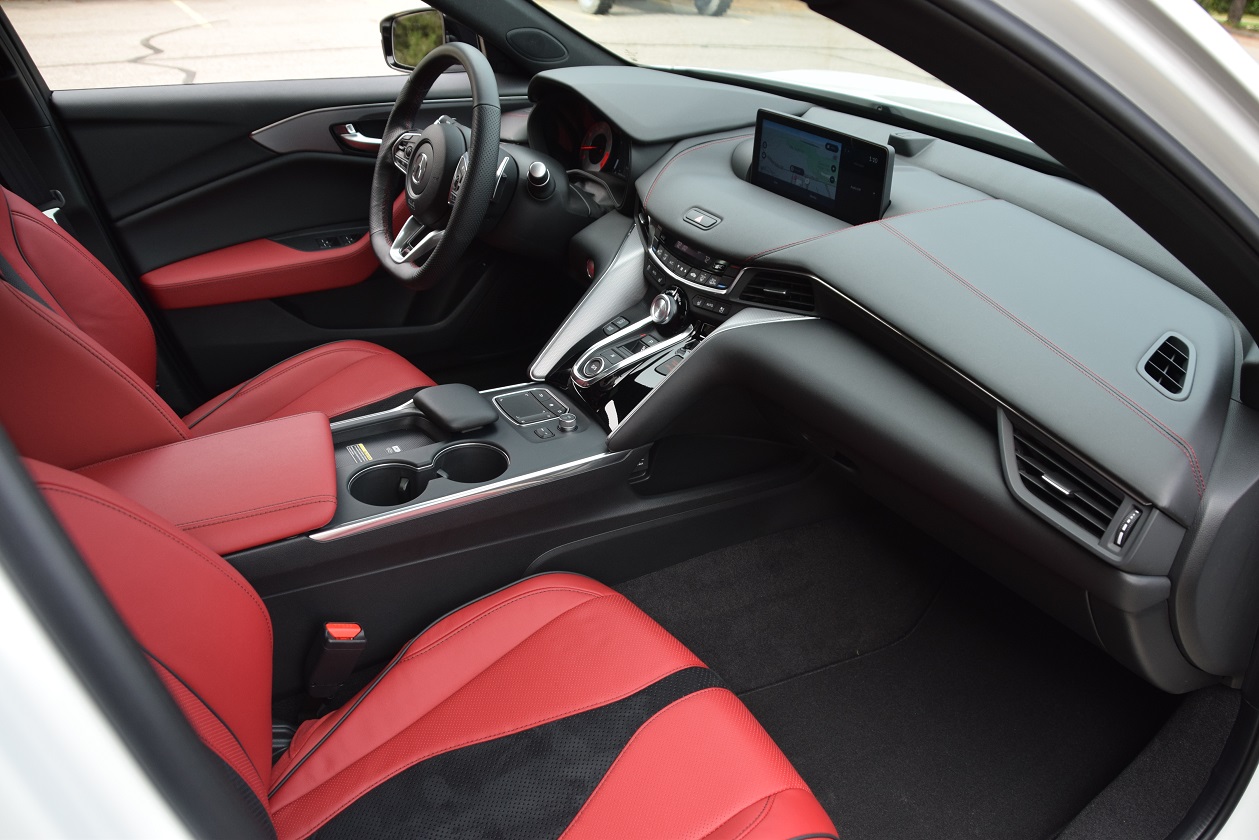 The ’21 TLX springs from an all-new Acura-exclusive body and chassis architecture that marks the return of the double-wishbone front suspension, integrated within a front rigid aluminum subframe. At the rear is a 5-link setup, with a rear steel subframe.

Gone is the naturally aspirated 2.4L 4-cyl., and product planners consider the new turbo-4 to be a significant upgrade for the base TLX engine.

The 2.0L turbo is wholly capable and probably will satisfy most shoppers. But the entry grade’s curb weight of 3,702 lbs. (1,679 kg) for front-wheel-drive models – along with expanded dimensions – make the TLX heavier than similarly equipped rivals from BMW, Mercedes-Benz, Audi, Cadillac and Infiniti.

With Super-Handling All-Wheel Drive, the new TLX is 155 lbs. (70 kg) heavier than last year’s model equipped with the larger V-6. That extra mass is noticeable when pressing the 2.0L turbo into service as it sounds strained when getting up to speed. Throttle response is not immediate. 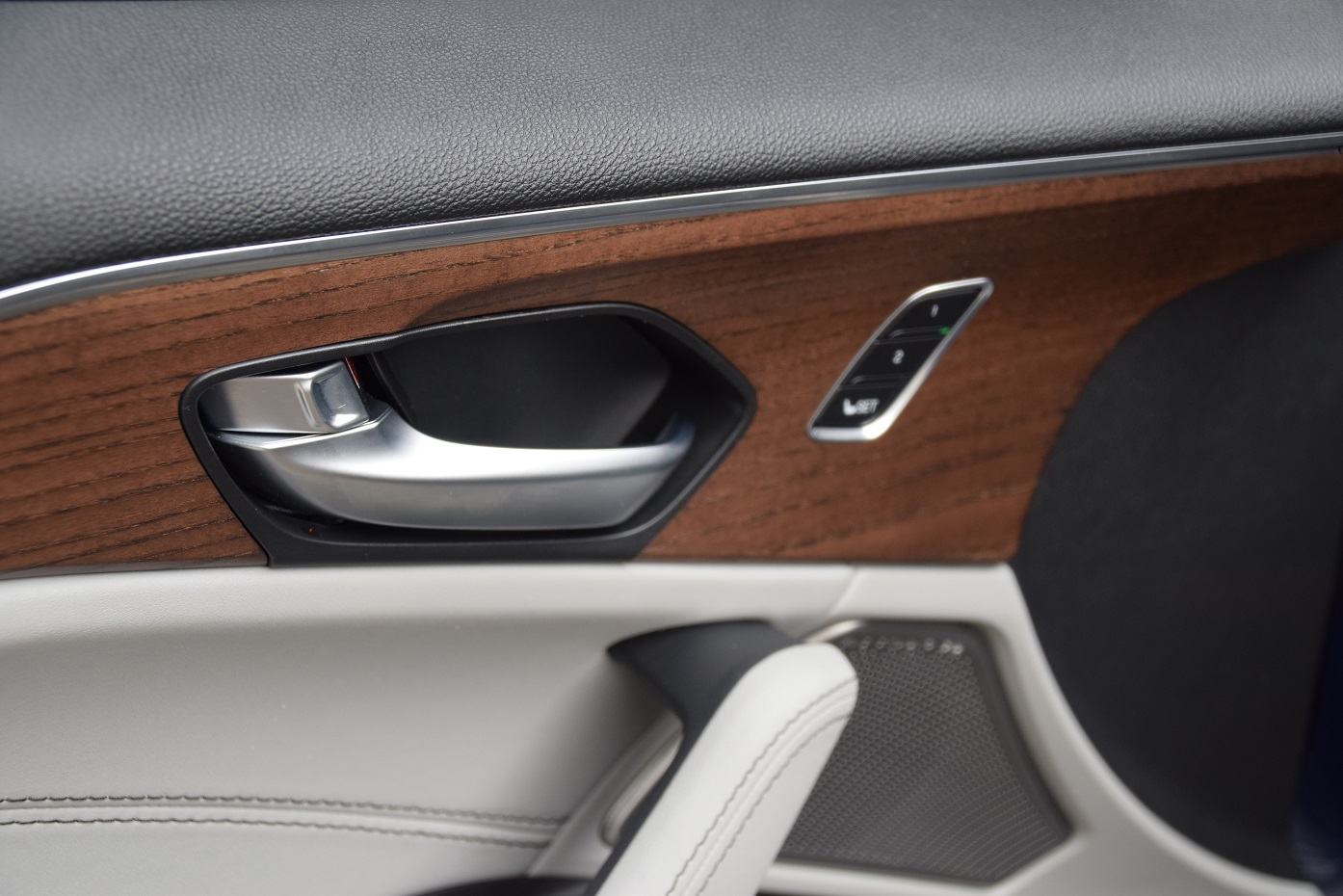 SH-AWD is now in its fourth generation and has been upgraded with torque vectoring to help with lateral stability, as well as 40% more rear torque capacity.

If intenders want more powertrain oomph from the new TLX, it’s just around the corner: In the spring, a TLX Type S performance variant arrives with an all-new Acura-exclusive 3.0L turbocharged V-6 promising at least 355 hp, with standard SH-AWD.

A 10-speed automatic transmission is hitched to both the 2.0L turbo and upcoming 3.0L turbo V-6, replacing the 8-speed and 9-speed transmissions employed previously.

Acura’s Jonathon Rivers says it’s reasonable to bank on the Type S accounting for 20% of TLX sales, and it likely will carry a base price in the low-$50,000 range. 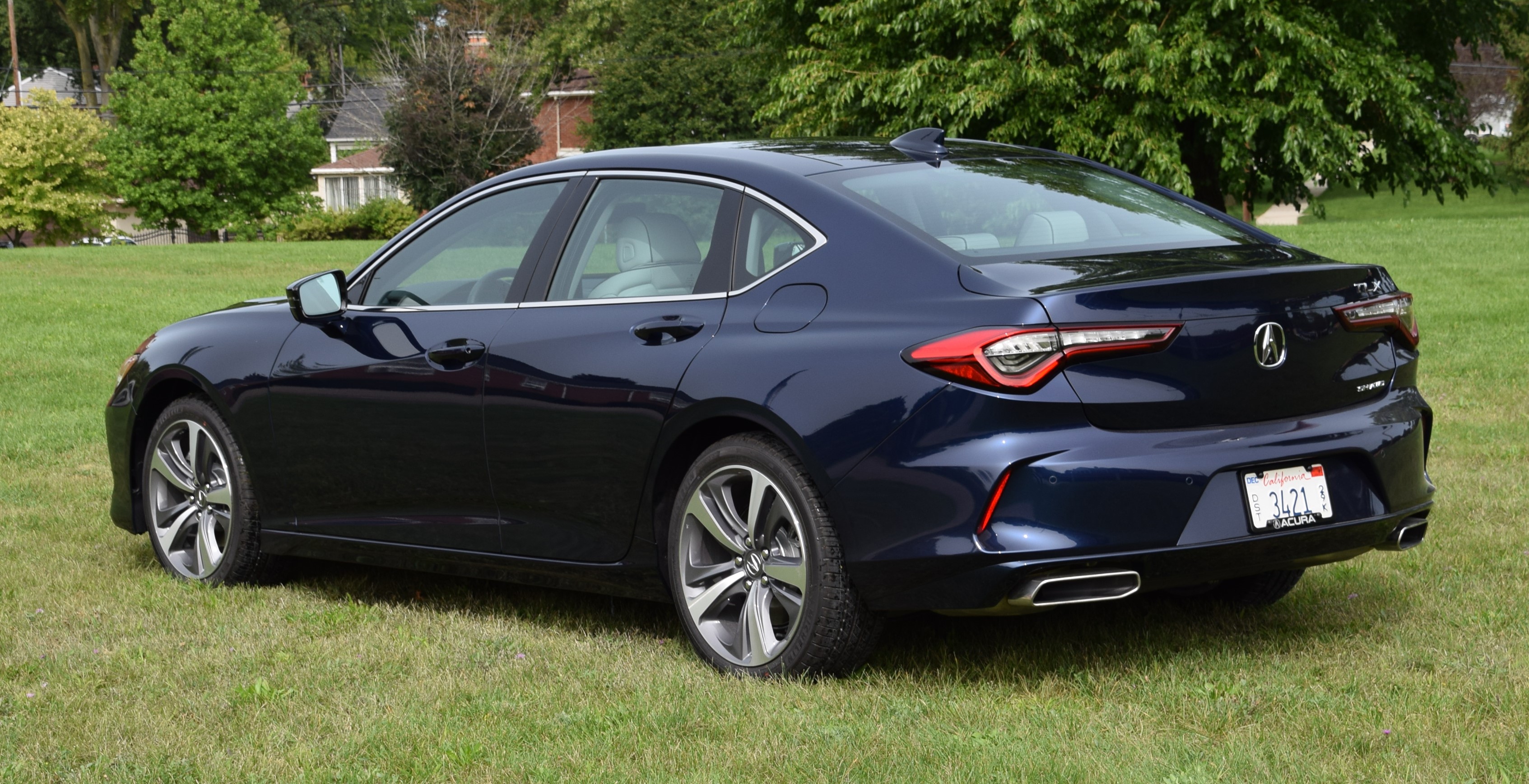 But shoppers curious about the TLX shouldn’t wait for next year’s Type S to visit their neighborhood dealer for a test drive.

Besides its fetching good looks outside, the interior is well-crafted with form-fitting seats, Milano leather, authentic wood and aluminum trim, an outstanding ELS Studio premium audio system and an available bold red-on-black color scheme in the sporty A-Spec tester we experience.

Fit-and-finish is impeccable, as we’ve come to expect from Acuras, and the infotainment system is first-rate, integrating updates to the highly intuitive True TouchPad Interface, which helped the Acura RDX win a Wards 10 Best UX trophy two years ago. 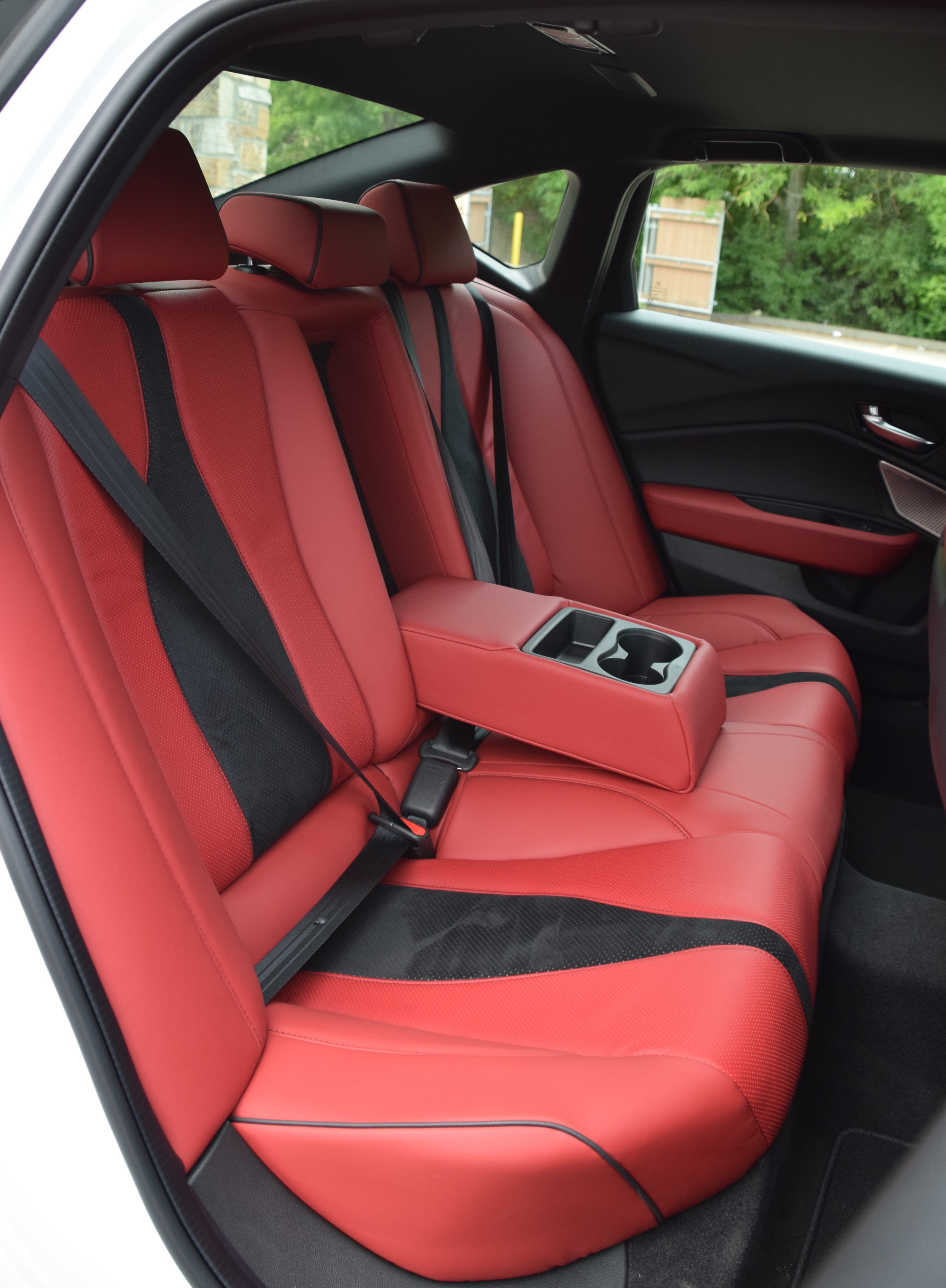 One complaint about the interior: Despite its larger footprint overall, the second row of the TLX does not feel all that spacious. For instance, there isn’t much headroom (pictured, left) in any of the three rear seating positions for this modestly sized male.

Pricing is competitive. A top-of-the-range TLX with the Advance package and SH-AWD stickers at $49,325, including the $1,025 destination charge. The A-Spec tester with the hot red interior is even less – $47,275.

Sure, people like CUVs and SUVs, pushing the U.S. market to a 70% truck mix. In launching the all-new TLX, Acura’s Jon Ikeda sees money on the table: “Thirty percent is still thirty percent,” he says.

Indeed, the competition has not been standing still with sedans: An all-new Lexus IS is launching now, and the Cadillac CT5 and Mercedes C-Class were redesigned last year. The current BMW 3-Series has been in the market for two years.

Thanks to their style, lighter weight, aerodynamics and handling, the luxury sport sedan has a lot to offer and should be with us for years to come. The Acura TLX does plenty to further their cause. 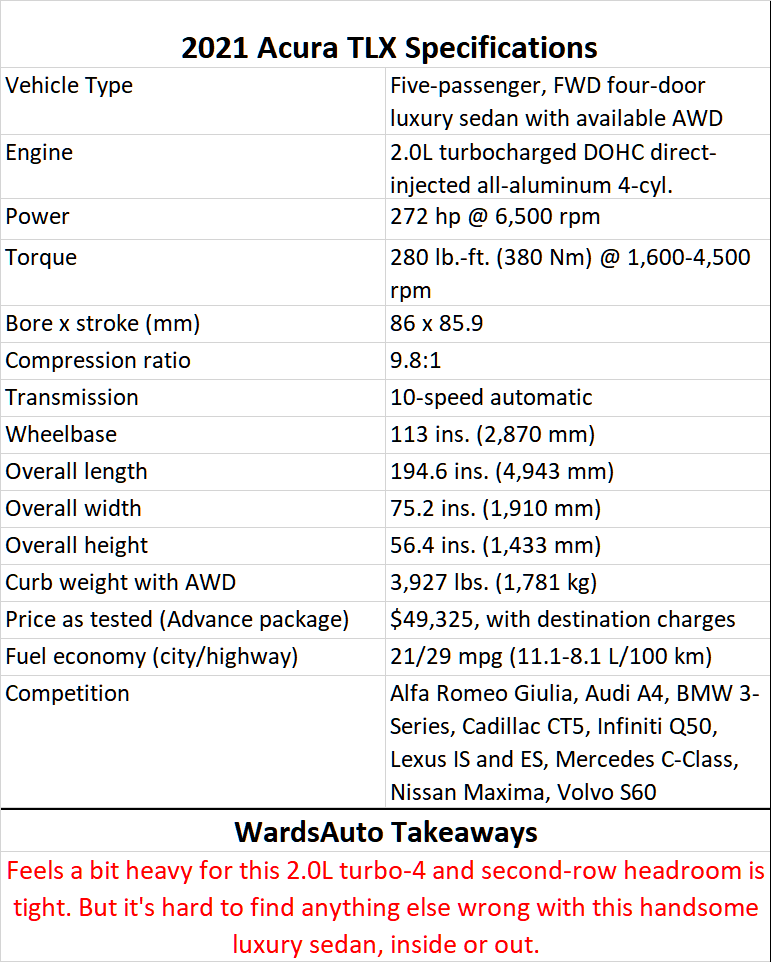