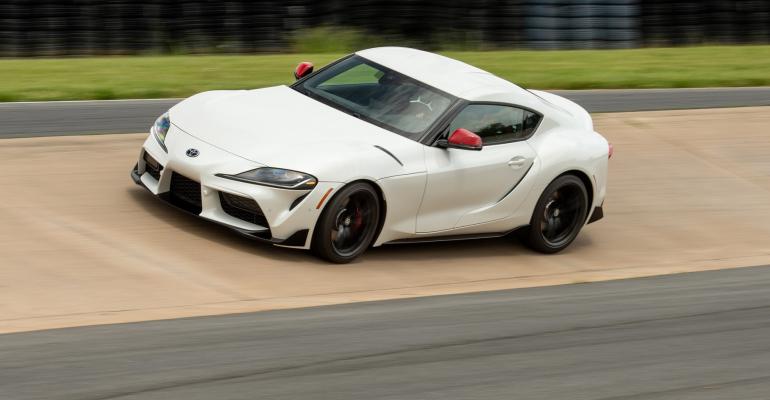 Toyota built its Porsche Cayman-fighter for the track.
Test Drives

Packing a strong and smooth BMW-built, 335-hp inline 6-cyl. and a chassis and aerodynamically tuned body built for speed, the ’20 Toyota Supra is an enthusiast’s dream come true.

Yes, the cars share the same footprint and powertrain, but that’s where the engineers veered off in different directions, with Munich developing an open-air roadster patterned after the Porsche Boxster while Toyota City set its sights on building a coupe capable of challenging the likes of the hardtop Cayman.

The result is a Supra for the 21st century, a sports coupe capable of going toe-to-toe with the best in the business while living up to the nameplate’s legacy of attainable and affordable performance. The car is lightning quick (with a thunderous exhaust note) while imbuing the driver with exceptional confidence in its tractability.

Supra’s tradition of inline 6-cyl. power fueled the decision to collaborate with Bavaria on the brand’s halo sports car – and the first new Supra in 21 years. Rather than swallowing the cost on its own to develop an engine from the ground up for a niche model, the automaker struck a deal to use BMW’s inline 6-cyl., an engine it considers to be the best in the business.

Chief engineer Tetsuya Tada, who previously collaborated with Subaru to develop the Subaru BRZ/Toyota 86, recalls he was part of the team presenting the 86 to media in Barcelona, Spain, in May 2012 when he was ordered to hop a flight to Germany to meet with BMW on the possibility of a Supra/Z4 project.

Tada says those discussions led to an agreement in 2013 to develop the basic bones of the car, including its 6-cyl. longitudinal, front-engine, rear-drive layout as well as its chassis hard points such as wheelbase and track.

Around the same time, Kevin Hunter and his team at CALTY Design in California were sketching what would eventually premiere as the FT-1 concept at the 2014 North American International Auto Show in Detroit.

“From the beginning, it was designed to be the next Supra,” says Hunter, of the functional, “shaped by the wind” design for the high-performance halo sports car.

Two years of development work between Toyota and BMW established the foundation, and once that was in place, the engineering teams parted ways and spent the next several years putting together two distinctly different versions of a 2-seat sports car. Tada says the teams shared little as Toyota pursued its plans for a track-focused performer while BMW engineers developed a roadworthy open-air driver.

The soft-top ’19 BMW Z4 sDrive30i hit the market in February, followed this month by the first 1,500 Supra Launch Edition coupes in red, white or black. Both the BMW and Toyota are assembled by Magna Steyr in Graz, Austria.

On our drives on public roads, the engine purrs and combines smoothly with the 8-speed ZF automatic transmission to provide steady motoring or serious passing speed, all with a quick blip of the throttle.

But the Supra truly shines on the track at Summit Point Raceway here, ripping off lap after lap of heart-pounding excitement, attacking straightaways with high-revving acceleration while the big 4-piston, 13.7-in. (348-mm) Brembo brakes peel off speed in a hurry, just in time to tackle another tight corner.

Whether on track or road, the car’s wide stance (Toyota says it’s the shortest-wheelbase, widest-track production sports car on the market) and 50-50 weight distribution make it feel perfectly planted – it seems truly hard to unsettle the chassis with power, braking or steering. Rather, the Supra soaks up inputs, steadies itself and gives the driver just enough elasticity to truly enjoy the spirited driving it seems built to encourage.

Aiding the driver are huge aerodynamic body features and a GKN-sourced active differential that employs a single clutch pack to distribute torque across the rear axle, depending on grip, to help power the Supra around corners. Adaptive variable suspension (with two settings, Normal and Sport) and a suite of stability and traction control electronics also play a part, but only a minimal amount of intervention is evident in our track drives.

Inside, the Supra clearly shares lineage with its BMW counterpart, but that’s not a bad thing. Controls are conveniently placed, while the pistol-grip shifter and steering-wheel paddle shifters provide easy access to the Toyota’s gearbox.

Following the fully equipped U.S.-only Supra Launch Editions, the car arrives in two trim levels: The Supra 3.0 with a 6.5-in. (16.5-cm) center display and Alcantara seats, while the Supra 3.0 Premium grade boasts an 8.8-in. (22.4-cm) navigation touchscreen, 12-speaker JBL audio with wireless Apple CarPlay, wireless phone charging, color head-up display and leather seats. Navigation and JBL audio are a $2,460 option on the 3.0 model.

Tada says he’s pleased with the results of his engineering work on what may be the last gasoline-only sports car in Toyota history as automakers embrace electrification to meet global emissions and fuel-economy targets. Unlike Toyota’s usual pace, the Supra’s long development time came with no deadline pressures or fuel-efficiency requirements, Tada says.

“This is my last gift to my worldwide fans,” Tada says, smiling. “I hope there are 20 years of enjoyment in it.” 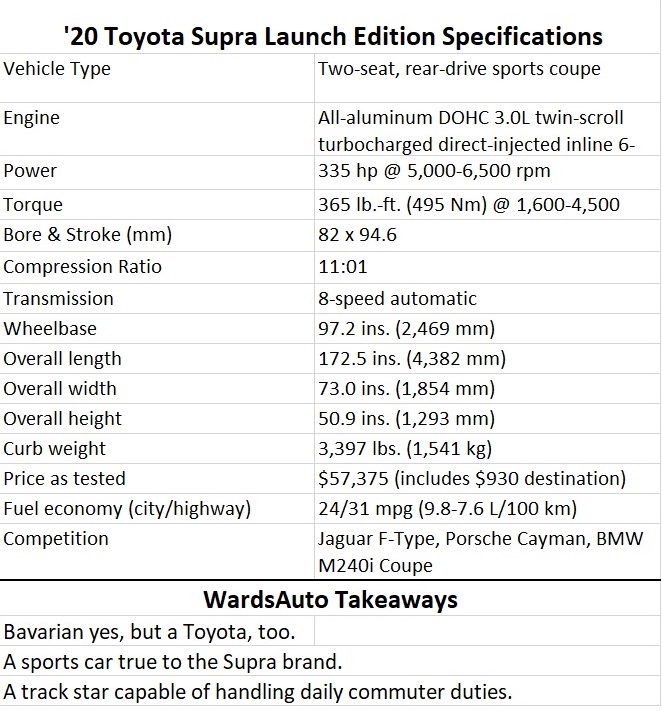