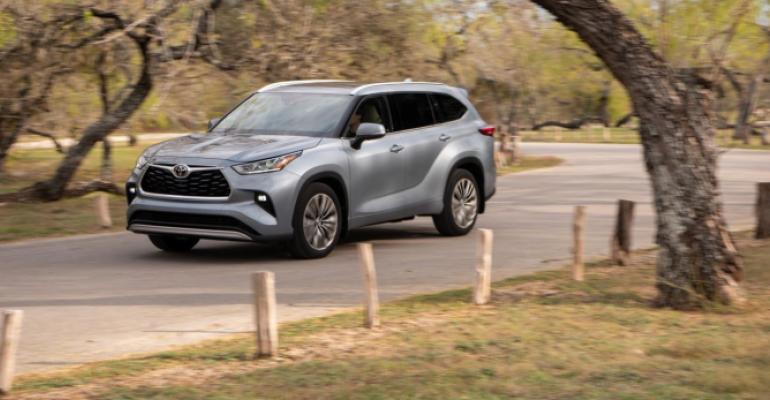 While the all-new ’20 Highlander gets significant updates, Toyota plays it safe given the model’s sales dominance in the three-row CUV segment.

SAN ANTONIO, TX – Rolling through Texas Hill Country, the ’20 Toyota Highlander doesn’t significantly stand out either from behind the wheel or when we stop to snap pictures of the all-new three-row CUV.

The standard carryover 296-hp 3.5L V-6 does a decent job of propelling the people-mover but pales in comparison to the ’20 Ford Explorer’s 380-hp 3.0L twin-turbocharged V-6. And despite Toyota highlighting the ’20 Highlander’s “sculpted new shape,” it doesn’t have the sheet-metal charisma of slightly larger new-kid-on-the-block competitors Kia Telluride and Hyundai Palisade.

But no-frills performance and looks haven’t kept the Highlander from becoming the best-seller among three-row CUVs, and Toyota’s cautious approach to its styling is a textbook example of an if-it-ain’t-broke-don’t-fix-it strategy. That said, however, the sixth-generation ’20 Highlander is a substantial improvement over its popular predecessor.

The new Highlander is built on Toyota’s TNGA-K platform that also underpins the latest Avalon, Camry and RAV4, and an additional 2.4 ins. (6 cm) of wheelbase and overall length compared to its predecessor boosts rear-cargo capacity.

For years, the Highlander occupied the Middle CUV segment as tracked by Wards Intelligence. But its larger footprint now moves the ’20 Highlander to the Large CUV segment, where it squares off against the Honda Pilot, Chevrolet Traverse, Nissan Pathfinder, Volkswagen Atlas and others.

The Highlander also gets an updated interior, and top trims offer a new 12.3-in. (31-cm.) infotainment touchscreen.

Toyota has finally acquiesced to adding Apple CarPlay and Android Auto (and abandoned its own Entune system in the process), and the ’20 Highlander also has Amazon Alexa, Waze and in-cabin Wi-Fi.

The standard, comprehensive Safety Sense 2.0 suite of driver assists puts the Highlander in line with most competitors. And while the standard 2.7L 4-cyl. has been discontinued, the Highlander has retained and refined something few in the segment offer: a hybrid.

We start out testing the LE that’s one step above the base-level L trim and take it for a mostly freeway drive from downtown San Antonio to the tourist town of Gruene about a half-hour away.

The V-6-equipped LE has blandly pleasing performance and mild road manners that have made the Highlander a hit. The 8-speed automatic transmission shifts seamlessly except for when a kickdown is required to pass, while road, wind and engine noise are minimal whether at highway speed or on surface streets.

All ’20 Highlanders come standard with front-wheel drive, and all-wheel drive is available for between $1,600 and $1,950. The top-tier Limited and Platinum trims get a more advanced AWD setup with a torque-vectoring rear differential that can allocate rotating force to either rear wheel and disconnect the rear driveshaft for more fuel-efficient driving.

Following a pit stop at the landmark Gruene Hall music venue that serves as Toyota’s staging area for test vehicles, we hop in a flagship Hybrid Platinum for a drive that snakes along the Guadalupe River. The all-new 186-hp 2.5L Atkinson-cycle 4-cyl. and twin electric motor-generators generate a combined 243 hp and 175 lb.-ft. (337 Nm) of torque.

While this is a significant step down from the 306-hp V-6 that powered the previous Highlander Hybrid, we don’t detect an appreciable decline in performance.

While the road winds along the river, the hybrid keeps its composure, and the added low-end torque provides extra grunt for climbing hills. The CVT is responsive and tuned to keep the inline-four from wailing when pushed, while the laminated windshield and front side glass available on the Platinum and Limited trim noticeably damps noise intrusion compared to the lower trims we tested.

As with the non-hybrid version of the vehicle, we notice little difference between the Normal, Eco and Sport drive modes except for mildly improved throttle response and the engine revs holding a bit longer. The hybrid also has an EV mode that allows electric-only driving for short distances.

The ’20 Highlander can seat seven with middle-row captain’s chairs that mimic the comfort and support of the excellent front seats. Swap out the captain’s chairs for a bench seat and the vehicle accommodates eight. Either way, the middle seats slide and recline, and the hybrid’s battery is tucked underneath.

The three-passenger third row is still too small for most adults, but focus groups tell Toyota they prioritize cargo space – and get an extra 2 cu.-ft. (56 L) of it thanks to the added length.

The new cabin gets prominent design, comfort, technology and materials updates. We like the bold intersecting shapes that make up the dash, although contrasting materials give it a hodgepodge look on top trims. 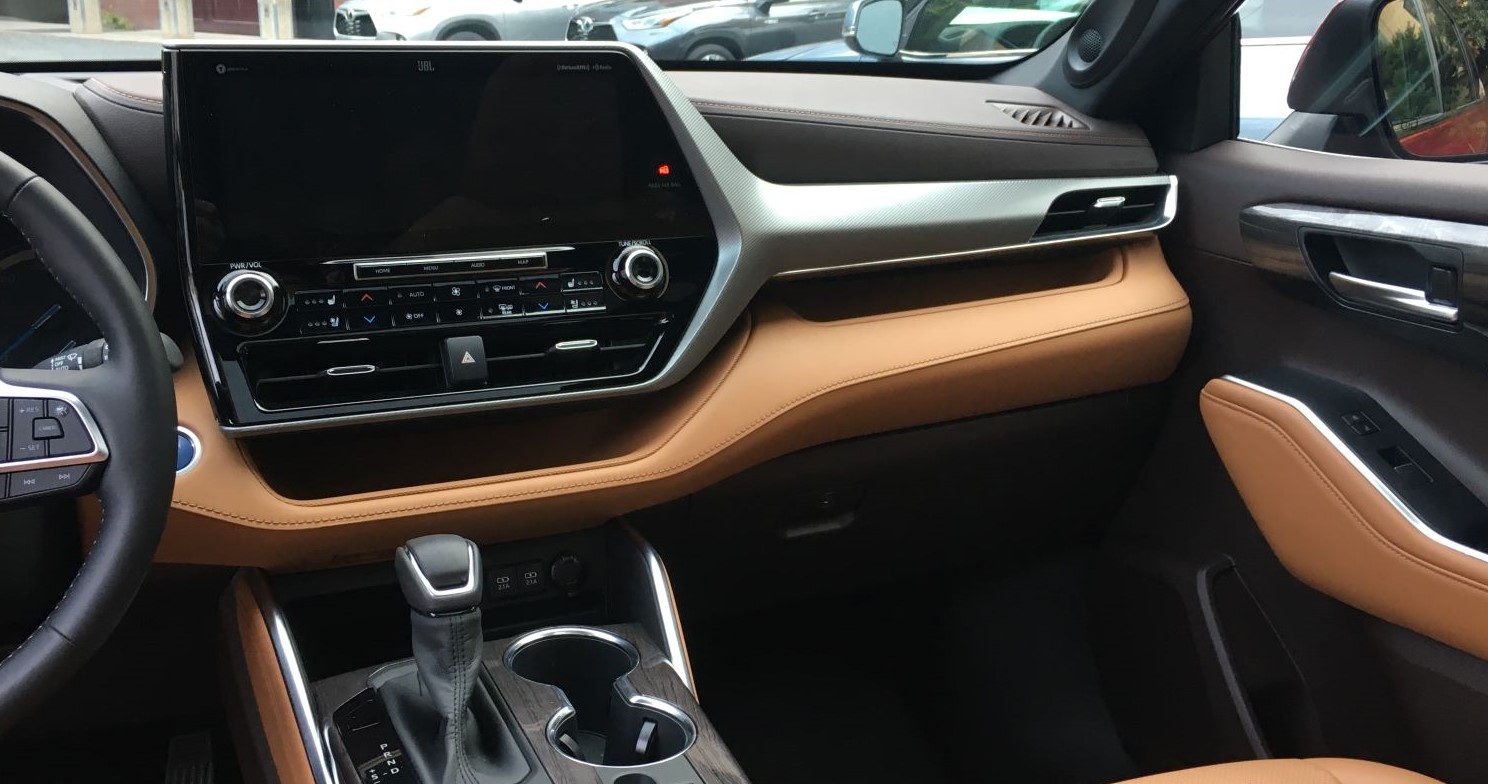 The 12.3-inch (31 cm) infotainment touchscreen sets a new standard in the segment and maintains the Entune system’s ability to reconfigure onscreen icons. The ’20 Highlander also borrows the first-rate 10-in. (25-cm) color head-up display that debuted on the new Camry.

The birds-eye-view camera that’s standard on the Platinum helps see around the vehicle and provides a live rotating 360-degree view, while the entire rearview mirror turns into a backup display for better visibility.

Connectivity is straightforward now that Toyota has added Apple CarPlay and Android Auto. Toyota lags other automakers in terms of telematics, only offering its Safety Connect that provides basic features such as automatic collision notification and stolen-vehicle location. Remote services such as door locking/unlocking via a smartphone app isn’t available for the base L trim.

With a maximum towing capacity of 5,000 lbs. (2,267 kg), the V-6 Highlander is on par with most competitors, while the hybrid can haul up to 3,500 lbs. (1,587 kg). AWD versions have a terrain-select system to tune the drivetrain for mud/sand, rock/dirt and snowy surfaces.

While the Highlander may not stand out in styling and performance, the vehicles parked outside Gruene Hall catch the attention of several current Highlander owners. Without prompting, they mention how happy they are with their vehicle – and voice intentions to buy this new model.

Based on this informal feedback, perhaps a conservative overhaul is all that’s necessary for the Highlander to remain successful among three-row CUVs. 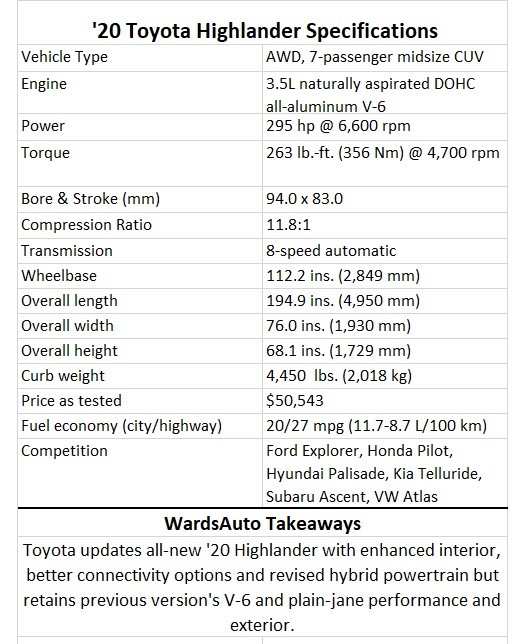