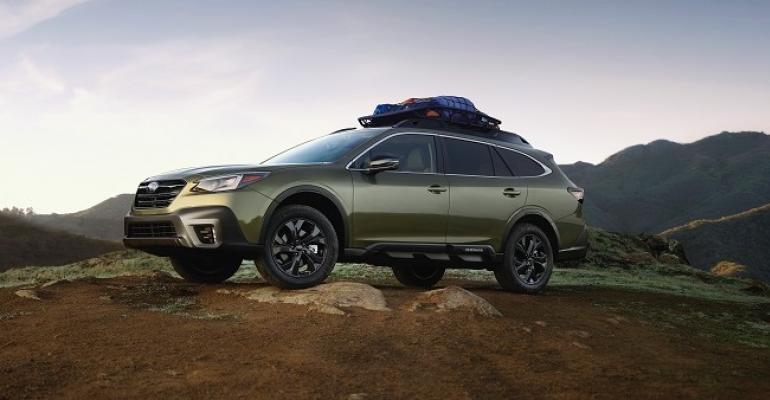 The midsize CUV has gone from a spin-off created as an act of semi-desperation to the automaker’s powerhouse vehicle.

FORT BRAGG, CA – In 1994, Subaru faced a big problem. Not many Americans were buying it.

“We had vehicles backing up at the ports,” says Peter Tenn, a planning manager for the Japanese automaker. “We thought we had to do a vehicle to bring us out of the mire.”

So the automaker spun off a version of its Legacy wagon. The new model got cladding here and there and its chassis was boosted a bit so it looked like a utility vehicle. It was dubbed the Legacy Outback.

With initial marketing help from commercials featuring Paul “Crocodile Dundee” Hogan, the new Legacy offshoot drew buyers, grew up over the years and eventually established its independence by separating from the Legacy name and going it alone.

It’s gone from a vehicle created as an act of semi-desperation to a brand powerhouse.

The Outback leads Subaru’s eight-model lineup with 2018 sales of 188,886 units, according to Wards Intelligence. (In contrast, Legacy sales were 40,109.) The Outback has enjoyed 11 years of consecutive sales increases. “It saved the company,” says a spokesman.

The redone vehicle offers a sleeker exterior (although not dramatically different) and a more refined interior than the outgoing model. The new Outback comes with an array of advanced technologies as Subaru positions to be a standout in that area with systems including:

Torque is respectable off the line. It flexes its muscle during quick midrange accelerations. The same engine is in the Subaru 3-row Ascent CUV that came out last year.

The turbocharged propulsion system replaces a flat 6-cyl. in the outgoing Outback that had a 5-year run. Tenn expects 30% of buyers will opt for the turbocharged engine with improved fuel economy: 23 city/30 highway mpg (10.2-7.8 L/100 km)

The new Outback uses a Lineartronic CVT. For drivers who like to do their own shifting, there are steering-wheel paddle shifters that run through eight simulated gears.

The rap on early CVTs was that they whined up and down too much, and seemed to do so aimlessly. Refined latter-day versions, such as the one in the Outback, are smoother and seem more sure of themselves.

The all-wheel-drive Outback offers a sophisticated and quiet ride on regular roadways, but it also is capable of seriously off-roading. That’s evidenced at a media drive event that included rough, rutted and rocky trailways in remote sections of northern California’s redwood country.

Depending on road conditions, drivers can use the Outback’s X-Mode system to tackle the likes of snowy and muddy weather.

The vehicle is built on the Subaru Global Platform. Engineers designed the platform with greater collision protection, agility, cabin quietness and ride comfort in mind. They seem to have accomplished that mission. Among the platform elements are a rigid backbone and various levels of high-strength steel. 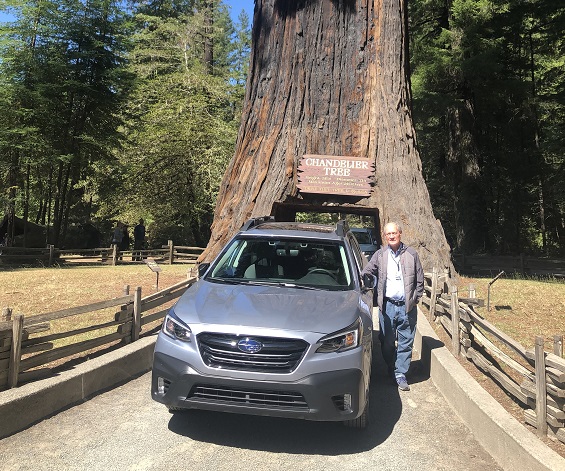 In much of its marketing, Subaru pitches the Outback to outdoor enthusiasts. When the new Outback was unveiled at the New York auto show in April, it was done so in a staging area that resembled a U.S. National Park setting. (Wards' Steve Finlay with Subaru Outback at a drive-through tree in northern California.)

Tenn describes the vehicle as “an outdoors tool that can be used every day and taken anywhere.”

An occupation breakdown of Outback buyers is No.1, educators; No.2, health-care workers (a lot of buyers are nurses); and No.3, people in technology fields.

The latter can be “a nightmare for retailers because they go to dealerships armed with a whole lot of technical information,” Tenn says. “That’s good, though, because they are educated consumers.”

The desire for vehicle safety is a common theme across demographic and psychographic lines, Tenn says.

Subaru assembles the Outback in Lafayette, IN. All of the vehicle’s steel is from the U.S. but most of the other parts are from Japan.

The Premium model currently is the Outback’s most popular.

A CD player is standard in upmarket models, optional otherwise. Yes, some people still use vehicle CD players. (I do.)

Twenty-five years ago, around when the Outback came off a Legacy rib, CD players were innovative. Today, their value sometimes is the subject of lively automotive internal debates.

“You’d be surprised,” says Tenn. “At meetings, half the people say, ‘Kill the CD player.' The other half says, ‘Well, maybe we should keep it.’” 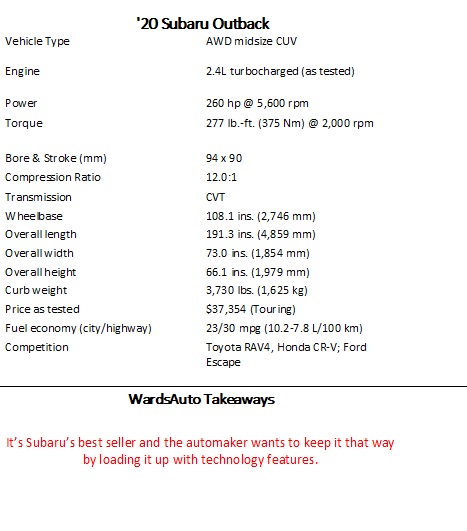