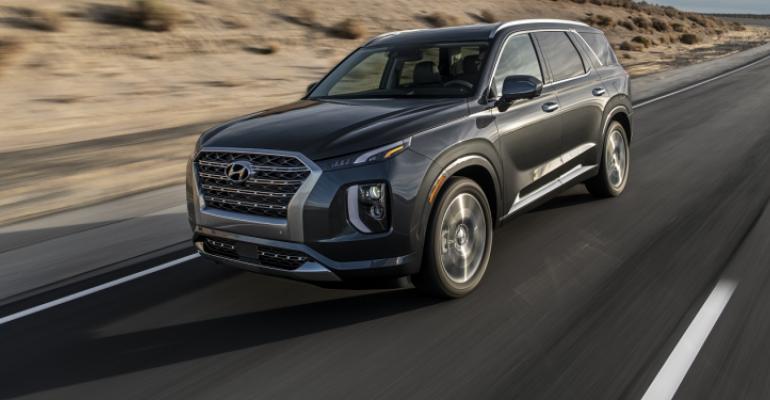 The ’20 Palisade’s eye-catching exterior, classy interior and cutting-edge technology give Hyundai an opportunity to play catchup in the midsize SUV segment.

COEUR D’ ALENE, ID – As U.S. sales of CUVs and SUVs ramped up in the past several years, car-focused Hyundai was caught with a hole in those red-hot segments, offering only the Tucson, Santa Fe and three-row Santa Fe Sport as its options.

The South Korean automaker is filling the smaller end of the gap with the Kona CUV, the California-only Nexo fuel-cell CUV and the even smaller Venue coming later this year.

At the other end of the spectrum, the ’20 Hyundai Palisade midsize SUV with three rows of seating for up to eight, elegant exterior styling, a refined interior, an impressive list of standard features and cutting-edge technology goes on sale this summer to do battle with three-row segment veterans such as the Ford Explorer and Toyota 4Runner.

Trims include the SE that starts at $31,550, the SEL at $33,500 and the Limited at $44,700. Even the base SE offers abundant standard features such as a Rear Seat Quiet Mode that allows front-row occupant to rock out while the second- and third-row audio speakers are muted, a one-touch button to slide the second-row seats for easier access to the third row and an armada of driver assists: forward-collision and pedestrian warning with automatic emergency braking, lane-keeping and lane-following assistance, full-range adaptive cruise control, driver-attention warning and automatic high beams. 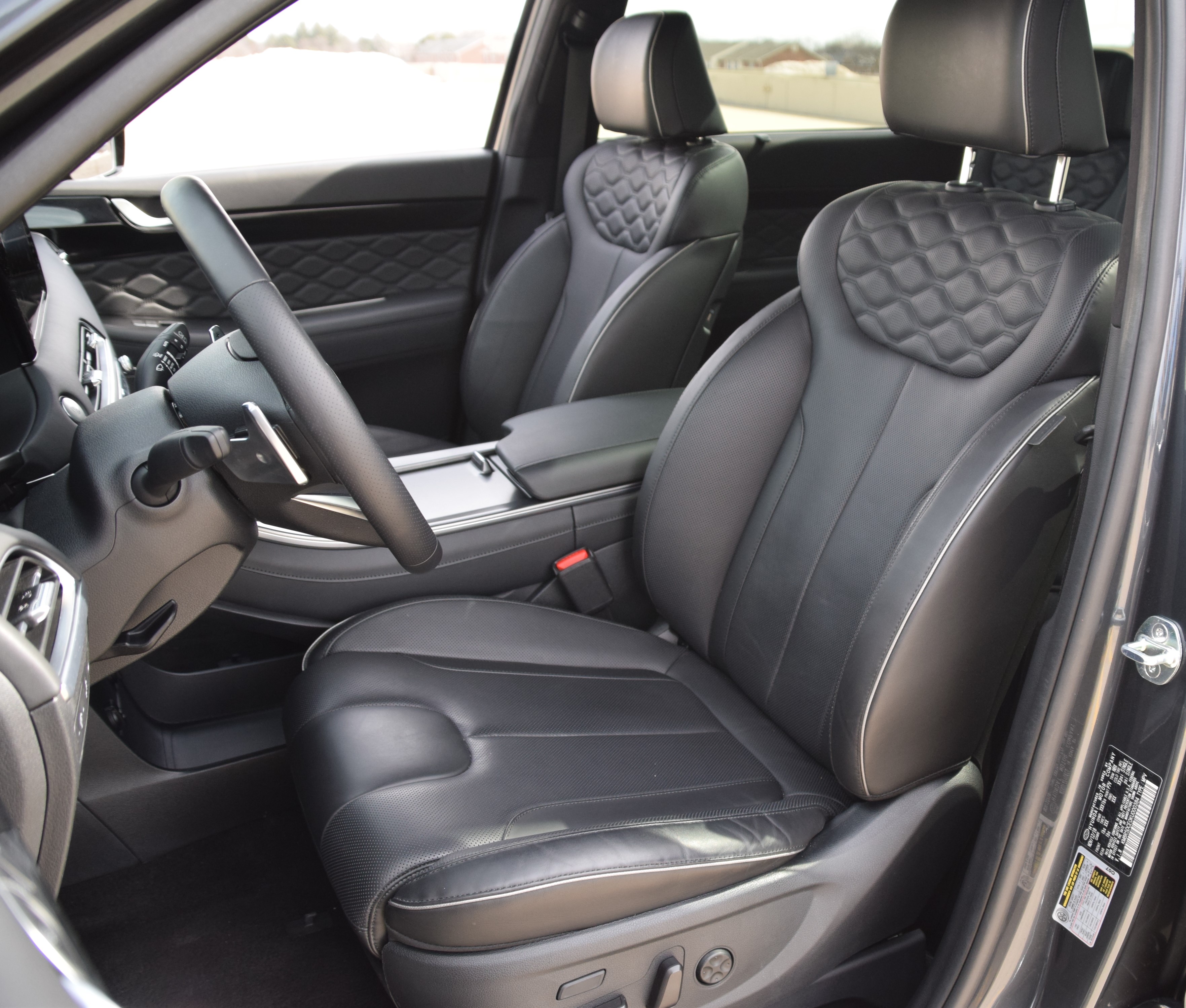 Our daylong test drive begins in the mid-level SEL trim that, with options and a $1,045 freight and handling charge, is priced at $43,115. Options include a $2,200 Convenience Package with an auto-leveling rear suspension and hands-free liftgate, a $2,400 Premium Package with second-row heated seats and power folding third-row seats and a $2,400 Drive Guidance package with a 10.25-in. (26-cm) infotainment screen with navigation and an in-car intercom that allows the driver to communicate individually with occupants in the second and/or third rows.

We’re immediately impressed with the interior while driving through city traffic to start our test route. Novel surfaces such as the textured pattern on the center console and stylized door-speaker grilles give the interior an upscale, modern appeal. The Palisade also has the slickest cupholders we’ve seen: One or both can be retracted to free up center-console bin space when not in use.

Slick design allows open storage bin or, with push of button, for cupholder wall to slide into place.

Once up to speed through Idaho mountain roads, the interior remains quiet and calm while plying a variety of roads, from interstates to potholed two-lanes. My driving partner and I (and later with a third passenger in the second row) carry on conversations without raising our voices, even though we were on rainy, windy roads.

The ride quality feels equally composed. The Palisade remains poised even with aggressive cornering, and we sense only slight body roll for such as a sizable vehicle. While the naturally aspirated V-6 doesn’t have exceptional acceleration from a standstill, it gets the Palisade quickly moving from mid-speed when we easily pass several large logging trucks on a narrow two-lane road. The transmission feels well-matched to the drivetrain and shifts almost imperceptibly.

Hyundai Has a Hit on Its Hands

For the second phase of the test drive we switch to the top-of-the-line Limited AWD that ups the luxury ambiance by adding Nappa leather seating, quilted leather door panels and a dual-panel panoramic sunroof. It raises the tech ante with a 12.3-in. (31-cm) LCD instrument cluster, head-up display and surround-view monitor. The Limited also comes with a unique Blind View Monitor that projects an image in the instrument panel of what’s behind either to the left or right side of the vehicle when a turn signal is activated.

Another new and much-needed feature is an Ultrasonic Rear Occupant Alert (also a part of the SEL Convenience Package) that scans the rear seats to detect movements of children and pets so they aren't inadvertently left and trapped inside the vehicle. The system will warn the driver via the instrument cluster, and if that doesn’t get their attention the horn honks and an alert is sent to the driver’s smartphone via Hyundai’s Blue Link telematics system.

The flagship Limited includes all the bells and whistles so isn’t available with option packages, although the standard middle-row captain chairs can be swapped for a bench seat. The total sticker price of our tester came to $47,605, including the freight and handling charge and $160 for carpeted floor mats.

That’s considerably less than the top-trim ’20 Ford Explorer Platinum we recently tested at $61,330 (but with a 380-hp 3.0L twin-turbocharged V-6) that Hyundai considers a prime competitor. After driving the ’20 Palisade and the ’20 Explorer within a week of one another, we give the performance edge to the Ford thanks in part to its RWD architecture and 4WD functionality, although it’s an expensive advantage considering the $14,000 price difference. And the Hyundai gets the nod for innovative technology.

Hyundai also is targeting the Toyota and Honda Pilot three-row CUVs that top out at $47,360 for the Platinum AWD with a 295-hp V-6 and $48,020 for the Elite AWD with a 280-hp V-6, respectively. The Palisade easily outclasses these two vehicles on exterior style, interior polish, tech prowess and third-row seat room. The Palisade not only fills the automaker’s SUV shortage with flair and value, but we predict Hyundai has a hit on its hands. 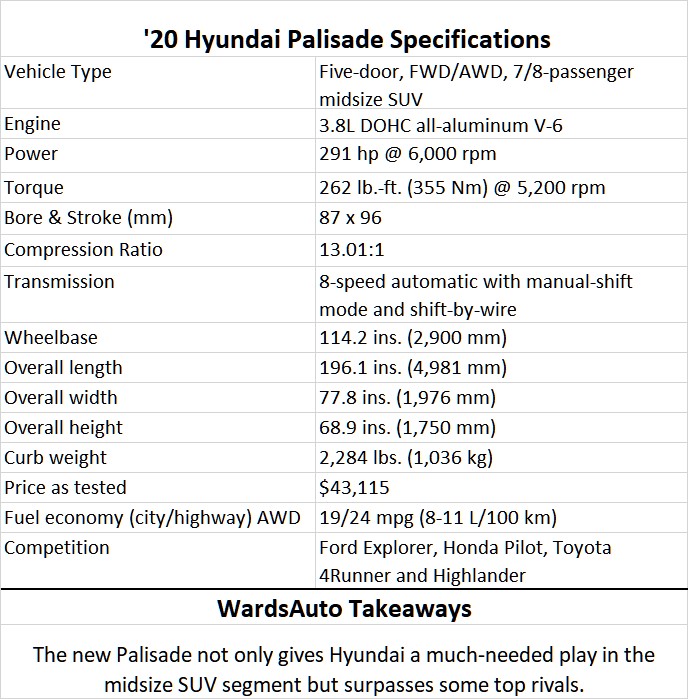