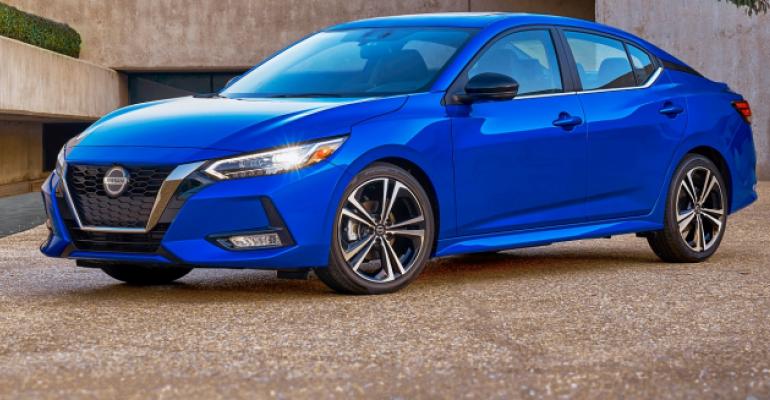 The new eighth-generation Sentra is a pleasant surprise, with a peppy engine, an attractive appearance inside and out and good feature content.

SANTA MONICA, CA – Compact cars like the Nissan Sentra once were considered a lock for sales. The first type of car many have owned, and for some the only type of car they have ever owned.

But the popularity of CUVs, and the introduction of ever smaller, less expensive CUVs, has negatively affected compacts.

Wards Intelligence segmentation data shows Upper Small cars like the Sentra have gone from 2.05 million sales in 2012, the year the car last was redesigned, to 1.33 million this year. Nissan is one of the few makes whose sales this year were better than in 2012 but, compared to last year, Sentra volume through November is roughly 40,000 units behind calendar 2018.

The Detroit Three have abandoned the C-car sector, but the Japanese, Koreans and Volkswagen press on, noting there’s still a lot of volume there.

The eighth-generation Sentra, test driven here recently, is a pleasant surprise, given past issues.

While the new Sentra lacks the hybrid variant of the Toyota Corolla, or the athletic expectations that come with the Mazda3 and Honda Civic Si and Type R, it manages to marry fuel efficiency, power and agility into one vehicle.

The Sentra rides on an all-new platform (one that could accommodate electrification, officials here say) and has a new engine for ’20: Nissan’s 2.0L naturally aspirated, direct-injected inline 4-cyl. from the Rogue Sport small CUV.

Mid-range torque and throttle responsiveness are excellent as we floor the sporty-looking SR grade tester on a surprisingly sparse – traffic-wise – Pacific Coast Highway in Malibu. Little engine noise is transmitted into the cabin, a major complaint back in 2012 in our first drive of the seventh-gen ’13 Sentra with the 1.8L.

While Nissan officials told Wards a few years ago that more engine options and body styles were being studied for the Sentra, right now there is only the 2.0L sedan, although officials here still seem to want more, including something higher powered for a possible sport grade (the NISMO and SR Turbo sport grades – both fitted with a 1.6L turbo from the defunct Juke CUV – are no longer available).

Reflecting a long degradation of the self-shifter, there is no manual transmission option for the ’20 Sentra. All models use a CVT from longtime Nissan supplier Jatco. Fortunately, it lacks any rubber-banding once common to CVTs and, as has been the case for a while with Jatco CVTs, has simulated shift points to mimic the experience of a step-gear automatic. Nissan prides the CVT on not having the feel of “holding a high rpm constant, letting rpms build as speed builds.”

Like most redesigns today, the ’20 Sentra is lower and wider than its predecessor for a handling reasons (low center of gravity equals sporty handling) and a sportier appearance. The driver’s seat also sits lower than in the ’19 car.

The Sentra now boasts an independent rear suspension vs. the torsion beam in the outgoing generation. The front suspension remains a McPherson strut type; all four corners get twin-tube shock absorbers. While we wouldn’t say ride-and-handling is as precise as with sportier C-cars the Civic and Mazda3, it still is quite good. The Sentra is planted and balanced through the twisty bits of our drive route, and potholes are barely felt (although truth be told the roads we travel don’t have many imperfections).

Nissan touts the car’s new dual-pinion rack electric power steering as improving feel and maneuverability. In our 2016 test of the refreshed seventh-gen Sentra, the car’s EPS wasn’t objectionable, thanks in part to its ratio dropping to 16.3:1 from the ’13 model’s 18.6:1. The latter had our arms aching due to so much turning of the wheel. The ’20 model’s ratio thankfully is lower still, 15.3:1. Steering effort needed at lower speeds is medium-light, a nice change from many sport-oriented models where you need to fight the wheel to move it.

Noise, vibration and harshness had been a huge beef in our first drive of the seventh-gen Sentra. Nissan lessened NVH in the car’s ’16 refresh and with the ’20 model quashed it again. More door and window seals, body sealing, as well as more soft acoustic material, is to thank. Yet, again, the roads and climate here don’t present much of a challenge. A blustery cold January day in Detroit may reveal some deficiencies.

Our admittedly spirited early morning run in a SR grade returns 30.5 mpg (7.7 L/100 km), but in the SV grade later in the morning we get an excellent 41.3 mpg (5.7 L/100 km) heading back south down PCH toward Malibu, thanks to light traffic and little braking.

The car’s exterior and interior are sporty and near-luxury. The Sentra, never really a looker, now has relatively the same design language as the larger, sexier Nissan Maxima 4-door, including a partially black C-pillar. A few exterior colors offer a cool (albeit $250-$595) black-roof option with all-black pillars.

The SV and SR grades’ interiors have some high-end touches, including soft-touch upper doors that even the Platinum grade of Nissan’s Titan pickup lacks, and, in the SV grade, optional real leather seats with a beautiful diamond-stitch pattern that is out of the ordinary and similar to what you’d find in a luxury sedan.

Apple CarPlay and Android Auto are available via the NissanConnect telematics system, while one front Type A USB connection port is standard and the SV and SR grades get one Type A USB port, one Type C port and a rear charge-only Type A port.

As with our November test of the refreshed Titan, the Sentra’s touchscreen lags. Selecting a SiriusXM preset station from the home screen requires two or three inputs. Another latency problem is encountered when hitting the menu hard button, which brings up a black screen that reads, “Loading.”

Nissan isn’t the only automaker with touchscreen issues (see the recent Honda class-action lawsuit), but we hope they can get these resolved soon, because redoing inputs takes driver attention away from the road.

Lane-departure warning, a feature of the ’20 Sentra’s standard Safety Shield 360 package, is great to have, but lots of pinging and wheel vibration occurs – maybe PCH lanes are narrower than most?

We extensively use adaptive cruise control, an optional feature, and come away largely impressed. There is one sudden braking event on PCH, perhaps because the closest distance setting is set. A later braking event is gentler on a longer following setting.

As with most ACC-equipped vehicles, the Sentra loses sight of the vehicle ahead in curves. It’s important to remember ACC is merely an assist technology and drivers should exercise caution when using it.

As we saw with the recent introduction of the next-gen Versa subcompact car, Nissan’s rear-door alert technology comes standard on the Sentra. It knows if a rear door has been opened and closed and advises drivers, via a message in the gauge cluster, to check the back for kids or pets upon engine shutdown.

The Sentra’s pricing largely is on par with the competition. The base grade starts at $19,090 for ’20, $510 below the ’20 Corolla’s entry price. Hyundai, usually the lower-cost option, starts the Elantra at $18,950 and Honda, usually the higher-cost option, begins the Civic at $20,550. However, the Civic does have standard ACC as well as lane-keeping assist.

Given the Sentra’s attractive price, coupled with its performance, looks and features, if Nissan keeps losing sales in the C-car sector it won’t be for lack of trying. 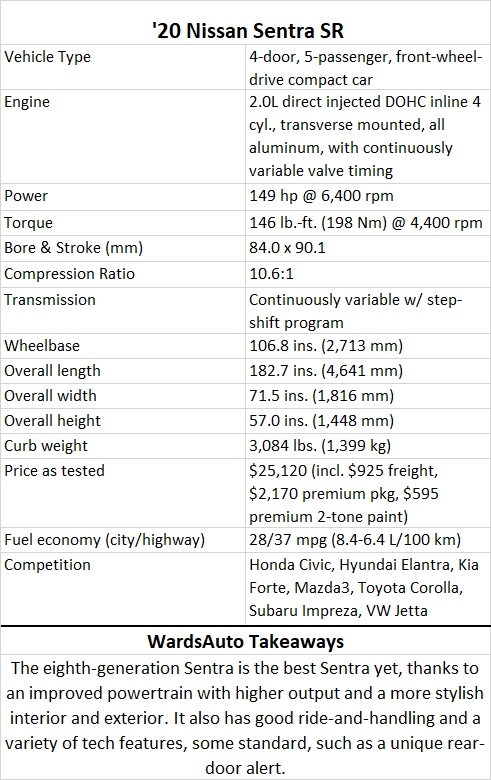