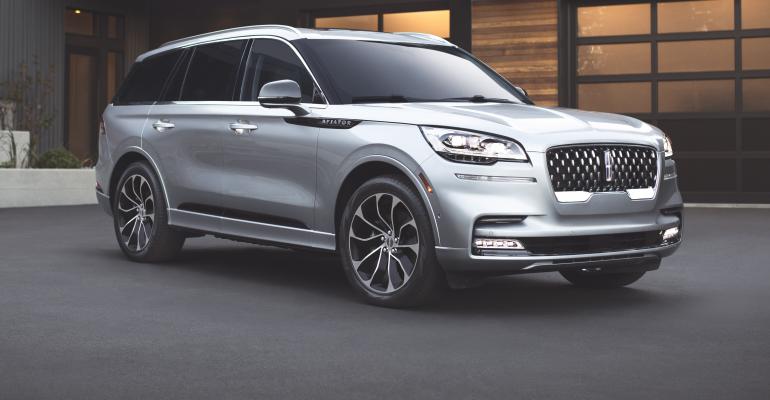 Launching now in gas-engine trim, the Aviator is Lincoln’s entry in the hot 3-row premium CUV segment against competitors like the all-new Cadillac XT6 and Infiniti QX60. The hybrid Grand Touring model arrives this fall.

YOUNTVILLE, CA – If you’re searching for an economy-minded hybrid SUV, scratch the Lincoln Aviator Grand Touring plug-in from your list.

But if you seek a premium, 3-row vehicle with the power of a big V-8 and enough electric-only range to handle around-town errands, give careful consideration to Lincoln’s latest addition.

Built on the same rear-drive, longitudinal powertrain layout as the Ford Explorer, the Aviator takes everything up a notch. The base Aviator, arriving in showrooms now, is powered by the same 3.0L twin-turbo V-6 as the Ford, tuned to 400 hp and 415 lb.-ft. (563 Nm) of torque as in the performance-minded Explorer ST.

That makes the gas-only Aviator a fine driver, with ample refinement and plenty of smooth power for its size, with quick engine response owing to low-inertia turbos that build intake pressure rapidly even at low engine speed.

Lincoln expects most buyers will opt for the standard Aviator, but the jewel of the lineup is the Aviator Grand Touring, featuring the most-powerful adaptation so far of Ford’s all-new Modular Hybrid Technology (MHT) powertrain.

A milder version of the MHT is offered in the Ford Explorer Police Interceptor and the civilian Explorer Hybrid, a powertrain that combines a 3.3L naturally aspirated V-6 and 44-hp electric motor for a combined system output of 318 hp and 322 lb.-ft. (437 Nm) of torque.

The Police Interceptor is deliberately tuned for aggressive stop/start function, given the amount of time police cruisers sit idle when the engine would otherwise be running and burning fuel.

After driving the Aviator GT, we think law enforcement may want to reconsider its options. We spent half a day tearing around Napa Valley in the Aviator GT, long enough to sample everything from its placid pure-EV operation to its robust hybrid combination that packs a serious punch whether off the line or at highway speed. 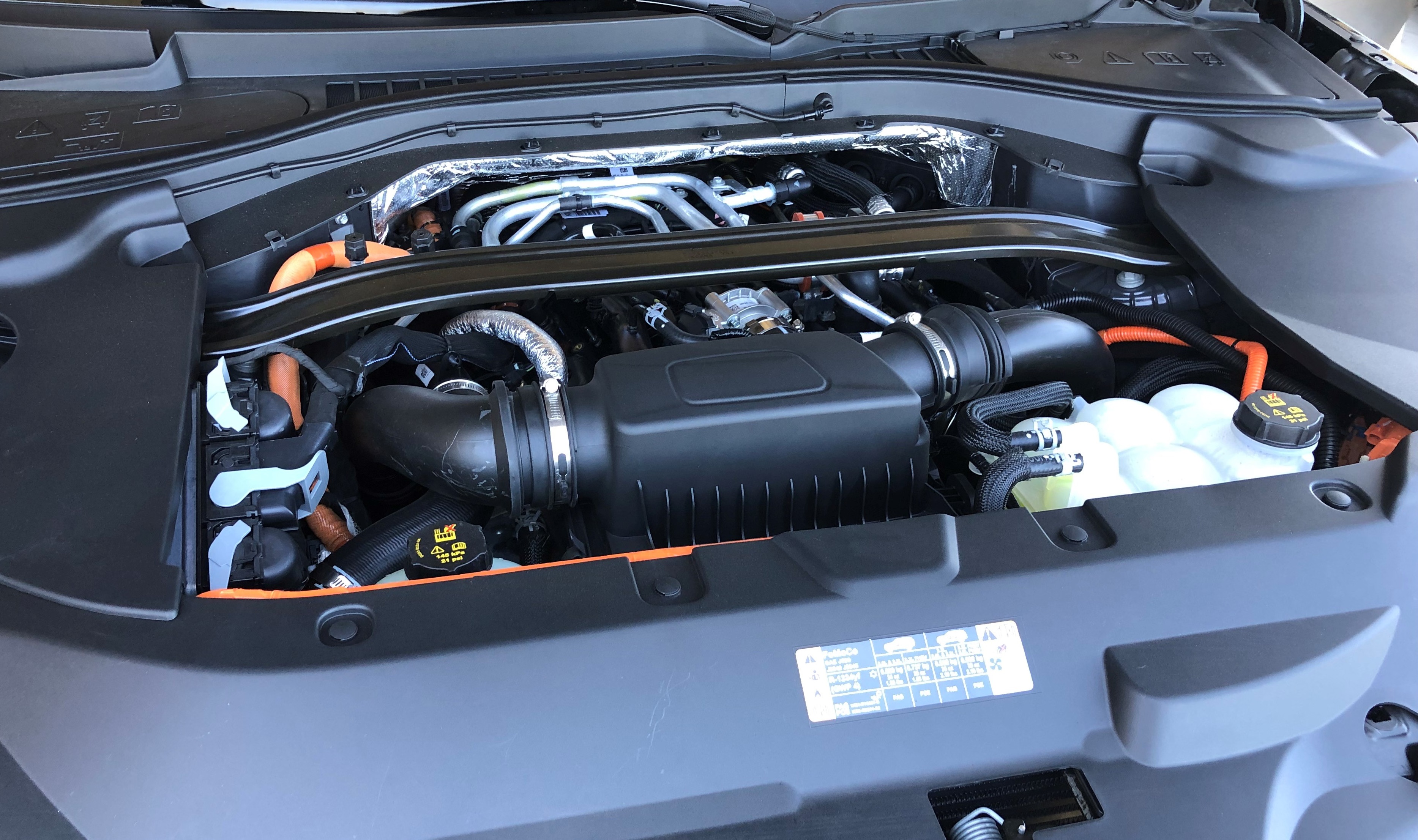 In combined mode, the plug-in hybrid powertrain packs a wallop, but in such a serene, Lincoln-esque manner you hardly realize 90 mph (145 km/h) has arrived so suddenly. Credit the integration of the engine, clutch, motor and 10-speed automatic transmission with applying the power in such a seamless manner, with nothing in the operation signaling the blending of gas and electric propulsion.

The automaker won’t specify how much quicker the hybrid is compared to the gas-only model, but it is certain to be on the order of a second or two in 0-60 mph (97 km/h) times, despite the hybrid’s extra 700 lbs. (318 kg).

Added weight comes from the 75-kW electric motor and clutch sandwiched between the V-6 and the transmission and the 298-lb. (135-kg), 96-cell Li-ion battery pack under the passenger compartment floor.

At the opposite extreme, in EV mode the Aviator is a plodder. While the electric motor can propel the vehicle to highway speed, it’s a slow process to gain that kind of momentum rather than the instant-on torque we’ve come to expect from high-voltage EVs.

As a result, the EV mode is best suited for around-town, lower-speed (think school zone to 45 mph [72 km/h]) operation rather than open-highway driving.

Our drive route was heavily skewed to open road, so we look forward to additional test driving in urban-suburban settings where we can plug in and charge the battery, drive our regular commutes and see how it performs.

Lincoln says the batteries recharge in 3-4 hours using the onboard Level 2 240V charger, or 8-9 hours on household current, depending on amperage.

Gas-only or hybrid, fuel economy is competitive but isn’t a strong suit. The gas-engine all-wheel-drive Aviator is rated at 20 mpg (11.8 L/100 km) combined, a step up from the 17-mpg (13.8 L/100 km) rating for its MKT predecessor, but similar to competitors such as the all-new Cadillac XT6. We observed about 16 mpg (14.7 L/100 km) in our test drives in the winding, hilly routes here north of San Francisco.

In addition to the multiple driver-selectable modes offered on the standard Aviator (Normal, Conserve, Excite, Slippery and Deep Conditions), hybrids get two EV modes, Pure EV for electric-only operation, and Preserve EV which saves and recharges up to 75% of battery capacity while driving in preparation for later EV-only driving.

Driving in Preserve EV, we recouped about 3 miles (5 km) of battery range while traveling about 25 miles (40 km).

Vault-like quiet is a hallmark of latter-day Lincolns, with the Aviator the latest example. Contributing to the serenity are laminated glass (windshield and side windows), significant sound-deadening efforts including 360-Degree Hood Sealing and a double-wall, heavily insulated dashboard, active noise cancellation and even specifically designed low-noise tires.

We did note an obvious exhaust tone when accelerating, likely influenced by the vehicle’s dual-valve muffler system.

The Aviator offers sophisticated technology as part of its Co-Pilot360 Plus option including full-range adaptive cruise control and lane-keeping, speed-limit-sign recognition with the ability to adjust vehicle speed accordingly (allowing for any driver-preset additional mph), evasive-steering assistance and parking assistance that handles braking, steering, shifting and acceleration in parallel and perpendicular spaces.

Most intriguing is the debut of Phone As A Key technology, which uses a driver’s smartphone to operate the vehicle, including locking and unlocking, opening the liftgate and remote starting via the Lincoln Way phone app. Up to four additional drivers can be activated to use the system via their phones, in addition to traditional key fob access and operation. 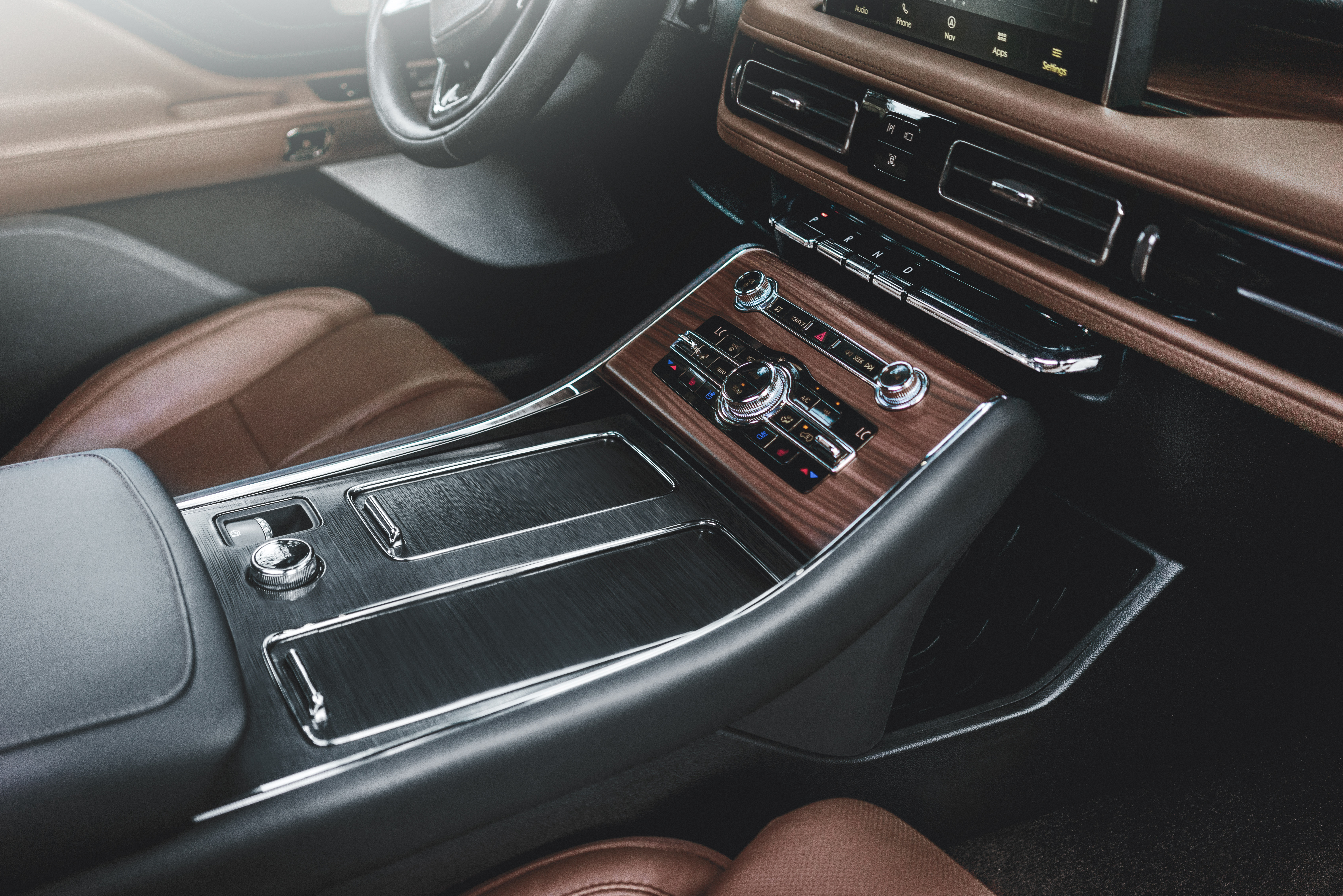 A 10.1-in. (25.6-cm) LCD horizontal touchscreen juts prominently from the center stack with wood trim dividing the rubberized upper dashboard from the lower, stitched-leather trim. Hard controls, including knobs for audio and climate, are accented by chrome and piano-black inlays against a wood-trim background, creating an audiophile amplifier-like appearance.

The Lincoln PRND pattern is here as well, using a row of buttons along the center stack in place of a shift lever, keeping the steering column less cluttered while also opening up space in the center console for cupholders, a cubby and the vehicle’s drive mode selector knob.

The segment has posted 123,963 deliveries through July this year, a 20% gain compared with the same period last year, but that volume pales in comparison to 7-month sales of 462,227 Middle Luxury CUVs and more than 2 million non-premium Middle CUVs.

All in all, the Aviator is clearly differentiated from its sister Explorer, with both all-new models representing significant improvements over their predecessors.

The Aviator’s base price is $57,285 (including $1,095 destination charge), with the Grand Touring starting at about $68,000. The upgrade to the Grand Touring hybrid isn’t worth the fuel-economy gain, but as a performance play it’s worth every Lincoln-head penny. 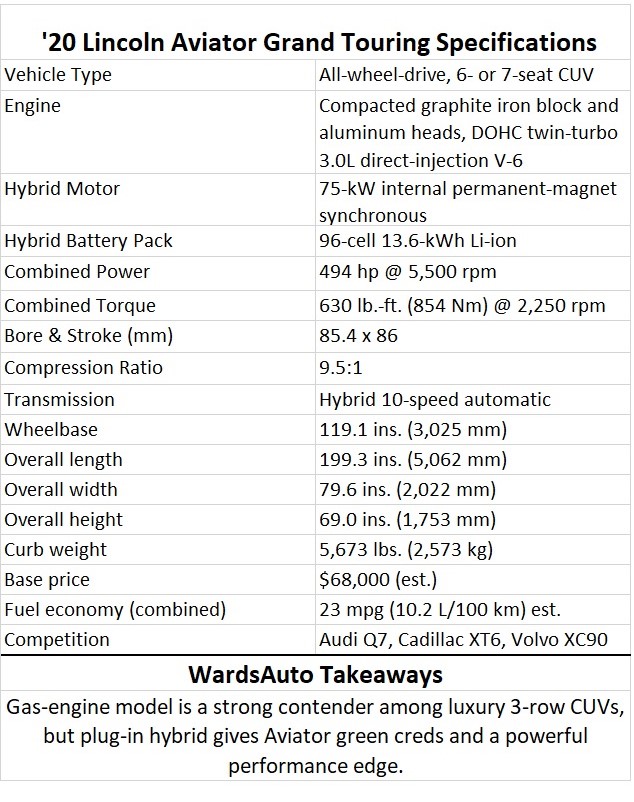