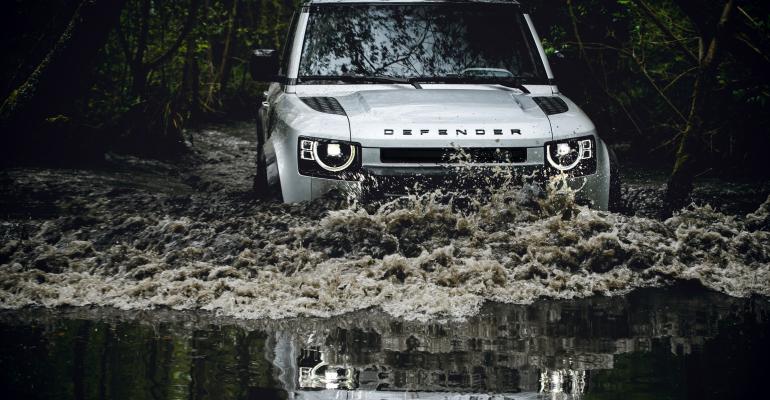 The New 2020 Land Rover Defender is being introduced with a fresh look and some deadly serious old-school river-fording, rock-crawling, cliff-hanging credentials. Pricing starts at $50,000.

Buying a vehicle that can literally go anywhere might have seemed like overkill in 2019, but this year, with fires, floods, hurricanes and a global pandemic turning the world into a real-life disaster movie, the vehicle with the best apocalypse technology wins.

And the leader this year looks like the 2020 Land Rover Defender, which boasts even more extreme off-roading capabilities than the Jeep Wrangler.

Elon Musk threw down the gauntlet earlier this year by saying he wants Tesla to be a leader in apocalypse technology with its upcoming Cybertruck, which he says is bulletproof and will be offered with an optional flamethrower.

But now Land Rover is introducing the new Defender to the U.S. with a fresh look and some deadly serious old-school river-fording, rock-crawling, cliff-hanging credentials.

And you don’t have to worry about stopping power after driving through water because the Defender automatically rides the brakes afterward to make sure they function properly.

And once you get to the store, there’s plenty of cargo space to load up on six months’ worth of toilet paper, baked beans and beef jerky. 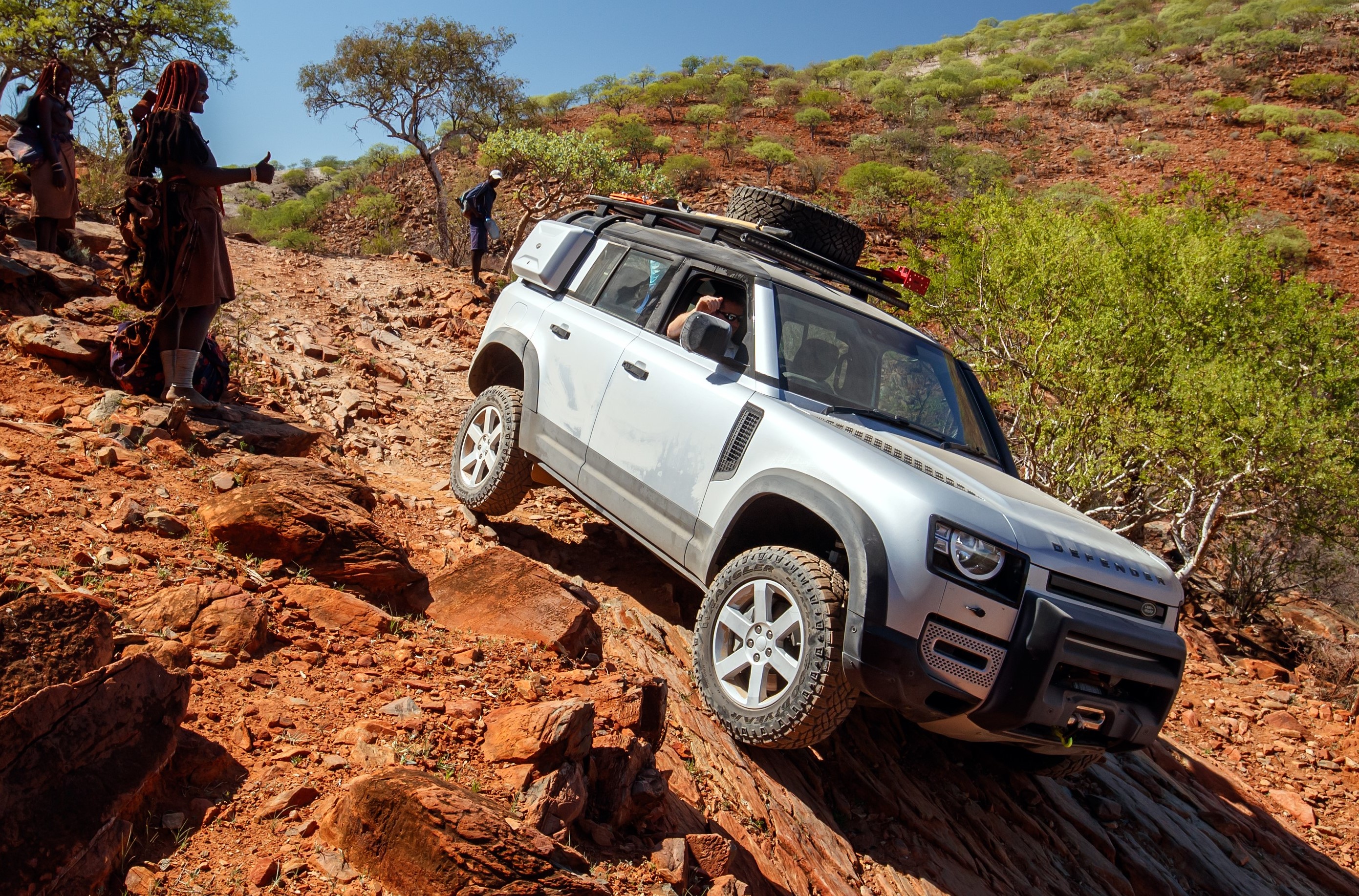 One of the reasons for all that cargo space is the spare tire is mounted on the outside of the side-hinged rear door rather than taking up space underneath the cargo floor.

That allows easy access if you need to fix a flat. The Defender does not have a flamethrower option, but you can easily remove the tire, light it on fire and roll it into an intersection to block marauding zombies if necessary.

If an earthquake collapses an expressway overpass on the way home, no worries. There’s plenty of horsepower and torque to climb the embankment and go around. 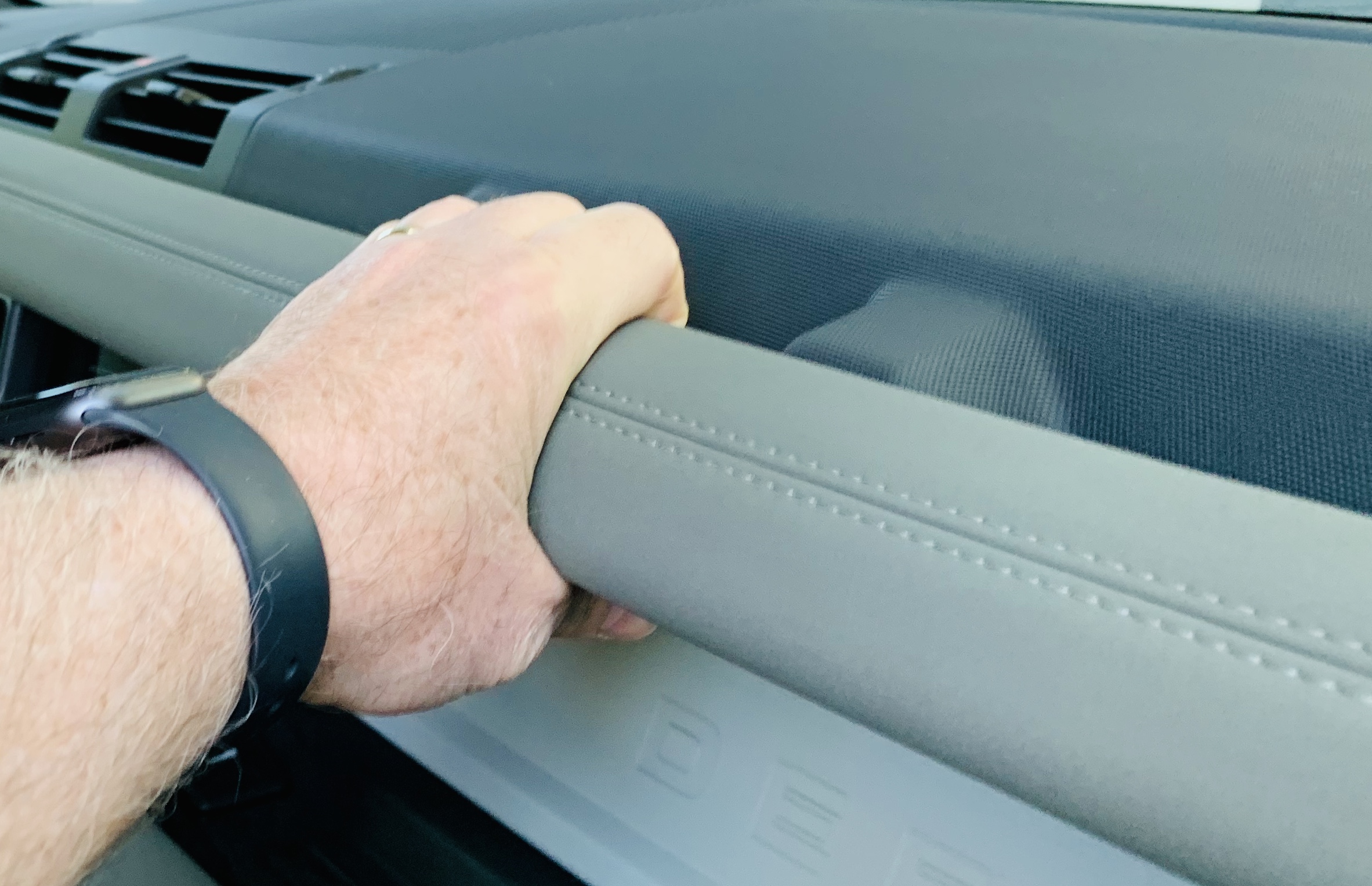 And, when you want to head back to the expressway by plunging down the embankment, which has turned into a rain-slicked cliff from all the rain, there’s no reason to sweat.

Plus, there’s an exposed magnesium cross-car support beam that serves as a sturdy “Oh sh**” bar (see above) on the instrument panel that your passenger can hang onto when the vehicle goes vertical on the way down. Like a modern office with concrete walls and visible ductwork, the exposed beam/grab handle is a key element of the Defender’s constructivist modular interior architecture, which communicates a highly functional nature that is a refreshing change from the overstated opulence of many luxury SUVs. 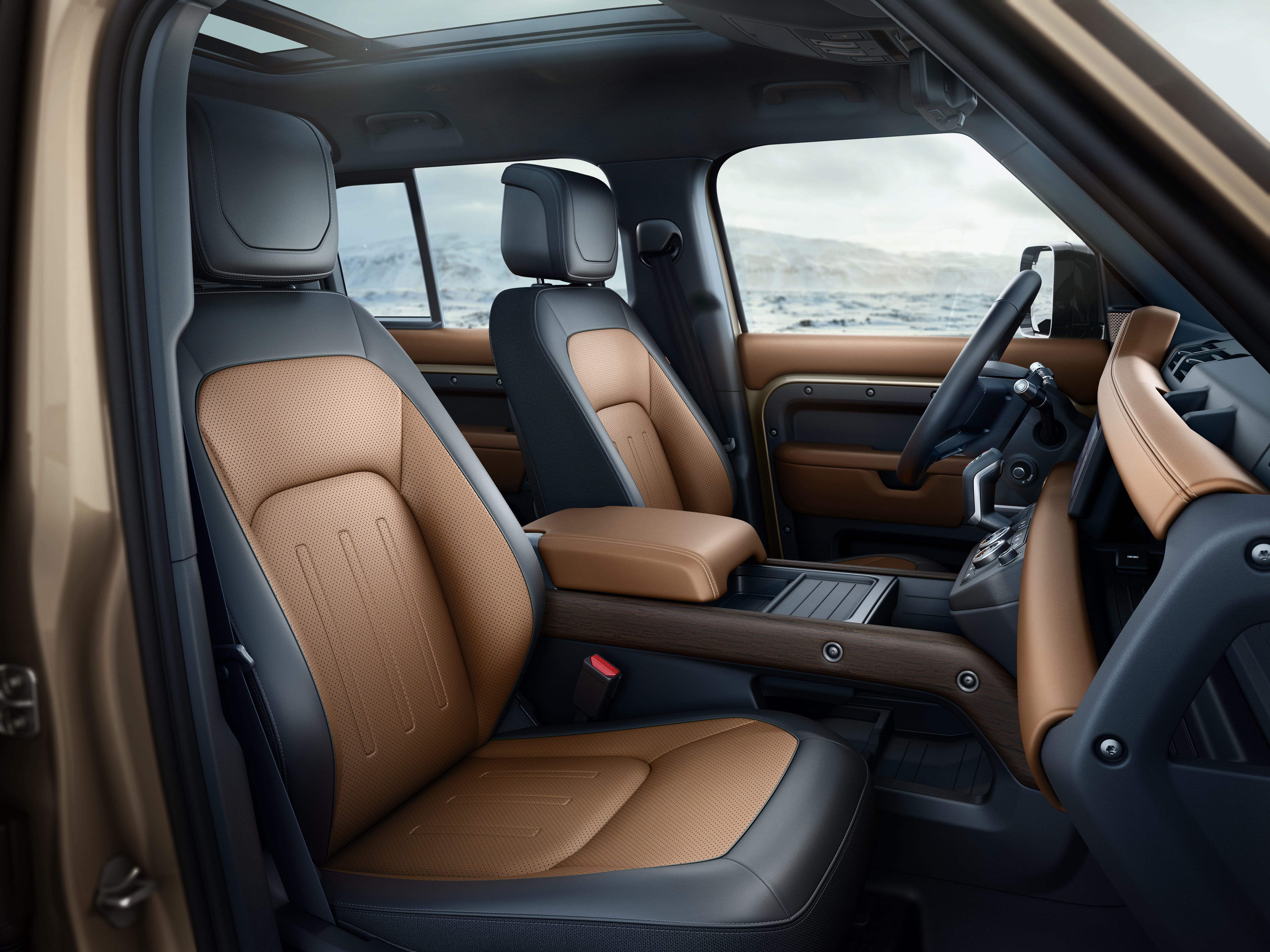 There is an astonishing, 10-gallon-hat-wearing amount of headroom throughout – the most of any vehicle we can remember. The seats are supportive and comfortable, and the upholstery – a handsome blend of leather and sturdy textile – is attractive but also looks very cleanable if something really bad were to happen.

And, should your dealership be wiped out by a tornado or buried in a mudslide while you are sheltering-in-place waiting out other apocalypses, the folks at Jaguar Land Rover will make sure you won’t run out of content to binge watch while hiding in your garage.

It enables customers to download data remotely, and the electronic updates cascade down to the vehicle immediately, with no need to visit a Land Rover retailer.

We did not have firestorms, hurricanes, floods, earthquakes or angry zombies to fully test out the Defender’s apocalypse capabilities during our brief vehicle loan, but if we had to pick any SUV in the world to survive those things, it would be this one.

Even so, we do have some criticisms. The speed and intuitiveness of JLR’s overall UX pales compared with top systems such as Mercedes-Benz MBUX, which responds to natural-language commands with lightning-fast precision. 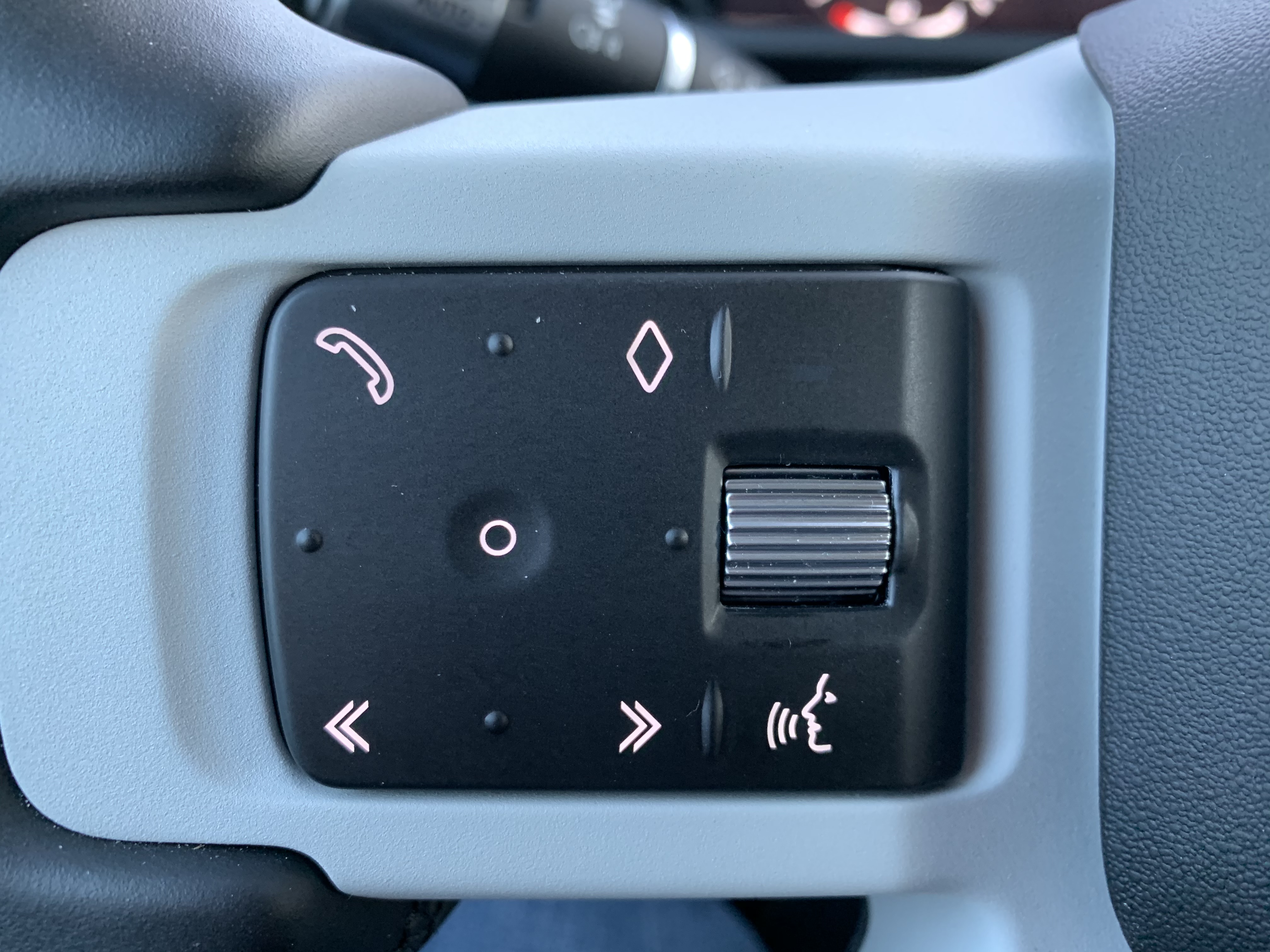 The Defender’s system did not respond to easy commands such as “take-me to 1234 Maple street.” Instead, it asked for prompts such as “navigation” and even then, results were mixed.

Also, Land Rover needs to improve how it labels functions. The meanings of the hieroglyphics on the menu controls on the left side of the steering wheel would stump an Egyptologist. Certainly drivers will crack the code with a little practice, but hey, in 2020, eyes on the road and hands on the wheel are a must.

But looking at the big picture, the 2020 Defender’s distinctive design and unmatched off-road capabilities make it a great value compared with other midsize and bigger luxury SUVs in an era when apocalypse technologies, all joking aside, might really be lifesavers.

The 4-door Defender is on sale now and the 2-door version is coming later in the U.S. for the 2021 model year.

The Defender doesn’t really have any direct competitors. On the low end, the Jeep Wrangler is less expensive and has extreme off-road capabilities almost equal to the Defender’s except for some areas such as wading depth. But the Wrangler is less refined inside and out.

On the high end, the Mercedes tank-like Gelandewagen is more luxurious and loaded with extreme features, but it starts at $131,000.

Further confusing the issue, the Defender’s unibody architecture technically makes it a CUV rather than an SUV, putting it in the same midsize luxury CUV segment as dozens of soft roaders that never leave pavement.

Here’s our advice: skip the sliding panoramic sunroof. You won’t believe how much peanut butter, canned tuna and powdered milk $1,750 will buy. 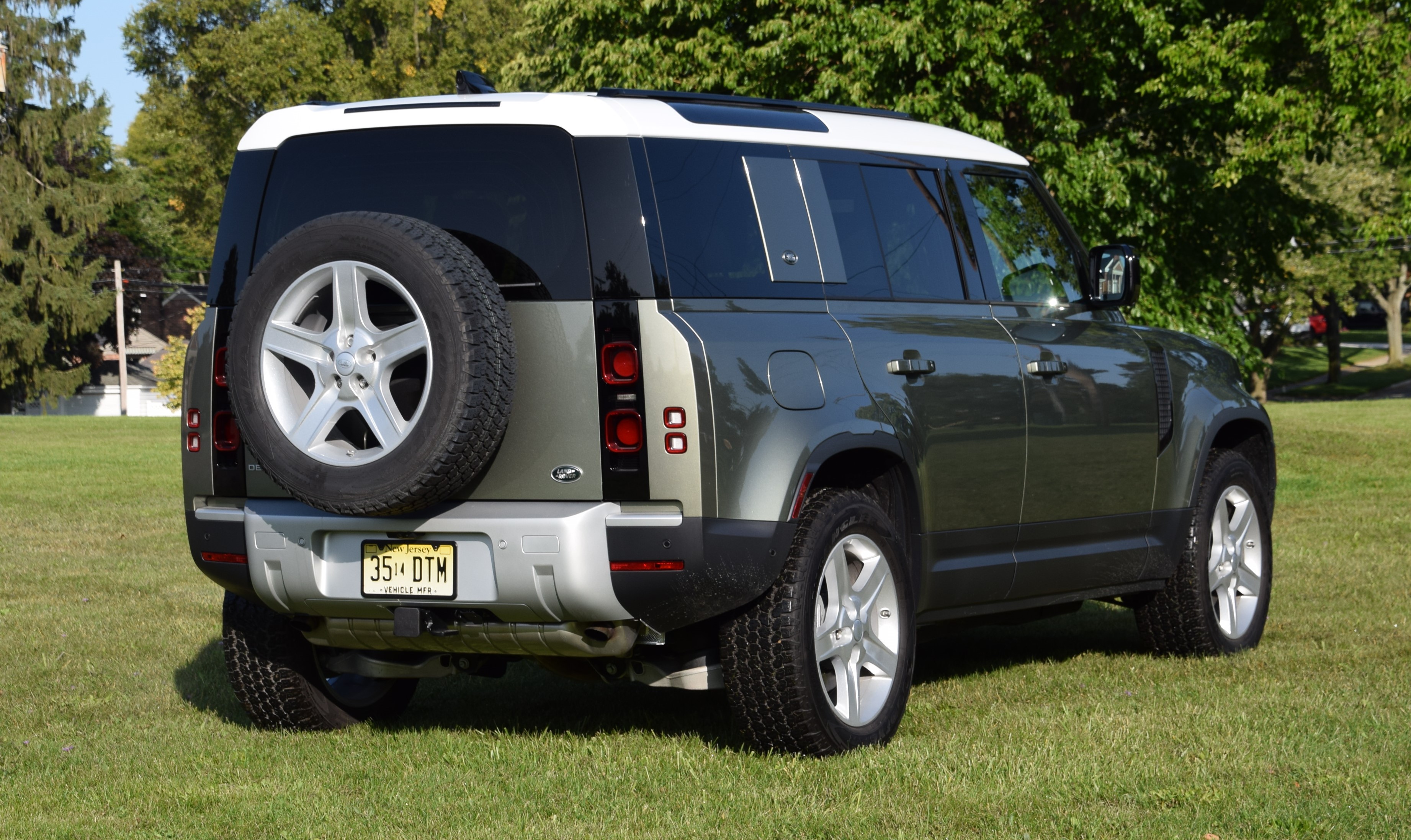 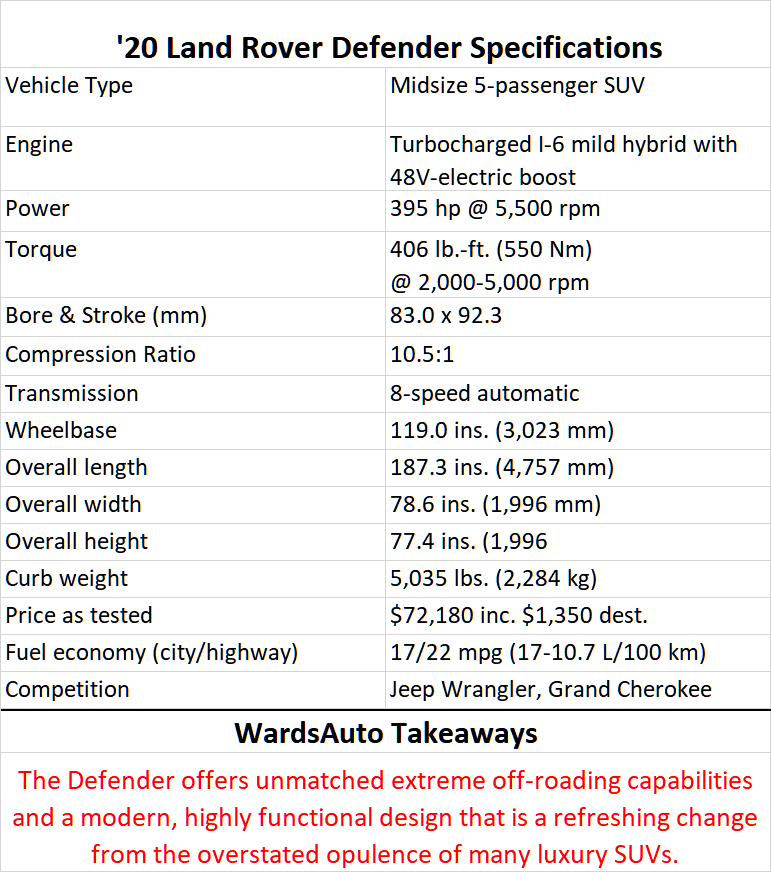