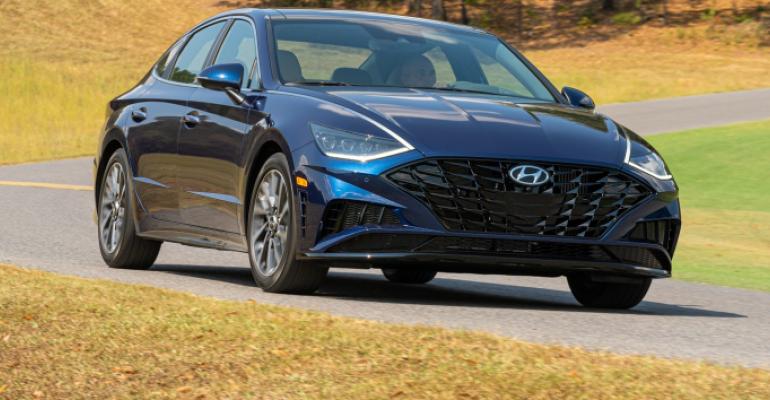 Hyundai’s redesigned 4-door is not just a pretty face, with great performance, handling, a lovely interior and scads of technology.

SCOTTSDALE, AZ –The ’20 Hyundai Sonata filtering into U.S. dealers harkens back to the sixth-generation Sonata, the ’10-’14 model that introduced Fluidic Sculpture design language.

The swoopy look was a stark contrast to the sedate exteriors the Japanese and American OEMs had been serving up, and put the competition on notice that Hyundai was to be taken seriously in the midsize-sedan sector.

But its successor, the ’15-’19 seventh-gen Sonata, shifted to more sedate sheetmetal – oddly at the same time the Japanese got aggressive with styling – and, per U.S. executives’ reasoning, sales fell.

Granted, sales of cars including sedans are down in general, as the rush to light trucks such as CUVs is stronger than ever (some 74% of all vehicles sold in the U.S. in November were light trucks). Hyundai knows to get any car some attention it needs something different, something eye-catching.

And something eye-catching it has with the eight-generation car. Both fluidic and sharp lines dress the car’s exterior, resulting in a beautiful design that wouldn’t look out of place on a vehicle costing three times as much. 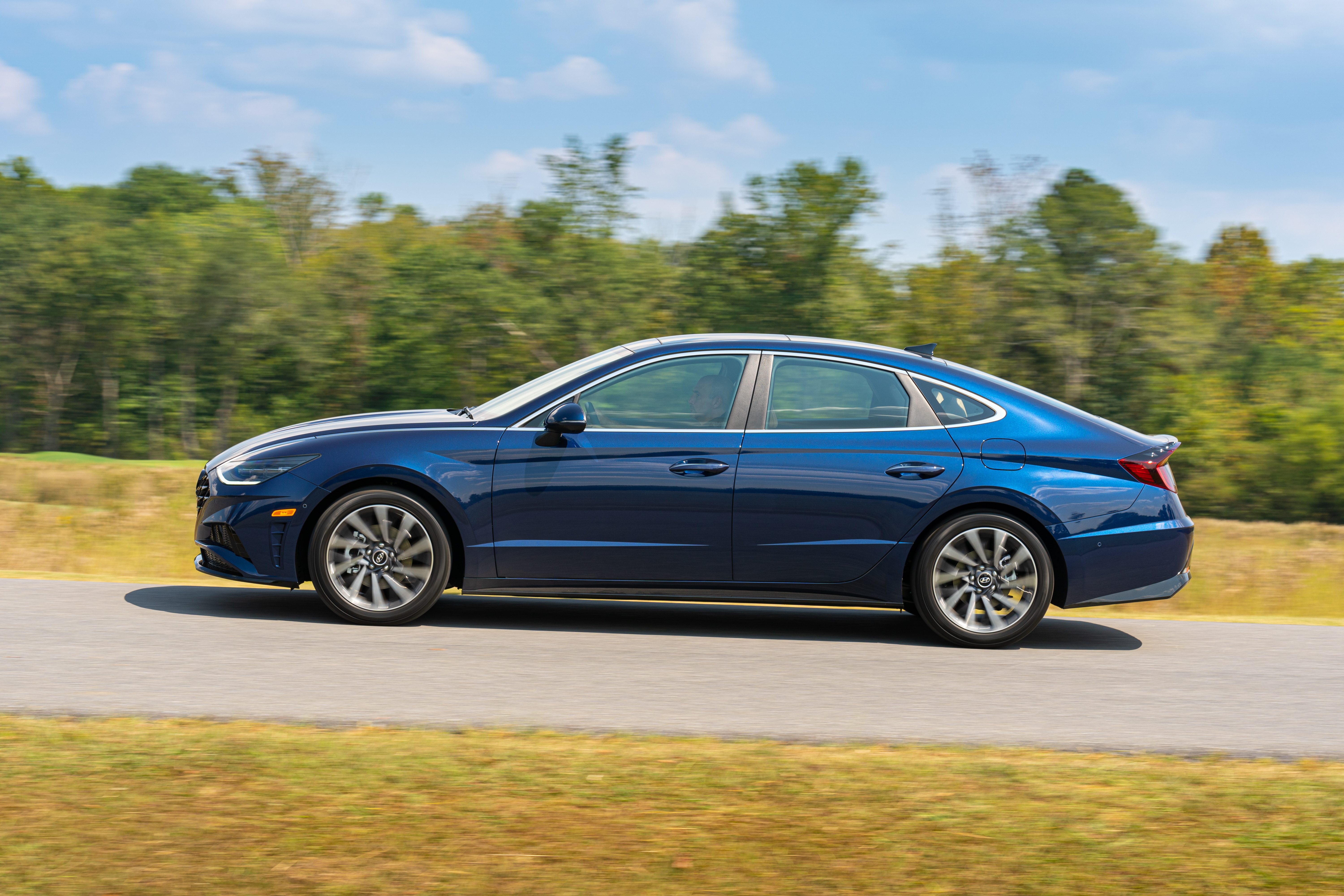 The look won’t be for everyone (truth be told we’re still not 100% sold on the tapered tail-end of the car and it’s oval-shaped LED lights), but at least it’s not another bland-mobile that will be placed on America’s roads. Plus, its softness contrasts with angular Japanese sedans.

But the new Sonata isn’t just a pretty face. It’s comfortable and handles well, too. Our quibbles are minor and mostly related to technology. More on that later.

The redesigned sedan dimensionally is lower, longer and wider than the generation it replaces, a common occurrence given that most automakers still participating in car segments want to infuse sporty handling or appearance into their vehicles, the antithesis of the character of most CUVs.

Wards tests two grades of the Sonata here in Arizona: a pre-production version of the forthcoming sporty N Line, as well as an SEL Plus model.

The N Line, due late next year, introduces a new engine to Hyundai’s lineup: a turbocharged version of the also-new 2.5L naturally aspirated I-4 in the base grades of the Sonata. The engine is mated to a new 8-speed wet dual-clutch transmission, loosely based on a similar design in the Veloster N sport coupe.

The pairing of the DCT and engine, making 290 hp and 310 lb.-ft. (420 Nm) of torque, makes for some seriously fun driving, especially when Sport and Sport Plus drive modes are engaged. Both hold gears longer and have more aggressive tip-ins, leading to some dusty takeoffs in rural areas outside Phoenix.

The camouflaged vehicle driven here is 90% there, says an engineer, with final tuning and calibration for specific markets still in the works.

Faster shifts are still on Hyundai’s to-do list, but, with the exception of a shuddering launch in our first seconds behind the wheel, we have no complaints about the speed, or lack thereof, of gear changes. During the remainder of our drive they are so quick as to be imperceptible.

The exhaust tone, which also still is being tinkered with, is a pleasing purr.

The overall character of the car is more sedate than expected, lacking the vibration or harshness some sport grades exhibit.

Because this is a N Line, not a performance N, Sonata, there are no suspension changes, such as adjustable dampers. All Sonatas have a MacPherson strut front and multilink rear suspensions, with the automaker retuning shocks and upping chassis rigidity for more athletic handling in ’20 models.

N Line fuel economy is a long way from being rated, so we can’t fully gauge real-world results. But, despite some early hot-dogging in our Korean-market tester we achieve 29 mpg (12.3 L/100 km), in our 45-mile (73-km) journey. Using adaptive cruise control during the latter half of our stretch helps us put aside our lead foot.

Ready at launch in the new Sonata is Hyundai’s clean-sheet 181-hp 1.6L turbocharged I-4, named this week as a 2020 Wards 10 Best Engines & Propulsion Systems winner.

Hyundai, which reworked the engine’s structure with optimized cooling and combustion systems, is employing what it calls a world-first technology, continuously variable valve duration or CVVD, changing the duration of the valve opening for improved performance and fuel economy.

Sport drive mode is as aggressive as we can get in the SEL Plus (lacking the Sport Plus mode of the N Line), but it does hold gears longer than normal or smart modes.

In a test of the car in the Detroit area in October for Wards 10 Best evaluation, our only gripe is too-early upshifts in normal drive mode, good for fuel economy but negatively impacting desired mid-range torque. Fortunately, the SEL Plus driven here has paddles to downshift for added oomph.

While we spend the first half of our Arizona drive in the 1.6T wringing out the engine, the latter half is in smart mode (essentially eco mode with a different name) to salvage our fuel economy. We finish with a respectable 29.9 mpg (7.9 L/100 km) after 63 miles (101 km) of driving.

Not driven here but tested in Detroit is the Sonata’s new base engine, a 191-hp 2.5L naturally aspirated 4-cyl. It has progressive technologies, such as an exhaust manifold integrated into the cylinder head, allowing for a quicker catalytic converter light-up that helps with emissions, plus direct and multipoint injection, with the latter used for low torque and low rpm driving and also reducing emissions.

The 2.5L’s 181 lb.-ft. (245 Nm) of torque doesn’t arrive until about 4,000 rpm, but behind the wheel the peak feels lower. Mid-range torque is surprisingly present, too. Start/stop technology operates almost invisibly. We come away liking it a lot.

Hyundai has developed a reputation for great interiors and the new Sonata’s doesn’t disappoint. Surfaces are low gloss with abundant soft materials. Hyundai Vice President of Interior Design Haksoo Ha notes how important it was to make areas automakers typically pay little attention to look good, like the steering shroud that is visible when the wheel is turned. 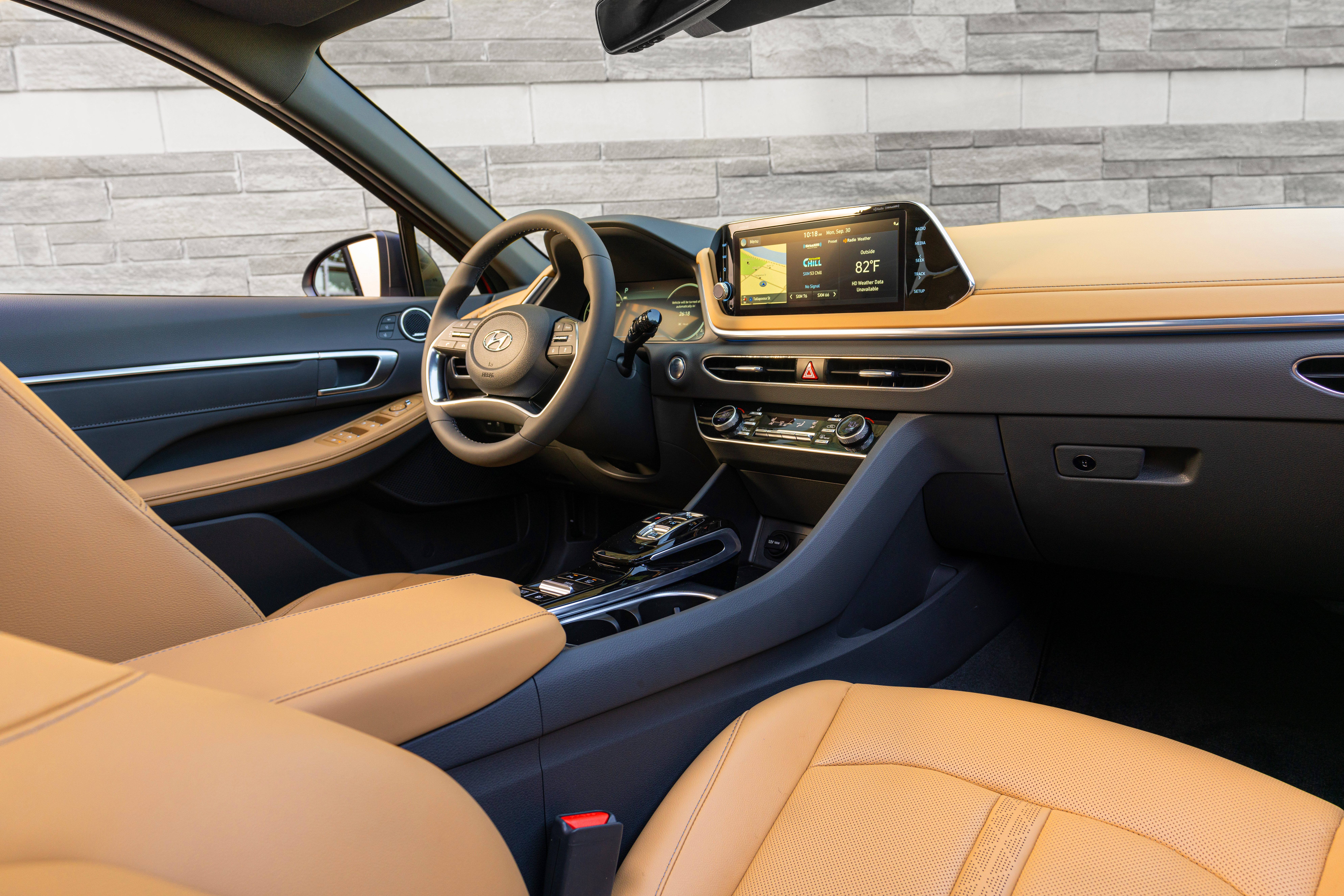 Technology progression is essential, he says, which is one reason why the automaker has gone to a frameless touchscreen sitting atop the instrument panel. A screen not confined to a traditional center stack is less costly to tear up and rework when the industry switches to yet bigger screens, he says.

The 10.25-in. (26-cm) infotainment display (the standard size is 8 ins. [20 cm] in SE and SEL grades) looks good and is well organized. Its width allows for a three-tile home page displaying navigation, audio and weather in our 1.6T tester.

The 12.3-in. (31-cm) fully digital gauge cluster in the upper grades allows for splashy red graphics when switched to or from sport drive mode.

Voice recognition, a so-so area for Hyundai in the past, is stellar in one Sonata here. Every radio and navigation command given is understood, with results returned immediately.

We test ACC, which Hyundai dubs smart cruise control, in both the N Line and SEL Plus Sonatas. Both exhibit good forward vision, slowing us even though we are a good distance behind slower traffic ahead.

The lane-keeping assist is another story. While Hyundai claims ping-ponging has been reduced, it is not eliminated. In one straight stretch with wide solid white lines we experience some side-to-side action.

In curvier areas, steering effort applied is minimal, causing us to keep a grip on the wheel.

The turn-signal cameras, which debuted in the Nexo fuel-cell electric vehicle and also are in the Palisade CUV, are a welcome addition to standard side-view mirrors, providing a better view during lane changes.

Another quirk in one of our Detroit testers, and similar to what some other reviewers experience here, were pinging alerts for seemingly no reason. In Detroit, what we believed to be the collision avoidance system was constantly pinging while we were stopped at a traffic light. Recalibration of forward sensors and/or reworking of software is essential. ADAS technologies that cry wolf will be ignored, or turned off, by annoyed customers.

Hyundai’s new digital key technology is not tested here but was demonstrated for Wards during the Sonata’s April New York auto show debut. It can be (not surprisingly) finicky, but it allows customers to leave the key fob home and unlock, lock and operate their car via an Android app (an iPhone app is roughly a year away). It would have saved this reviewer a recent trip home to get her key fob and seems like a technology about to explode given how wedded Americans are to their smartphones. 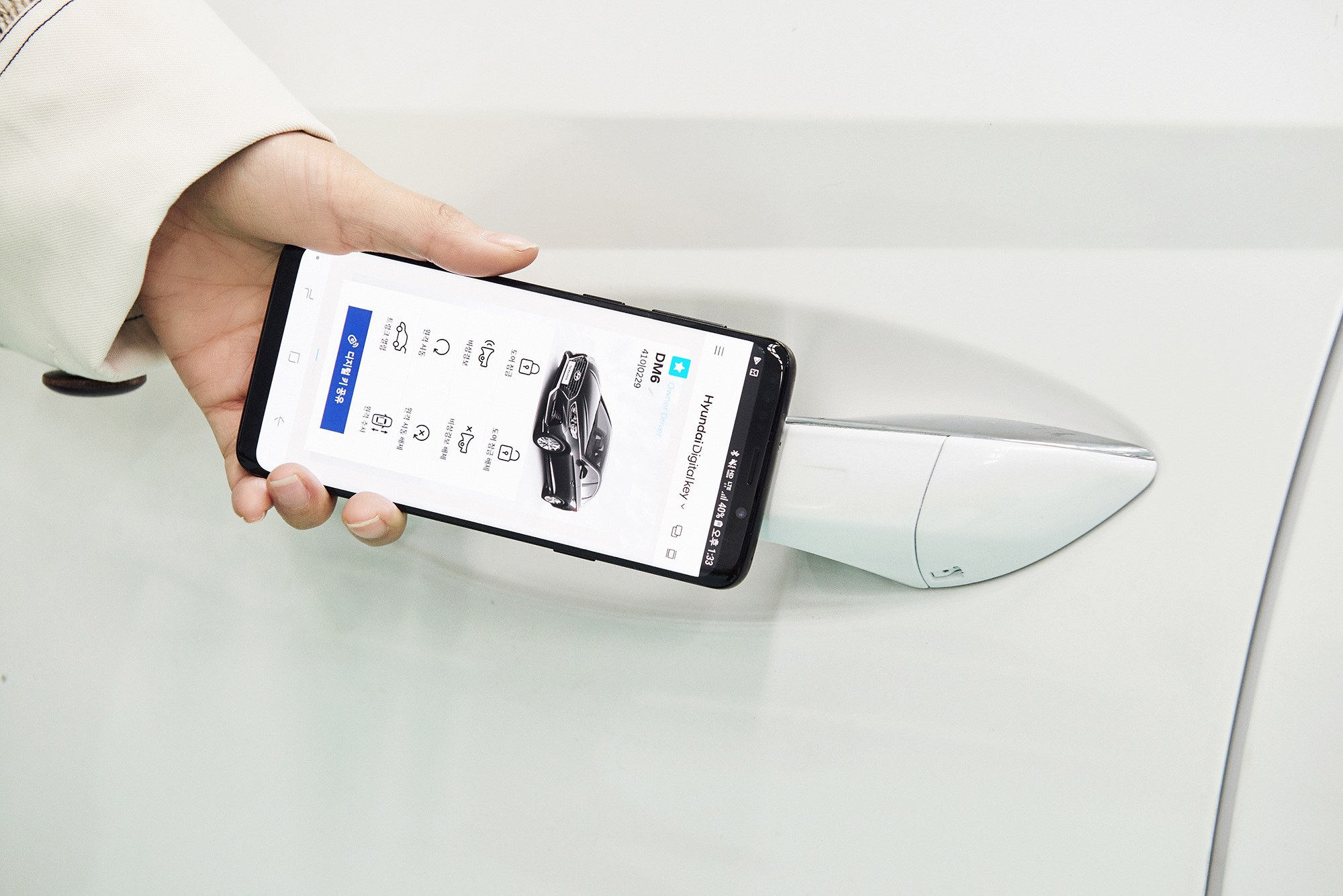 The ’20 Sonata, a near-perfect package, stands an excellent chance of reinvigorating its slumping segment. Based on looks alone, it should remind Americans midsize sedans still exist. Pricing, a longtime Hyundai advantage and starting at $23,400, will help too. 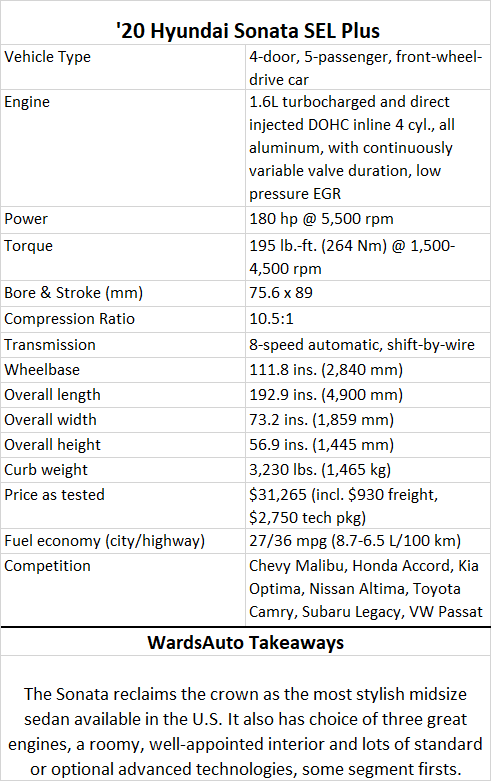