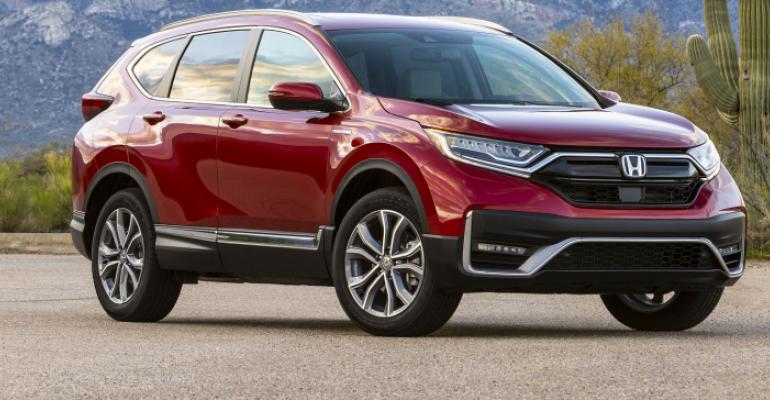 Testing this hybrid, we realize some stellar fuel economy in Honda’s most popular utility vehicle.

TUCSON, AZ – Despite light trucks making up more than half of new U.S. light-vehicle sales over the past decade, manufacturers have been slow to offer alternative powertrain options in CUVs, the top-selling light-truck type.

In the compact CUV sector, the Ford Escape Hybrid was a relatively good seller more than a decade ago, but that was about all the market had to offer in non-luxury, gas-electric CUVs.

Toyota came out with a hybrid RAV4 compact CUV in 2015, but it wasn’t until last year, when the fifth-generation RAV4 went on sale, that things really got cooking.

The new RAV4 Hybrid’s impressive mpg, both on paper and in real-world testing, coupled with a rise in production capacity, has led to great sales: nearly 93,000 last year (roughly a fifth of total RAV4 volume), Wards Intelligence data shows.

Just arriving at U.S. Honda dealers, the model also is another step toward the automaker’s goal of having two-thirds of its global mix by 2030 be electrified vehicles.

Honda will lean heavily on hybrids to achieve that target, with the vehicle type expected to account for 50% of Honda’s total sales worldwide by then compared with a 15% ratio for battery-electric vehicles and 35% for internal-combustion-engine-only models.

The CR-V Hybrid is based on Honda’s current-generation CR-V, debuting in ’17 and refreshed for ’20. Fuel economy for the new model, available only with all-wheel drive and using Honda’s 2-motor hybrid system already seen in the Insight, Clarity and Accord Hybrid (the latter a 2019 and 2020 Wards 10 Best Engines & Propulsion Systems winner), is rated at 38 mpg (6.2 L/100 km) combined, above the 29 mpg (8.1 L/100 km) of the conventional AWD CR-V.

While that’s below the 40-mpg (5.9-L/100 km) estimates of the ’20 RAV4 and ’20 Ford Escape Hybrid, as the sticker tells you: your mileage may vary, because, as is the case with many hybrids, you can easily surpass estimates.

Those are about the same figures we saw during our November 2018 test of the RAV4 Hybrid in equally suburban Carmel, CA, although a ’20 RAV4 Hybrid available for drives here hits only 41.6 mpg (5.7 L/100 km) on the mapped-by-Honda 11-mile route.

Inside the CR-V Hybrid, the digital gauge cluster has hybrid-specific displays and a unique lower center stack/upper console with gear-selection and drive-mode buttons. 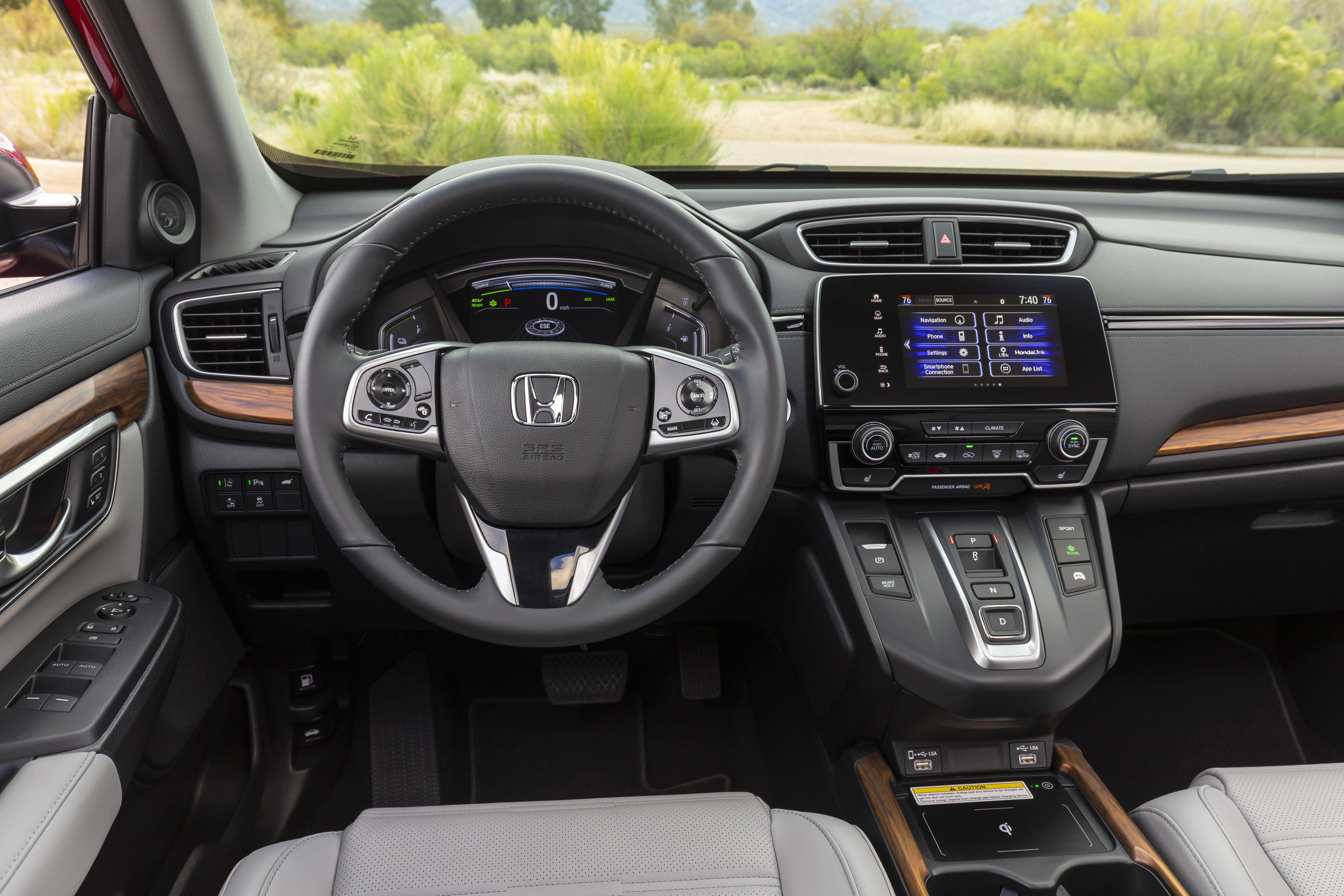 Wireless phone charging, lit USB ports and a so-called 3-mode center console with various trays that can be slid and lifted to access deep storage, is shared with the conventional CR-V.

We like the supportive, comfortable front seats, and the fact our $37,000 Touring grade has a power passenger seat – not something always available in other vehicles even at that price point. The Escape Hybrid Titanium has it, the RAV4 Hybrid Limited does not.

Storage is plentiful. Both front and rear cupholders are deep, but only the front ones have retractable nubs for grip. The rear cupholders, in the pulldown center armrest, are merely plastic holes.

Honda touts its best-in-class rear legroom, noting it has 3 ins. (76 mm) more than the RAV4 Hybrid. However, the difference isn’t obvious when sitting in the backseat of both vehicles.

Although smaller on paper than the RAV4’s, the CR-V Hybrid’s cargo area is generous, aided by lowering the 60/40 split rear seats. Honda placed handy levers on each side of the cargo area to release seat backs. It was able to retain the 60/40 dive-down seats thanks to creative ducting to cool the battery pack beneath the cargo floor. An inlet is next to the rear passenger-side seatback.

The CR-V Hybrid isn’t perfect. For starters, its infotainment system could use improvement. The screen isn’t high-resolution, meaning the graphics and fonts lack vibrancy.

Some menus don’t offer logical options. After pairing a phone (a relatively quick and easy process), it is impossible to tell if contacts uploaded, normally an occurrence that is quite obvious on the main phone screen.

But instead that screen shows a prominent icon of a phone, my phone number and four virtual buttons: transfer, mute, touch tones and “hang up.” The latter makes no sense as I am not on a call. Trying to use voice recognition earlier to call my office phone returns the calendar and the clock being displayed instead. Oy vey.

Voice recognition was more successful when tuning in a SiriusXM station, although it was a clunky process, requiring me to first say “Audio,” then “SiriusXM,” then the station name.

The RAV4 Hybrid’s infotainment is similarly underwhelming (we deemed its screen “fuzzy and dull” in our 2018 test), so Honda isn’t at a disadvantage. We haven’t yet tested the latest Sync system in the Ford Escape Hybrid but expect it to be a step ahead of the CR-V and RAV4’s infotainment systems.

The CR-V also boasts a quieter cabin and smoother, more supple ride than the RAV4, which feels more truck like in its ride and handling than the Honda. Steering also is more direct at lower speeds. The RAV4’s errs high-ratio, requiring bigger inputs to turn the wheel.

We think the RAV4 has an advantage on interior style. It has more progressive elements inside its cabin, such as bolder colors and patterns, seen in the open bins on the instrument panel and center console of the RAV4 here.

Coupled with its real-world fuel economy and impressive feature list, the CR-V Hybrid – assembled at Honda’s Greensburg, IN, plant, with its 2-motor system sourced from Ohio –  is a relatively good deal, even the Touring grade, which although pricey, is about the average cost of a new vehicle in the U.S. 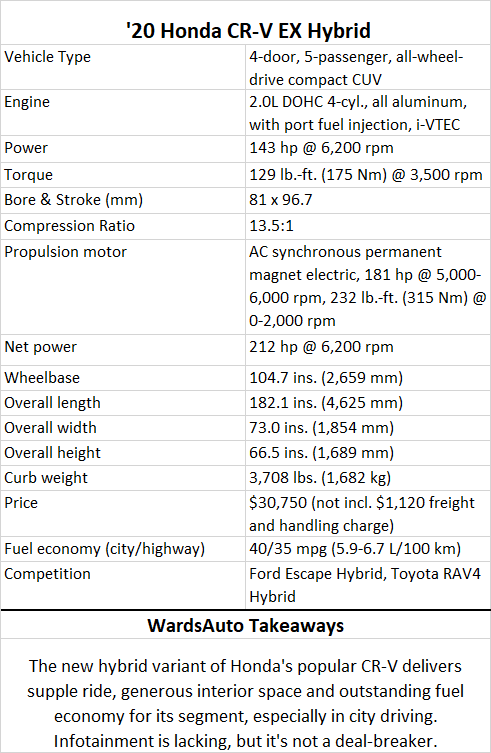