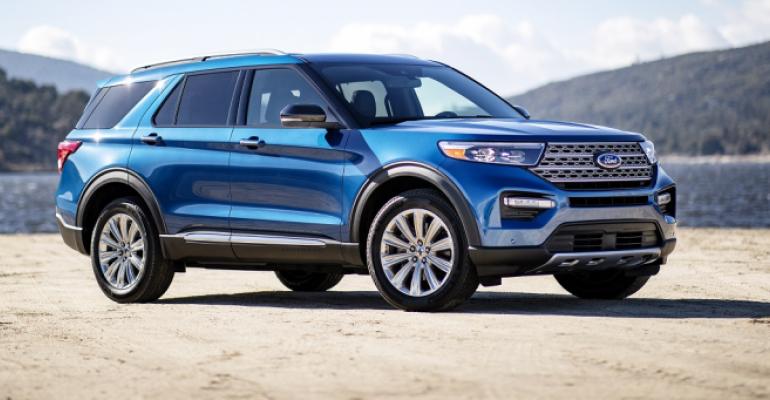 The ‘20 Explorer isn’t radically different from its predecessor on the outside but features plenty of updates in the engine bay and interior.
Test Drives

The ’20 Ford Explorer goes back to its rear-drive roots but gets updated with the latest tech to retains its SUV sales leader status.

STEVENSON, WA – While the Chevrolet Blazer and Jeep Cherokee were first, the Ford Explorer is largely credited with kick-starting the SUV craze with its debut as a ’91 model.

Six generations and millions of Explorer sales later, the appetite for SUVs has reached the point where U.S. automakers have all but abandoned cars in favor of these preferred family-haulers and profit-padders. As such, the all-new ’20 Explorer is a crucial volume vehicle for Ford.

On the outside, the redesigned Explorer isn’t radically different than its predecessor, but simply a sportier-looking version with a larger grille, longer headlamps, beefed-up wheel arches and a more sloping roofline.

It’s underneath the sheet metal where this generation differs, going back to its rear-wheel-drive roots to improve handling and towing but retaining unibody construction.

The latest Explorer comes in six trim levels: base, or Explorer, and stair-stepping to XLT, Limited, Limited Hybrid, Platinum and ST. While the base model starts at $32,765 – just $400 more than its previous equivalent and with more standard equipment – moving up trim levels substantially increases the sticker price as well as price differential between its previous model-year peer. For example, the flagship Limited starts at $58,250, or $4,000 more than the outgoing ’19 model.

We sample them all here during a hosted media drive, except for the base, and drive away in the Hybrid for extended time behind the wheel. But the Explorer experience begins with an ST, plying a scenic route from nearby Portland into the Columbia River Gorge.

As with its model line peers, the ST includes driver-selectable performance modes: normal, sport, trail, slippery, tow/haul and eco, plus deep snow and sand modes on 4-wheel-drive models. We choose sport mode for most of our ST seat time and come away duly impressed with its performance.

The optional 12.3-in. (31 cm) digital cluster keeps vivid tabs on various vehicle functions, although we mostly eye the tachometer redline while pushing the ST.

Switching into a Limited model, its 3.0L V-6 displays equally stout performance, while the 2.3L I-4 in the XLT and Limited ably climbs grades and hugs steep, curvy roadways. On straight and flat surface roads, the Explorer feels solidly planted and the cabin as serene as our outdoor surroundings.

We drive a Platinum model connected to a ski boat that dwarfs the vehicle, leaving only a couple hundred pounds to spare on the tow rating. Over a 12-mile (19-km) loop to a local boat ramp and back along a two-lane highway, the Explorer barely strains even while climbing a steep grade.

Finally, we select a hybrid model for some extended testing. A weekend family trip to the coast sees the fuel-saving SUV filled with kids, camping equipment and luggage for a 300-mile (483 km) road trip to assess space, comfort, performance and new technology.

It does not take long to appreciate how Ford engineers smartly integrated the hybrid’s liquid-cooled, lithium-ion battery into the chassis below the second-row seats to save every precious inch of cargo space.

The front seats are comfortable and supportive, while visibility from the driver's seat is unobstructed. The cabin feels spacious, thanks in part to a panoramic sunroof that generously spills in natural light. Legroom and headroom for front and second-row passengers is generous.

The Explorer’s maximum capacity is seven passengers since the third row accommodates two, rather than three. The Hybrid, with second-row captain’s chairs standard on most grades, seats six but a $495 option adds a second-row bench seat to stretch its carrying capacity to seven.

With just two teenagers in tow there is no need for the third row, so we fold those seats flat to create a cargo area with 87.8 cu.-ft. (2.4 cu.-m) of space. We use every inch.

The Explorer is loaded with technology to keep passengers informed, entertained and safe. Infotainment is accessed by an 8-in. (20-cm) landscape-oriented touchscreen standard on the base through Limited trims, while Platinum and ST are available with a 10.1-in. (25-cm) portrait-oriented screen.

After trying the larger screen on short drives, we prefer the standard screen. While we like the larger display’s full-screen map rendering, destinations took longer to load (Ford faults a pre-production software issue) and we find it less aesthetically integrated into the interior.

Regardless of screen size, the reskinned version of Ford’s Sync 3 infotainment system provides an intuitive way to operate everything from climate control to streaming music. Sync 3 also supports Apple CarPlay and Android Auto and can receive over-the-air software updates when connected to Wi-Fi. Clever placement of a wireless phone charger just below the center console neatly stows our device, and it sends a helpful visual alert to the dashboard display while charging.

The Explorer is available with conventional driver-assist technology, such as forward-collision warning with automatic emergency braking and blindspot warning, as well as more cutting-edge features like Evasive Steering Assist. Ford’s adaptive cruise control receives a new Speed Sign Recognition feature to adjust speed according to the posted limit. But it also permits override and the ability to set a tolerance of plus or minus 9 mph (14 km/h).

With heavy traffic back from the coast on a two-lane highway interspersed with passing lanes, the hybrid’s V-6 confidently got us ahead of the slowpokes before running out of lane. The 10-speed modular hybrid transmission shifts smoothly, whether stomping the pedal to pass or climbing slight hills on the highway. But at lower speeds, it hesitates and makes discernible, and somewhat disconcerting, harsh noises on several occasions.

We observe a combined fuel economy of around 23 mpg while driving 300-plus mostly highway but hilly miles. Ford hasn't revealed fuel economy ratings, but says the for the RWD '20 Explorer Hybrid has "an EPA-estimated driving range of at least 500 miles on a single tank of gas." Given the vehicle's 18-gallon gas tank, this calculates to around 28 mpg combined.

Despite a few shortcomings, the ’20 Explorer is poised to extend the model’s SUV sales streak. Only the Toyota Highlander offers an optional hybrid in the segment, and with 354,710 units sold in the first quarter of 2019 compared to 395,590 Explorers over the same period it's the closest competitor (and overdue for a redesign). With 342,108 units sold within the same timeframe, the Jeep Grand Cherokee is another close rival, although it lacks a third row. And the '20 Explorer's RWD powertrain and multiple engine options offer an alternative to front-wheel-drive, single-engine-option, three-row crossovers such as the Honda Pilot, Kia Telluride and Mazda CX-9 that buyers may cross-shopped.

With Explorer Platinum pushing $60,000, it competes with premium three-row SUVs from Acura, Lexus and Volvo. We bet it will give each of them a run for their money. 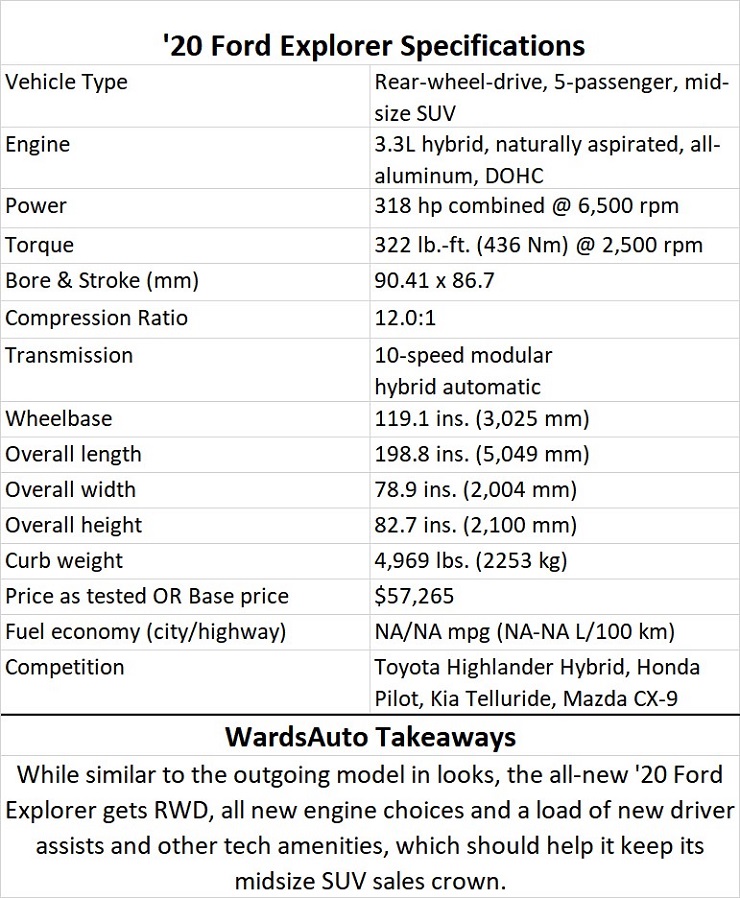