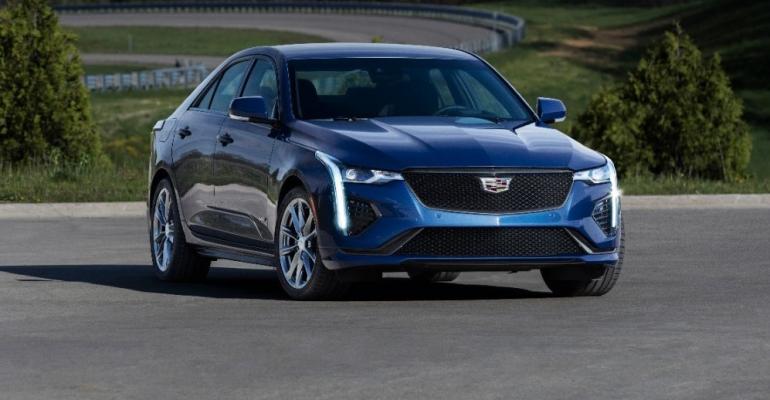 It’s a small car in a big way, from its sleek look and interior accoutrements to its high-output performance.

In 1982, General Motors’ luxury brand to much fanfare introduced the Cimarron compact. Yet, it shared the same so-so platform as the Chevrolet Cavalier, which cost half the price. Cimarron buyers had to pay extra for things like power windows. Really? Cadillac pulled the plug on that disappointment in 1988.

But the brand gets it right with its latest compact car go-around, the 2020 CT4, which hit the market this year.

It’s a small car in a big way, from its sleek look and interior accoutrements (yes, it comes with power windows – and more) to advanced powertrain and safety technology, to its agile driving dynamics. It punches above its weight.

The standard engine in the CT4 is a 2.0L twin-scroll turbo 4-cyl. Step up to the CT4-V, and the standard engine is a 2.7L dual-volute turbocharged I-4. The dual-volute setup directs exhaust flow through two separate passages, one atop the other, to the turbine housing, spinning it faster for near-instantaneous response. 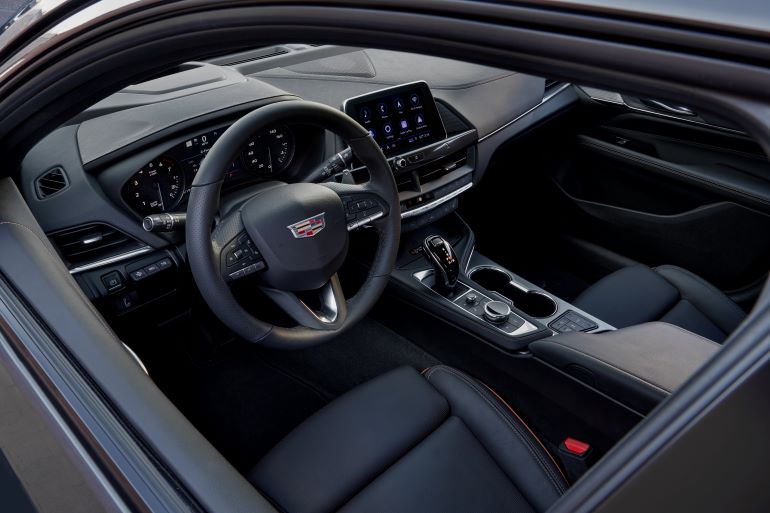 We test drove the 2.7L turbo-4 in the CT4-V all-wheel-drive model. It gets you places – fast. Furious is your option, one that may work best on a speedway after switching to the hunker-down track mode.

Taking cues from Cadillac’s racing DNA, the CT4-V’s high-output engine features a unique three-step sliding camshaft. That helps optimize performance at all speeds. The engine cranks out 325 hp and 381 lb.-ft. (517 Nm) of torque.

The 2.7T engine kicks out more horsepower and torque than the famed Cadillac Northstar V-8 of the past. Yet, the new one weighs 140 lbs. (63.5 kg) less. That was then, this is now. Back then, no one thought four cylinders could be so potent.

GM originally developed the engine as a clean-sheet design, using it first in the ’19 Chevrolet Silverado and GMC Sierra. A modern 4-cyl. arrives when it's in fullsize pickups.

But from the start, Cadillac says this engine was destined for its new compact sedan, too. Because of tuning and all, it’s not a truck engine plopped into a car.

Matched with a segment-exclusive new 10-speed transmission, the 2.7L provides rapid rpm build and crisp shifting on stretches of wide-open roadway from Detroit to Ann Arbor, MI, and back.

The CT4-V reaches peak torque at only 1,800 rpm. It stays there until 4,000 rpm, with a slight drop in the rpm band. Consequently, it responds and accelerates faster across the rpm range and holds gears at lower engine speeds. (Other high-revving, low-torque engines require downshifting, which takes extra time and can cause turbo lag during acceleration.)

The car shows its athleticism on curvy roads in and around Ann Arbor. The ride is comfortable, but you feel at one with the road, including one along Huron High School. It's across the street from the Huron River, and its sports teams are called the River Rats. (That’s what you get when the student body gets to pick the school moniker.)

The CT4 essentially replaces the slightly larger ATS that had a six-year run ending in 2019. It was a nice try in a tough market. The ATS competed with the BMW 3-Series and Mercedes-Benz C-Class. In a lower weight class, the CT4 goes up against the likes of the BMW 2-Series, Mercedes-Benz CLA and A-Class and Audi A3. The CT4-V runs against the Mercedes AMG A35 and AMG CLA 35, Audi S3 and BMW M235i Gran Coupe.

Less expensive than the ATS, the CT4 is priced to draw young upscale automotive consumers who may not know about the one-time power and glory of Cadillac as America's No. 1 premium brand before BMW and Mercedes got serious in the U.S. Until the CT4 joined the lineup, the CT5 sedan had been the least-expensive Cadillac, starting at $36,895. The CT4 base price with rear-wheel drive and the 2.0L engine is $33,990. The Audi A3 and Mercedes A-Class start around there, but Cadillac says it offers more for the money.

The MSRP for the rear-wheel-drive CT4-V with the more powerful engine and all that goes with it starts at $45,490. Add $1,100 for AWD. General Motors' Spring Hill, TN, plant builds the 2.7L engine. GM's Lansing, MI, factory assembles the vehicle. 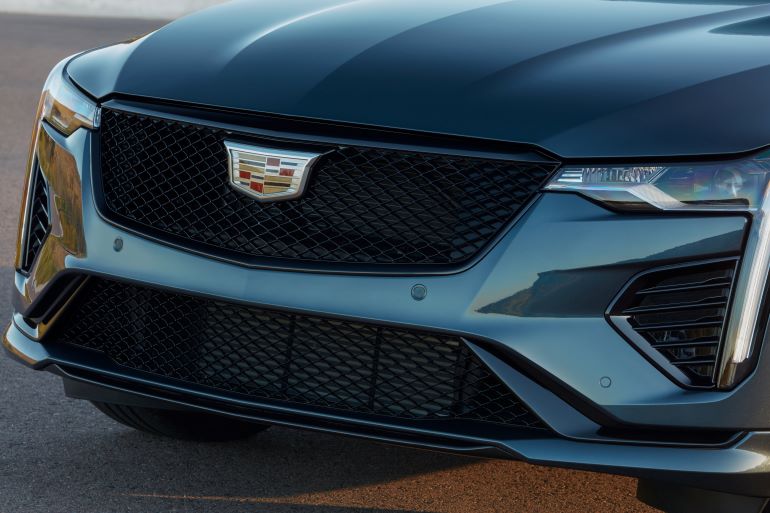 Bright accents, along with unique grilles (with premium hot foil-stampings on the grille elements) and fascias distinguish the CT4 Luxury and Premium Luxury models.

The Sport and V-Series models are differentiated by darker accents and performance-inspired details. Those include mesh grilles, quad exhaust tips, performance-design wheels and a rear spoiler designed to reduce rear lift while increasing the back tires’ grip.

In designing the inside, Cadillac had its eye on a new generation of luxury sport sedan customers. Consequently, the interior takes on almost a sculpted look. Details wrap around a driver-centric cockpit.

Controls are ergonomic and intuitive with a sense of tactility. Metal accents throughout offer a nice touch.

A high-definition, 8-in. (20-cm) diagonal touchscreen is the focal point for the CT4’s connectivity. It is integrated prominently in the center of the instrument panel.

Standard technology includes high-definition rear-vision camera, front-collision alert and pedestrian braking, and safety alert signals that vibrate on the driver seat and show up on a windshield display.

With the cross-lane visual alert, a screen arrow even points in which direction an approaching vehicle is coming from as you are trying to back up with limited visibility. The car backup camera's panorama range is wide enough to show a vehicle approaching even though it is several feet away. Parking between two big SUVs creates major blindspots. The cross-lane alert solves that problem and prevents accidents. It's an under-rated safety feature. 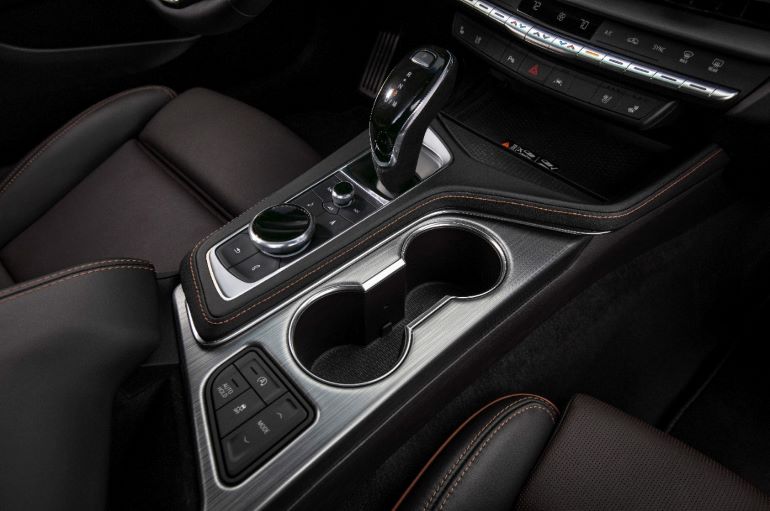 Tour, Sport, Snow/Ice and Track are standard on the CT4. The V-Series includes a new My Mode and V Mode, which can alter the calibrations for transmission shifting, suspension, steering and brake feel, front/rear torque split with AWD and vehicle-sound characteristics.

Cadillac will offer its Super Cruise driver-assistance technology on the CT4 later this year. The Level 2+ system enables customers to drive hands-free on an expanded range of more than 200,000 miles (321,868 km) of compatible highways in the U.S. and Canada, using lidar map data, high-precision GPS, a state-of-the-art driver attention system and a network of camera and radar sensors.

Not intended at this point in development as a fully self-driven system, Super Cruise helps keep drivers engaged by detecting and then signaling when they need to pay more attention to the road. 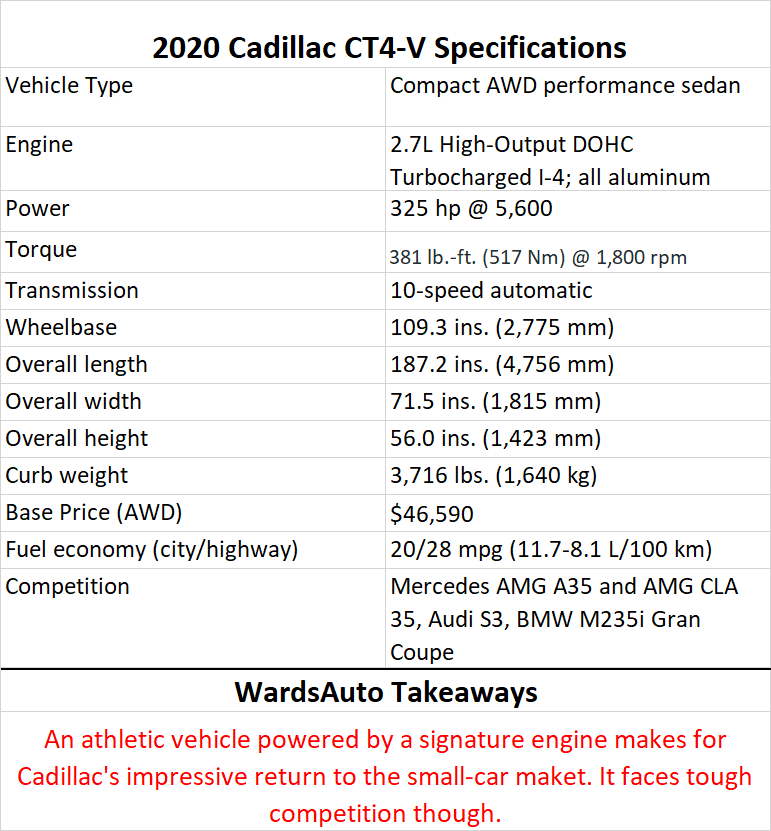