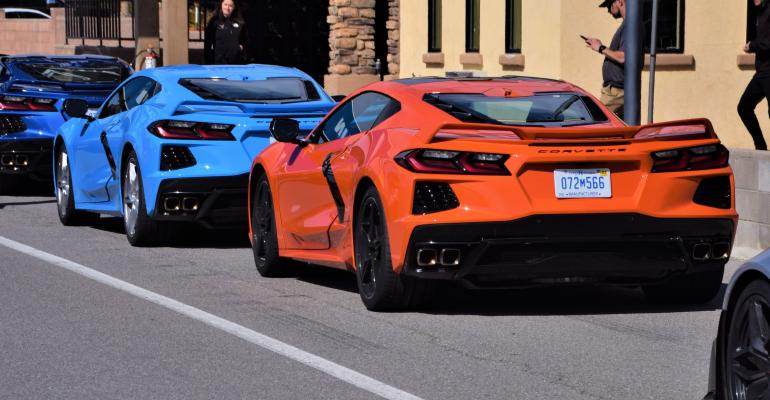 It took 14 years of development work – and decades of wishful thinking – but filling the back end of the eighth-generation Chevy Stingray with an award-winning small-block V-8 makes for magnificent handling.

LAS VEGAS – Hypothetically speaking, if a veteran automotive journalist and skilled driver dials up 142 mph (229 km/h) on an arrow-straight two-lane through the desert with no other traffic, is it OK for the passenger to let out a gasp when approaching a hill that could send the car airborne? Hypothetically speaking.

The passenger is here to tell you everything worked out fine because the driver jabbed the brake pedal a split second before reaching the hill, settling the chassis and keeping four wheels on the ground.

Credit goes to the car: the all-new eighth-generation ’20 Chevrolet Corvette Stingray that for the first time places the engine behind the seats. It took 14 years of development to bring this transformative architecture to fruition.

The car’s center of gravity is actually 0.6 ins. (15 mm) higher and moves rearward more than a foot compared with the prior-generation front-engine Corvette, which explains why the new C8 has a stubby front end (and frunk) and longer tail, with the front wheels pushed closer to the driver.

From the driver’s seat, the decision to go mid-engine with the direct-injected 6.2L small-block V-8 was absolutely the right one, as it effectively eliminates the propensity to oversteer that had defined the handling characteristics of generations of Corvettes. 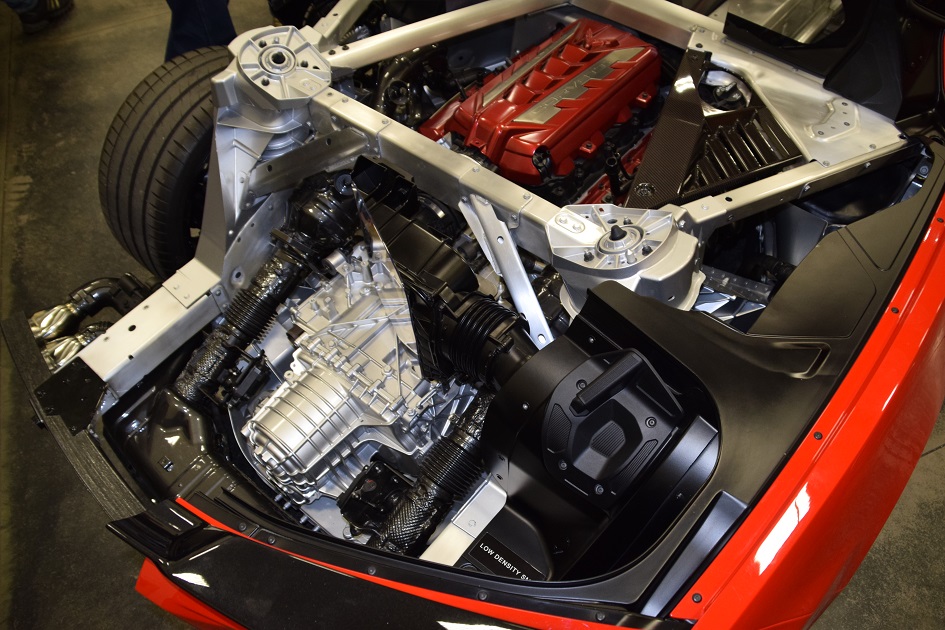 C8 Corvette cutaway back end, with engine in front of rear axles and transmission behind.

The weight is now 60% biased to the rear, which keeps the car infinitely more stable going hard into corners and coming out. The road course at the Spring Mountain Motorsports Ranch here is an ideal venue for demonstrating the C8’s many fine attributes.

Previous Corvettes tended to be nose-heavy and required the driver to closely manage the back end during aggressive maneuvers. The C8 is much simpler to drive: Point it in the intended direction and lay on the throttle. It steers with precision, and the new weight balance makes for ideal braking, keeping the car much flatter and in control.

Anyone lucky enough to climb behind the wheel becomes a better driver and feels more confident in pushing the car harder than may seem prudent.

Away from the track and on the highway, the Corvette becomes an ideal cruiser, easily topping 20 mpg (11.8 L/100 km) during our test drive. Most shocking to driver and passenger is how much quieter the C8’s cabin is on the highway than the C7.

There’s never been a Corvette that puts a thumping V-8 so ridiculously close to the ear and driver’s backside, and yet uneducated drivers would assume the engine’s in the same place, up front, under the hood, based on the limousine-like tonal qualities of the new Vette.

Credit goes to double-pane glass and the amply insulated firewall between the cabin and engine bay.

The front of the engine is so close to the firewall that mechanics some years from now having to change the accessory belts or timing chain will be cursing the design engineers because they left no room to pull out the old belts or install the new ones.

The car will have to be hoisted so the mechanic can crawl underneath. Then the engine (in front of the rear axle) and the differential and 8-speed dual-clutch transmission (extending behind the rear axle) will have to be unbolted as a unit and lowered from the chassis far enough for mechanics to access the belts, GM engineers confirm. 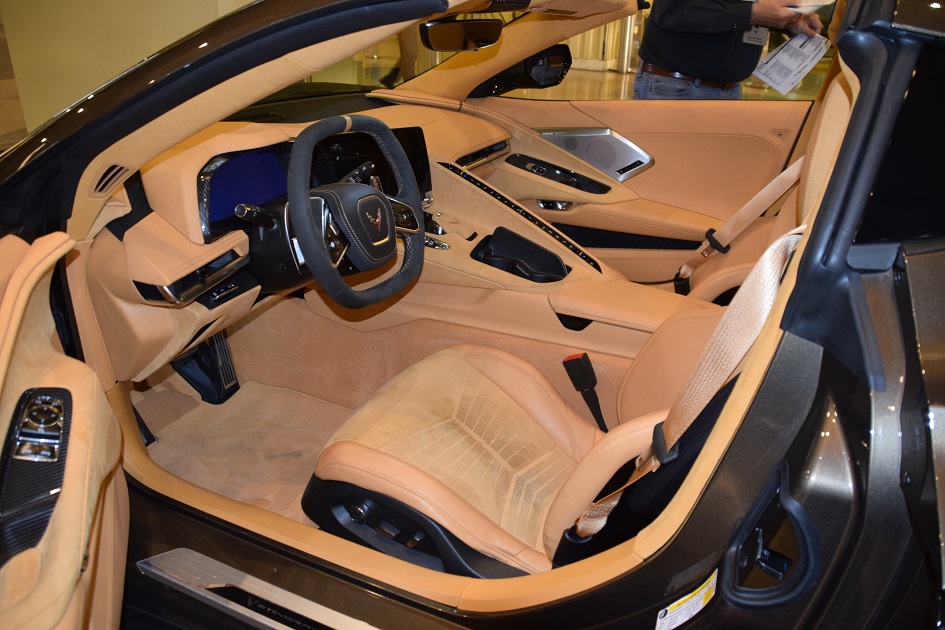 Purists moan about the lack of a manual transmission, but the DCT is just plain better, popping off gearshifts in less than 100 milliseconds. Paddle shifters accommodate those who want to row through gears manually.

A tightly wound autocross track set up here at Spring Mountain demonstrates precisely why the DCT is ideally suited for the C8 Corvette. The track is loads of fun in manual mode, staying mostly in second gear the whole way.

But, at the advice of track handlers, several passes in automatic mode were even more thrilling, as lightning-quick shifts get us from first to second, then third, at just the right time – even allowing dalliances with the 6,600-rpm redline. The more throttle applied, the longer a gear will be held before an upshift. This is one intelligent transmission. 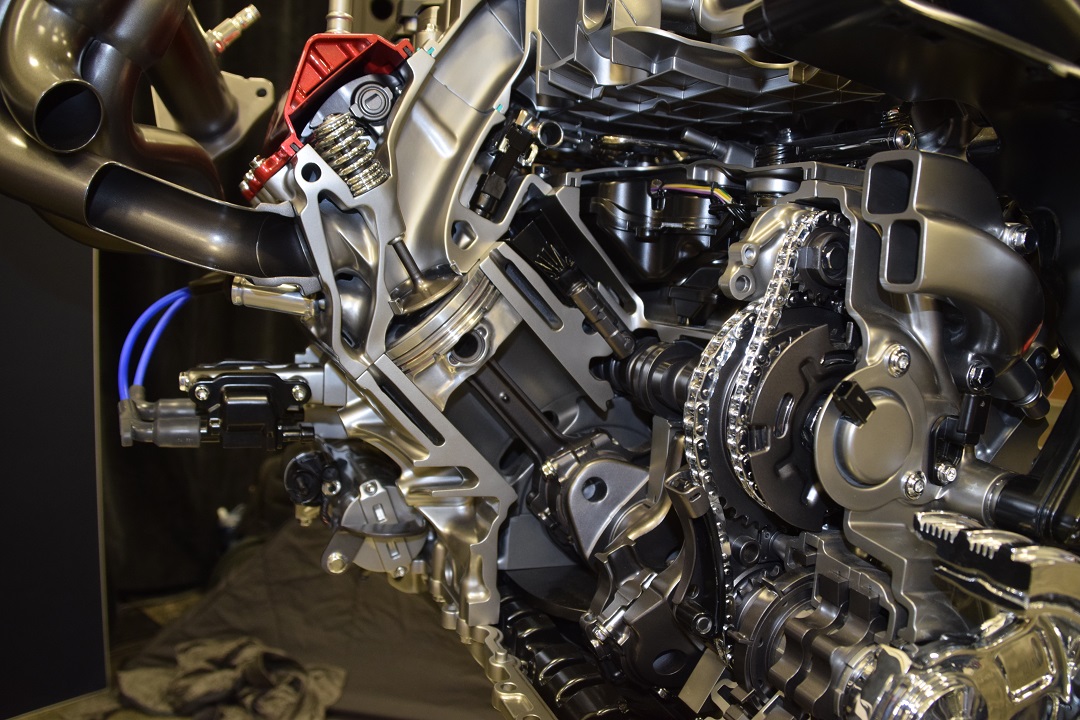 What’s not to love about the C8 Corvette?

There is one complaint: rearward visibility. With a low roofline and the need to see over a big V-8, a standard rear-view mirror provides little visual clarity.

So a rearview camera mirror is available that allows the driver to see everything behind the car. If you’re in the middle of three lanes, this wide-angle feature will show you trailing vehicles in all three lanes, in high definition.

That sounds like a great feature, and it’s truly an asset in General Motors’ fullsize pickup trucks. But in the Corvette, with the mirror much closer to the driver’s face, this view can be jarring, difficult to process and even make you a little queasy. It takes getting used to.

Bottom line is the C8 is a near-exotic coupe (and convertible) with sexy lines, an outstanding drivetrain, first-rate ride and handling, a greatly improved interior and a starting price of about $60,000.

That’s a fraction of the cost of any other mid-engine sports car on the market.