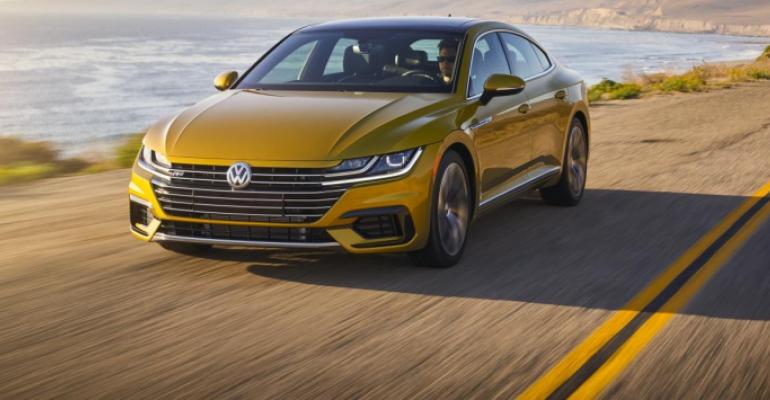 VW’s newest model has an eye-grabbing exterior, a minimalist, uncluttered interior, athletic handling and loads of rear-seat and cargo room, but it stumbles on technology and materials.

SOLVANG, CA – Given declining sales of cars in the U.S., it’s rare for a new nameplate to be introduced. But ever the one to buck convention, Volkswagen is doing just that, with the new Arteon 4-door coupe-styled sedan-cum-hatchback arriving at its U.S. dealerships now.

VW is aware the going will be tough, but it sees the Arteon as a flagship of sorts – a styling statement that will draw buyers into showrooms even if they intend to purchase other sedans or CUVs.

Plus, the car is finally here after a delay (VW says homologation issues were the culprit, rumors blame money diverted from Arteon R&D to the Dieselgate fallout), so why not offer it everywhere possible to make a return on VW’s investment?

After more than 100 miles (161 km) behind the wheel of an Arteon SEL Premium grade here near Santa Barbara, we come away impressed with its looks, but also its performance and roomy, serene interior.

Our SEL Premium stickered at $45,940 including a $995 destination and handling charge. There were no options as this high-end grade gets a full suite of advanced-driver-assist systems (ADAS), including adaptive cruise control with stop and go and lane-keeping with lane assist, plus heated and ventilated front seats and Nappa leather.

The eye-grabbing Arteon fills the void left by the Volkswagen CC. Its numerous character lines – running nose to tail – plus its clamshell hood and standard LED headlights that blend perfectly into the car’s horizontal-bar grille – create great on-road presence. Adding to the wow factor is our test car’s Kurkuma Yellow metallic paint, a no-charge upgrade.

Given its low-and-wide stance, standard adaptive dampers, plus optional 4Motion all-wheel drive (able to send up to 50% of torque to the rear), our Arteon is the perfect vehicle for zig-zagging up and down California’s serpentine State Route 33 north of Ojai. It isn’t as toss-able as the smaller, lighter Golf, but it still reveals cat-like reflexes in its composure.

We aren’t crazy about the “variable assistance” electro-mechanical steering system, which errs high-ratio (requiring bigger inputs) at lower speeds. Thankfully, it is low-ratio at higher speeds, lessening arm strain. The light steering feel also isn’t our cup of tea, although it firms up somewhat in Sport mode.

The Arteon is offered with only one powertrain in the U.S.: a 2.0L turbocharged DOHC direct-injected gasoline 4-cyl. from the Golf R coupled with an 8-speed automatic by Aisin.

The Aisin 8-speed auto shifts cleanly and unnoticeably, while the car’s standard stop/start technology was 99% unobtrusive. At the start of our journey, the engine once was slow to restart, pulling away from a light in downtown Solvang and causing an acceleration lag.

VW’s simple, clean interiors are a refreshing contrast to busier, fussier cabins. The Arteon’s instrument panel has typical German practicality, being wide and straight across. Decorative stitching and perforation on seats similarly is no-nonsense – a wide, upside down U-pattern. 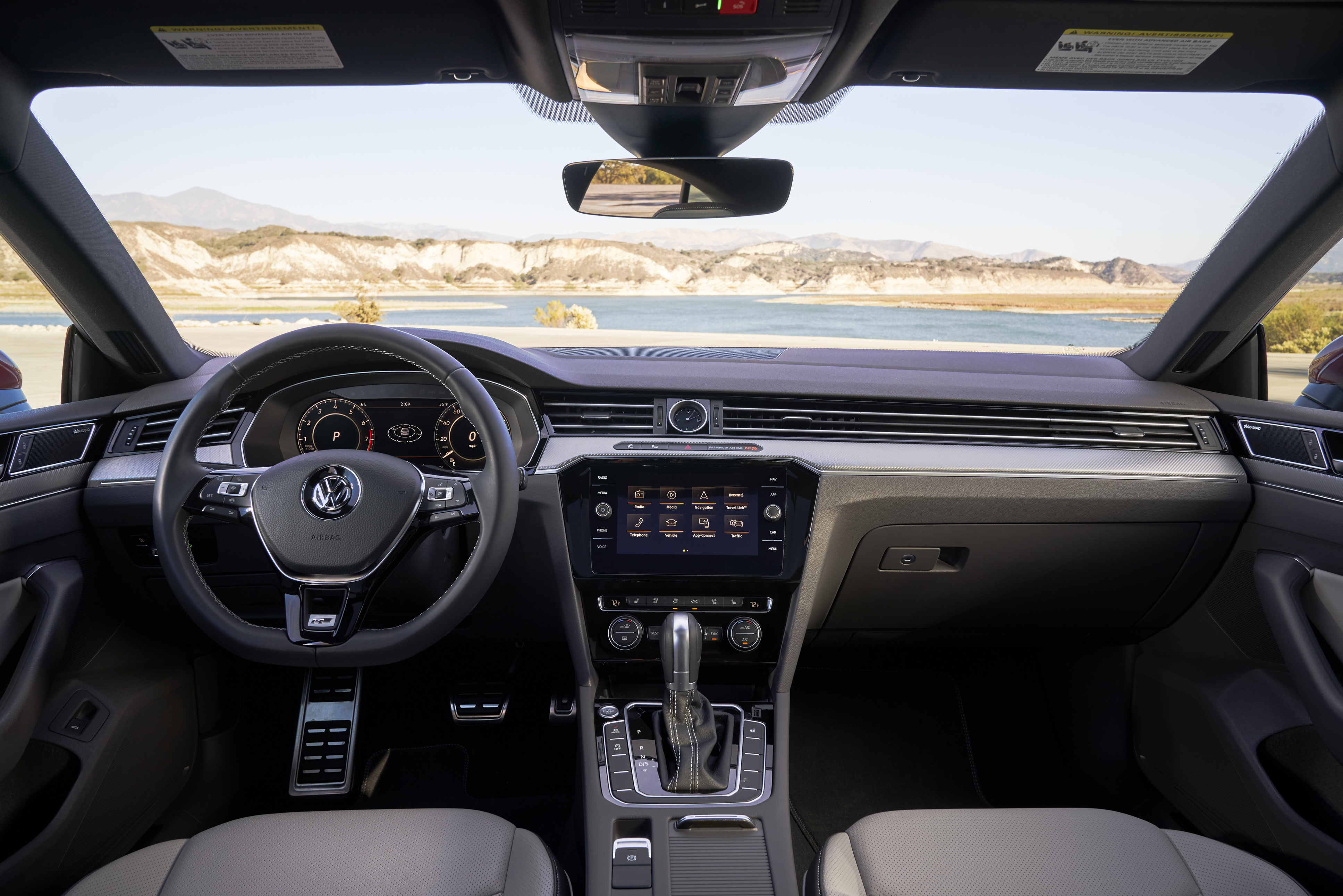 Overall, the cabin is reflective of current VW interiors. That’s good, because the design is unpretentious and ergonomic but bad, because there are some cheaper-looking elements inside that don’t befit a $35,000-$45,000 vehicle.

For instance, the black hard-plastic lower door trim has an orange-peel-like appearance.

Fit-and-finish is VW-typically good, as is attention to detail. All pillars are wrapped with the headliner’s circular-knit material.

The Arteon, based on VW’s modular front-engine, front-wheel-drive MQB platform shared with the Golf, Jetta and Passat, is 2 ins. (51 mm) longer than the Passat but boasts a 5-in. (127-mm) longer wheelbase. This gives it a cavernous backseat to fit this 5-ft.-8 reviewer, even with front seats set all the way rearward.

As mentioned, it is really a hatchback, not a sedan, so its cargo area is not only wide but quite deep. VW says it has double the volume of the Passat’s trunk, and tops the Kia Stinger and Toyota Avalon’s trunks.

The 8-in. (20-cm) infotainment touchscreen and 12.3-in. (31-cm) digital gauge cluster in the SEL Premium have good resolution and menus are well organized. Physical switchgear consists of small knobs but large buttons.

That’s all good, because relying on voice-recognition technology will have you pulling your hair out. The Arteon’s system fails to recognize about 75% of SiriusXM station names, and stumbles on “navigation.”

We test the SEL Premium’s standard ACC, but it either has a lot of leeway or is malfunctioning in our test vehicle, as we get too close for comfort approaching vehicles, even on the farthest following setting. Near the end of our drive, and on slow city streets, it recognizes a car ahead at a stop sign and brakes accordingly. As always, extreme attention should be paid by the driver when using any ADAS technology.

The lane-keeping indicator light in the gauge cluster often is orange, not green, indicating no recognition of lane lines, a frequent issue for many LKAS systems usually due to poorly painted lines.

The Arteon is roomy, comfortable, stylish and fun-to-drive, but could use a materials upgrade and some technology tweaking.

Its closest competitor seems to be the less-expensive Kia Stinger, another coupe-styled, 4-door hatch. However, CarsDirect reports VW has just tacked on a $2,500 incentive, bringing the Arteon’s starting price down to $33,345 for a FWD SE grade and closer to the Stinger 2.0T’s intro price of $32,990.

That’s a good strategy and should help VW move the metal. Stinger sales were down roughly 1,000 units through April to 4,166, showing volume is very modest in the sector. 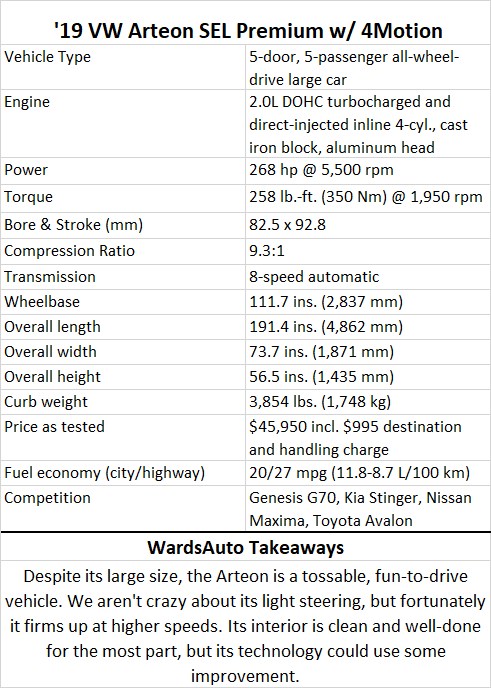