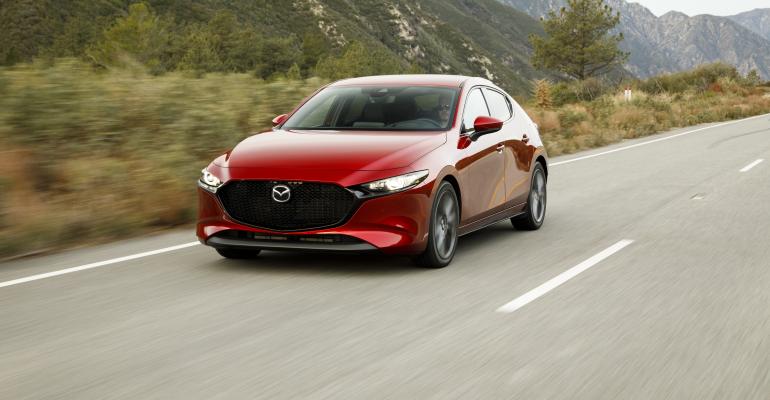 Despite some issues, the new Mazda3 is a great update to an already good compact car. With the domestic brands exiting the C-car segment in the U.S., Mazda is bound to pick up some share.

OLYMPIC VALLEY, CA – Mazda doesn’t sell as many Mazda3s as Honda does Civics or Toyota does Corollas, but it’s not for lack of trying.

Chalk up the new ’19 Mazda3 as another winner and deserving of the hundreds of thousands of sales those models tally.

The 3 compact hatch and sedan, on sale now in the U.S., as always are fun-to-drive and beautiful to look at inside and out. But Mazda has spent some time to improve its human-machine interfaces, albeit with mixed results (more on that later), plus added optional all-wheel drive.

Carried over, with some updating, is the prior-generation Mazda3’s Skyactiv-G 2.5L naturally aspirated 4-cyl., making 186 hp at 6,000 rpm and 186 lb.-ft. (252 Nm) of torque at 4,000 rpm, both figures up slightly from ’18. (One of the updates is standard cylinder deactivation on the hatch and already found on the same engine in the CX-5 CUV and Mazda6 midsize sedan).

Many reviewers gripe the car is underpowered – and it does exhibit delayed acceleration climbing steep mountain roads on a drive from Lake Tahoe to Sacramento. But Wards is able to get into a Mazda3 in Detroit, and on flatter roads it is plenty peppy. Merging onto freeways and passing slow-moving traffic is a relative breeze, with virtually no delayed acceleration. Should you live in a hillier area, activating sport mode does quicken acceleration.

Mazda fans are hoping the automaker will bring its much-talked-about 4-cyl. Skyactiv-D (diesel) and Skyactiv-X (spark-controlled compression ignition) engines to the U.S., but officials here give the impression that won’t happen anytime soon, noting they were designed to meet stringent European emissions regulations.

The Skyactiv-D and X engines in the European Mazda3 actually achieve lower output per media reports, although the D (predictably for a turbodiesel) hits its torque peak sooner.

Being a Mazda, ride and handling are strong points for the new compact hatch and sedan. The Mazda3’s switch from a multilink to a torsion-beam rear suspension is not a mistake, at least per our well-dampened-but-lively drives. The automaker says a torsion beam is simpler due to fewer bushings and can more easily marry good ride quality with improved responsiveness vs. a multilink design.

AWD is a rare feature in the U.S. C-car segment, with only the Subaru Impreza and niche Ford Focus RS offering it. A test course, set up on a snow-covered golf course at a resort here, is too slow (parking lot speeds) to discern much difference between front-wheel-drive and AWD variants.

We do notice more sliding in a short lane-change course when the car’s standard G-vectoring control software (introduced in the prior-gen Mazda3 and which provides engine braking and shifts weight to the front) is turned off.

We test the adaptive cruise control and lane-keep assist, both options, during our California drive and have mixed results.

ACC works well, slowing and accelerating us at a natural pace, much like a cautious human driver.

However, the lane-departure feature of LKAS doesn’t warn us until we are over lane lines; intervention to pull us back into our lane is sporadic. A Mazda official says a steering wheel sensor is to blame for the latter – if a hand is sensed on the wheel it figures the driver is in control.

As the Mazda3 rides on an all-new platform, the cramped backseat is surprising and disappointing. Spec sheets confirm both the Corolla and Civic have more room in their second rows for heads and legs.

Even with average-size occupants in the front row, backseat riders in the Mazda3 must tuck feet under the front seats of our hatch tester; another reviewer’s knees press up against the back of the passenger seat. The saving grace is many C-car owners are singletons and may never or rarely have passengers back there.

Our biggest gripe is it isn’t easy to change a SiriusXM station. Three sets of controls (two physical and one virtual) all function as rewind and forward, not station seek, for SiriusXM live (basically a DVR-type feature) present in all three of our test vehicles. It wouldn’t be so bad if a station list accessed via the controller would stay on the screen, as in BMWs, but the list quickly disappears.

Another Wards editor is frustrated by the back button taking him home, not back one page, when he wants to choose another song in his playlist.

Hopefully some simple software updates can solve these issues soon.

We agree with Mazda that a controller knob is better than a touchscreen, avoiding the sometimes-long reach associated with the latter and keeping a driver in their lane (the automaker says many people inadvertently apply torque to the steering wheel when reaching for a touchscreen).

The genuine head-up display now available in the car is great, replacing a cheap-looking plastic lens affixed above the instrument panel in the previous generation. The HUD and all displays, including the gauge-cluster display, have crisp, clean fonts and some vivid color.

The interior of the Mazda3 is attractive and stylish, with soft, flowing shapes and lots of unadorned, open spaces.

Two test cars have a Mazda-traditional ivory-and-black leather interior, while the hatch has a red leather -interior new for ’19. A cloth is available in the base-grade sedan, while a leatherette material is on Preferred grades of the hatch and sedan.

All Mazda3s have real aluminum trim, including on front-door speaker grates. The automaker notes it worked closely with Bose to shift subwoofers from the lower front doors to near the footwells as doors generally are poor conductors of sound.

Despite some issues, the new Mazda3 is a great update to an already good compact car. 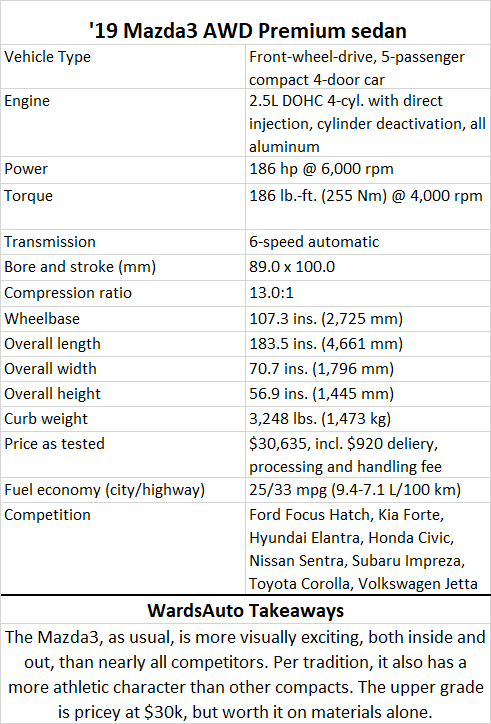 All compacts have pluses and minuses, but the 3 should please those wanting a driver’s car and who appreciate higher-quality interior materials.

With the domestic brands exiting the C-car segment in the U.S., Mazda is bound to pick up some share.