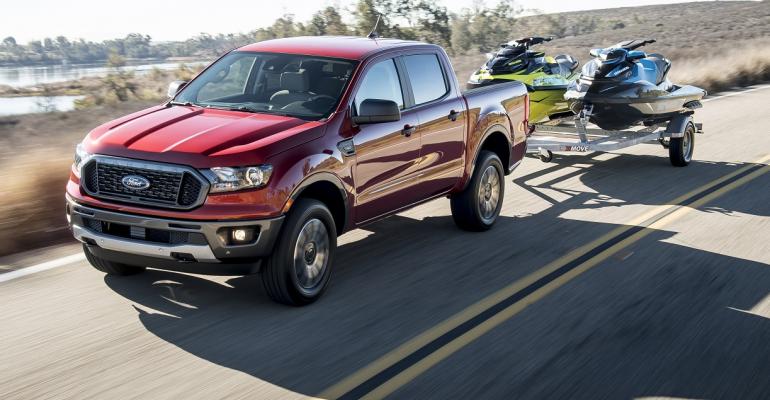 '19 Ford Ranger on sale in January in U.S.
Vehicles>Test Drives

The long-awaited return of Ford’s smallest pickup finds the Ranger offering something different than the competition, namely the segment-leading Tacoma. And that’s a good thing.

LA JOLLA, CA – After exiting the U.S. market in 2012, when the aged second-gen U.S. model’s share fell to a mere 7% of Wards Small Pickup segment, the Ford Ranger returns this month.

And the Blue Oval brand hopes to win back those who may have flocked to other models during the truck’s hiatus, namely the Toyota Tacoma.

The Tacoma is the No.1-selling small pickup in the U.S. with nearly 50% market share in 2018 and where most Ranger owners have migrated, Ford says.

Although brought to you by the makers of the brawny F-Series lineup, the new 2019 Ranger is less a traditional truck (balky, jarring) and more utility vehicle. It’s maneuverable, relatively quiet, quick off the line and has a comfortable ride more like the Honda Ridgeline midsize pickup than the Tacoma, which per our test drives here feels brutish.

That isn’t to say the Ranger isn’t capable. Unlike the unibody Ridgeline it has body-on-frame construction (a fully boxed frame with six hydroformed, through-welded crossmembers) and also a hitch platform with a through-welded receiver tube, front tow hooks and frame-mounted front steel bumper.

Ford says it put the Ranger through the same sort of “torture testing” it did the current F-150 large pickup.

We get a mild version of that through an off-road course set up on a ranch near Lake Cuyamaca in eastern San Diego County. A ’19 Ranger Lariat with the FX4 package is impressive, going easily in, out and through mud puddles and deep ruts, and also clinging at a 25-degree angle sideways on an embankment.

The new Ranger has a variety of technologies (a terrain management system, locking rear differential to increase traction and grip), many in the optional FX4 package, to please the serious off-roader.

Terrain management, activated via a button in the middle of the 2WD high/4WD high/4WD low dial on the center console, cycles a driver through four modes (sand, normal, grass/gravel/snow and mud/ruts) that change gear ratios, throttle tip-in and adjust stability-control-system settings.

Beyond the off-road course, we test drive on-road here last month a couple varieties of the new Ranger, as well as a Tacoma TRD Pro 4x4 for comparison, and find all above average.

Unlike competitors offering 4- and 6-cyl. engines, including the Tacoma, as well as the Chevy Colorado and GMC Canyon, Ford opted for one engine balancing fuel economy with output: a 270-hp version of its 2.3L EcoBoost direct-injected and turbocharged I-4 from the Mustang and Explorer, mated to Ford’s 10-speed automatic.

That robust torque is apparent as the Ranger with its turbo-4 moves quickly off the line compared to the slower Tacoma. The Tacoma’s 3.5L V-6’s peak torque is a mere 265 lb.-ft. (359 Nm).

What’s more, there is little engine noise or vibration that penetrates the Ranger’s cabin; the same can’t be said for the Tacoma, at least in this trim.

We do note some annoying wind noise driving a Ranger XLT on the highway with windows closed.

Another of our few complaints on the Ranger is its high-ratio steering, which feels very light at lower speeds. It’s preferable to the Tacoma’s heavier steering, but zig-zagging a Ranger through 25-mph (40-km/h) rural roads results in tired, tense arms as we make big inputs with little resistance in the wheel. The problem dissipates at higher speeds.

The ’19 Ranger, based on the global sixth-gen Ranger developed by the Aussies in 2011, benefits from extensive efforts to reduce mass. Virtually all major powertrain components are aluminum as are the hood, front fenders and tailgate.

“Underneath the vehicle we have gone to parabolic leaf springs,” Ranger Chief Engineer Rick Bolt tells Wards of a weight-saving measure made to the Hotchkiss-type non-independent live rear suspension. The front suspension employs a forged aluminum knuckle.

The Ranger advances on the now-three-year-old Tacoma with more infotainment features, including Apple CarPlay and Android Auto, Waze integration for iPhones as well as Alexa Skill and a WiFi hotspot.

While both offer a hefty suite of advanced-driver-assistance systems, the Ranger delivers forward sensing, rear sensing and trailer coverage with its blindspot information system.

We use the Ranger’s adaptive cruise control largely on the highway and find it safely keeps pace with traffic ahead. However, on a curving surface road approaching a red light, our Ranger speeds up briefly as we are pointed away from the vehicle ahead. This is a common problem when using ACC on curvy roads and a good reason for drivers to always pay attention and be ready to intervene when using any ADAS technology.

Ford’s infotainment system, with the latest version of Sync, is very good thanks to a big, bright display screen (standard on XLT and Lariat – the XL gets a smaller screen) and fast response times to touch and voice inputs.

Trying a variety of voice-recognition commands in a couple different Rangers results in quick answers to radio channel requests (“Tom Petty Radio”) and nearby businesses (“find nearest Starbucks”). Unlike many similar systems, to bring up SiriusXM channels only the name is required to be spoken, not “play” or “tune to” or the word “Sirius” for that matter.

As one of the first out of the gate with touchscreen-based menus, Ford’s Sync system is very good. However, we do prefer hard buttons for heated seats (the Ranger’s are accessed via the touchscreen) and we never did find a way to adjust the volume of given directions on our route.

The Ranger’s interior decorative materials vary from basic matte plastic (XL) to painted silver plastic (XLT) to glossy gray plastic (Lariat). The XL and XLT have hard-plastic instrument panels while the Lariat comes with a leather-stitched IP topper to match its seats.

All interiors here are ebony, but a beige/gray stone color is an option. Circular-knit fabric adorns the headliner and pillar trim.

Cupholders are nice and deep in both front and back seats, with the front cupholders having three retractable hard nubs and rubber floors and the back cupholders completely rubberized.

Barring a seam felt on the steering wheel in the base XL grade, there are no fit-and-finish issues found in Rangers here.

Head to head, the Tacoma and Ranger interiors are a wash. Both have lots of hard plastic, with touches of pizzazz in higher trim levels.

We squeeze in back of a Ranger SuperCab with half doors to confirm that yes, this space only is for stuff and maybe small children and dogs. The 4-door SuperCrew has lots of legroom and supportive seats in both front and back rows. There is no two-door cab in the U.S.

The ’19 Tacoma is more expensive, from $25,550-$45,365, but pickup pricing is so variable given incentives that both sets of figures likely can be negotiated down.

Despite the Tacoma’s overwhelming success, the Ranger has a very good chance of winning over some small-pickup buyers with an ideal mix of capability and crossover-like comfort, not to mention the brand equity inherent in the name. Ford sold a total of 6.68 million Rangers in the U.S. from 1982 through 2012, Wards Intelligence data shows. That’s nothing to sneeze at.

The Ranger, being assembled at Ford’s Michigan Assembly Plant in Wayne, MI, goes on sale this month at U.S. dealers.