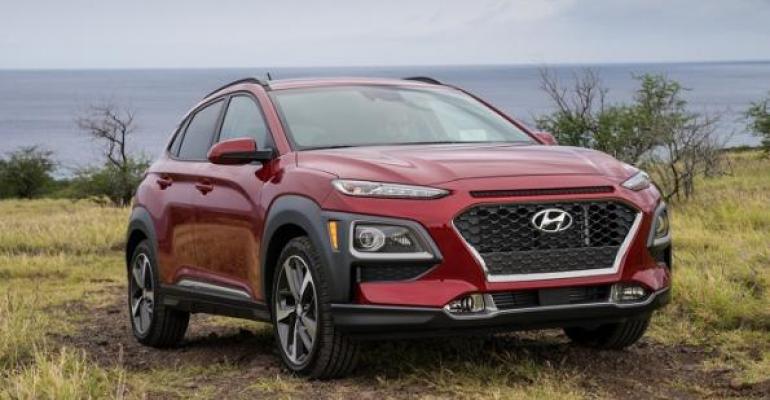 The Korean automaker smartly took its time to develop a U.S.-specific vehicle with the Kona and pays off with expressive styling, a superb level of available content, buttoned-up driving dynamics and pricing that does not break the bank.

WAIMEA, HI – In an ever-widening sea of small CUVs, the all-new ’18 Hyundai Kona stands out like a signal fire.

Arriving at U.S. dealers in the coming weeks, the adventure-minded Kona drops into one of the fastest-growing corners of the red-hot CUV segment where sales last year nearly reached 1 million units and no fewer than 20 entries compete, with more on the way.

To say Hyundai is striking while the iron is hot would be an understatement.

And while the Korean automaker trails competitors such as General Motors, Toyota, Honda and Nissan with an entry in the segment, Hyundai smartly took its time to develop a U.S.-specific vehicle with the Kona. It is no warmed-over emerging-markets product, and such diligence pays off handsomely through expressive styling, a superb level of available content, buttoned-up driving dynamics and pricing that does not break the bank.

On an island where ancient Polynesian warriors once battled, the Kona captures their spirit here with a look that is both ready to defend and attack. In fact, Hyundai chief designer Chris Chapman, who joined the automaker a handful of years ago from BMW’s DesignworksUSA, says his team drew inspiration for the Kona’s aggressive front end from the helmets of another grand army – the Spartans of Greece.

The Kona’s cascading mesh grille emulates the nose of a Spartan’s headshield, while lower headlamps wrapped in sheet metal and cladding protect the sides of the face. Signature LED running lights are the screwed-up eyes of an attacker, but also subtly hint of the Kona’s various exterior and interior technologies.

More so-called armor cladding serves as brush guards over the wheel wells and along the exterior sills and lower front and rear fascia. A low, wide stance combines with impossibly short front and rear overhangs to give the Kona the stance of a crouching warrior, while a crease running the length of its profile over the door handles may suggest a drawn spear.

Additional armor connects the Kona’s flanks with its rear, marrying up nicely with a body-colored spoiler containing an integrated center-mounted brake light. Like the front end of the vehicle, the Kona rear light work is separately configured between slim, upper brake lights and reverse lamps.

Critics may assail the exterior as overproduced, which Hyundai has been guilty of in the past. But in the case of the Kona, it makes a bold statement in a segment chock full of milquetoast designs.

Given the drama outside the vehicle, it would have been thrilling if Hyundai had pushed the prevailing trend inside, too. The cabin is not a disappointment, but a splash of color beyond the lime stitching, ventilation and gear shifter surrounds available on cars with the matching exterior color would have sent the Kona over the top.

Perhaps the stunningly colorful Hawaii fauna, visible at every turn from inside the Kona’s mostly grey and black interior, is to blame. Whatever the case, Hyundai staffers here hint more vibrant treatments for the cabin may lie ahead.

An unfortunate pair of long scratches down the lower inner panel of the driver’s door was a blemish on one test car. It could be forgiven if it didn’t illustrate the risk of using a higher grade of plastic that looks better than the hard stuff but comes at the expense of durability.

Seats are sufficiently comfortable for an extended stay behind the wheel, and the interior feels spacious despite its diminutive dimensions. The HVAC system is refreshingly simple to operate and redundant steering wheel controls are intuitive and logically placed. An 8-in. (20-cm) floating touchscreen is standard on Ultimate models and easy to use. Limited SEL and SE trim levels receive a 7-in. (18-cm) touchscreen, but Apple CarPlay and Android Auto are standard across the range.

Rear legroom is rather tight, owed to the fact the Kona is among the shortest entries in the segment, but clever powertrain and suspension packaging puts it among the leaders in rear cargo space. Second-row seats are a 60/40 split and fold relatively flat to slide adventure in and out. An array of bins under the cargo floor provides hidden space to stow smaller items.

Motivation for Limited and Unlimited Kona models comes via Hyundai’s turbocharged Gamma 1.6L inline 4-cyl. with gasoline direct injection, a unit making a peak 175 hp at 5,000 rpm and a grin-inducing 195 lb.-ft. (264 Nm) of torque from as little as 1,500 rpm through 4,500 revolutions.

The turbo Kona eagerly tackles ever-changing grades on the Big Island. Along a stretch of the Kohala Mountain Road, the Kona’s torquey little engine combined with its responsive 7-speed EcoShift dual-clutch transmission to impressively take down 19.3 miles (31.1 km) of switchbacks from sea level to 3,500 ft. (1,067 m). Confidence-inspiring all-wheel drive with brake-induced torque vectoring eases nerves on a rain-soaked drive down the other side.

There is some tire and wind noise but it’s not entirely overwhelming.

The sprint over the mountain also demonstrates the Kona’s buttoned-up chassis, with the MacPherson front design and dual-arm multi-link rear setup striking a balance between ride comfort and sure-footedness. The Hyundai Mobis-sourced electric-power steering system also shines. Its combination of responsiveness, weight and on-center feel ranks among the best Hyundai has fielded.

Models tested here included Drive Mode Select. In Sport mode the emphasis is on quicker acceleration and earlier downshifts during braking, while Normal mode puts an emphasis on fuel economy with a lower-rpm shift schedule.

The Hyundai Kona may join a long list of competitors in the small CUV segment, but its striking design and quality engineering allow it to stand out from the crowd.