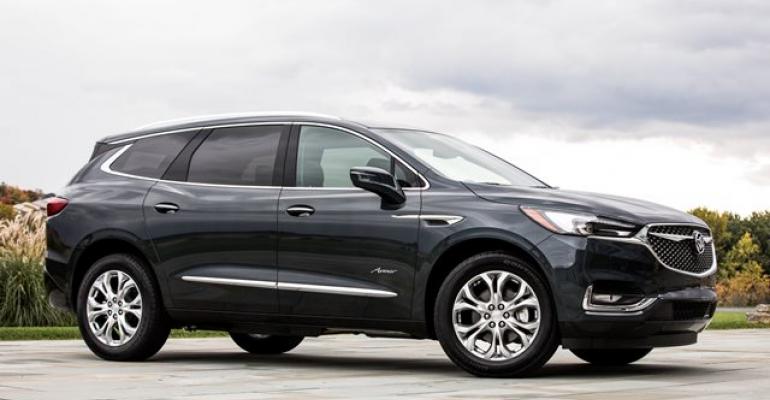 The 7-passenger Enclave is Buick’s golden-roasted turkey, a feast for the eyes and as satisfying to the palate of today’s car buyers as anything on the table.

TALLULAH FALLS, GA – It’s a 1,000-ft. (305-m) plunge to the bottom of Tallulah Gorge, a 2-mile (3.2-km) canyon cutting through northeast Georgia, and the hike to the bottom and back leaves its thousands of annual visitors breathless and weak-kneed.

The folks at Buick probably can relate. The premium General Motors brand hit rock bottom in the U.S. a few short years ago with a 3-product lineup about as exciting as Uncle Bob sleeping off Thanksgiving.

But as Buick’s fortunes continued to rise in China and GM’s post-bankruptcy financial engine started humming again, the brand has added fun, functional, technology-driven models to a lineup with appeal to a broad range of American buyers.

After a long climb back, Buick has its legs again and the redesigned ’18 Buick Enclave effectively caps its return. In fact, two more new products are due from Buick in the coming months to round out a portfolio numbering as many as 10 cars and crossovers less than four years old.

But the Enclave is Buick’s golden-roasted turkey, a feast for the eyes and as satisfying to the palate of today’s car buyers as anything on the table.

Sleek, SUV-like styling belies the large crossover’s massive proportions, while the spacious interior is like a Crate and Barrel sofa with its modern design, hints of craftsmanship and comfy-but-firm seating. Hidden under-floor storage, a programmable power liftgate with ground illumination, an available power-folding third row and a sliding second row for easy access to the way back (even with a child seat latched in) make the Enclave as versatile as a Leatherman.

The roomy crossover drips with technology, too, such as an available 4G Wi-Fi hotspot, USB ports for every passenger, standard tri-zone automatic climate control, a frameless 8-in. (20-cm) infotainment screen, active noise cancellation, a 360˚ surround vision camera for low-speed maneuvering and an optional rear-camera mirror that works like a traditional mirror or functions as a camera for an unobstructed and high-resolution view out the back.

Under the hood, an updated version of GM’s 3.6L gasoline direct-injected V-6 links to an all-new Hydra-Matic 9T65 9-speed automatic transmission to power the Enclave down the road with confidence.

A new Avenir specialty trim level layers on more interior luxury, such as a wood-accented steering wheel and a reconfigurable 8-in. instrument cluster, while the exterior receives items including a unique grille treatment and the suspension is upgraded with continuous damping.

There also is an optional air ionizer to eliminate odors and improve air quality. An ionizer may sound superfluous, but huff and puff up and down the gorge here on a hot day and you and your passengers will be awfully thankful for the bit of excess.

Such a cornucopia of content, however, does not come cheaply. The base price of the new Enclave is $40,970, which is a reasonable $980 more than the outgoing model. But start stepping up the model range from entry Enclave trim into Essence and Premium to where all those sexy features lie and the sticker price races past $50,000 as fast as Aunt Dottie through a third glass of Beaujolais.

Models tested here included a Premium model with all-wheel drive and $5,165 worth of options, including rich Havana Metallic paint for $395, to cost an all-in $56,455. A top-of-the-line Avenir model also tested commands $59,435. Yep, that’s Buick knockin’ on 60-large (Note to penny-pinching product planners: If you want to play in the Audi pricing segment, hard plastic cupholders do not cut the mustard).

Yet for customers who check all the boxes without hesitation, the Avenir will satisfy their pretentiousness. It delivers attractive styling nuances and technology tidbits, such as a spectacular full-speed adaptive cruise control system unavailable elsewhere within the Enclave lineup and an exclusive reconfigurable IP that helped earn it a 2017 Wards 10 Best UX award.

While GM intends to expand Avenir’s content offering down the road as it tries to emulate sister-brand GMC’s success with the 17-year-old Denali sub-brand, the bang-for-the-buck play would be one step down to the Enclave’s Premium line. Premium models still offer fashionable items such as Apple CarPlay and Android Auto connectivity and head-turning 20-in. wheels.

Choosing a Premium model will not forgo the real-time damping suspension for the standard MacPherson front- and 5-link independent rear setup. But over several hours of testing both models, the difference in handling and ride comfort between the two is not extraordinary, with the exception of how well the continuously damping suspension smoothed out some urban Atlanta streets seemingly neglected since the Reconstruction.

The big difference in ride and handling lies between the two generations of the Enclave. The redesigned model shed 350 lbs. (159 kg) and feels astonishingly lighter on its feet.

All trim lines receive GM’s 3.6L V-6, a real workhorse for GM that powers trucks, SUVs and sports cars. For good reason, too, combined with the 9-speed it pulls the big Enclave around nicely, performing particularly well through winding mountainous terrain that would bring many other powertrains to their knees. The transmission is not finicky, either, despite the extra few gears and downshifts quickly when prompted.

A pair of all-wheel-drive systems is available on Essence models and higher trim levels (base models are front-wheel drive). The more sophisticated, and expensive, of the two employs an active twin-clutch rear differential that distributes torque to the right and left wheels and up to 40% to the rear wheels.

The plumb rural southern roads here offer little opportunity to put the pricier AWD to the test, but it handles a short stint on some off-camber gravel roads nicely.

The Enclave also adopts GM’s rear-seat reminder, which alerts drivers to the possibility of a forgotten child or another valuable item such as cousin Billy’s late birthday gift.

But arguably one of the biggest safety advances for the Enclave is its redesigned side rearview mirrors. Previous Enclave mirrors were integrated into the A-pillars, an approach it shared with other large crossovers from GM. But married to already-massive A-pillars, the design created dangerous blindspots during turns. The new Enclave moves those mirror housings onto the doors where they belong to significantly reduce the blindspot and enhance exterior design.

The big takeaway from the redesigned Enclave, however, is the ease with which it devours mile after mile of roadway without fatiguing the driver or passengers. Much of that capability is owed to the Enclave’s numerous acoustical treatments, including a triple-laminate windshield, triple door seals and premium side glass to seal, dampen or deaden unwanted noises and enhance others.

The active-noise cancellation from Bose, for example, operates through the Enclave’s audio system to mitigate exterior noise such as wind but at the same time amplify human voices so passengers converse with ease. But it also improves efficiency by killing low-frequency noises created by fuel-saving engine functions that otherwise would annoy passengers.

The Enclave, however, is not for everyone. It remains a very large vehicle and every inch as big as GM’s fullsize truck-based SUVs, although the automaker calls the Enclave a midsize SUV for its own classification purposes. And while the fuel economy is competitive for its class, the Enclave is hardly the most efficient choice for poking about town.

That is, unless your commute includes a posse of tweens, teenagers and all the necessities to get a family through the school day or off to grandmother’s house for the holidays. If that’s the case, few 3-row crossovers perform the task as comfortably and efficiently as the Enclave.