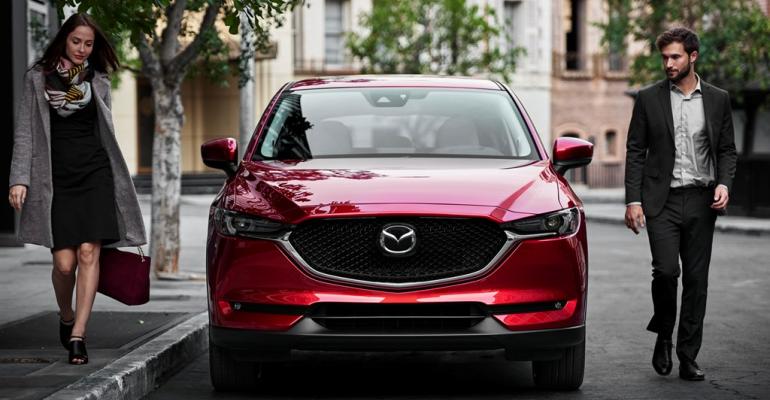 His team’s road testing of the vehicle in the U.S. had taken longer than expected, stemming from a desire to get the vehicle just right for its biggest-selling market.

The unplanned protracted stay in America cut into a vacation Kodama and his wife had planned back in Japan. She went without him. He eventually arrived, but on the last day of the trip.

“I cried,” he tells journalists here during a product presentation as they were about to test drive the second-generation CX-5. “When you are driving the vehicle, get a mental picture of my crisis.”

Everybody just sat there. It’s not what you’d expect from an auto engineer, particularly one from Japan. Typically, they’re sort of stoic. That night, I ran into Kodama at a reception. I asked him, “That story you told this morning, did you really cry over those missed vacation days?” He laughed and said, “It was a joke.”

What isn’t in jest is the effort Mazda put into improving what already had been a well-received vehicle when it debuted in 2011.

The new CX-5 comes with improvements in NVH, a better throttle response, a 15% stiffer chassis and a slight improvement in ride while maintaining steering and handling nimbleness.

Mazda is mama-bear protective over its midsize CUV. With good reason. It represents a quarter of the automaker’s global sales. And it competes in a hot segment, especially in CUV-crazy America.

Mazda dealers in the U.S. last year delivered 112,235 CX-5s, by far the brand's best seller followed by the Mazda3 compact sedan, according to WardsAuto data.

If you’re counting, Mazda made 698 improvements to its most popular vehicle.

“Our main job was not to screw up what’s already a good vehicle,” says Dave Coleman, manager-vehicle dynamics engineering, a unit he calls the “nerd department.” (Another Mazda engineer joke.)

Mazda interior designers say they took a human-centric approach. The driver’s layout is symmetrical. That’s not as common as one might think. For example, a bottom-hinged accelerator pedal has been tailored to aid smooth acceleration. The front A-pillars are pulled back 1.3 ins. (35 mm) compared with its predecessor to provide greater visibility.

The cabin is filled with soft-touch quality materials. The look is a manifestation of “Mazda Premium,” the auto company’s initiative to go upscale yet stop short of actually entering the luxury segment and compete against the likes of Mercedes-Benz and BMW.

But in a daring comparison-drive event on the streets of San Diego, the CX-5 held its own against some more expensive rich kids on the block, including the Audi Q3, BMW X1 and Lexus NX200t.

Mazda is shouting from the rooftops that it has made the CX-5 quieter, reducing high-frequency noise that can affect rear-seat/front-seat conversations and low-frequency sound that causes fatigue.

Coleman recalls that during a media presentation when Mazda introduced the ’16 CX-9 fullsize CUV, he had for the sake of brevity said engineers put in 50 lbs. (21.8 kg) of damping and did a lot of other things.

“Everyone heard the first part about the 50 lbs., and wrote about that but didn’t say what else we did,” he says.

So this time around, Coleman outlines virtually everything Mazda has done to quiet down the CX-5.

It’s a long list. A Cliff’s Notes version includes: lowering windshield wipers below the hoodline to take them out of the airstream; adding a third seal between the front and rear doors to prevent door-gap turbulence; covering a storage well in the cargo area; and installing acoustic glass in the front side windows.

The CX-5 features the first North American application of G-Vectoring Control in an all-wheel-drive vehicle. The Mazda-exclusive technology uses engine timing to control chassis dynamics, creating smoother and more accurate steering inputs. We sensed that on curvy roads on a test drive southeast of San Diego.

The G-Vectoring system briefly (30-40 milliseconds) and imperceptibly reduces torque to improve steering stability. When turning, the load shifts to the front tires, creating a better response.

Mazda initially considered using the brakes to do that, but it was scratched on the premise that it responded too slowly and created an unnatural feeling for the driver and occupants.

Engineers decided the subtle amount of “braking” needed to create a greater sense of stability – about eight lbs. of pressure to the vehicle’s front end – could be achieved by reducing ignition spark instead.

The vehicle comes with a punchy standard 2.5L gasoline powered engine that produces 187 hp at 6,000 rpm. That’s a 3-hp gain over the previous model.

The CX-5 offers spot-on stability, especially for a high-riding vehicle. I’m not much into racing CUVs, but my media-preview driving partner, Henry Payne of the Detroit News, is.

He has owned and raced Porsches for years, and he threw the CX-5 around tight curves. The vehicle kept its cool. It didn’t get nervous at times when you might have thought it would.

That said, don’t look for CX-5s at the local racetrack. But Mazda hopes they’ll be a familiar sight in America as a 5-passenger utility vehicle with plenty of cargo room, functionality and features.

Pricing ranges from $24,045 for the front-wheel-drive Sport model to $30,695 for the Grand Touring trim level with AWD.

A Grand Touring premium package adds $1,830 to the deal. The vehicle looks terrific in its signature color, Soul Red Crystal. But that costs $595 extra.