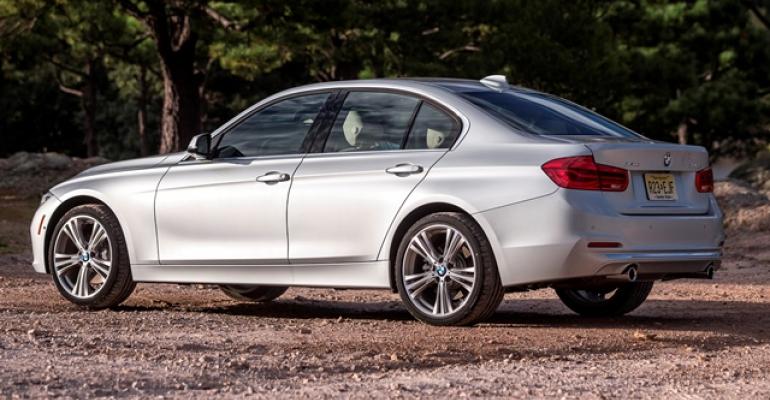 BMW updates its all-important 3-Series sedan for &rsquo;16, with small styling changes, significant chassis improvements and a major overhaul under the hood.

CHIHUAHUA, Mexico – Flagship sedans and high-performance sports cars aside, there is no more important vehicle in the BMW lineup than the 3-Series, which launches this month with a freshened exterior, updated interior styling, a plug-in hybrid powertrain and an all-new turbocharged inline 6-cyl. engine.

Now in its sixth generation, BMW says the 3-Series has amassed worldwide sales of more than 14 million units since its debut in 1975. That includes some 2.6 million sales in the U.S. since 1980, representing 45% of all BMW U.S. deliveries for that period, according to WardsAuto data. The model accounted for nearly 70% of the brand’s sales in some years, and has only dipped below 40% in the years since 2011.

Against that backdrop, BMW planners are evolutionary when it comes to updating the company’s sales leader, and the ’16 3-Series is no exception. Thoughtful refinements highlight the exterior and interior changes.

Outside, designers sought to increase the sedan’s road presence by giving it a wider look with broader air intakes at each side of the front apron and full-width LED taillights and wider trim on the rear apron. Inside, new high-gloss black trim, chrome accents and ambient lighting add to the upscale feel, backed by standard sport seats in all 328i and 340i models.

But the big story for this midcycle overhaul is the world premiere of the B58 I-6 engine, marking the first application of the modular-block powerplant in a BMW-badged car. The 0.5L-per-cylinder modular block debuted in 3- and 4-cyl. versions in the ’15 Mini BMW sub-brand.

Exclusive to the 340i is engine encapsulation that encases the powerplant in acoustic-foam insulation to help retain heat for up to 36 hours after the car is shut down. BMW says even after 12 hours at 32° F (0° C), the engine temperature is up to 50° F (28° C) warmer than without encapsulation. BMW says the retained heat helps the B58 start easier, warm up quicker, use less fuel and reduce emissions.

For the ’16 model year, BMW optimizes the car’s suspension geometry, revises steering and upgrades dampers to improve high-speed stability and overall handling and reduce body roll, with particular attention to the upper front strut mounts that go from 3-bolt to 5-bolt anchors. An optional Track Handling Package for the 340i adds variable sport steering, adaptive suspension and sport brakes with distinctive blue calipers.

The standard transmission is an 8-speed automatic with steering-wheel-mounted paddle shifters, with a 6-speed manual as a no-cost option, both with downshift rev-matching capability.

We tested both the all-wheel-drive 340xi and the 340i rear-wheel-drive on truly challenging roads in Mexico’s Copper Canyon, and found the powerplant an outstanding replacement for the 335. Though the engine can feel briefly flat at launch, it takes barely a heartbeat for the twin-scroll turbo to catch its breath and launch the sedan with authority. At 2,200 rpm, the tachometer takes a sudden jump past 3,000 and the engine never stops pulling until it hits redline.

Manual-transmission gear changes are smooth thanks to a dual-mass flywheel that helps offset uneven engine speeds, and automatic rev-matching which blips the throttle on downshifts to match engine speed with the gear ratio.

Rev-matching also is featured on the 8-speed automatic, along with Eco Pro mode which automatically decouples the engine from the transmission when the driver lifts off the throttle to coast on a downhill grade, allowing the engine to idle rather than producing unwanted engine braking drag.

While the all-wheel-drive setup in the 340xi provides reassuring traction, the rear-wheel-drive 340i remains the most true to the 3-Series provenance, exhibiting intuitive handling backed by confident braking and responsive and accurate steering. Though the electrically assisted steering still lacks the mechanical feel of earlier generations, BMW engineers seem to be making steady progress toward injecting some of that direct connection into the system.

Now that BMW’s modular-engine family is in place, engineers will be free to focus on solving a few minor imperfections in an otherwise stellar machine.