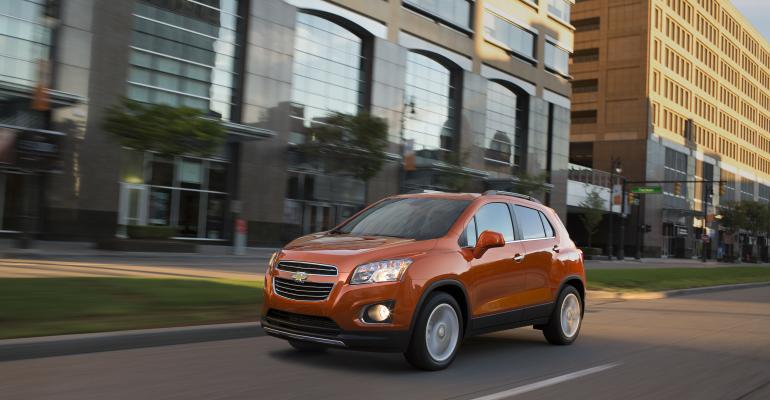 The Trax takes aims at two sets of buyers, empty-nesters looking to downsize and young people buying their first new car. It is an approach that has played to varying degrees of success over the years.

SAN DIEGO – Fun, functional and kinda far out, man. Those words aptly describe the ’15 Chevy Trax, a sporty 5-door vehicle with lots of cargo versatility and a product still relatively out front on the quickly emerging compact CUV segment in the U.S.

The 5-passenger Trax, arriving at dealers now but on sale in a number of global markets for nearly a year, boasts a lively-yet-fuel-efficient 1.4L 4-cyl. engine, a surprisingly well-sprung suspension, superb steering and an exclusive fold-flat front seat that opens up a cargo space to accommodate items upwards of 8 ft. (2.4 m) long.

That’s enough space to accommodate a standard surfboard or a modest load of 2x4 lumber.

It is also hitting the market at an opportune time. The compact CUV segment includes roughly 11 entries, but a number of them are awfully long in the tooth and a couple others are poised for the graveyard altogether. That makes the Trax one of the freshest offerings in the bunch.

If that alone does not set this little-engine-that-could up for success, a booming segment should help. Compact CUV sales are expected to grow to 2 million units annually in the next few years. Last year, the segment accounted for 484,650 deliveries in the U.S. and a 3.0% share of industry sales, up from 218,659 and a 2.1% share five years ago, according to WardsAuto data.

There’s good reason for the Trax’s warm reception, starting with the powertrain. General Motors outfits the Trax with its 1.4L turbo 4-cyl., which includes performance-enhancing direct injection and continuous intake- and exhaust-cam phasing.

The engine mates to a 6-speed automatic transmission with manual shifting capabilities. It boasts a steep first gear and a tall overdrive to balance off-the-line performance with fuel efficiency and noise attenuation at highway speeds.

At the same time, this engine-transmission combination is getting along in years by today’s standards, where updates occur more rapidly. The 4-cyl. dates back 2010 and GM has a new family of small-displacement engines coming, but unfortunately not in time for the Trax. That’s a shame.

And, yes, there’s a 2.0L turbo 4-cyl. in GM’s stable that would make the Trax a real standout, but this version of GM’s Delta small-car platform will not accommodate that engine.

Aside from some injector noise at idle and a bit of vibration in the steering wheel, the 1.4L handles its tasks nicely enough around suburban San Diego. The time-tested mill also helps keep the CUV’s base price at a highly approachable $20,995.

However, the Trax’s greatest attribute might be its steering and suspension combination. The column-mounted, variable-effort electronic power steering unit from specialist Nexteer is a little on the heavy side at low speeds, which is entirely agreeable to us, and it imparts outstanding on-center feel.

The suspension leverages a relatively common McPherson strut design up front with coil springs and a large stabilizer bar. The rear features a torsion beam unit using a V-shaped beam and gas-charged twin-tube shocks. GM engineers specifically focused on stiffening damper performance, and the result is a well-sprung suspension that gives the Trax a sporty attribute.

It still is no track star, but in a segment of vehicles with uninspiring ride and handling dynamics the Trax is noteworthy.

An exciting choice of color combinations and slick, affordable infotainment options further distinguish the Trax from many of its peers.

Funky paints include a blistering Orange Rock metallic and a rich Ruby Red metallic, while a Brilliant Blue metallic seems inspired by the spotless San Diego sky. Interior colors lean to the more subdued light-gray/dark-gray pallette, but the designs of both the cloth and optional leather seat coverings have unconventional, youthful textures.

The seats are comfortable, too, or at least good enough for a few hours of city testing. They easily should meet the needs of mall-hunters who probably will flock to the Trax, although as a 5-passenger vehicle GM should not have omitted a center headrest in the second row.

The instrument panel recalls the motorcycle-inspired gauge package of the Chevy Sonic compact car, an execution we’ve raved about previously.

The highlight of the Trax’s infotainment system is the available OnStar 4G LTE with wireless capability. The 4G connection also speeds up the optional navigation system, as well as calls to the OnStar concierge service, and it’s just plain fun knowing your smartphone is always hooked up to a robust wireless signal. Jump out of the Trax and the wireless signal is good for 20 ft. (6.0 m).

Smartphones pair to Chevy’s standard MyLink system, a user-friendly infotainment hub with a 7-in. (17.8-cm) color touchscreen. It is BringGo compatible, so budget-minded owners can link the navigation system in their smartphones to the touchscreen, instead of buying an upgraded MyLink package.

The Trax takes aims at two sets of buyers, empty-nesters looking to downsize and young people buying their first new car, an approach that has played to varying degrees of success over the years.

But meandering around suburban San Diego, with its myriad shopping centers and active lifestyles, it is easy to see the enormous potential for a small, versatile and fun-to-drive CUV such as the Trax. It will be interesting to see if the rest of America feels the same.