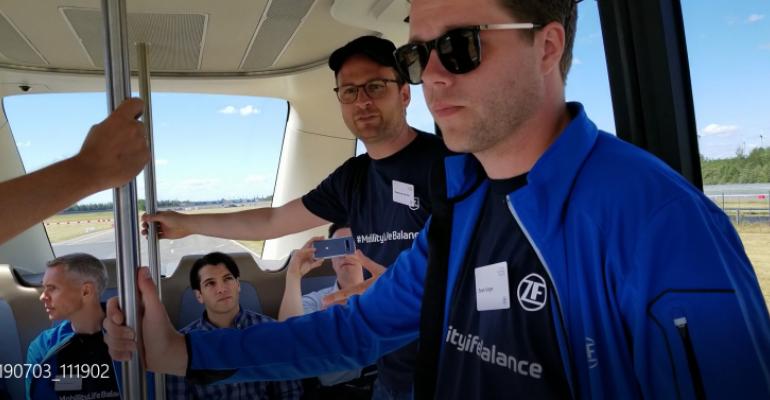 ZF and partner 2GetThere are rolling out autonomous shuttles in Europe and the Middle East. Through advanced chassis control, the supplier’s goal is to improve vehicle handling and eliminate motion sickness. And the world’s first external side airbag is in testing.

KLETTWITZ, Germany – From external airbags for side impacts and collision-avoidance steering systems to a self-driving shuttle and a research project into motion sickness, ZF Friedrichshafen is pouring resources into next-generation mobility.

The German supplier ties together these advanced technologies under the tagline #MobilityLifeBalance as a campaign to deliver clean, safe transportation options that are automated, comfortable and affordable for everyone.

Speaking to journalists at ZF’s Global Technology Day hosted at a test track here north of Dresden, CEO Wolf-Henning Scheider (pictured, lower left) says there is much room for improvement in the industry, noting average traffic speeds in cities such as London and Rome have dropped below 10 km/h (6 mph). 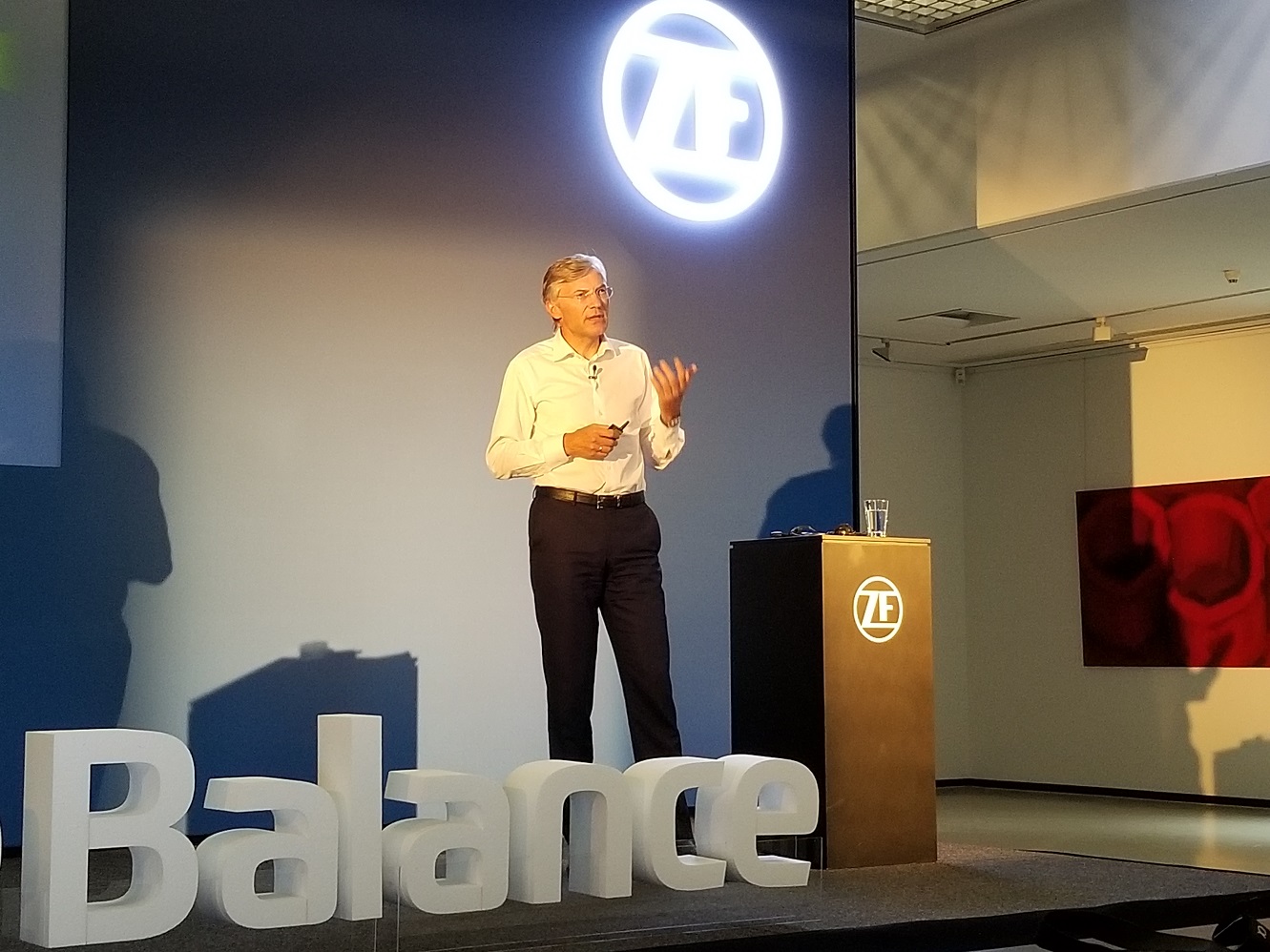 “In Stuttgart, people spend 34 minutes per day in traffic jams – that can hardly be called freedom of mobility,” Scheider says.

“Our goal is to bring people’s mobile life back into balance. We check our technological innovations against the following questions: How does it help customers in their individual mobility? How does it contribute to a more efficient, more seamless, more affordable and more reliable mobility experience?”

Earlier this year, ZF acquired a 60% stake in 2GetThere, a mobility company founded in the Netherlands in 1984 and which has been operating autonomous shuttles for passengers and cargo at airports, business parks and residential developments in places such as Masdar City in Abu Dhabi, Singapore and Dubai.

While self-driving shuttles remain in their infancy throughout much of the industry, 2GetThere already has transported more than 14 million passengers and logged more than 62 million autonomous miles (100 million km) over the years.

At the Rivium business park in Rotterdam, 2GetThere shuttles have been running since 2006, moving 2,000 passengers daily. By the end of this year, ZF engineers tell Wards there will be at least six shuttles running at Rivium. 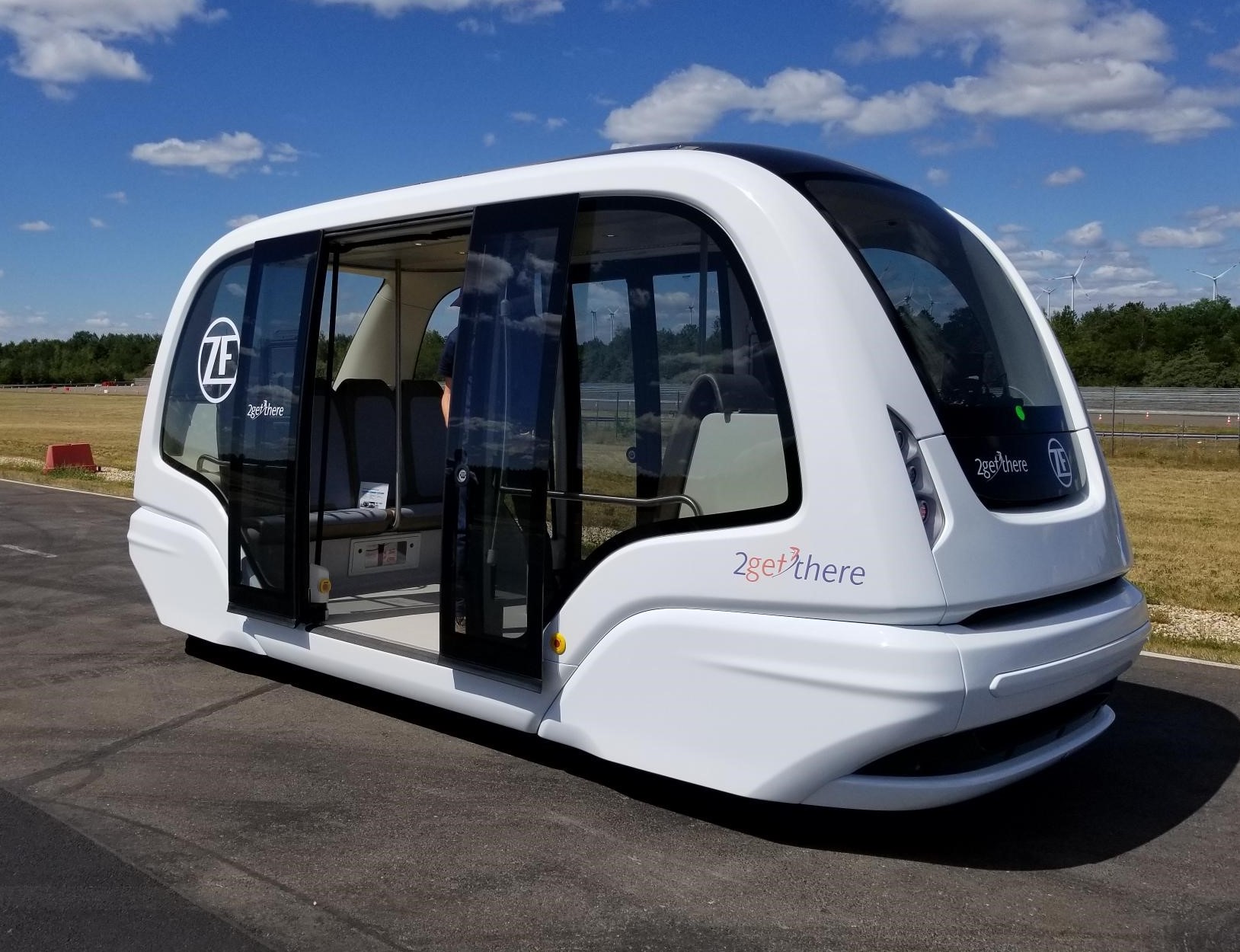 At Brussels Airport, 2GetThere plans to have 11 shared-autonomous vehicles running in mixed traffic beginning in 2021. Capacity is 3,000 passengers daily on a dedicated route that runs 3.5 miles (5.7 km) in length.

ZF engineers say those vehicles will be third-generation Group Rapid Transit shuttles with room for 22 passengers and up to 20 degrees of steering angle, allowing a great degree of lateral movement. A test drive here in one of these vehicles (see photo above), despite a small glitch at the beginning, was smooth, quiet and uneventful.

2GetThere also operates smaller Personal Rapid Transit shuttles with room for four adults – 10 have been operating in Masdar City since 2010. Nearby in Dubai, plans called for 25 of the larger group transit shuttles for a residential development, but that project has been delayed a few years.

The shuttles are equipped with ultrasonic sensors and two solid-state bi-directional lidar sensors for use in segregated lanes on a fixed route. 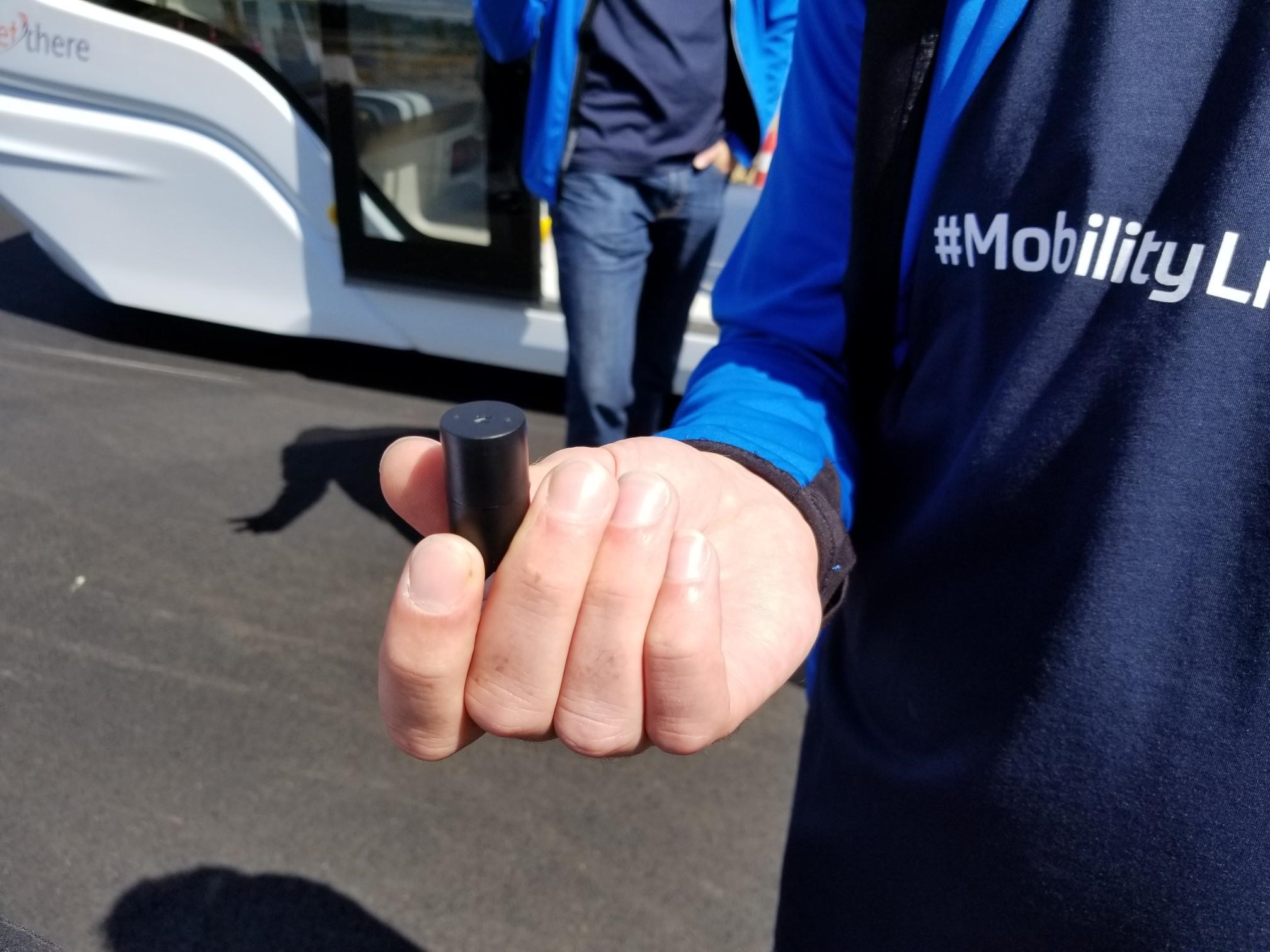 The sensors communicate with magnetic elements that are about the size of a C-cell battery (see photo above) and are placed below the road surface about 13 ft. (4 m) apart. The vehicles are programmed to stay within 4 ins. (10 cm) of the magnetic elements along the route and can make emergency stops if a pedestrian steps in front.

ZF also is a partner in the e.GO MOOVE GmbH joint venture, which has produced the e.GO Lux concept electric minibus for private use. Equipped with six seats, the shuttle is intended to be a comfortable conference room or movie theater on wheels.

Finally, ZF is ready for the era of autonomous ride-hailing shuttles that can function without steering wheels and pedals, relying instead on ZF technologies such as radar, lidar and cameras, as well as powerful processors such as ProAI RoboThink to process data and make decisions as a human driver would. 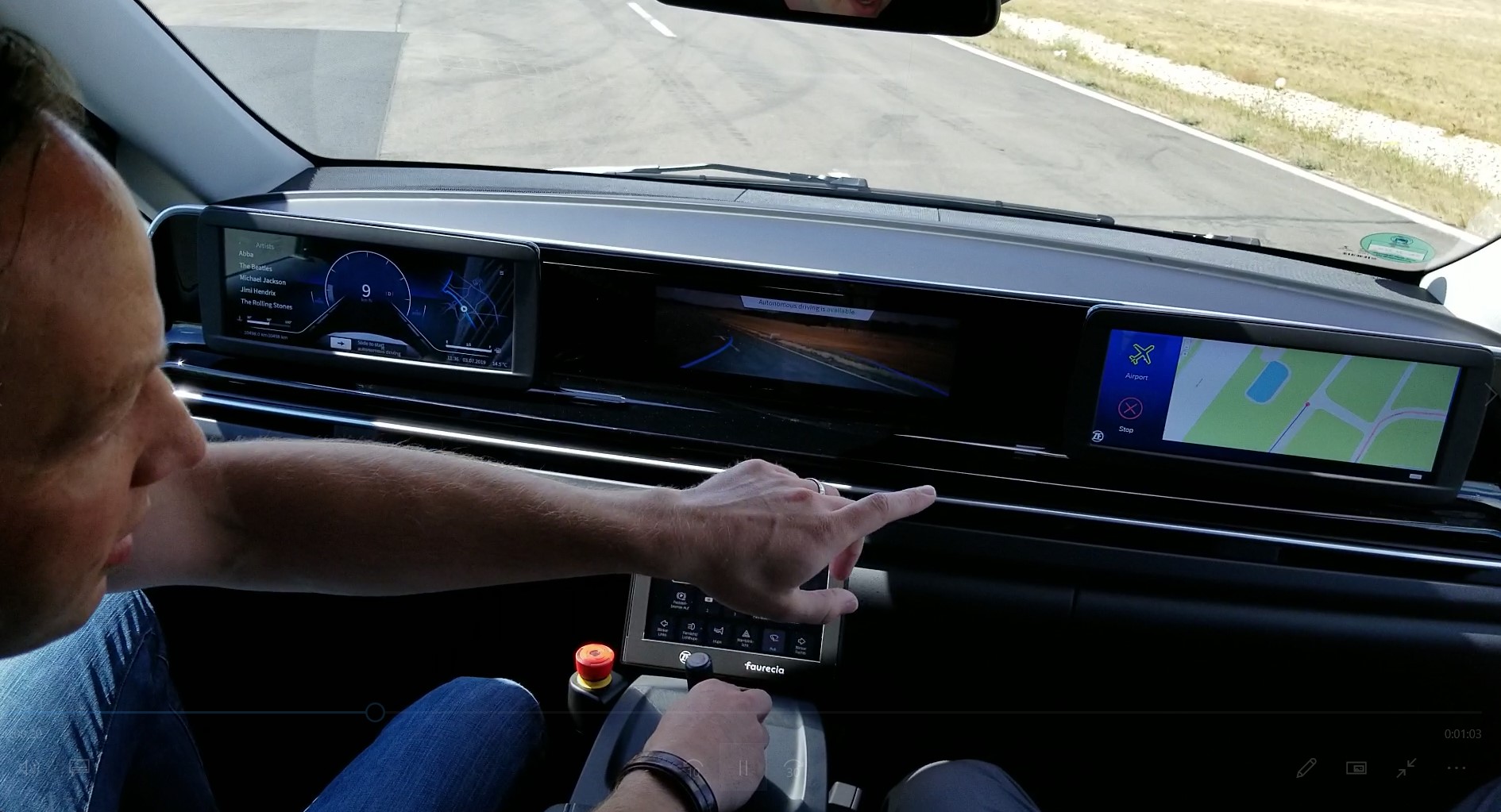 ZF engineer points to programmed route for self-driving Mercedes-Benz Vito as it moves without steering wheel or pedals.

In a prototype Mercedes-Benz Vito van with no steering wheel or pedals, the vehicle followed its programmed route during a test ride without incident, but its steering felt darty and robotic – far from smooth.

The coming age of autonomous vehicles will create new opportunities for passengers to occupy themselves, allowing them to sit across from each other or face the side windows, rather than everyone looking forward as they do in today’s vehicles.

That freedom also will create certain physical challenges as the brain attempts to adapt to this new dynamic in the cabin. Dizziness, headaches and nausea already afflict roughly a third of the world’s population in conventional vehicles. That percentage is sure to rise in the world of autonomy.

ZF is working with neuro-technologists to investigate how to detect motion sickness at an early stage and how to prevent it in the future. The research project employs a set of sensors inside the vehicle and on a custom-made cap worn by a poor volunteer doing crossword puzzles in the backseat (see photo below) while the driver maneuvers through a slalom course at a good clip. 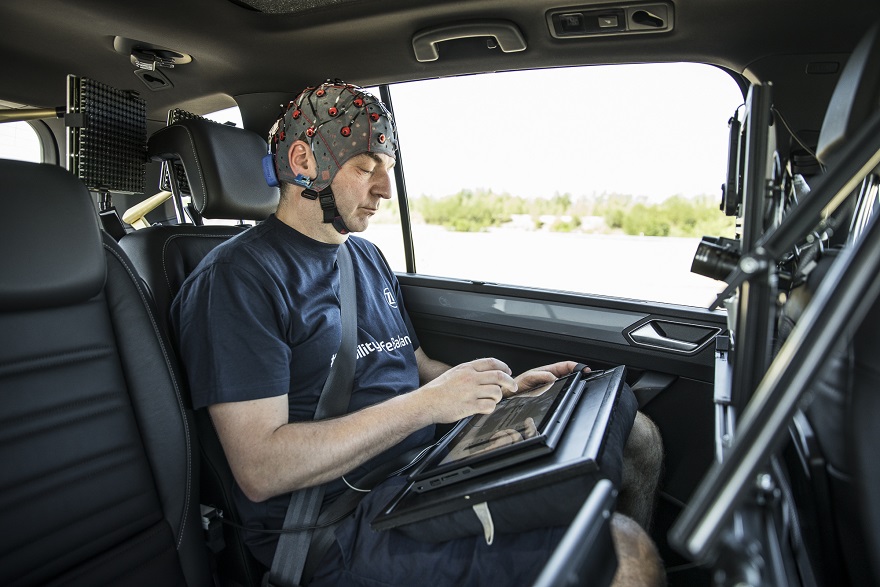 The sensors convey the occupant’s temperature and level of distress during the drive.

In addition to the research, ZF is working on a chassis-control concept intended to mitigate unpleasant vehicle movements by predictively assisting to smooth out bends and bumps in the road.

Linking advanced sensors, a smart control unit and intelligent actuators that lay the groundwork for automated vehicles, ZF refers to the system as Flying Carpet 2.0 for its ability to transport occupants without jostling them about. 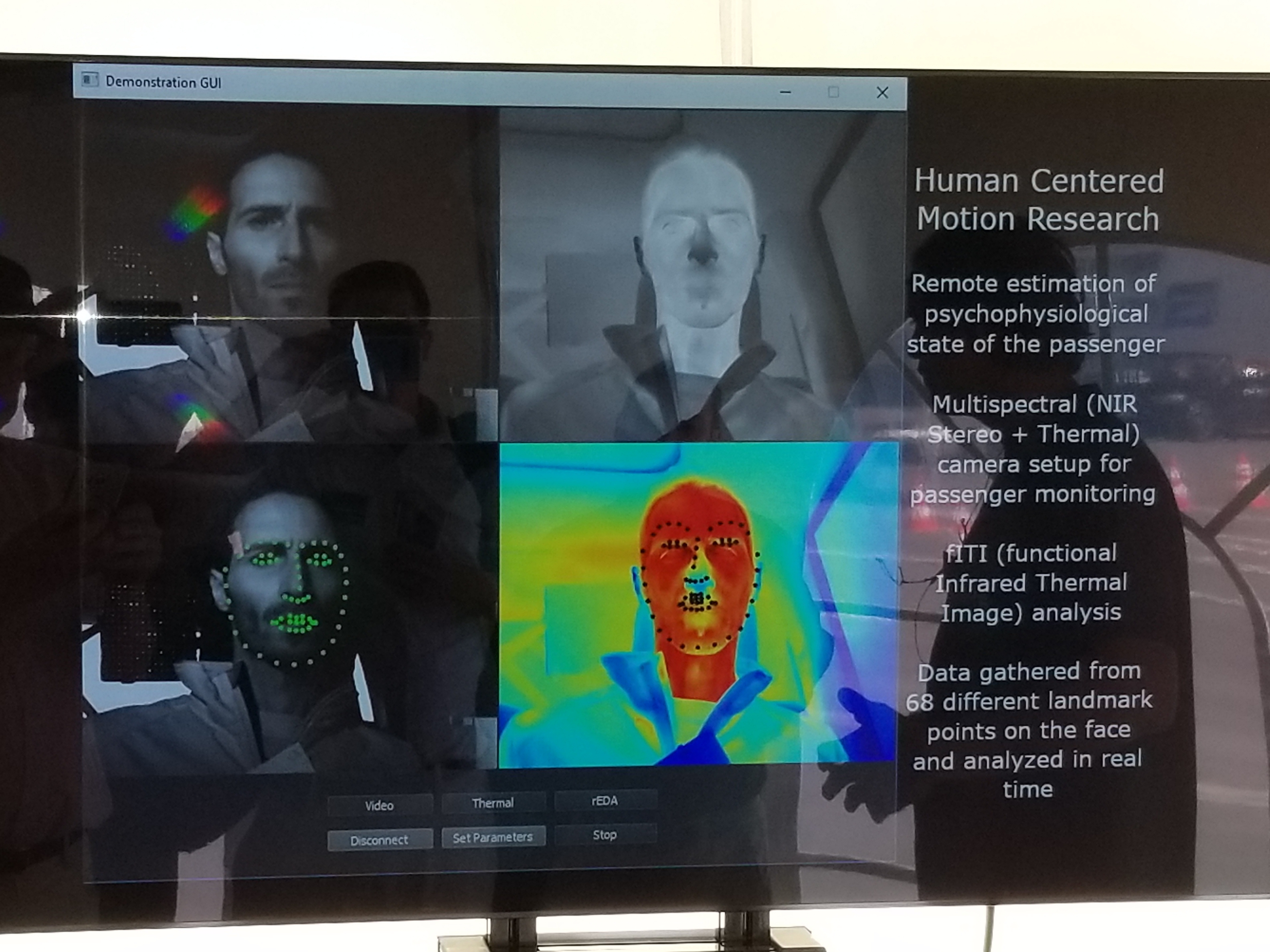 Enabling technologies include the sMOTION fully active damping system that uses four actuators to adapt the suspension movements of each wheel based on the driving situation and road surface below. 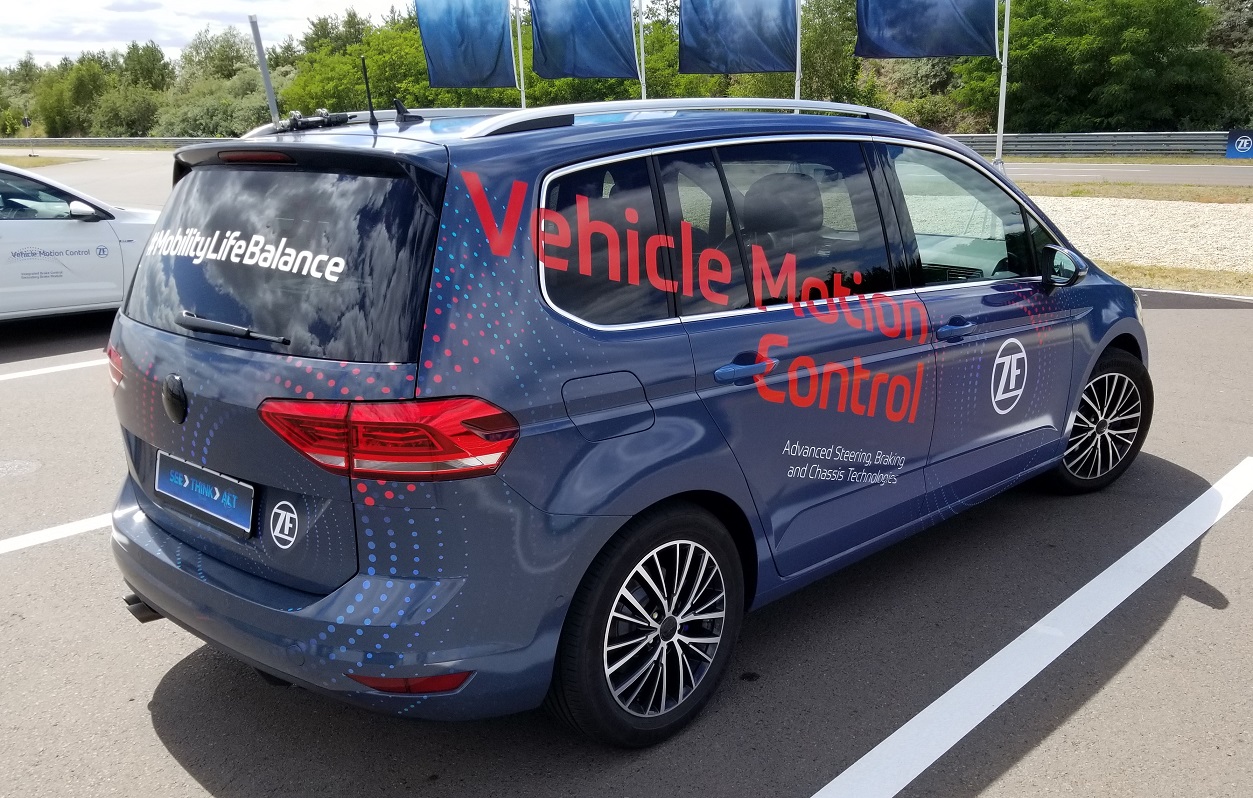 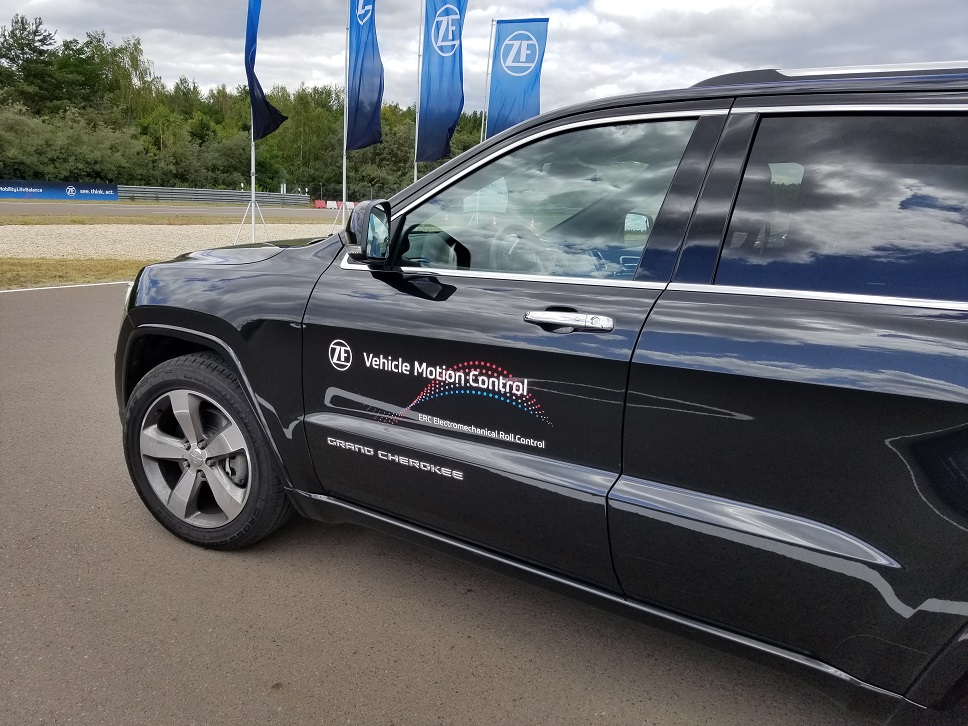 Another impressive demonstration here is a collision-avoidance automated steering system that uses cameras and sensors to detect a person or object entering the roadway. The driver may respond but perhaps not forcefully enough.

ZF’s system can detect how much steering angle is needed to avoid a collision based on the projected path of the person or object, then act on that information. The driver feels the steering wheel tug more aggressively.

All these scalable technologies can communicate with each other and with onboard driver-assistance systems through ZF’s cubiX smart central controller to smooth out lateral, longitudinal and vertical motion and enhance the ride, both for occupants as well as drivers. 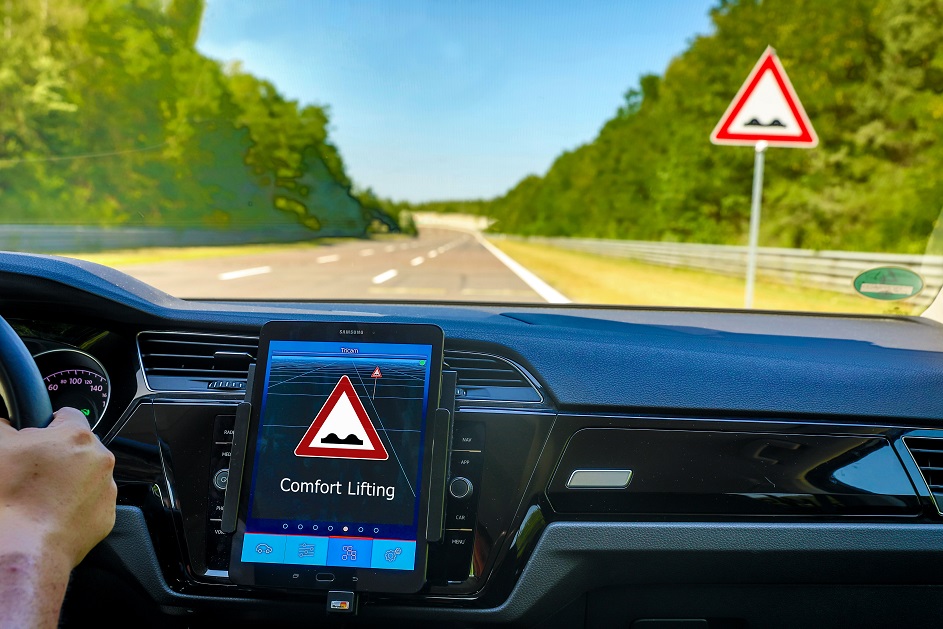 Software and active dampers can help smooth out bumps in the road.

Ultimately, ZF’s goal is to eliminate motion sickness by allowing the vehicle to better plan and control its maneuvers and trajectory, and the system also could involve haptic, visual and audible countermeasures in the cabin to help comfort a queasy passenger.

Having acquired safety specialist TRW in 2015, ZF has airbag expertise it wants to extend to the exterior of the vehicle. A quarter of fatal accidents are tied to side impacts due to the lack of crumple zone and the close proximity to occupants.

External airbags have been designed for frontal collisions, particularly with pedestrians and bicyclists, but ZF is proposing the world’s first external side airbag, triggered by pre-crash sensing.

The airbag measures 92 gallons (350 liters) – three times the size of most interior airbags – and would be filled by three inflators detonating simultaneously. ZF engineers say it takes 100 milliseconds to deploy.

In a demonstration here, the airbag deploys (quite loudly) from the underside of a prototype compact car, in between the A-pillar and C-pillar, as an inflatable car is propelled forward on a collision course (see photo below). The prototype car escapes without a scratch. 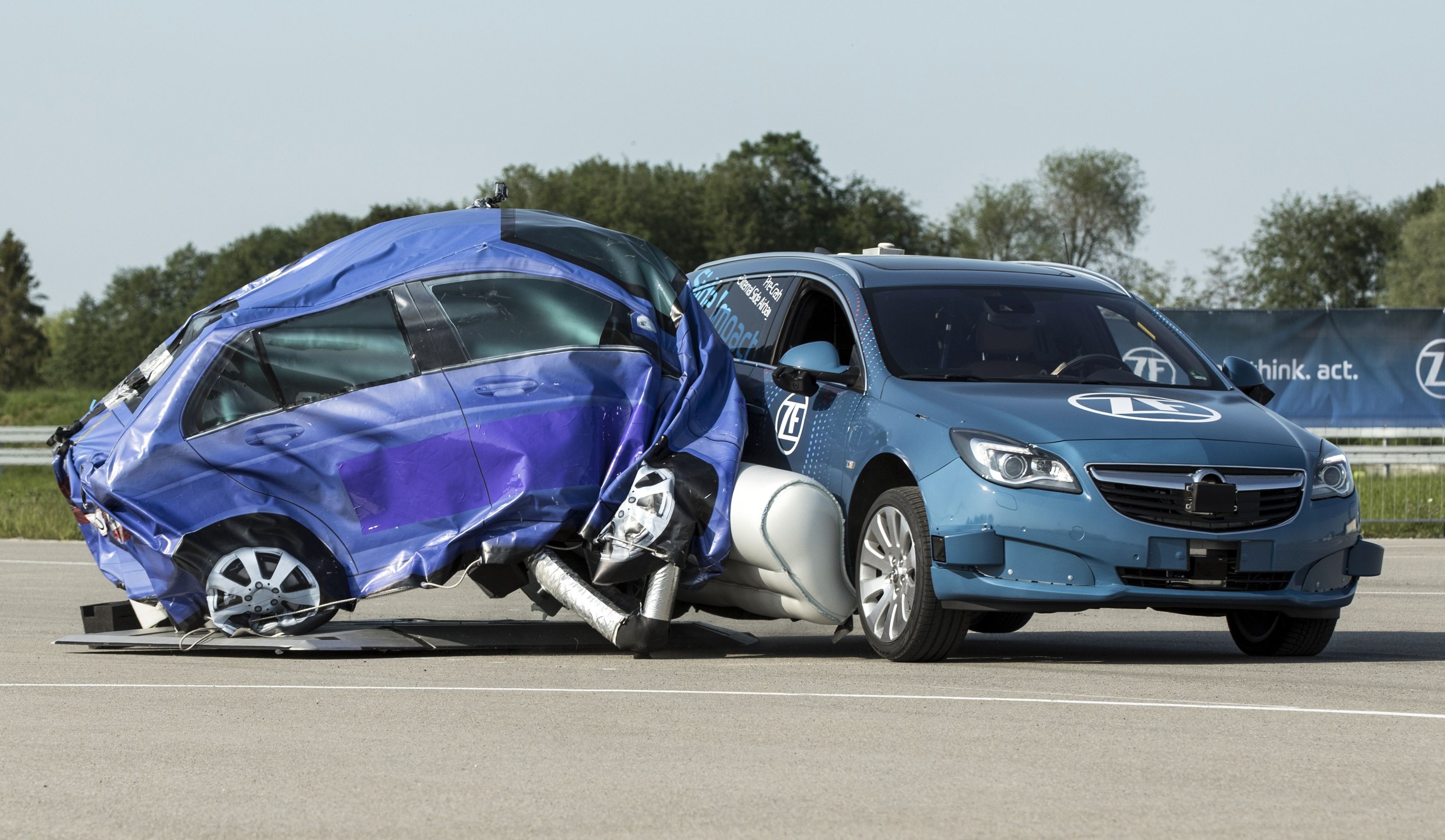 ZF is not yet discussing publicly the results of crash tests with actual vehicles. The airbag fabric is twice as thick as interior airbags, but it’s hard to imagine an external airbag staying inflated during a high-speed collision with another vehicle without being sliced open.

The supplier has no contract yet for the external side airbag, and the system cannot be retrofitted to an existing production vehicle. Engineers say the technology needs to be integrated at the outset of the vehicle-development program, which means it would be at least four years before it could appear on a production vehicle.

ZF says the system can reduce accident severity up to 40%.