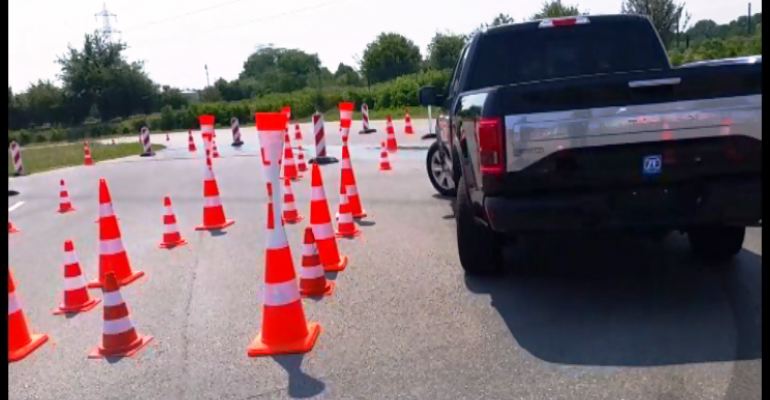 To demonstrate the potential gain in agility, ZF has equipped a Ford F-150 to pivot the rear wheels up to 12 degrees in either direction, reducing the turning circle from 48 ft. to 38 ft. (14.6 m to 11.6 m), roughly the same as a Ford Escape CUV.

VIENNA, Austria – Consumers wishing their fullsize pickup would maneuver like a small utility vehicle might want to start shopping for a new truck in three or four years.

That’s the timeframe ZF says it hopes to be in the market with technology that steers the rear wheels of pickup trucks.

Since November 2013, ZF has supplied Porsche and several other customers with its Active Kinematics Control, which uses an electrically driven actuator (or in some cases two actuators, one for each rear wheel) to articulate the rear wheels up to 5 degrees in either direction.

Other customers include Audi (Q7), BMW (7-Series), Cadillac (CT6), Ferrari (GTC4Lusso), Lamborghini and Mercedes AMG. Within the next three years, another five customers will offer AKC on new vehicles, the supplier tells WardsAuto.

At a recent media event here, ZF engineers say next year the German supplier will deliver to an automaker a new system that can pivot the rear wheels up to 7 degrees. Pushing the envelope further, ZF has enabled AKC to articulate the rear wheels up to 15 degrees, which would vastly tighten the turning circle of any vehicle.

But 15 degrees of articulation requires large wheel wells – the kind found on pickup trucks – so the tires do not scrape on fenders when fully turned.

To demonstrate the potential gain in agility, ZF has equipped a Ford F-150 with AKC capable of pivoting the rear wheels up to 12 degrees in either direction, reducing the turning circle from 48 ft. to 38 ft. (14.6 m to 11.6 m), roughly the same as a Ford Escape CUV.

On a tightly pyloned course designed to simulate the cramped spaces of an airport parking deck, the F-150 is driven first with the AKC system turned off. Three-point turns are common just to complete the course, and a number of pylons are clipped nonetheless.

With the system active, the rear end swings around freely, enabling the huge pickup to center easily in narrow parking spaces and maneuver through the identical series of chicanes with astonishing ease.

“It depends on the driving situation the customer wants,” says Christoph Elbers, ZF’s vice president-Car Chassis Technology Development. “If you really want to improve like we did with the F-150, we have the ability to do it. We can do it with 15 degrees (of steering angle).”

ZF is talking with several customers interested in using AKC on trucks, but the first will not appear in production until about 2021, Peter Buckermann, ZF’s vice president-Product Line Mechatronic Systems, tells WardsAuto.

For a vehicle such as a fullsize pickup with a solid rear axle, Elbers says AKC would require an additional steering axle and electronic controller, as well as a knuckle with two ball joints for each wheel. The system uses energy only when the steering wheel is turned.

The prototype F-150 is programmed to steer the rear wheels out of phase at speeds up to 28 mph (45 km/h) and in phase when going faster. But in sportier vehicles that already have been using AKC, the threshold for that switch comes at a higher speed, about 37 mph (60 km/h).

ZF produces AKC at its plant in Lebring, Austria, and earlier this year surpassed 100,000 units delivered to customers since 2013. Of the first 100,000 units produced, 60% were dual-actuator versions with one electric motor for each rear wheel, for vehicles such as the Porsche 911 Turbo and 911 GT3 sports car, as well as the Ferrari.

Most of the remaining units have employed a single larger actuator positioned between the two rear wheels of vehicles such as the Porsche Panamera, Q7, 7-Series and CT6.

In coming years, ZF says it will crank up AKC production to more than 250,000 units annually.

Beyond increased agility, Elbers says AKC can be paired with brake-based electronic stability control to help a vehicle react more effectively when one or more of its wheels has no traction.

“With ESC, normally you need to brake the wheel that has no grip,” he says. “With rear steer, you can counteract it, and in combination you reduce the braking distance by 6 to 7 m (20 to 23 ft.) just by combining these systems.”

Yet another technological step could connect AKC to a vehicle’s vertical stability by responding to inputs from suspension travel. For Elbers, this approach, now in advanced development phase, is an important step toward autonomous cars that can make their way smoothly down the road without any jostling movements to disrupt occupants.

AKC on trucks also can keep a trailer under control on windy days. “When it gets swaying, we can counter the steering angle in the opposite direction and keep the trailer completely stabilized,” Elbers says.

This isn’t the first time a supplier has attempted to cultivate a niche with rear-wheel steering for pickup trucks.

In 2002, Delphi launched a similar system, Quadrasteer, for fullsize General Motors pickups and SUVs. But it was poorly marketed and exorbitantly priced as part of a $7,000 package.

Over the next two years, the price for Quadrasteer dropped to under $2,000 before the technology was discontinued in 2005.

Steering specialist TRW also was pursuing the same segment at the time and produced a 4-wheel steering system in 2000 for medium-duty commercial vehicles in Europe. Through a partnership with American Axle, TRW also built several rear-steer prototypes, including a Cadillac Escalade.

ZF’s Buckermann says AKC in pickup trucks will be significantly less expensive than Quadrasteer was.