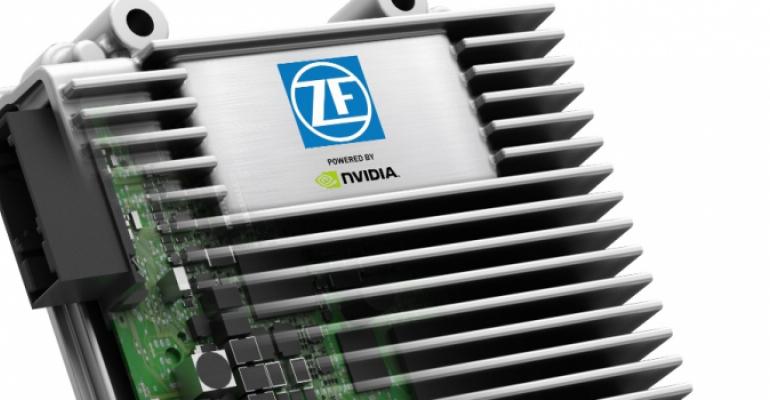 Outpacing the computing power of current automotive-grade processors, the ZF ProAI technology will enable vehicles to understand their environment by using deep learning to process sensor and camera data for highly automated driving, the companies say.

LAS VEGAS – The era of vehicles on autopilot inches closer to reality as automotive supplier ZF pairs with technology specialist NVIDIA to unveil what they say is the world’s first artificial-intelligence self-driving car computer.

Speaking here at the 2017 CES, ZF CEO Stefan Sommer says the ZF ProAI technology will begin series production in 2018, and design work will be complete by year’s end.

Sommer says the scalable architecture will be useful across multiple industries, from mining, farming and logistics to shipping, rail and all types of vehicles.

ZF’s budding relationship with NVIDIA is far from exclusive.

The companies say ZF ProAI can function in extreme temperatures and will be able to understand in real time what is happening around a vehicle, precisely locate itself on a high-definition map and plan a safe path forward.

“It is not exaggeration when we talk about AI as a technology that will spark an industrial revolution, much like steam, electricity and computers did,” Rob Csongor, NVIDIA’s vice-president and general manager-automotive, says at the press conference.

“AI is going to transform everything,” he says, from homes, smartphones and factories to health care, finance and supply management. “Of all the areas, transportation is next.

“The problems in society with people killed in car accidents, lost production caused by traffic jams and lack of time – all these things are immense business opportunities and immense societal problems that can be addressed with artificial intelligence.”

NVIDIA has spent about $2 billion developing the technology over several years.

Sommer says ZF’s current in-house technology, much of it obtained through the 2015 acquisition of electronics and safety specialist TRW, enables Level 2 partial autonomous driving, and the addition of NVIDIA technology will support Level 4 full autonomy by the end of 2017.

The new relationship runs in parallel with, and is meant to complement, existing partnerships with other companies, such as Mobileye, an expert in vision-based driver-assistance systems.

In other product news at CES, ZF introduces X2Safe, a cloud-based intelligent algorithm designed to communicate with vehicles, smartphones and smartwatches to warn drivers, pedestrians and cyclists of potential collisions ahead. Pedestrians, cyclists and motorcyclists account for about half of the 1.25 million deaths caused by traffic accidents worldwide each year, ZF says.

Smartphone users continuously are submitting movement data to the cloud, and an algorithm calculates whether there is a risk of collision with a vehicle or other road users, ZF says. In such situations, a collision warning is triggered both in the vehicle and on the smartphone of the other road user before they have seen each other or before the camera and radar systems onboard the vehicle can detect a dangerous situation.