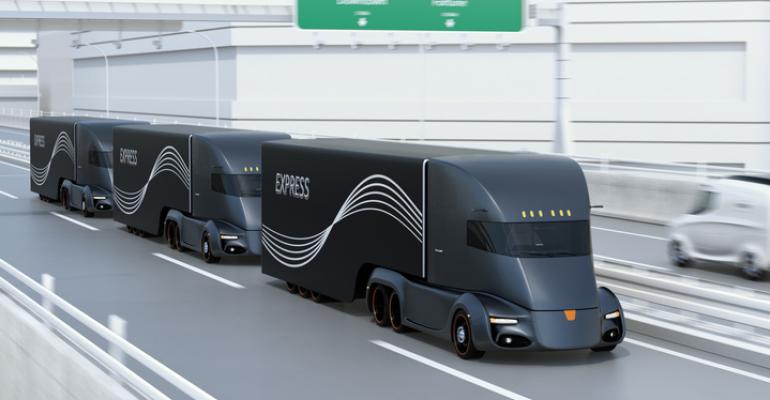 Getty Images
It will be a while before autonomous vehicles deliver, say, pizzas directly to people’s homes, Langan says. “It’s a lot easier to do (autonomous) miles on a highway.”
Vehicles

With no one in a self-driving delivery vehicle, there are no airbags, seatbelts or comfort issues, says analyst Colin Langan. “Bags of potatoes don’t care if it’s a bumpy ride.”

While most autonomous-vehicle startups have focused on ride-sharing applications, analyst Colin Langan argues the self-driving delivery opportunity is more compelling.

Despite industry hype, getting the cost of AV ride-sharing below that of personal car ownership is surprisingly difficult, says the automotive equity research analyst.

Self-driving trucks currently undergoing testing use an advanced system of cameras, lidar and radar. As tested on open roads, they follow a lead truck operated by a driver.

Langan foresees them delivering to hubs off freeway ramps rather than winding through traffic while going door-to-door.

“You’re not trying to maneuver around groups of people with the possibility of one of them stepping in front of the vehicle,” he says at a Society of Automotive Analysts webinar entitled “Will the First Autonomous Vehicles Deliver Packages, Not People?”

Consequently, it will take time before autonomous vehicles deliver, say, pizzas to people’s homes. “It’s a lot easier to do (autonomous) miles on a highway,” Langan says.

Companies such as Uber are testing autonomous vehicles for ride sharing, but he notes those vehicles must provide occupant comfort and safety. An autonomous truck doesn’t.

“With no one in the delivery vehicle, there are no airbags, seatbelts or comfort issues. Bags of potatoes don’t care if it’s a bumpy ride.”

Commercial trucks make up 15% of vehicles on the road today but account for 25% of miles driven, about 1.1 trillion (1.8 trillion km).

Langan, a certified public accountant as well as a researcher, says he’s “not bearish” on the prospects of autonomous ride-sharing vehicles. “But they have their challenges.”

The math is better for autonomous-delivery-vehicle use, he says, citing eliminated driver costs, higher utilization and faster deliveries without the need for driver rest stops.

Despite such prospects, “there is a surprising lack of attention to the delivery market” when it comes to autonomous vehicles, he says.