/sites/all/themes/penton_subtheme_wardsauto/images/logos/footer.png
Recent
Recent
Ford Goes Off-Road With New Explorer Timberline SUV
May 05, 2021
Nissan Holds Top Spot on Most-Seen Auto Ads Chart
May 05, 2021
Chip, Inventory Shortages Impact Dealer Advertising
May 05, 2021
EVs and What Automotive Industry Must Learn – and Unlearn
May 05, 2021
Autoline Daily 2021: Top Industry News for May 4
May 04, 2021
Featured
In-Car Entertainment: Who Wins, Who Dares?
Feb 01, 2021
With Eye on Future, MSU Forms Mobility Advisory Council
May 04, 2021
‘People Still Want to Go to the Car Dealership’
May 04, 2021
Ford, BMW Invest in Developer of Solid-State EV Batteries
May 04, 2021
Do not use
brought to you by 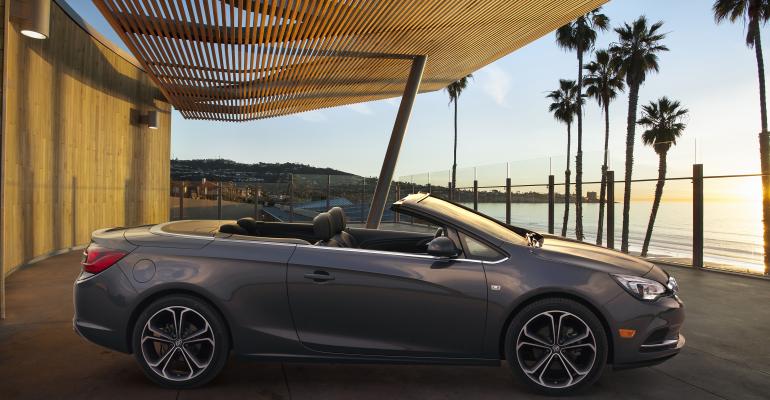 The Cascada has been expected to join the Buick lineup since it launched as an Opel at the 2013 Paris auto show.

DETROIT – General Motors today unwraps the first convertible for the Buick brand in a quarter-century with the turbocharged 4-passenger Cascada.

Featuring a 1.6L 4-cyl. engine and 6-speed automatic transmission, the ’16 Cascada’s 2+2 configuration will comfortably seat four adults, GM says. It arrives at U.S. dealers in early 2016 as the first Buick droptop since the ’91 Reatta.

“It’s a car that will delight customers with its fun spirit and help drive the momentum that’s fueling Buick’s success,” he says in statement ahead of an unveiling here on the eve of the North American International Auto Show.

The retooled lineup, which has shifted focus in recent years from large, plush driving sedans to sporty premium-leaning entries, pushed the brand’s sales up 11.4% in 2014 to 228,963 units, according to WardsAuto data. Last year marked Buick’s biggest sales year since 2006 and capped five years of rising market share.

The Cascada’s 1.6L turbo is part of new family of midsize gasoline and diesel engines rolling out at Opel, which has seen relatively successful sales of the convertible over some 13 months, and one element of GM’s €4 billion ($4.7 billion) reinvestment in the German brand.

The engine, built in Szentgotthard, Hungary, features technologies such as direct injection and variable valve timing to make 200 hp and 206 lb.-ft. (280 Nm) of torque. An “over-boost” feature pushes torque ratings to 221 lb-ft. (300 Nm) for brief spurts of sporty power. The engine also does duty in the Opel Astra compact car and Zafira Tourer MPV.

The steering system is a rack-mounted, electric variable-assist rack-and-pinion unit, and the braking system is a 4-wheel disc variety with ABS and stability control. The Cascada rides on 20-in. aluminum wheels.

However, the primary attraction of the Cascada will be its convertible roof, which drops in 17 seconds and at speeds of up to 31 mph (50 km/h).  Expect excellent thermal and acoustic properties to impart driving comfort, GM says.

“(The) Cascada’s driving enjoyment is rooted in technologies that make it more comfortable and refined,” Aldred says. “Its features work harmoniously to provide a safe, connected and confidence-inspiring driving experience.”

Connectivity highlights include Buick’s IntelliLink infotainment and navigation system, which is accessed by a 7-in. (18 cm) color touchscreen. It will receive text-message alerts and uses Siri Eyes Free technology for Apple phones. OnStar 4G LTE with built-in Wi-Fi hotspot is available.

The rear decklid opens to accommodate the folding soft top, using an electro-hydraulic system with a multilayer construction that includes acoustic and thermal barriers for 4-seasons comfort.

The cabin of the Cascada features an instrument panel wrapped in soft-touch material and authentic stitching. Heated front seats and a heated steering wheel further enhance comfort in cooler conditions.

The Gliwice, Poland-built Cascada has been expected to join the Buick lineup since it launched as an Opel at the 2013 Paris auto show. The Opel model has been relatively successful, too, racking up 5,600 deliveries in targeted European markets through November 2014. It is the second-best seller in its segment, rivaling the longer-running Peugeot 308 and Renault Megane convertibles.