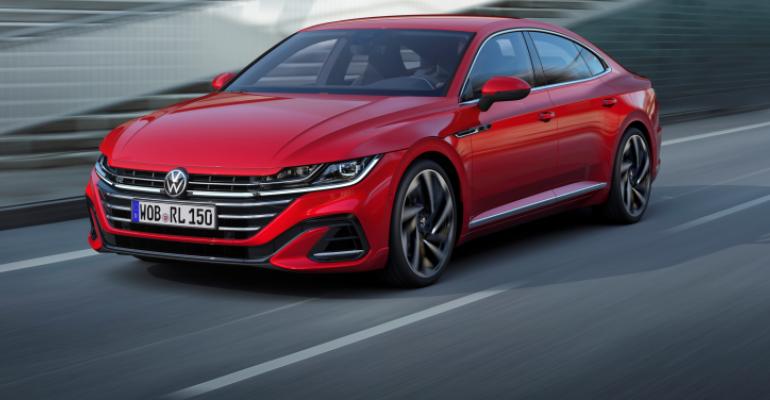 VW’s strategy for the new model is to add content and try to keep price increases to a minimum. New in the interior are the instrument panel, air outlets, center console and upper door trim. Fabrics and leather have been upgraded.

For the U.S. market, the ’21 Arteon is an unusually quick facelift. In Europe, the Arteon is three years old, and coming due for a mid-cycle update. But it only arrived in the U.S. a year ago, following a nine-month delay to get the U.S. model homologated.

The Arteon is a coupe-styled, four-door hatchback. It’s the VW brand’s halo passenger car, successor to the stylish Volkswagen CC. To date, Arteon sales are slow. In the first quarter, VW says it sold 788 units.

Starting last April, Arteon sales were 2,449 in 2019. A common criticism of the original Arteon is that the interior doesn’t live up to the upscale exterior.

In a virtual press conference, Hein Schafer, senior vice president for product marketing and strategy for VW of America, says the company aims to avoid mistakes it made with the initial Arteon launch.

That starts with increasing the marketing and incentive spend on the facelifted ’21 model. He says the Kia Stinger and Infiniti Q50 are the Arteon’s most direct competitors, followed by the Nissan Maxima and Acura TLX.

VW’s product planning strategy for the new model is to add content – especially to spiff up the interior – and try to keep price increases to a minimum, Schafer says.

U.S. pricing for the facelifted model will be announced closer to the on-sale date, currently planned for November, the company says. The ’21 Arteon powertrain – a 4-cyl. 2.0L turbo that produces 268 hp and 258 lb.-ft. (350 Nm) of torque, mated to an 8-speed automatic – is carried over from the ’20 model.

That’s an important way VW holds the line on price. Also, the U.S. market gets neither an electric-hybrid version, nor a new “shooting brake” station-wagon body style. Both are new for European markets for 2021. 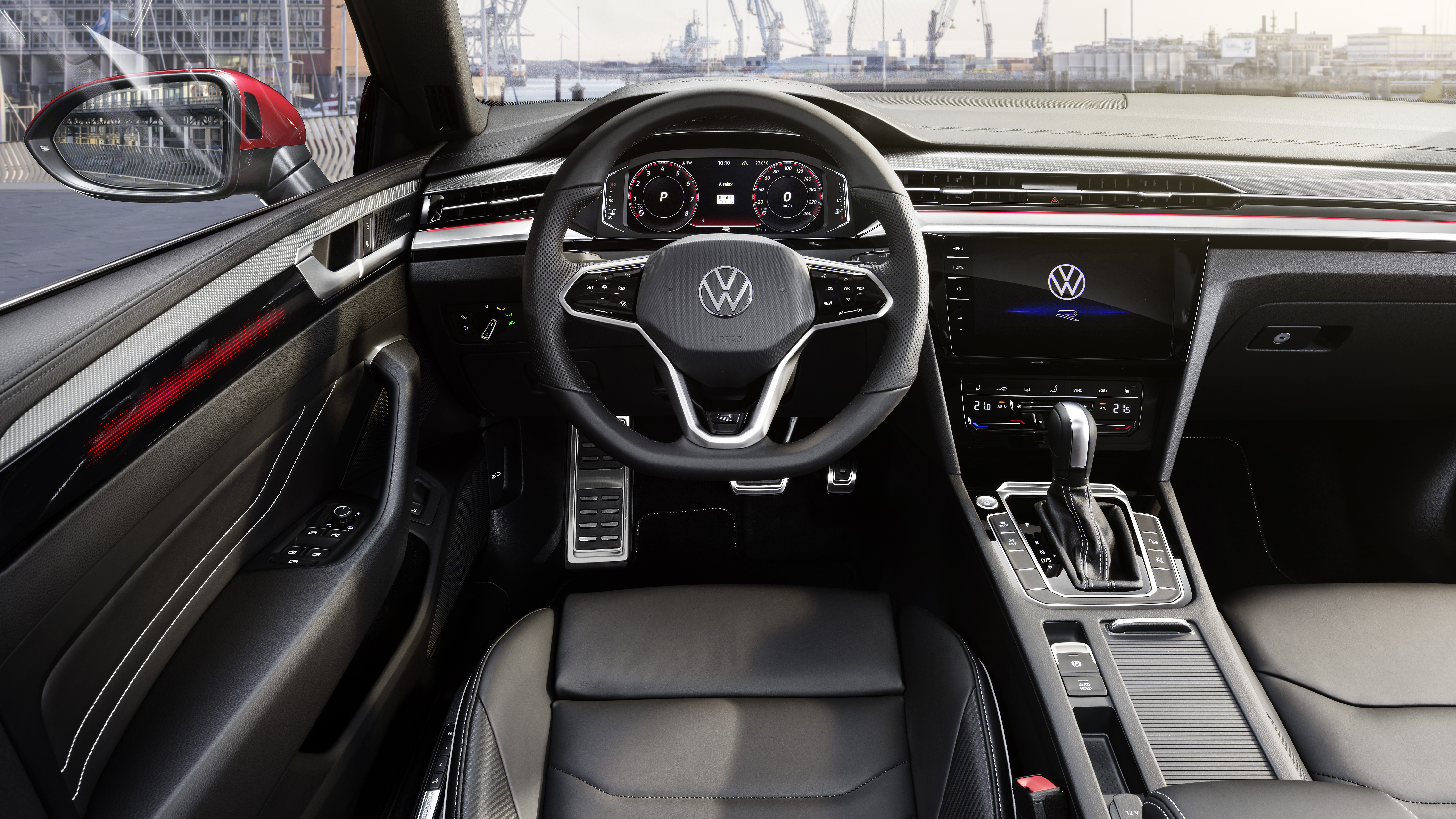 With the facelift, VW of America simplifies its Arteon model offering. The 2021 lineup consists of three variants: the base Arteon SE, the Arteon SEL R-Line and the Arteon SEL Premium R-Line.

Currently, customers have more latitude to mix and match options. For instance, it’s possible to order a base SE model with optional R-Line trim and equipment.

All models get a new dash, with redesigned air outlets, center console and the top sections of the door trim. Fabrics, leather (where available) and other materials are upgraded from the ’20 model. The ’21 facelift (pictured above) also includes a new-generation, multifunction, touch-sensitive steering wheel.

All Arteon models also get the latest version of VW’s MIB3 infotainment system, including wireless App-Connect. The base Arteon SE, which is front-drive only, gets a new color choice, Kings Red, also available on higher-spec models.

The top-of-the-line Arteon SEL Premium R-Line adds a new, 20-in. wheel design and an all-new, Harmon Kardon audio system with 12 speakers and up to 700 watts. All-wheel drive is standard.

The new, customizable ambient lighting also comes in the two R-Line models for 2021. “I know that when I drive, I have two daughters, and especially my 12-year-old daughter is very dominant on the setting of the ambient color, so I usually drive around with turquoise,” Muth says.

The exterior gets some styling tweaks front and rear. The lower part of the front end is revised with body-color segments that wrap around the front air intakes. Higher-spec R-Line models get a bottom air intake across the whole front, plus a horizontal light bar that stretches across the grille.

VW executives aren’t shy about comparing the facelifted Arteon to the Audi A5 sportback, which can be in roughly the same price range, depending on options – even though they insist the more mass-market VW brand doesn’t compete with the sister luxury division.

“From a pure value perspective, bang for buck, you’re going to get a lot more out of an equally priced Arteon than an Audi A5,” Schafer says. 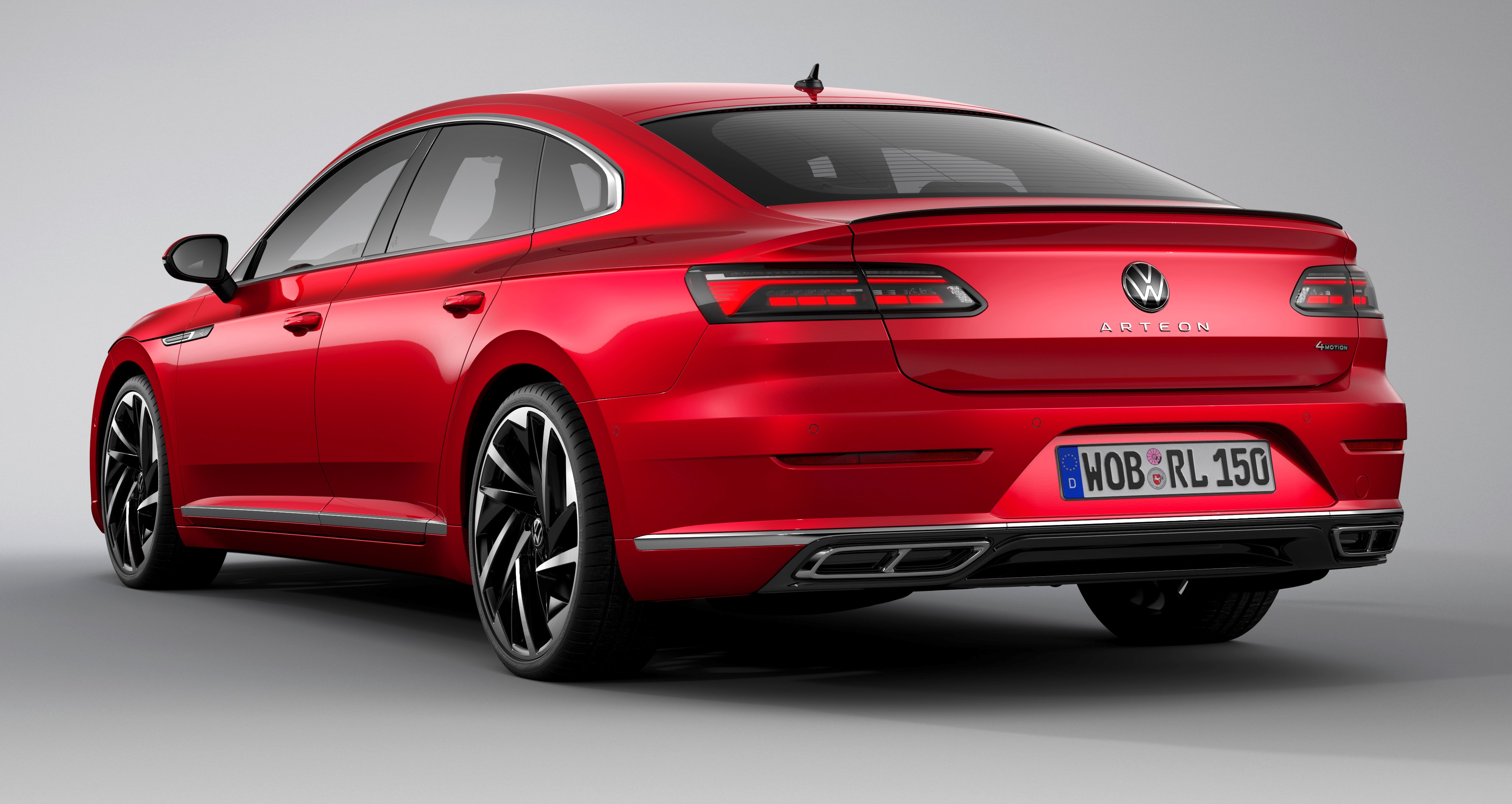