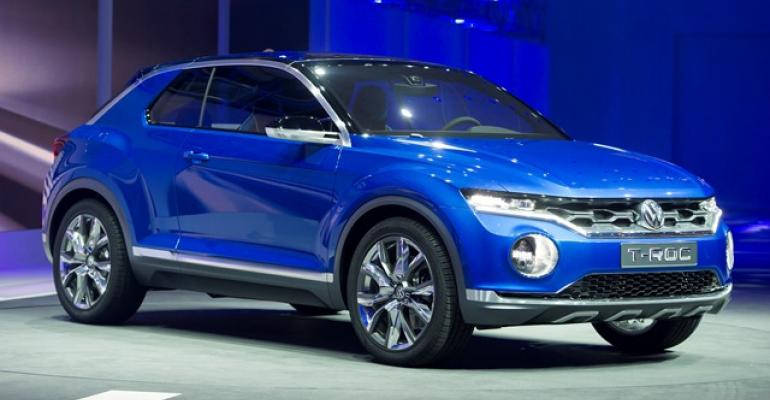 Volkswagen is set to expand its CUV lineup with the addition of a new Golf-based model originally previewed by the T-Roc concept car.

Planned for a world premiere in lightly veiled concept-car form at the Geneva auto show in March, the production model should start arriving in European markets during second-half 2017, according to senior VW officials.

No official statement has been made on possible sales of the new Volkswagen SUV in North America, though the new high riding model will slot into the German automaker’s lineup underneath the Tiguan. The U.S. will sell the long-wheelbase version of the second-gen Tiguan, which will be built in Mexico, and U.S. officials have acknowledged the move up in size for that model may create room in the lineup for a new smaller CUV.

Earlier reports suggested the new VW CUV would eschew the T-Roc name for a more conventional nomenclature. A copyright application made in 2014 reveals Volkswagen registered alternatives, including Teracor, but VW-brand boss Herbert Diess now says the T-Roc name will be retained for the production version.

Unlike the original concept revealed in 2014, the production version of Volkswagen’s latest SUV is planned to receive a fixed roof, not a targa top. While adopting typical VW design elements, the new SUV will sport a uniquely styled steel body.

Like the Golf and Tiguan the T-Roc is based on Volkswagen’s versatile MQB platform. It is expected to come with a wheelbase similar to the Golf at 103.9 ins. (2,639 mm), or some 1.6 ins. (41 mm) shorter than the standard Tiguan.

Inside, the production T-Roc is to adopt the same dashboard and features as the newly unveiled facelifted seventh-generation Golf, complete with an optional high definition Active Info Display instrument pack and 9.2-in. (23.4-cm) infotainment monitor supporting touch, speech and gesture control.

Among the engines set to power the new VW is the automaker’s turbocharged 1.0L 3-cyl.  TSI gasoline engine with output of 113 hp, as well as the new turbocharged 1.5L TSI 4-cyl. Evo units unveiled in the facelifted Golf boasting 128 hp and 148 hp.

Also planned is a turbocharged 2.0L 4-cyl. gasoline engine that will provide the basis for T-Roc GTi with up to 242 hp.

The diesel lineup will include updated versions of Volkswagen’s 1.6L and 2.0L 4-cyl. engines, Diess describes as being “cleaner than most from rival manufacturers.”

Alongside front-wheel drive, selected T-Roc models also are planned to offer all-wheel drive, in some cases as standard equipment. Gearboxes will include a base 6-speed manual and optional 7-speed dual-clutch automatic.

Also under development are plug-in hybrid and all-electric versions in respective T-Roc GTE and E-T-Roc models. They are planned to share their drivelines with the Golf GTE and E-Golf, the latter of which adopts a larger battery for the ʼ17 model year in a move claimed to provide it with a range of up to 186 miles (299 km).

The T-Roc is one of three new SUVs to be added to the Volkswagen lineup before the end of 2019. The larger Atlas, which is reserved primarily for the U.S. and Chinese markets, made its debut late last month. An even smaller model previewed by the T-Breeze concept at this year’s Geneva auto show and based on the upcoming new Polo is to go into production by 2019.