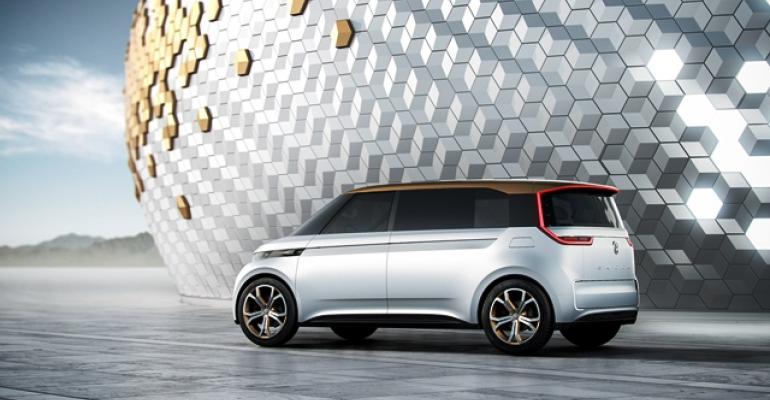 Sources close to the German automaker describe it as a future relevant concept with modular architectural and technical solutions.

Volkswagen prepares to resurrect the Microbus as a contemporary electrically powered MPV boasting a theoretical range of up to 311 miles (500 km) and saddled with the latest autonomous-driving functions.

Sources close to the German automaker describe it as a future relevant concept with modular architectural and technical solutions.

The latest take on the iconic Microbus is among a series of new concepts hatched by a team of VW engineers led by development boss Frank Welsch. Unconfirmed at this stage, it is said to be one of up to five dedicated electrically driven models tentatively chosen to spearhead the company’s entry into the segment at the end of the decade.

According to Volkswagen insiders with knowledge of the secret project, the 7-seat MPV leverages the same flexible MEB platform as the 5-door I.D. concept. The I.D. battery-electric hatchback was revealed at the Paris auto show in September and confirmed for launch in 2019.

The MEB structure, which places a liquid-cooled lithium-ion battery within the floorplan to enable a completely flat floor, has been modified to suit the characteristics of the new Microbus with a longer wheelbase and wider track than those seen on the I.D.

The new architecture was developed independently of the structures to be used by VW Group companies Audi and Porsche in upcoming production versions of the e-tron quattro SUV and Mission E sedan.

The latest Microbus also is claimed to benefit from the same space-saving driveline layout as the I.D., with a power electronics package situated up front and a 122-kW (164 hp) electric motor mounted low and rearward within the rear axle assembly.

As with the I.D., the modern-day Microbus is planned to offer standard rear-wheel drive. Alternatively, it also is claimed to support all-wheel drive with the aid of a so-called electric propeller shaft and smaller satellite electric motors mounted at the front to power the front wheels.

The driveline layout closely mirrors that of the original Microbus, which used a Beetle-derived platform featuring a rear-mounted, air-cooled 4-cyl. boxer gasoline engine and RWD. Its spiritual successor, the Multivan, receives a front-mounted engine and standard FWD.

Although unconfirmed, computer simulations reportedly reveal an expansive floor area in the Microbus concept with sufficient space for a battery large enough to endow it with its substantial range.

Drawing on the proportions of the original Microbus launched in 1950, the concept is described as carrying a blunt front end, extended roofline and upright rear end in a layout aimed at maximizing interior space. It also is claimed to revive a number of exterior design elements from the classic model, including its upright windshield and distinctive side window graphic.

With an overall length around 193 ins. (4,900 mm), the reborn Microbus is said to be a considerable 16 ins. (400 mm) shorter than the latest, seventh-generation Multivan.

However, the new MPV concept is claimed to offer interior accommodations comparable to its more conventional, internal-combustion commercial vehicle sibling with seating for up to seven. Rear luggage space is described as more than adequate.

Further details remain under wraps, but sources say early packaging mockups of the new MPV suggest it likely will feature a classic Microbus body design with two conventional front hinged doors, a curbside sliding door for second-row occupants and a third row of seats ahead of an automatically opening tailgate.

Additional features set for inclusion on the new Microbus include high-definition instrument and infotainment displays together with head-up display technology and autonomous-driving functions, all of which are being developed for inclusion on VW’s upcoming EV lineup.