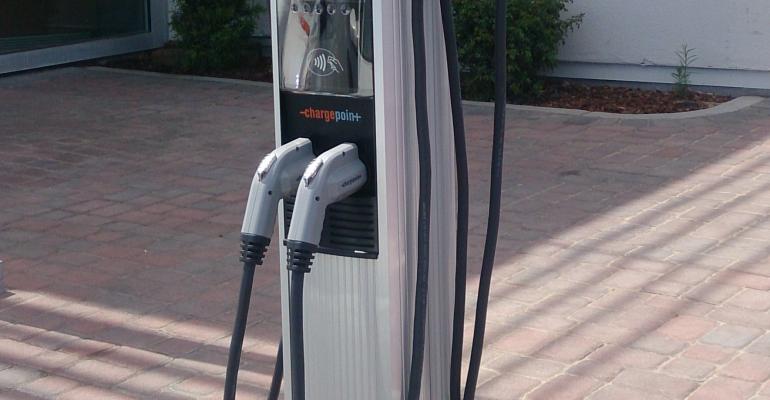 The plan calls for the charging stations to be in place along I-95 between Boston and Washington on the East Coast and along a route from Portland, OR, to San Francisco, Los Angeles and San Diego on the West Coast by the end of the year.

Volkswagen, BMW and ChargePoint are teaming up to install 100 DC Fast charging ports for electric vehicles in heavily trafficked corridors along the U.S. East and West Coasts.

The plan, to be revealed today at the Washington Auto Show, calls for the charging stations to be placed along I-95 between Boston and Washington in the East and along a route from Portland, OR, to San Francisco, Los Angeles and San Diego in the West by the end of the year.

The network of fast chargers, which can replenish 80% of an EV’s battery in 30 minutes, is aimed at facilitating longer-distance travel with such electric cars as the BMW i3 and VW e-Golf.  Each station will include up to two 50-kW DC Fast Chargers or 24-kW DC Combo Fast chargers, both with SAE Combo connectors.

Each location also will include more conventional Level 2 charging stations.

The new outposts will further bolster ChargePoint’s network of more than 20,000 charging stations in North America.

Jorg Sommer, vice president-product marketing and strategy says the plan will “create a seamless experience for the consumer. The investment in the express charging corridor will provide e-Golf and other electric-vehicle owners with the added support to travel their day-to-day and popular long distance routes.”

Each station will be accessible with a ChargePoint or ChargeNow card or via Chargepoint’s mobile app.

“With strategically-placed stations where drivers need them, these express charging corridors will give EV drivers the freedom to go farther and have an EV as their only car without limitation,” says ChargePoint CEO Pasquale Romano.

Installations already have begun on the West Coast in San Diego County.

Size of the investment was not revealed ahead of today’s announcement at the auto show.