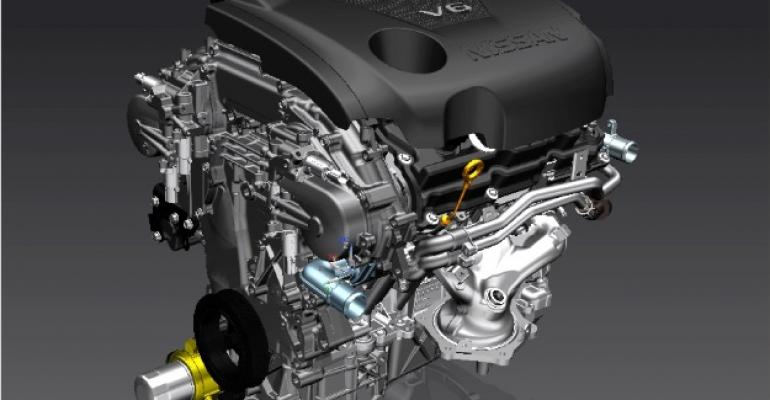 Nissan&rsquo;s VQ V-6, lauded since it came to the U.S. in 1994, has been heavily revised for the all-new Maxima sedan arriving now in showrooms. The automaker calls the VQ all-new as well, but many of the key specs carry over.

Nissan calls the 3.5L V-6 in the eighth-generation ’16 Maxima sedan all-new, but is it really?

The heralded VQ engine family is a tree with many branches, each one representing a variant delivering more displacement, power or sophistication than versions that had come before.

Introduced in 1994, the VQ has come in sizes ranging from 2.0L to 4.0L in Nissan, Infiniti and, more recently, Renault vehicles.

But the U.S. applications have tended toward the larger versions, starting with the 3.0L in the ’95 Maxima, an engine so thrilling and refined that it inspired creation of the Ward’s 10 Best Engines competition.

Then came grunty 3.5L and 3.7L variants pulling duty in everything from Infiniti hybrid luxury sedans and Z roadsters to Quest minivans and Murano utility vehicles.

Along the way, the VQ racked up 14 consecutive Ward’s 10 Best Engines trophies and remained the heart and soul of the Maxima, an upsize front-wheel-drive sedan with a rabid following.

That’s true for the new Maxima, arriving now in showrooms, and product planners point to a host of upgrades in claiming this version of the VQ has been enhanced like no other.

There’s a fully redesigned cylinder head with new intake ports to promote better combustion, as well as an intake manifold with wider and shorter runners to improve airflow.

A stiffened oil pan reduces engine vibration and mitigates noise. Sodium-filled exhaust valves draw heat from the head through the stem to reduce combustion temperatures, which is said to improve fuel economy and performance.

But that doesn’t make this VQ a clean-sheet engine.

Still in place is the conventional port fuel injection as Nissan resists the industry trend toward direct injection, at least in the case of the VQ.

However, Nissan says the ’16 VQ consistently produces more torque at low- and midrange engine speeds. Stellar midrange throttle response has been the VQ’s calling card from the beginning.

The powertrain team focused heavily on the heads, redesigning the exhaust camshaft and adding intermediate locking variable timing (VTC) on the intake camshaft, Jayamohan says. The previous engine used it only on the exhaust side.

“We’re calling it a new VQ,” he tells journalists in Plymouth, MI, at a recent media drive of the new Maxima.

Asked later why Nissan did so much work on the VQ but opted not to change the block, Jayamohan tells WardsAuto the program target was to reach 300 hp and combined fuel economy of 25 mpg (9.4 L/100 km).

“The team ascertained that the best route to achieving those goals was via the cylinder head and other changes we made,” he says in an email. “Could we have changed the block as well? Absolutely. But typically we’d change the block if we wanted to change displacement. That wasn’t deemed necessary by the team to hit our targets.”

Reducing displacement would have resulted in less midrange thrust, and more would have hurt fuel economy.

The new Maxima is longer, with more passenger and cargo space, than the previous car, but curb weight is down 82 lbs. (37 kg), making it the lightest in its class, Jayamohan says. He cites the Toyota Avalon and Acura TLX as prime competitors.

“So again, the need to redesign the block wasn’t as strong,” he says.

The EPA classifies the Maxima as a midsize sedan. WardsAuto places it in its Upper Middle car segment along with the Buick Regal, Mercedes CLA and Subaru WRX, among others in the near-luxury sphere.

Perhaps the most dramatic improvement comes in the EPA fuel-economy ratings. The Maxima’s previous numbers were 19/26 mpg (12.3-9 L/100 km) city/highway.