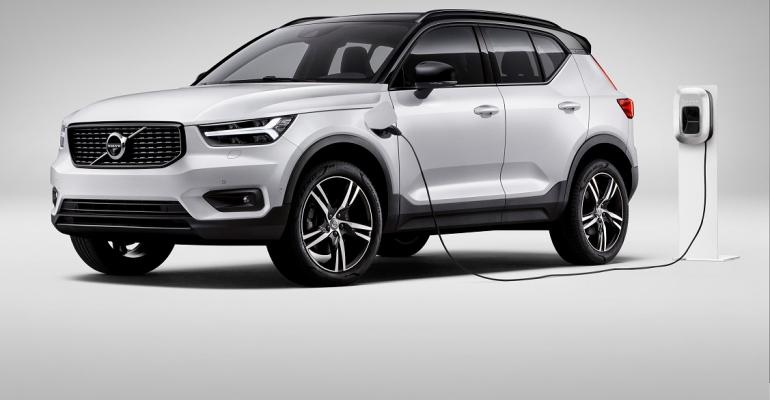 Volvo CEO: Our EVs Will Be Profitable Right Away

The Swedish-Chinese automaker’s first EV is expected to be an all-electric version of its new XC40 compact CUV.

RIDGEVILLE, SC – Volvo Cars plans to introduce its first fully electrified vehicle at the end of next year, and the automaker’s CEO vows that even at a relatively inexpensive price point, it will be a money-maker.

“From day one (it will be profitable). I think we will have no intention or ambition to sell electric cars with losses,” Håkan Samuelsson tells media during an interview here at the automaker’s new U.S. vehicle-assembly plant.

The Swedish-Chinese automaker’s first EV is expected to be an all-electric version of its new XC40 compact CUV.

When asked if Volvo can profitably sell an EV “in the $50,000 range,” the CEO says yes. “We are planning that should be a profitable car.”

Volvo’s next-generation XC90 CUV, to be built for U.S. buyers at this plant in 2021, also will offer a full electric variant, as well as Level 4 autonomous technology, Samuelsson says.

He notes Volvo’s electrification strategy is to offer autonomous technology, expected to be pricey and thus off-putting to many vehicle buyers, on its highest grades in a given model’s lineup.

Samuelsson says the automaker will be able to profitably sell EVs because it can share development costs with Polestar. “So we can carry back the technology into Volvo and also into lower price brackets. That’s the whole idea,” he says.

Samuelsson acknowledges that while Volvo’s fully electrified models will cost more to develop than internal-combustion-engine models, those costs will go down.

By 2025, the year when Volvo has announced it wants half of its global sales to be fully electric models, battery-electric vehicles should reach price parity with ICE vehicles, says a 2017 forecast from UBS.

Volvo already has partially electrified vehicles, with PHEV variants of nearly every sedan, wagon and crossover model in its U.S. lineup, save for the V90 large wagon and the XC40, although plug-in versions of each are expected.

Of the autonomous tech due on the next-gen XC90, Volvo’s Henrik Green, senior vice president-R&D, says it is designated Level 4 and not 5 because it will operate only in limited, geofenced areas. Geofencing, or reining in a vehicle to operate autonomously just on specific routes, is a principle of Level 4 autonomy, whereas vehicles with Level 5 systems in theory can operate on any road.

Samuelsson says Volvo at the moment only sees value in fully automated, high-speed systems. “A very slow car? We don’t see any market for it,” he says, defining Volvo automated technology as Pilot Assist for supervised driving (available now) and autopilot for unsupervised driving.

“(They are) very different products,” he says, describing the former as a system that can “give you additional comfort but you are always responsible for what happens.”

The next step is more like a leap. “Now you can really sit back and relax and we build the car, and we guarantee that these cars can recognize everything that could be out on the road and also be capable of reacting in the right way to those objects,” Samuelsson says.

While he notes the next-gen XC90 with Level 4 autonomy will be built here in Ridgeville, it is unclear if the technology will be available in the U.S. Audi is unable to offer the A8’s Traffic Jam Pilot in the States due to U.S. regulations, such as a 1971 law in the state of New York that requires a driver to keep one hand on the wheel at all times.

Volvo is avoiding Level 3 autonomous systems, which are hands-off, eyes-off, but only sometimes mind-off systems. The CEO calls Level 3’s “middle-territory” autonomy “dangerous,” because human drivers are too slow to react to possible scenarios not thought of by engineers programming the systems.

“You cannot expect (a driver) to jump in (and resume control) when there is something the engineers have really not covered,” he says.