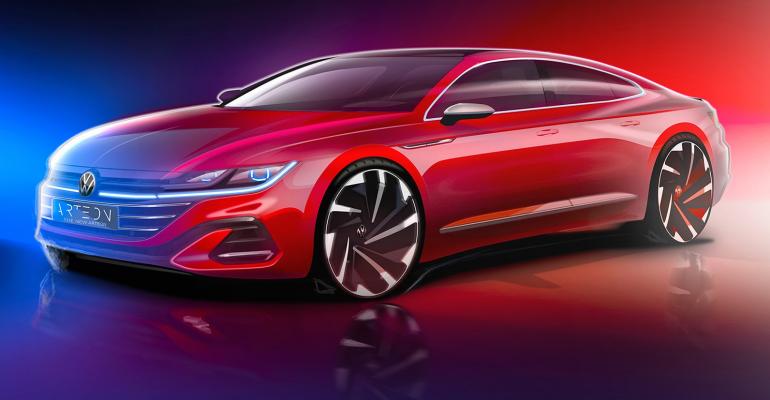 Among the changes coming to the three-year-old Arteon is a new-look grille housing a full-width lighting strip within a heavily reprofiled front bumper.

Volkswagen reveals the altered front-end appearance of its 2021-model-year Arteon in a sketch generated by its in-house design operations ahead of a planned June 24 unveiling of the upgraded fastback.

The facelifted Arteon will be revealed at the same time as the all-new Arteon Shooting Brake, which will not be sold in North America, according to information provided to Wards by the German automaker.

Among the changes coming to the three-year-old Arteon is a new-look grille housing a full-width lighting strip within a heavily reprofiled front bumper.

Volkswagen Group design chief Klaus Bischoff says, “With the Arteon Shooting Brake we have created a new balance between speed, power and space.”

Along with the exterior design changes, Volkswagen says the Arteon lineup will benefit from “comprehensive upgrades…with new high-tech drives and intelligent comfort and assistance systems.”

The interior will receive a newly designed dashboard and added functions, including Volkswagen’s MIB3 infotainment system.

The facelifted Arteon fastback to be sold in the U.S. will have a turbocharged gasoline engine with 48V mild-hybrid system. A hot version from Volkswagen's R division will arrive later, powered by a 300-hp-plus evolution of the automaker’s turbocharged 2.0L gasoline 4-cyl.

The new Arteon will introduce more intelligent assist systems. Travel Assist is designed with long-distance journeys in mind and will “take over steering, acceleration and braking up to speeds of 130 mph (209 km/h) under the control of the driver.”