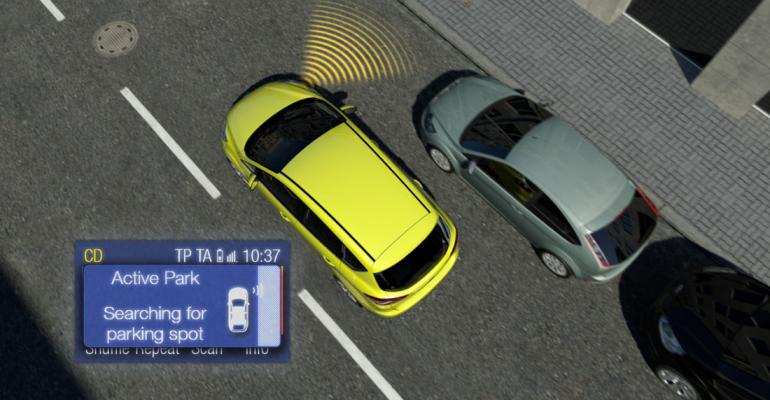 Deliveries of automotive sensors, particularly cameras, which are used on a number of vehicle safety and convenience features are projected to grow at a brisk pace over the next six years, says London-based ABI Research.

The firm predicts shipments of cameras to automakers will reach 197 million annually by 2020, with suppliers such as Aptima, OmniVision and Sony filling most of the orders.

While radar will remain a key technology, cameras will be the primary driver behind the proliferation of advanced driver-assistance systems due to their lower cost and flexibility, Bonte says.

“Radar is still expensive and less flexible to get granularity and recognize what is ahead of you,” he tells WardsAuto. “Cameras have a disadvantage in dark or bad weather, but they are good under most circumstances and are powerful and cheap.”

The applications for sensors are numerous and are expected to increase in use as automakers begin to offer advanced driver-assistance and safety systems on low-end vehicles.

“As (sensor technology) finds its way into low- and midrange vehicles, volumes will increase and prices will drop,” Bonte says. “Within five years sensor prices will drop even further and cameras might drop from $30 (per unit) to $10.”

Bonte adds automakers are researching a number of new sensor-based technologies, including a camera-based system that ensures there is more than one person in a car as required by most high-occupancy-vehicle lanes.

Another potential application is camera-based side mirrors, something a number of automakers have considered to reduce aerodynamic drag.

“Tesla is lobbying to convince NHTSA to allow them to do that,” Bonte says. “Replacing (side mirrors) with cameras and a display is still not so robust and reliable, but nevertheless it would be two more cameras in a vehicle.”

The expected increase in automotive sensor sales has caught the attention of companies outside the automotive industry, including LG, best known as a producer of flat-screen televisions and smartphones.

“LG is looking at how to leverage its products in the auto industry,” Bonte says. “The big difference is sensors for automotive are much more expensive (than consumer electronic sensors).”

Longer-term, Bonte says the rise of autonomous vehicles will further drive automotive sensor proliferation. In the meantime, the sensors will aid in the development of semi-autonomous driving systems.

“Two years ago everyone was skeptical about autonomous vehicles, but I think that it is changing now,” he says. “We’ve seen Audi, Nissan and Ford making some bold statements and committing to 2020 to have the first commercially autonomous vehicle. Not self-driving, but advanced autonomous driving. For that to happen we need more research and development and advances in auto-sensor technology.”

Augmented Reality May Be Game Changer for Vehicle Interiors
Aug 04, 2014