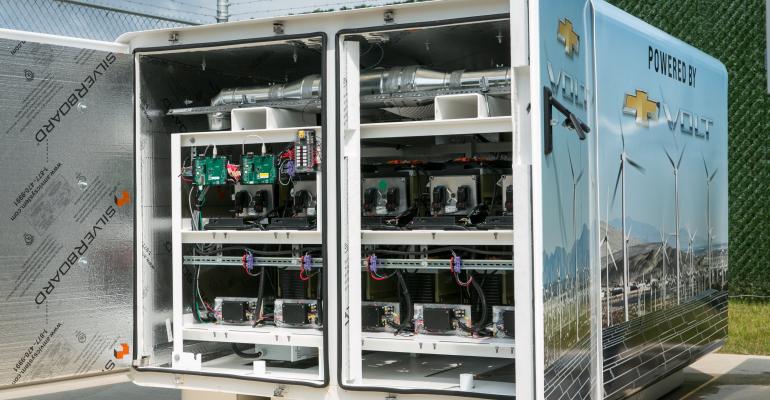 GM has long touted the secondary-use possibilities for the Volt battery packs, suggesting they be repurposed for duties ranging from emergency residential power to industrial applications.

General Motors will hook up lithium-ion batteries from used Chevrolet Volt extended-range electric vehicles to light an IT center at the automaker’s suburban Detroit proving ground, marking the first demonstration of a secondary application for the power packs.

“Even after the battery has reached the end of its useful life in a Chevrolet Volt, up to 80% of its storage capacity remains,” says Pablo Valencia, senior manager-Battery Life Cycle Management at GM.

“This secondary use application extends its life, while delivering waste reduction and economic benefits on an industrial scale,” Valencia says in a statement ahead of the announcement, which was made today at a battery conference in Detroit.

GM has long touted the secondary-use possibilities for the Volt battery packs, suggesting they be repurposed for duties including emergency residential power; industrial applications such as at the automaker’s IT center in Milford, MI; and perhaps even as backup for cellular telephone towers.

In the past few years, GM has demonstrated the possibilities with companies such as ABB and Duke Energy, but the Milford installation will be the first real-world application for the used packs. At Milford the battery packs will send excess power back to the grid.

GM says the Milford battery packs combine with a 74kW solar array and two 2kW wind turbines to provide all of the energy needs for the IT building and light a nearby parking lot. Together, the renewable sources generate about 100 Mwh of energy annually, or roughly equivalent to the energy used by 12 average households, the automaker says. The building’s energy usage is trimmed 17%.

The application remains a bit of an experiment for GM, because it will monitor how the batteries distribute energy at this scale, and together with other industrial partners the automaker will assess additional commercial and non-commercial applications for the packs.

“This system is ideal for commercial use because a business can derive full functionality from an existing battery while reducing upfront costs through this reuse,” Valencia says.

GM estimates a Volt battery pack will last 10 years in the field, and then another 10 years in a secondary application. The battery packs at Milford come from Volt development vehicles, and several but not all of them have been pushed to their limits in an automobile.

GM launched the Chevy Volt in 2010 as an ’11 model with expectation of selling as many as 60,000 annually in the U.S. But the car, while generally acknowledged by critics as a technological leap, faced political headwinds out of the gate, carried a steep sticker price and more recently has been challenged by low gasoline prices in the U.S.

Through May, the first-generation Volt has sold 77,754 units, according to WardsAuto data. A second-generation model with greater EV range and reportedly improved drivability launches later this year.