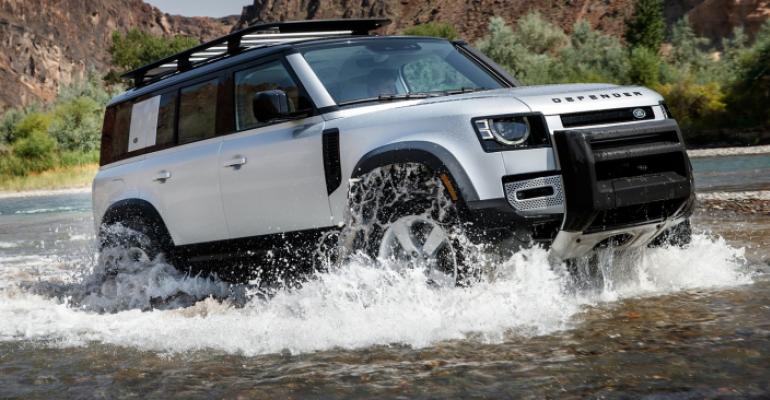 Land Rover
Defender will be first Land Rover vehicle to come with Configurable Terrain Response, which allows drivers to dial in a range of settings.
Technology

The SUV will have a starting price of $49,900 and will feature full-time 4-wheel drive, a twin-speed transfer box and a fully independent suspension.

Last year, we got our first look at the 2020 Land Rover Defender, the first new vehicle to wear that nameplate in the U.S. in 23 years. Now, following an almost complete shutdown during the COVID-19 pandemic, Land Rover says initial deliveries of its all-new Defender 110 have begun.

Though customer deliveries will be limited at the start, the company says every dealer in the U.S. will receive an initial supply for customers.

“After too long of an absence, the Land Rover Defender is once again here in the U.S.,” Jaguar Land Rover North America’s CEO Joe Eberhardt says. “In the coming months we will ramp up availability as global circumstances allow.”

Land Rover claims the new Defender will be its most capable vehicle ever. The SUV will have a starting price of $49,900 and will feature full-time 4-wheel drive, a twin-speed transfer box and a fully independent suspension.

The new Defender will be the first Land Rover vehicle to come with Configurable Terrain Response, which allows drivers to dial in a range of settings to get the best performance for the situation.

The highly customizable Defender will bring new technologies and an entirely new platform to the Land Rover lineup. Underneath, a new all-aluminum D7x platform creates what the company says is its stiffest body ever and claims it is up to three times more rigid than a traditional body-on-frame design.

Inside, a completely new infotainment system runs on a 10-in. (25.4-cm) touchscreen with always-on functionality to provide instant response when starting the vehicle. The Pivi Pro infotainment system will integrate standard Apple CarPlay and Android Auto and can be upgraded with over-the-air updates.

Jaguar Land Rover began shuttering its U.K. factories in late March as it became clear the escalating COVID-19 crisis was not slowing down.

Production resumed in late May, but the company is seeking a more than $1 billion aid package from the U.K. government to help buoy its operations, which saw a 30% reduction in sales for the first quarter of 2020.